Abstract: Several studies have sought to identify the parameters that determine the outcome of balloon dilation in pulmonary atresia with ventricular septum. However, none of these studies was based on the ant colony algorithm. In this paper we focus on the implementation of an algorithm based on ant colonies: Fuzzy Ant-Miner. This method uses the concepts of fuzzy logic to extract rules from the training data. These rules are exploited using a Mamdani fuzzy inference system for classification and prediction. The results obtained by this method in the form of fuzzy rules are easy to interpret, and close to human reasoning.

The decision tree algorithms present the disadvantage of using sequential variables (non-simultaneous). On the other hand, the passage from a tree node to another, divides the attribute into two separate partitions in a sudden manner: noise superimposed on the discretization value can generate errors.

The rest of the paper is organized in three sections:

In order to avoid the crisp discretization used by cAnt-Miner, our method discretizes the values of a continous attribute into fuzzy partitions [3]. First a threshold x is determined in the same way as cAnt-Miner (the one that leads to the minimum entropy). We assume that the threshold is a fuzzy number around x. Then the values of the continuous attribute are transformed into membership degrees to the fuzzy values:

The membership function of the continuous attribute Ai to a fuzzy value Ai << x is calculated using Equation (1) with reference to FIG. 1. 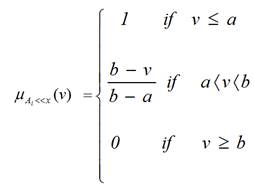 And the membership functions of the continuous attribute Ai to a fuzzy value Ai ≈ x are calculated by the equation (2): 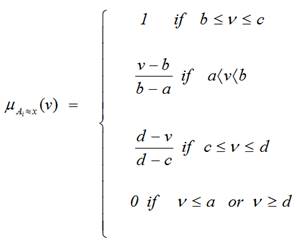 Similarly, the membership functions of the continuous attribute Ai to a fuzzy value Ai>> x are calculated by: 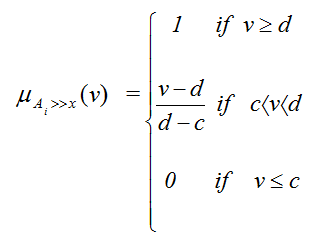 Where parameters (a, b, c and d) determine the boundaries of the fuzzy area and so the degree of fuzziness. These parameters are determined in the same way as the threshold x (value that gives the minimum entropy in a given partition). Note that other ways of generating the fuzzy partitions can be used in our method. 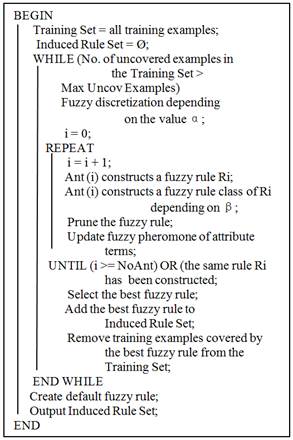 The In order to deal with fuzzy concepts we have extended the algorithm Ant-miner to treat these concepts. The pseudo code of Fuzzy Ant-Miner method is presented in the Figure 2.

The method begins with all learning examples and an empty list of rules. Fuzzy discretization is performed on the fly [10] in the outer loop (While). The inner loop (Repeat. .. Until) finds a fuzzy rule, simplifies and updates the pheromone levels in different terms. This rule will be elected (stored in the list of rules) if its quality is the highest, in this case all the examples covered by this rule will be removed from the training set. A sample is removed from the training set if the rule covers this example with a number greater than a certain degree β. The rule extraction process stops when the training set  contains only a number of examples less than a number entered by the user. The number of iterations of the inner loop is equal to the number of ants if there's no convergence (the same rule found several times).

The eth example Oe of the training set is defined by:

)i=1….n represents the attribute values of the example.

Class of the example.

Each rule rm obtained by our method is defined by

• vj is the fuzzy value

• nr is the number of terms in the rule.

To determine the quality of the fuzzy rule, the examples are injected into the rule:

A TP* value of a training set is:

The fuzzy quality Q* is then calculated by:

Before pruning the rule, the class is determined by the most frequent class among the examples covered by the rule in the training set: The rule covers the example Oe if

The results obtained with Fuzzy Ant-Miner showed an obvious improvement compared to those of Ant-Miner and cAnt-Miner. 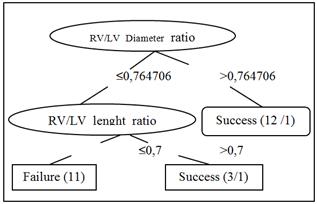 This data set is composed of 26 echocardiograms [1] done on patients diagnosed with PA-IVS who underwent balloon dilatation. Each instance consists of 32 numeric attributes, two nominal attributes and a nominal class that indicates the success or failure of the intervention. The small number of cases of all the data that was provided to us, is the consequence of the fact that congenital heart disease is rare.

The tree generated by the J48 algorithm [1] is shown in Figure 3. This tree has the disadvantage of using sequential variables (non-simultaneous: we must first test attribute:   RV / LV_diameter_ratio), and if a variable changes in the tree, then all the tree changes. On the other hand, the passage from a tree node to another, divides the attribute into two separate partitions in a sudden manner: noise superimposed on the value of discretization can generate errors (eg partitions: RV / LV_diameter_ratio> 0.764706 and RV / LV_diameter_ratio ≤ 0.764706).

The Fuzzy Ant-Miner algorithm uses a fuzzy discretization of continuous attributes and extract rules that will be exploited by using the fuzzy inference systems for classification and prediction [4]. The results obtained by this method in the form of fuzzy rules are easy to interpret, and close to human reasoning. The average predictive accuracy obtained is 0.7862. The results obtained by this method as three fuzzy rules are noted below:

The fuzzy rules 1 and 2 justify the tree generated by the J48 algorithm, while overcoming the disadvantages of decision trees already mentioned. Our approach has generated rule 3 which uses a new term (ratiotm). The attributes contained in the rules are: ratiodiam, ratiolen and ratiotm. The learning examples involving these attributes and their coverage by the rules are given in Table 1.

The fuzzy rules generalized by Fuzzy Ant-Miner algorithm from the training set are used to classify new examples [5]. This classification is based on the principle of fuzzy inference system. Indeed each rule obtained, that involves a fuzzy term from the continuous attribute, has a degree of validity [6]. This degree depends on the fuzzy probabilities. An example filtered by this rule will have the class of this rule with a degree of uncertainty calculated using the principle of generalized modus ponens. The fuzzy inference system used is the SIF Mamdani.

The output class is constructed by aggregating the classes obtained by each rule. We deem that the rules are linked by a logical "OR", and therefore we calculate the maximum of the resulting membership functions for each rule. Since the output is categorical, we affect the class of the rule, with the highest output value, to the injected example.

Table 1 presents six examples injected into our method and whose class is predicted with a degree of uncertainty.

Fuzzy Ant-Miner is an extension to the learning algorithms based on ant colonies in order to process continuous valued attributes. These parameters are discretized on the fly according to the concepts of fuzzy logic.

We got three fuzzy rules by applying the algorithm Fuzzy Ant-Miner on these medical data.

The domain expert has confirmed that the rules obtained by Fuzzy Ant-Miner reflect their way of thinking in the face of confusing situations: that is to say, when the attribute value is exactly equal to the decision threshold.