The Synergism of STM and the Effectiveness of Simultaneous Interpreting

Abstract: STM is the abbreviated form of short-term memory that consciously processes the information in interpreting. As both a buffer and a processor, STM plays an indispensable part in interpreting practices. This study, through live simultaneous interpreting (SI) experiments and observations to the MTI that the researcher has taught in the SI classroom in the College of Foreign Languages and Literatures at Fudan University, analyzes their STM abilities to do SI. The results of experimental research show that the function of STM is increasingly prominent; and moreover, the STM synergism strategy is conducive to enhancing the timeliness and the ten-dimensions of student interpreters in their SI, which consequently expedites the effectiveness.

Cognitive psychologists generally believe that the primary procedures of memory consist of three aspects: encoding, storage and retrieval (Xu, 2008:17). These three aspects are closely interrelated with one another. Concretely, information firstly enters short term memory (STM) in the form of sounds encoding. Meanwhile, priming effect occurred to activate the semantic information stored in long term memory (LTM). Thereafter the activated semantic information will temporarily be stored in working memory (WM) and eventually be transformed to LTM by rehearsal. According to the theory of Levels-of-Processing Framework (Nordhielm, 2002: 371-382/2003: 91-104), the levels of information storage largely depend on the encoded information. Just as the information in computers needs to be artificially classified and put into separate files so as to be retrieved later, information encoding rearranges and assembles messy information in brains to save more memory storage space (Sternberg, 2003). During the whole memory process of simultaneous interpreting (SI) from source language (SL) to target language (TL) (Kang, 2011: 81), information encoding determines success or failure of SI memory (ibid, 2013:30). However, information encoding is not a single link, but includes information option and encoding. Therefore, from super-lingual (ibid, 2012: 106) information option to encoding, the function of STM is more prominent. Only by developing synergism of STM can the effectiveness of SI be enhanced.

STM is short-term memory, which refers to a few seconds or minutes’ retention after memory experience, or information capacity that can be identified and recalled within a few seconds or minutes. External stimulative information activates sense memory through sense channel, then comes into STM. STM is "a buffer and a processor with finite capacity before information comes to long term memory (LTM), and the only memory phase where information is processed consciously. Therefore, STM includes not only two short-term memorizers —— visual and spatial memorizers, but also the central executive which processes limited data and controls the whole system. (Gui, 2002: 48-49)"

If we regard interpreters as a bridge between speakers of SL and listeners of TL, STM is just as a link that connects the encoding of decoded SL information input with the retrieved TL information. Therefore, a good ability of STM is a prerequisite for interpreters to perform excellently during interpreting.

3) Finiteness of capacity in STM: Without rehearsal, information is usually composed of 7±2 chunkings in STM, while any delay or interruption may reduce the capacity of STM from 7 to 3 (Miller, 1956: 81-97). Chunking items can be letters, numbers, words or sense groups; however, no matter what kind of chunking it is, the capacity of STM generally remains 7±2 chunkings (ibid.).

This study, through live simultaneous interpreting (SI) experiments on STM and observations to the MTI that the researcher has taught in the SI classroom in the College of Foreign Languages and Literatures at Fudan University, explores the ablation rate of STM and the various problems occurring in the course of STM. The results are shown as below (Table 1):

[SL] As well as being the centre of Scottish government, located in the new Parliament building, Edinburgh is also the focal point for many of its cultural events. Every August, the east coast city is taken over by the world famous Edinburgh Festival, a month-long celebration of theatre, comedy, dance, books, music and film. Thousands of visitors including hundreds of performers take part in an arts extravaganza. In fact, it's not just one festival but many, including the official International Festival, the Festival Fringe, Book, Film and Art Festivals as well as many others, offering something for everyone. It becomes a badge of honor to sample as much variety as possible, taking in acrobatic acts followed by the premiere of a major new movie, or a challenging new theatre drama followed by a top stand-up comedian.

When interpreters hear "Edinburgh is also the focal point for many of its cultural events. Every August, the east coast city is taken over by the world famous Edinburgh Festival, a month-long celebration of theatre, comedy, dance, books, music and film.", they immediately think of the bustling, vivid scenes of various art celebrations held in Scottish Art Centre, such as theatre, comedy, dance, books, music, film and so on. While these information chunkings which are related and close to one another, such as theatre, comedy, dance, books, music, film etc. all belong to cultural activities. Meanwhile, information expansion among these chunkings contributes to interpreters’ STM; what is more, the processed information only takes up so small a space of STM as to relieve the pressure of STM greatly.

[TL] Premier Li Keqiang of the State council pointed out that in order to enable the China-US dialogue to play a more active role, the two sides should make efforts on the following aspects. // Firstly, we should discuss the overall, strategic, and long-term economic issues, which both countries focus on, from key points and the long-term point of view. // Secondly, both countries should make consultation equally and seek for common ground, fully considering each concern. // Thirdly, we should broaden the interests’ interface with developing point of view and achieve mutual benefit and win-win results. // The fourth point is to deepen understanding, enhance confidence between both sides, and continually expand consensus.

This is a very logical statement basically without any visualization. Logicalization memory method is applicable to such an exposition style, because this statement is clearly expressed from firstly to fourthly. This method helps to develop the mode of logical thinking and logical memory in interpreters’ brain.

5) Information encoding strategy: As mentioned above, the information of STM mainly includes auditory encoding, but not excluding other encoding forms such as visual encoding and semantic encoding. No matter what form is adopted to encode the obtained information; the only goal is to prepare for successfully bringing information into LTM. This means that the speech sounds information of STM must achieve activating effect promptly and activate its corresponding semantic information stored in LTM.

6) STM training strategy: Student interpreters should receive special training of STM attention, auditory sense, visual sense, and semantic encoding in the mode of SI. With the help of this training strategy, students can achieve good effectiveness of STM.

This research did a 15-week tracking experiments on the MTI interpreters of 2014 taught by the researcher in College of Foreign Languages and Literatures, at Fudan University. The experiments in Week 1, Week 3, and Week 5 and from Week 10 to Week 15 took place in Classroom 5113 and Simultaneous Interpretation Laboratory 5207 in Classroom Building Five. The experiments continued five times, and for each SI time was limited to five minutes —— starting timer as soon as the speakers began to read each text. Student interpreters rendered both E-C and C-E SI to test their ability of STM (see Table 2). The experimental contents were "The Secretary-General's Message on World Environment Day on June 5, 2011" and the speech "气候变化与中国" (Excerpt) addressed by Fu Ying, the Chinese ambassador, to UK in London School of Economics (LSE) and so on (Kang, 2013:108-110).

Table 2 illustrates the experimental subjects, places, numbers, interpreting models, language models, contents, and difficulty levels of interpreting products. Although the content in each experiment is different, the SPSS computed difficulty level is between 0.504 and 0.561, with its mean value of 0.541, almost the same. Five Tracking experiments were performed to assess the student interpreters’ STM ability. Thereinto, no STM synergism strategy was implemented in Week 1, Week 3 or Week 5. Since Week 10, the STM synergism strategy began to take effect. The result is presented as follows (see Table 3).

From Table3, it is found that the average accuracy of SI has no obvious difference from Week 1 to Week 3, regardless of E-C interpreting or C-E interpreting. The average accuracy of E-C SI rises to 62.415% from 57.249%, growing by 5.166%, and that of C-E SI rises to 59.318% from 55.082%, growing by 4.263%. These two items above do not show sharp amount of growth. Although growth is sustained at Week 5, the amount of growth is still not apparent. However, in Week 10, due to the application of synergism strategy of STM, the amount of growth rises by 28.667% compared with Week 1 and by 14.512% compared with Week 5, which indicates a considerately large increase. In Week 15, the average accuracy of SI of each item still goes up greatly (see Figure 1). 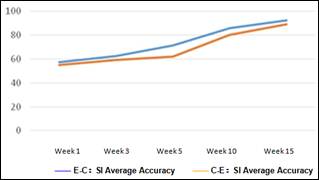 Figure 1 clearly shows the variation of STM ability increase of MTI interpreters with incrementing time of professional training of SI in 15 weeks. Especially after implementing synergism strategy of STM, the increase in Week 10 reached its highest.

In view of the tracking experiments above, the acquired data has been processed by SPSS to identify its significance, reliability, and validity. The results are shown below (see Table 4 & 5).

From the data listed in Table 6, it is found that five experiments are performed and their effective rate is 100%. Table 7 indicates that Cronbach’s Alpha is .995, which shows that the experiment is very reliable.

As revealed in Table 8, the Pearson correlation is .991, which indicates the significance of the two-tailed correlation, in other words, being significantly correlated at .01 level (two-tailed).

Given all the above, this tracking experiment is not only significant (.000) but also highly reliable (.995) and valid (100%). The function of STM becomes more prominent when synergism strategy of STM is applied to student interpreters’ SI. For student interpreters, the crux of SI memory training, especially the training of STM, is firstly to learn to grasp the meaning of information as a whole and cultivate their ability of promptly sorting out the logical outlines of discourses; and secondly to fully exert student interpreters’ spatial imagination and enlarge memory contents of similar information in chunkings. Interpreters’ spatial imagination plays a vital role in memorizing descriptive and logical discourses. Regardless of the logical analyses of discourses or the formation of vivid pictures, all these information processing, information encoding require to be accomplished instantaneously. Information encoding, including auditory encoding, sound image encoding, visual encoding and semantic encoding, determines information retrieval. Hence, the methodization and visualization of information in the brain, as well as the effective role of synergism strategy of STM, is conducive to making the effectiveness of SI more obvious.

The characteristics of STM and interpreting reflect the intimate relationship between STM and interpreting. Interpreting fails to be rendered without STM and effective STM helps to benefit interpreting. MTI interpreters have problems in attention, concentration, selection, capacity and encoding during SI practices. For this reason, introducing synergism strategy of STM in professional training can promote the achievement of better performance in SI timeliness, ten-dimensions and effectiveness.