Abstract: The study of the relation between human behavior and language is probably the most fascinating interests that a scholar can undertake. Actually, human behavior and language have very close, mutual and complex relationships which need exploring more. This paper reports on an ongoing Ph. D research in the light of functional grammar raised by Halliday M.A.K [11]. It aims at presenting (i) the theoretical background of experimental meaning: the system of transitivity and especially behavioral clauses, (ii) the identification of English and Vietnamese verbs that realize process in behavioral clauses with a corpus of English and Vietnamese literary work of the late 20th century and the early 21st century, (iii) a topology of behavioral clauses in English and Vietnamese literary work. When we look at the experimental metafunction, we are investigating the grammar of the clause as representation. To achieve the set goals, descriptive method and functional analysis are thoroughly chosen. Finally, this paper also employs the framework of Martin, Matthiessen and Painter [15], Bloor and Bloor [2] and Eggins [8] to find out more about the subtypes of behavioral processes in English and Vietnamese literary genre.

There have been two major distinctive existing approaches on analyzing Vietnamese clauses. One is influenced by European traditional grammar, especially French grammar. Its analysis is based on Subject-Predicator structure. Many Vietnamese linguists like Phan Khoi [21], Bui Duc Tinh [5] applied this traditional Subject-Predicate structure to analyze Vietnamese clauses. The other is based on Systemic Functional Grammar raised by Halliday[11]. This is a new trend in modern Vietnamese grammar which helps us deal with some difficulties in interpreting and analyzing a clause that traditional grammar cannot tackle. This analysis of the clause is based on Theme-Rheme structure (clause as message), Mood structure (clause as exchange) and Transitivity system (clause as representation). A considerable number of Vietnamese linguists like Hoang Van Van [13], Diep Quang Ban [7], Cao Xuan Hao [6], are completely dedicated to this trend. In addition, many studies have been carried out to explore the nature as well as the importance of experimental meaning in English and Vietnamese. In this paper, we focus on Transitivity system (clause as representation), especially behavioral clauses and their topology in English and Vietnamese. Less attention has been paid to Behavioral processes than other processes due to its complexity and ambiguousness.

2. The Theoretical Background of Experimental Meaning: The System of Transitivity and Especially Behavioral Clauses

How "meaning in grammar" is treated is an interesting question and many linguists and scholars are especially interested in it. According to Halliday [11], there are three types of meaning within grammatical structures namely: Experimental meaning, Interpersonal meaning and Textual meaning. Among them, Experimental meaning has to do with the ways language represents our experience of the world and the inner world of our thoughts and feelings. In other words, we have turned our experience of actions, happenings, feelings, beliefs, situations, states, behaviors and so on, into meaning and into wording. The people and things involved in then and the relevant of circumstances of time, place, manner and so on. Transitivity belonging to experimental meaning is the grammar of experience. It construes the word into a manageable set of Process types and of Participants. Halliday [11] has identified the encoding processes of the realities under discussion, and has also linguistically (grammatically) classified the various process types: material, mental, relational, and the classified other processes into three subsidiary process types: behavioral, verbal, and existential.

Material processes are processes of "Doing". They have an obligatory participant which is the Actor- the doer of the action. A second participant, the Goal of the action, is the optional participant to which the doing is done. There are still other participants which are Goal, Range and Beneficiary.

Mental processes encode the inner world of cognition, perception and affection. They tend to be realized through the use of verbs like think, know, feel, smell, hear, see, want, like, hate, wish, etc. There are two constant participants in a mental process: a Senser and a Phenomenon, even if the Phenomenon is not explicitly realized.

• Attributive: " A is an attributive of X"

• Identifying: "A is the identity of X"

Behavioral processes are processes of psychological and physiological process, like breathing, coughing, smiling, dreaming, chatting, watching, etc. These construe human behavior including mental and verbal behavior as an active version of verbal and mental processes. Saying and sensing are construed as activity. Typically, the participant is a conscious being, like the Senser, but the process functions are more like one of doing. The participant is called as Behaver, such as:

Verbal processes can be identified as the processes of saying which are expressed by verbs tell, say, ask, suggest, etc. Verbal process also includes modes of expressing and indicating, even though they are not verbal. There are two main typical participants in the process: Sayer and Receiver. The Sayer is the addresser, or the one who does the verbalization, and the Receiver is the addressed which the saying is addressed.

3. The Identification of English and Vietnamese Verbs that Realize Process in Behavioral Clauses

These clauses involve three participants. It is safe to say that there is no confusion in identifying Behaver and Circumstance or Phenomenon but great efforts are made to recognize behavioral processes. In addition, the process of centre on that part of clause is realized by verbal but can also regarded as what "goings-on" are represented in the whole sentence. Therefore, it is crucially important to determine the process type and label it in behavioral processes. Process type is the resource of sorting out our experience of all kinds of events into small number of types. Each process is different from each other with regard to the Process itself and the number of participants involved. However, there is a troubleshooting regarding to determining the typical processes realized in behavioral clauses in transitivity system and labeling them accordingly.

(1)You are looking at my cuff button.

In (1), we have a behavioral process "looking at" whereas the process realized by the verb "didn’t see" is a case of mental process. Especially, these types of processes are semantically complete. Let us consider the following examples:

(3)She shivers with cold

(4)She shivers with fear

It is certain that semantically, in (1) "shiver" belongs to physiological process whilst in (2) "shiver" is psychological one. It would be better to have identification criteria for behavioral clauses based on grammatical one instead of semantic. The two probes are suggested to label behavioral clauses as following:

Involving the role of a conscious being but being unable to project like material. PROJECTION is an option for mental and verbal clauses. They can project a clause as the 'content' of the mental or verbal processing and the projected status of this clause is marked by think, say or state. For instance, the following example is a combination of two clauses, a projecting mental one of thinking and another one representing the idea projected by thinking: I think I will go by bus.

The comparison of the suggested probes can be described and summarized in table 3.1.

Table 3.1. The significant differences among the four processes.

4. A topology of Behavioral Clauses in English and Vietnamese

At transitivity level, there are five major process types – material, mental, verbal, relational and behavioral that cover the grammatical and semantic space of happenings, doings, sensing, saying, being, having and so on. There are prototypes cases of all the five major process types and these are the core types of these processes. However, there are more peripheral cases of each process. As a result, it is impossible for us to interpret a clear borderline among these processes. At behavioral process itself, in addition to its prototype cases of psychological and physiological process such as sneezing, dreaming, breathing, stuttering, etc. There are a lot of peripheral cases that mix characteristics of with material, verbal and mental processes. Therefore, behavioral processes also include more mental-like, verbal-like and material – like subtypes. Table 4.1 illustrates the subtypes of behavioral processes.

From this perspective, the subtypes of behavioral processes can be shown in figure 4.1. 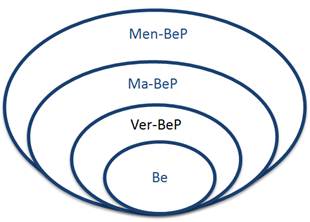 (5)The five miners sighed, bowed, and, trembling with the struggle. [14]

Behavioral process is also exemplified in the following clauses

Most behavioral clauses have only one participant role, the Behaver. However, there may, in some instances, be candidates for a second participant role like in examples (7) and (8) "glaring at her", "stared at each other", "glanced at me".

Let us consider further examples of behavioral process in Vietnamese:

In examples (9), (10), (11), the behavioral clauses are constructed employing the behavioral processes in the form of "intransitive verbs" "rên" ("moan"), "thở dài" ("sigh") and "cười nhạt" ("sneer"). In particular, "rên" ("moan"), "thở dài" ("sigh") and "cười nhạt" ("sneer") are the most common psychological signals of man. There are three main issues raised that – (i) the question of what psychological signals express – (ii) the notion of psychological signals and (iii)- the universality of psychological signals. We will discuss these issues in another paper. In this paper, we would like to focus on Fridlund’s view. Fridlund [10] emphasized the use of behavioral signals for communicative purposes. He also asserts that behavioral signals should be viewed as communicative signals. For example, when you see person sneering, we can encode that the person is behaving in a very obvious way that he is showing no respect for somebody.

Behavioral processes also include more material-like subtypes and therefore, the clause can be probed with "what did the Behaver do?"

Here are some examples of Verbal – behavioral processes

Like mental processes, the blending Mental – behavioral are classified into three classes: perception (verbs of seeing and hearing), cognition (verbs of thinking, understanding, knowing) and emotion (verbs of liking and fearing).