Abstract: The liquid solid fluidized beds have been usually used in catalytic cracking, ion exchange, crystallization, and particle classification. Fluidized bed column has investigated experimentally and numerically. A numerical investigation has been done by using computational fluid dynamic software ANSYS Fluent 15.0. In this study, a spherical stainless steel has used as solid particle fluidized continuously by water. Three different values of water flow rate (10, 15, 20 l/min) have used with three different values of static head of the solid particles (2, 2.5, 3 cm). The pressure of the fluidized bed has been measured at four different location of the test section 20 cm apart and the flow behavior at the test section has monitored by using AOS high speed camera. The experimental data has compared with numerical solution and a good agreement has been found. It can be observed that the expansion of the solid particles and the pressure inside the bed increased as the water flow rate and static bed height increased.

Circulating fluidized beds (CFBs) have been commonly operated in chemical, petrochemical, ion exchange, metallurgical, adsorption, environmental, particle classification, and energy industries for applications such as fossil fuel combustion, coal and biomass gasification, and fluid catalytic cracking (FCC). Circulating fluidized beds have several significant advantages such as increased through-put, in-bed sulfur capture, fuel flexibility, and high efficiencies in gasification and combustion with relatively low emissions of NOx [1-2]. CFB technology is more attractive in the industry of energy than several other systems. Despite its extensive applications, the complex hydrodynamics of CFBs are still not completely understood and difficult to predict, in most applications, the heat and mass transfer between the phases and the chemical reactions make it even more difficult to predict the behavior of CFB reactors [2]. The solid particles placed on porous plate called distributor subsequently the continuous phase forced through the holes of distributor causing the particles suspension in the flowing flow, the solid particles expand in the bed and the expansion increase as the water flow rate increase. The fluidized bed subjected to research a long time ago. Tingwen et al. [2] have studied the grid refinement effect for a two circulating fluidized bed. Hashizume et al. [3] have studied experimentally the pressure drop for a liquid - solid fluidized bed with different diameters of particles. Kalaga et al. [4] have performed a liquid phase residence time distribution (RTD) study in a conventional solid liquid fluidized bed and in a solid liquid circulating multistage fluidized bed. Al-Turaihi et al. [5] have investigated experimentally the steady state gas solid fluidized bed system with various materials of solid particles. Youjun Lu et al. [6] have studied experimentally the hydrodynamics of a supercritical water fluidized bed. Loha et al. [7] have investigated the influence of specularity coefficient on hydrodynamic behavior of fluidized bed with Geldert B particles using CFD Euler-Euler model. Leckner et al. [8] have studied the pressure fluctuations in a gas - solid fluidized bed by mean of a simple model of the principal frequency of the pressure fluctuations. Ramesh et al. [9] have obtained the gas holdup from the pressure drop and investigate the effect of composite promoter presence on the pressure drop for three phase fluidized bed. In this work, the bed pressure influenced by increasing water flow rate and the solid static height has investigated, the experimental result has compared with a result obtained by ANSYS Fluent 15.0 and a good agreement has been found.

2. The Experimental Equipment and Procedure

Figure (1) shows the schematic diagram of the TWO PHASE FLOW FLUIDIZE BED. The experiments were performed using Perspex circular cross section column with 1 m height and 0.0254 m diameter. Four taps 0.2 m apart along the test section side were used for pressure sensors with ranges from 0-1 bar that used to measure the pressure along the bed, the pressure sensor connected into a personal computer through data acquisition. The spherical stainless steel solid particles placed in the test column on a net with 0.334 mm hole spacing which represents the distributor, the water pumped with maximum discharge of 500 L/min from the water tank and forced into the pipe through the holes of the distributor. 1 in valve used to control the flow rate of water Flow meter has used to measure volume flow rate of water with ranges from 5 l/min to 35 l/min .AOS high speed camera has used to record the flow behavior inside the fluidized bed, the camera has active resolution of 720x480, and 29.97 Hz (59.94 Hz interlaced) image frequency with (SDTV 480i).

Three values of static head of solid particle (H) have used and for each value the water flow rate has changed for three times. In order to make sure of the results, each test has repeated for three times. The used values are shown in table (1)

Table 1. The values used for the experiment.

For the numerical simulation Software ANSYS Fluent 15.0 has used for modeling water-solid flow. Eulerian approach was employed which sometimes called granular flow model (GFM), particles in the flow has treated as magnified molecules so that on analogy of their behavior to the continuous phase molecules can be stipulated [10]. For this work, the fluidized bed flow has modeled to be turbulent according to Reynolds number (for all the cases).

The test section which is 1 m height and 0.0254 m diameter pipe has modeled as two dimensional structure using Ansys Workbench 15.0. The bottom edge has been divided into 13 small edges as representation of distributor.

Mesh has been carried out in ANSYS workbench 15.0 as well and Quad square mesh has been used to give 6500 element and 7014 node.

The bed initial volume fraction was set to be 0.7668. The bottom edge set as velocity inlet and since its already divided into 13 pieces, one piece had gave the value of inlet velocity and the next gave zero inlet velocity respectively for all of them. The sides of the bed set to be walls and the top edge which is represent outlet of the bed set as outlet pressure and the values of the outlet pressure was taken from the experimental work.

The value of the bed pressure was measured by setting points with the same coordinate as the pressure sensor used in experimental test and the pressure measured at this points for the bed flow behavior, image for the solid volume fraction is taken every 2.5 sec for all the experiment cases and the contour color set to be the same for all the experiment cases starting from 0 and ending with 0.2. So, the difference in packing can be seen clearly.

The other parameters have used for the numerical simulation in fluent model are shown in table (2).

Table 2. Parameters used for the simulation.

The general equations used by Eulerian multiphase model are the conservation of mass and momentum. Mass conservation equation can be written in its general form as

is zero as default value or else it can be a set constant value or define by user. Momentum conservation equation can be written in its general form as

is the stress - strain tensor.

q Represent the phase in all equations

The experimental result of pressure have compared with computational fluid dynamics results obtained using ANSYS Fluent 15.0 and a good agreement has been found as can be seen in figure (2). The two phase flow is a changing phenomena due to distribution of the solid particles are different each time for the same experiment. Figure (3) shows a comparison between the pressure results as the static bed height changed with respect to the water flow rate. Figures (4, 5, 6) show the solid particle distribution of experimental test and the solid particle distribution from Fluent program for the solid volume fraction, which shows the flow behavior in the test section as the water flow rate increases for different values of the static bed height for 0.4 m for each test. Fluent program gave a good result for the expansion of the bed as the flow rate changes, however the results is not exact match between the experimental and numerical results that because the images taken from the program for the same time but in the experimental work it taken at different times during the experiment. Figures (7, 8, and 9) show compaction between the flow behavior as the value of static head of solid particle(H) increases for different values of water flow rate. The contour color for all the experiment is same which is between 0 to 0.2 it can help to see the differences in the packing and spaces between the particles as the flow rate or H increases.

In this work, the two phase fluidized bed has studied experimentally and numerically by using ANSYS Fluent. The pressure of the bed has measured at different points along the bed and the behavior of the flow has monitored (or recorded) by using high speed camera which is then compared with the solid volume fraction of bed found by ANSYS Fluent15.0. Three different values of H and water flow rate have used. It can be concluded that

• As the volume flow rate of water increase the pressure of the bed will be increase.

• As the value of H increase the pressure of the bed will be increase.

• As the volume flow rate of water increase the expansion of the bed will be increase.

• As the value of H increase the expansion of the bed will be increase. 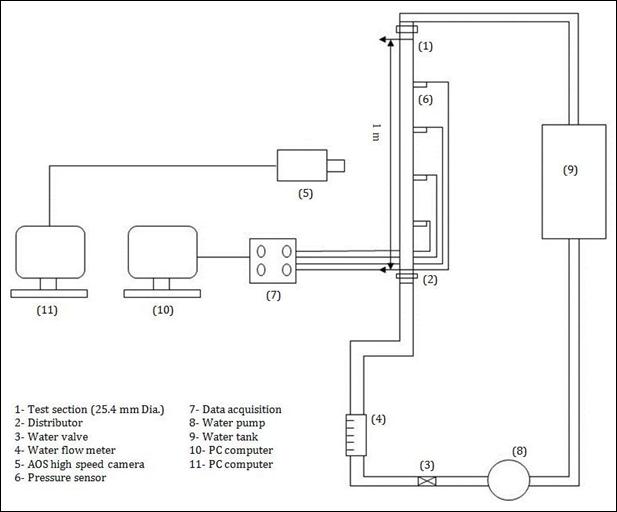 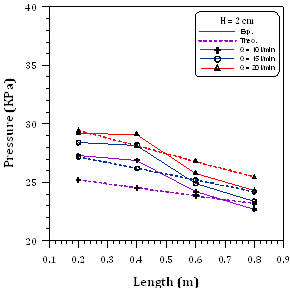 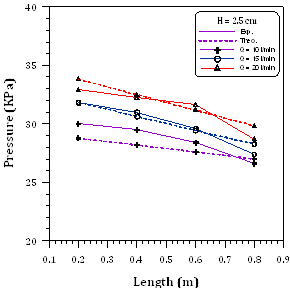 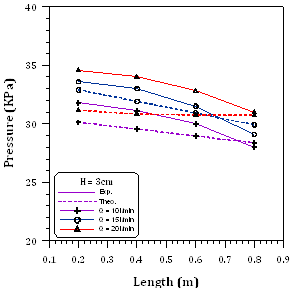 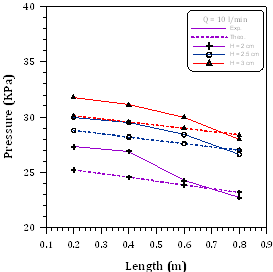 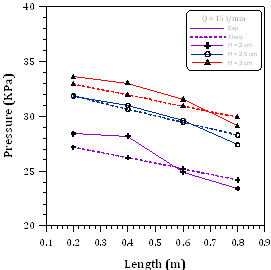 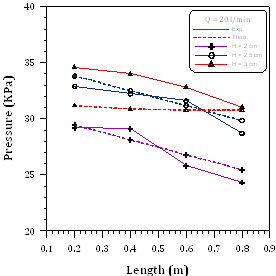 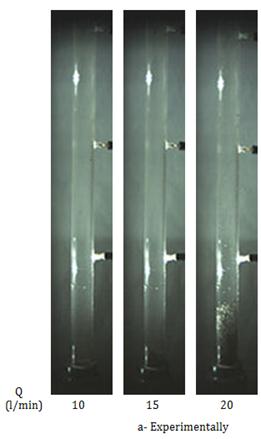 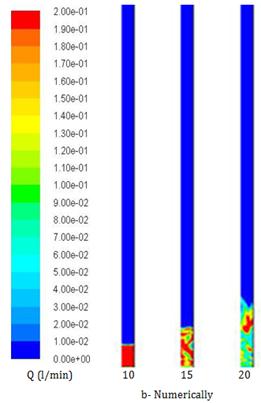 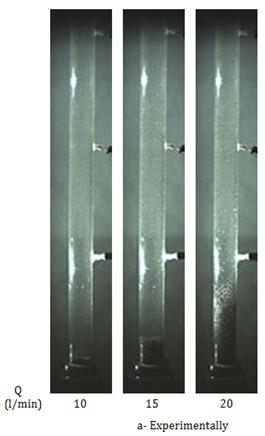 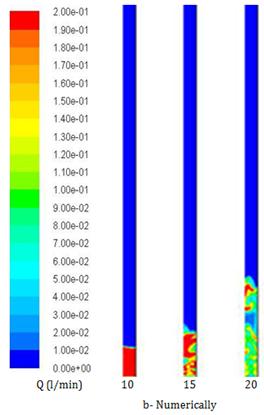 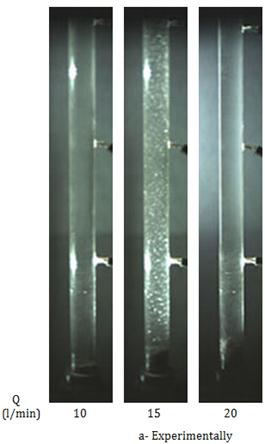 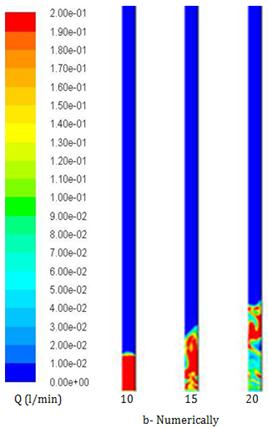 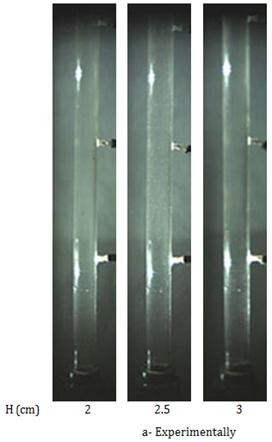 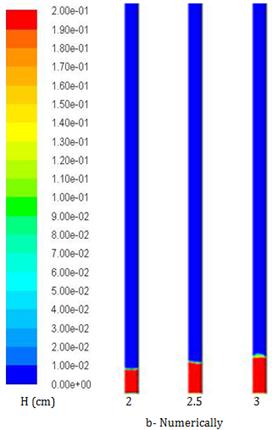 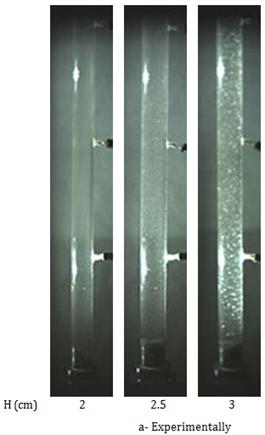 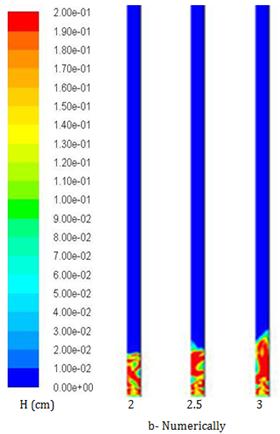 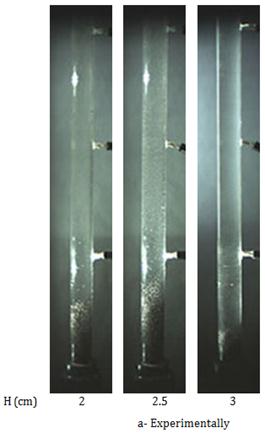 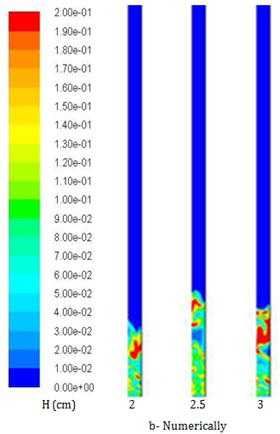