Abstract: In order to optimize structure parameters of lifting drum, the buckling stability of drum on crane is analyzed infinite element method with Euler distribution force which is more appropriate to the realistic load state. The results of finite element analysis are compared with the computing results of traditional simplified method. The research provides a new idea for the stability optimization design on lifting drum as cylindrical shell structure with complex inner rib plate.

The drum, as the most important force component of crane, the design of stability of it is directly related to the normal work of crane. At present, many important works in this field have been studied, Yixiao Qin represented a coupling between the optimum method of advance and retreat and the finite element analysis for the design on large hoist drums of crane [1], the finite element analysis of crane’s drum was studied [2], the buckling stability analysis of 1600t crane’s drum is analyzed based on ANSYS [3].

Besides, many stability analysis consider the drum as an ideal model of cylinder shell in uniform compression [4, 5, 6]. However, the distribution of stress of drum is mainly concentrated in several circles around it in the real situation. The researches [4,5,6] didn’t respect the characteristics of drum properly or even consider the benefit of complex inner rib plate of drum. Nor did they study the possibility of the nonlinear buckling with drum.

The model of drum is set up based on the feature of structure and stress which depend on the force distribution and equilibrium relationship. The relationship between structural distortion, the variation of stresses and wall thickness of crane are studied, then the results between FEM and conventional design method based on experience design and static design are compared. The coefficients of eigenvalue stability and several unstable modes of drum come out. Finally, the heavy and structure parameters of crane’s drum are optimized for the model is imitated properly.

Normally, the braking of heavy weight decline is considered the most dangerous work situation, as shown in Fig. 1. 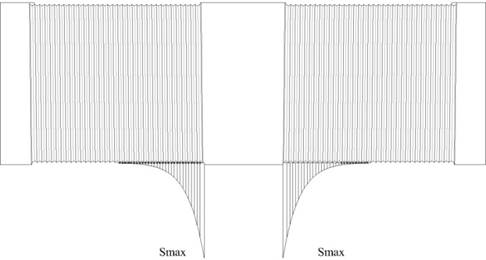 Most researches assume that the screw ropes are seal off and the identical stress is spread in groove well-distributed [7, 8]. The drum is regarded as axisymmetrical for overlooking the rope’s axis force to end plate. However, the stress of rope declined from drum contact point along the rope groove gradually, which obeys Euler distribution, the equation is:

The diameter stress (print to the centre of curvature) is

the rub force is

distributed along the rope groove for the rope clash the drum.

The direction of rub force can be composed into along the drum and print to drum. Because of the angle between rope groove and drum’s axis is θ, the axis part force is

the diameter part force is

equals to the torque

loaded by weight suspension, and the axial force is

and the vertical resultant

are shown as follows:

Because the rubbing factor

The resultant force of vertical resultant is considered as follow:

Where minus refers to contrast to the coordinate direction

Then, the torque of drum made by rope is:

Thus, the twine feature of drum’s rope was ignored for most researchers load the force of rope on drum directly. Although the stress model could reflect the macroscopic force of drum, but the model can’t give accuracy expression to the rope groove’s stress as part of drum’s. As a consequence, the primary model can’t reflect the local buckling of drum for the reason that the primary model does not match the reality.

The stress of rope along the drum changes continuously and obeys the Euler distribution, and the hoop force is proportional to the wire rope tension, as well as the hoop force obeys Euler distribution. Thus, the continuously changed stress must be discretized in FEM. So, the rope stress along groove is loaded on the key points of tiny shell which distributed form rope groove. Every rope groove is divided into N parts, every distributed force is loaded on key points to insure that the join force of rope equals to the join force of key points, as shown in Fig. 2: 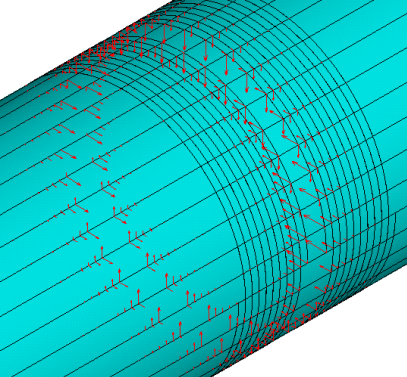 3. The Analysis of Eigenvalue Bucking on Drum with Euler Distribution Force

Firstly, the eigenvalue stability is analyzed [10, 11].

The critical load of drum is

refers to the force of rope applied on drum,

refers to eigenvalue of every state.

The equation for eigenvalue of every state is

is structure stiffness matrix which meets the conditions of small displacement,

is geometric’ stiffness matrices of drum.

is the eigenvectors for I derivative

The first to fourth mode analyzed by ANSYS, as shown in Fig. 3-Fig. 6. 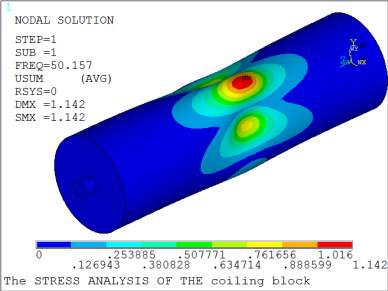 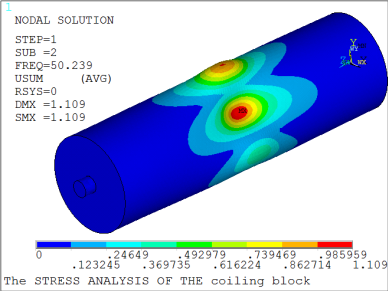 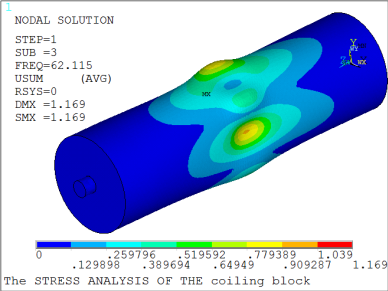 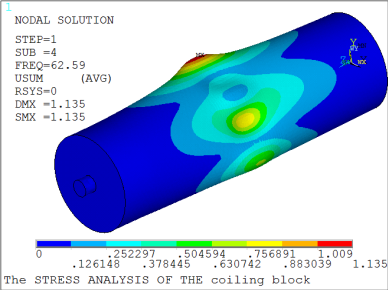 As can be seen from the results: 1) when the gripping force reached to the critical pressure, the bucking deformation of the drum took place, the state of instability declined from the middle of drum to the edge of drum, and the drum have feature of radial wave patterns for the griping force loaded on drum. 2) Since the force which loaded on the drum is ultimate strength when having static analysis [12,13], the coefficient of first mode is the stability coefficient, the feature is 50.157, as shown in Fig. 3. Thus, the result shows that the wall thickness of drum is too thick and it is hard to destabilization failure before force reach to buckling.

Table 1. The coefficients of eigenvalue bucking (CEB) in different thickness of drum. 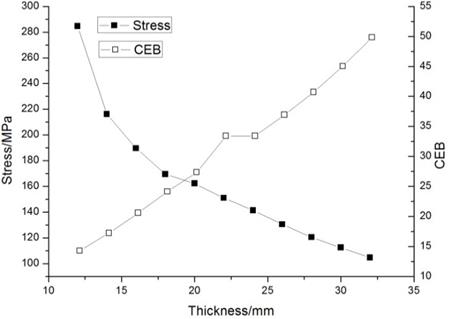 Fig. 7. The coefficients of eigenvalue bucking in different thickness of drum.

It is conclusion that with the thickness of cylinder wall becoming more thinness, the stability coefficient of drum decrease. But the critical load is still higher more than 10 times than calculation load, thus, equilibrium bifurcation buckling can hardly happen.

4. The Nonlinear Stability Analysis of Drum with Euler Distribution Force

The process of nonlinear stability analysis is mainly as follows:

(1) Reasonable incremental step load is set up. In order to obtain accurate critical load value, the dichotomy and automatic time step is used in which case the load increment is small enough when the stress comes near the critical load of drum. As a result, the stability of a large calculation results due to the large step load is avoided.

(3) Initial defects of modify the drum’s structure model is applied. The buckling deformation features which comes form eigenvalue above are used as initial defects to amend the model.

(4) Reasonable solver is chose. The sparse matrix is used to solve this problem, for the reason that it is useful when the model is small or there is ill-conditioned cell in the structure model.

The result of nonlinear stability analysis is shown in Fig. 8. 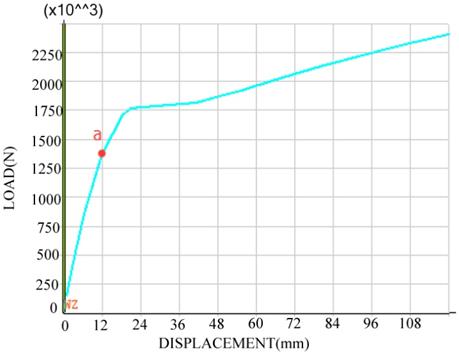 The Fig. 8 shows the deformation of drum and rope tension meet small displacement relationship before point a. While the deformation of drum increase obviously with the increase of strain, so that the drum have the ability of resisting critical load when the rope tension exceed point a (1800N), which is so-called the carrying capacity of post-buckling. The table 2 provides some data regarding the critical tension of rope in geometric nonlinear stability is 1.4×106N, decreased by 52.1% than the critical tension of eigenvalue bucking. The graph of the result is shown in Fig. 9. 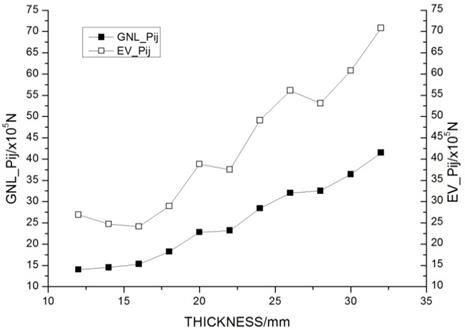 The Fig. 9 depicts that as the decline of the wall thickness, the critical tension of drum structure gradually reduce. In short, the result indicates that the influence of wall thickness to the stability of drum is apparent.

The large deformation of structure and sensitivity of the structure defects are analyzed above. By the result, the maximum stress far more exceeds than the allowable stress, thus, the material yield before the structure of drum. So, the ultimate bearing capacity of steel is considered. The steel feature is set for Von-Mises yield criterion in ANSYS. 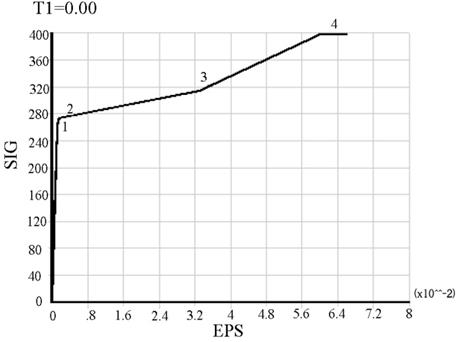 Then, the iterative process of multi linear kinematic analysis of drum is shown in Fig. 11. 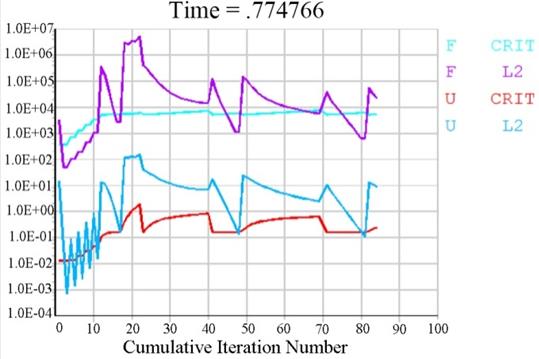 It can be obtained that the elastic limit of material is 261MPa then the rope tension reached point a, the drum displacement and rope tension basically met small displacement linear relationship before point a, as is shown in Fig. 10. The material of drum came into plastic deformation range and the displacement increases obviously when the rope tension exceed point a. The stress diagram is shown in Fig. 12. The geometric nonlinear characteristic of drum is caused by the increase of deformation. Thus, the solving speed is very slow for the reason that the elastic stiffness matrix and geometric stiffness matrix must be corrected in next iteration. 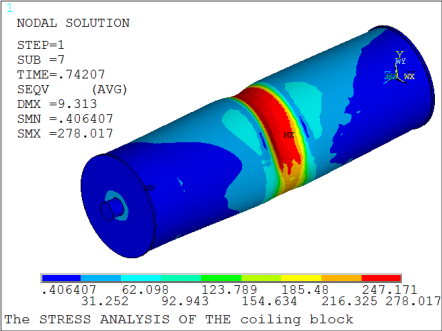 Fig. 12. The stress diagram of the material enters the plastic state.

The bearing performance of stability of crane’s drum is studied based on the force model obeys Euler distribution. Some of instability models and coefficients of stability are reached by searching eigenvalue buckling of different thicknesses of drum. The maximum allowable stress of rope of buckling drum is confirmed by analyzing the stability of nonlinear large deformation with force model obeys Euler distribution stress and tracking the displacement of rope’s contact point. Thus, the buckling coefficient of drum to the nonlinear instability is determined. Refer to the result of chapter four, this method is an accuracy method which close to the real stress state and can be used to design crane drums precisely.

This work was supported by the Natural Science Foundation of Shanxi Province, China (Grantno. 2013011022-6)