Abstract: AIM: To determine the relationship of body mass index (BMI) on the mean dose length product (DLP) values acquired using modulated (automatic exposure control) and standard computed tomography (CT) scanning protocols as part of a typical 18F-FDG PET/CT study. METHODS: A retrospective study was performed and the dose-length product and BMI values from routine 18F-FDG PET/CT scans of 51 patients were recorded. The scans were performed on a 16-slice PET/CT scanner by using an automatic exposure control (AEC) system. DLP, BMI, age, sex and number of bed positions were documented for each patient. RESULTS: Twenty-four women and 27 men were included in the study (mean age, 52.5 years). The mean BMI was 24.76 kg/m2. The mean modulated DLP was 528.25 mGy/cm. Patients were grouped according to BMI (normal: BMI <25, overweight: BMI 25 – 30, obese: BMI >30) and age (≤18 years, 19 – 59 years, ≥ 60 years). The mean modulated DLP decreased by 22.77% for patients in the normal BMI group (P < 0.001). The obese group of patient’s mean modulated DLP was 26.29% higher (P < 0.01). The DLP decreased by 22.43% for patients aged 60 years and above compared with patients in the 19 – 59 age group. CONCLUSION: The use of modulated scanning protocol significantly reduces the integrated dose received from a whole body CT scan for patients with a BMI < 25. Increasing patient size (BMI >25) significantly increases the integrated dose received. The possible change in body composition with age may also indicate a reduction in dose received from a whole body CT scan using AEC.

The use of ionising radiation in medical imaging is governed by the ALARA principle. Thus, clinically acceptable image quality should be obtained at a dose that is ‘as low as reasonably achievable’ [1]. CT accounts for approximately 12% of the x-ray based examinations carried out in the England [2], however it contributes more than 50% of the combined radiation dose to the population [3,4].

The study by Gonzalez and Darby [5] estimated the increased risk of cancer development from diagnostic x-ray procedures is between 0.6 and 3.2%. Therefore, it is incumbent that low-dose CT imaging protocols are developed to ensure that patients can receive significant medical benefits whilst minimising the risks associated with ionising radiation. The CT scanning protocol chosen for each patient at this institution was previously based on the patient’s Body Mass Index (BMI) [6]. A fixed kVp value of 140 was used and a tube current (mA) of 80, 100, or 120 was chosen depending on the BMI of the patient. It was proposed that a dose modulated method should be implemented utilising 120 kVp and a modulated mA, individually tailored to the BMI of each patient. The aim of dose modulation is to achieve a standard level of noise throughout an image, and maximise the image quality for a given dose. In contrast to the fixed mA method used previously, the modulated protocol would now increase mA in anatomical regions of high attenuation, and decrease mA in regions of low attenuation. Dose varies proportionally as kV2, thus a small reduction in kVp leads to a large reduction in dose. A scanning value of 140 kVp is rarely used in a radiology setting with diagnostic CT scans typically being carried out at 120 kVp. The reason for its use has been purely traditional, based on the need for early scanners to have X-ray energies with similar scattering properties to those available in PET. However the necessary corrections have now been derived at 120 kVp, thus the motivation to standardise.

The new dose modulated protocol was devised using an anthropomorphic phantom (Rando, The Phantom Laboratory, New York, USA). The phantom was then scanned using the standard protocol (Rando is based on a 70kg standard man, thus a current of 80mA was used). The magnitude of kVp was then decreased to 120, and the noise index changed until the dose length product (DLP) from the new protocol was the same as the standard protocol mA. The DLP unique to the patient is displayed at the cessation of a CT scan. The DLP (mGy/cm) is indicative of the total deposited energy, and is defined as the length of examination (in the z direction) multiplied by the CT dose index (CTDI) [7].

The purpose of this study was to determine the relationship of body mass index (BMI) on the mean dose length product (DLP) values acquired from a routine CT scan with a 16-slice MDCT scanner using an AEC system.

This was a retrospective study in which 53 patients were imaged using a whole body CT scan as part of their scheduled Fluorine-18 Fluorodeoxyglucose (F-18 FDG) PET/CT study. All patients had their weight and height measured before the study. Body mass index (BMI) (kg/m2) was calculated for each patient using their weight (kg) and height (m). The PET/CT studies were performed using a 16-slice MDCT scanner (Discovery ST; GE Healthcare, Little Chalfont, UK). A dose modulated CT scanning protocol was used (Table 1).

The CTDIvol quantifier is the CTDIw for each study corrected for couch pitch. The DLP is an indicator of the integrated radiation dose for the whole series of images and is measured in mGy/cm [9,10].

A PET scan is acquired as a series of several distinct bed motions, called bed positions. For each patient the dose length product (DLP) values were recorded and standardised to 6 bed positions. One bed position is equivalent to 15.2cm in length. This standardisation accounted for differences in the physical length of each study (z direction) due to the variations in patient height. The DLP values were standardised using the following:

From the CT studies the patients were categorised by BMI (normal: <25 kg/m2, overweight: 25 - 30 kg/m2, obese: >30 kg/m2) and age group (group 1: = < 18 years, group 2: 19 - 59 years, group 3: > = 60 years). BMI and DLP were further analysed based on patient age. Statistical analysis was performed with commercially available statistical software (SPSS for Windows, version 14.0. Chicago, SPSS Inc). The Student t test (one-sided) was used to compare the modulated and static DLP values measured for each BMI subgroup. A P value of less than .05 was used to indicate a statistically significant difference. 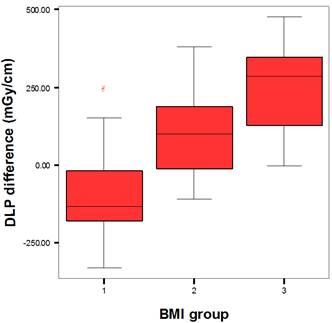 Patients were grouped by BMI and analysed statistically using Students one-sided t test. The Boxplot in Figure 1 displays the difference between the DLP values measured using the modulated protocol and the DLP values expected had the patients been scanned using the standard protocol. Figure 2 shows a comparison of standardised DLP to BMI showed that DLP increased with increasing BMI. The comparison of means between the modulated and standard DLP values is summarised in Table 2.

The clinical details for the two paediatric cases imaged are displayed in table 4. Current practise for young (paediatric/adolescent) patients is to deliver an average DLP = 212.62 mGy/cm per scan (kVp = 140, mA = 40). This is only an average value; the mA is actually modified on a patient by patient basis, depending on the size of the patient. The modulated CT protocol delivered a reduction in DLP to patient 1 and an increase in DLP to patient 2. 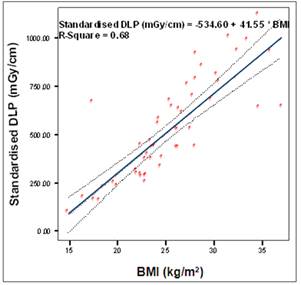 The mean DLP measured for patients with a BMI < 25 (normal) showed a significant dose reduction using the modulated CT protocol. A total of 6 patients (normal group sample size = 27) were delivered dose values above the standard CT protocol value of 425.25 mGy/cm.

Overall, 68% (17/25) of patients belonging to the overweight and obese groups measured DLP values above the standard CT protocol values (BMI specific). This increase in DLP using the modulated CT protocol is most possibly attributed to the increase the photon flux (variable mA) in areas of high attenuation and noise standardisation. The relationships between obesity and increasing DLP from CT scanning protocols have been published previously [11,12,13]. An increase in DLP has been shown to directly relate to the increased risk of cancer induction and heritable disease [1].

Therefore, as obesity rates continue to rise [14], this increase in radiation dose presents a potential rise in the risk of stochastic effects. Radiation dose reduction is always desirable, especially so in children and adolescents. From the young patients scanned a large reduction in DLP was seen in one patient and an increase in the other. From this group it should be noted that by analysing BMI by age and sex, patient 1 was on the underweight side of normal, and patient 2 was on the overweight side of normal. Patients in age group 3 (> 60 years) displayed a lower mean DLP when compared to the age group 2. Age group 3 measured a mean BMI = 23.98 kg/m2 and group 2 BMI = 26.40 kg/m2, therefore explaining the reduction in DLP. This BMI difference in the older age group may also reflect a change in body composition with age.

These preliminary results show that the modulated CT protocol delivers a significant reduction in dose (standardised DLP) to patients with a BMI < 25 kg/m2. Overweight and obese patients experienced a 15%-26% increase in the measured DLP per CT study. The increase in DLP delivered to patients with a BMI > 25 using the modulated CT protocol suggests that the current standard protocol maybe be qualitatively inferior (suboptimal image quality), as it does not allow for regions of high attenuation, rather it uses a fixed mA for each patient. However, further qualitative analysis must be carried out before a conclusion on image quality can be made.