Abstract: The purpose of the study was to analyze the shapes and volumes of the pituitary gland as seen on magnetic resonance imaging using two different methods in the adolescent age group (10 to 19 years). The study was designed as a retrospective review. MRI brain was performed in 99 patients and pituitary volumes were calculated using voxel counting method and the ellipsoid formula. Pituitary shape was graded from one to five based on the surface curvature. The volume, height and shape of the pituitary in male and female patients were analyzed. The average pituitary volume by voxel counting method was found to be 0.54 cc ± 0.16 cc in both sexes, 0.51 ± 0.13 cc in males and 0.56 ± 0.19 cc in females. The average pituitary volume by ROI was found to be 0.42 cc ± 0.16 cc in both sexes, 0.40cc ± 0.15 cc in males and 0.43 cc ± 0.17 cc in females. The average pituitary height was 0.58 cm ± 0.15 cm in both sexes, 0.55 cm ± 0.16 cm in males and 0.60 cm ± 0.15 cm in females. The correlation coefficients between the two methods for concave shapes, for flat shapes and for convex shapes were 0.73, 0.76 and 0.60 with p values were 0.0007, 0.0007 and 0.0002 respectively. The average volume of the pituitary gland was 6% greater in females. There was a gradual increase in volume and height of pituitary gland with age. The two methods showed positive correlation which was statistically significant.

MRI has proven to be useful in the assessment of pituitary morphology due to its excellent contrast resolution and high special resolution. T1 weighted sequences can be used to differentiate the neurohypophysis from the adenohypophysis due to the high signal intensity of the neurohypophysis[1]. Several authors have reported pituitary volumes using indirect methods and more recently by direct methods using thin section 2D and 3D MR images[2-5]. Volume measurements using 3D MR volumetry have been shown to be more accurate[6]. Most of these studies have dealt with adults. In the adolescent age group the size of the pituitary gland may be altered by both physiological and pathological processes (affected by various conditions such as growth hormone deficiency, idiopathic short stature in which the size is small and tumors, physiological hyperplasia in which the size is increased). It is important to differentiate benign causes of pituitary hyperplasia from pathological conditions[7]. To our knowledge there no publications attempting to measure the volume of the pituitary gland in normal adolescent children in the Indian population. The purpose of this study is to measure the normal volumetric growth of the pituitary gland in the adolescent age group (10 to 19 years) and to compare our findings with those of previous studies.

This study was designed as a retrospective review. A computerized search of the iPacs database for brain MRI examinations from February 2014 to February 2014 at M.S. Ramaiah hospitals yielded 99 patients in the age group of 10 to 19 years. Complete medical records were available for all the patients and did not reveal any factors which could alter the size of the pituitary such as endocrinopathy, tumor, pituitary surgery or certain medications.

Scans were performed using a 1.5 T MR unit (Magnitom Avanto Seimens). MPRAGE 1 mm sections of the pituitary gland were obtained in both sagittal and coronal planes.

Maximal pituitary height was determined from midline sagittal images by measuring the greatest distance between the superior and inferior borders of the gland. Criteria for midline image were visualization of the pituitary stalk, sylvian aqueduct and high signal intensity of the neurohypophysis. Lateral and anteroposterior dimensions were similarly determined by measuring the greatest dimensions on coronal and sagittal images, respectively. The volume of interest was determined by manual tracing with a mouse guided pointer.

Volume was estimated in two ways:

2)  Voxel counting method within a region of interest. 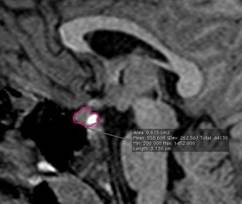 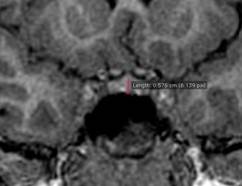 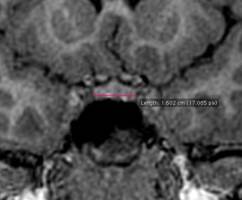 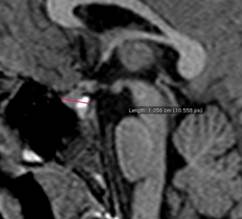 Figure 3. Grades of pituitary shapes in coronal plane – Grade I to Grade V. 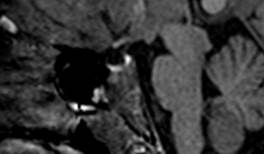 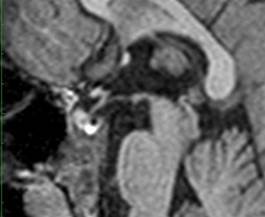 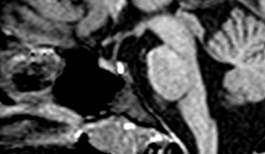 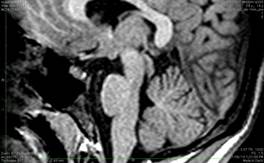 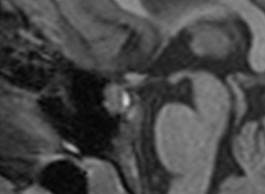 Figure 4. Grades of pituitary shapes in sagittal plane – Grade I to Grade V.

Data analysis was done using SPSS. Patients were stratified according to age and sex. Mean and standard deviation were calculated for all the data and expressed using tables and graphs. Pearson’s correlation was used to assess the relationships between age, sex and pituitary dimensions. P value of < 0.05 was considered significant.

There was a moderate correlation between all pituitary measurements (r = 0.4) and age with p value < 0.01. There was a gradual increase in pituitary height with age. No growth spurt was observed.

Females had a slightly larger pituitary gland but the difference was not statistically significant.

There was no relationship between the volume of the neurohypophysis and either age or sex.

Table 1. Mean and standard deviation of pituitary gland dimensions and volumes in females.

Table 2. Mean and standard deviation of pituitary gland dimensions and volumes in Males. 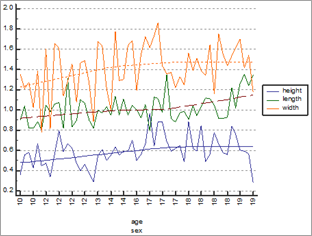 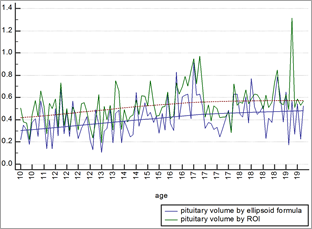 The only other published data on whole pituitary gland volume in a similar age group as in our study are by Takano et al[12]. In their study on 199 Japanese children aged 0 to 19 years a growth spurt was observed which was more prominent in girls, unlike that seen in our study. They also reported gradual growth of the posterior pituitary without a spurt however, in our study there was no growth of the posterior pituitary observed. This study reported average pituitary volumes in males and female in the age group of 10 to 19 years of 0.51 cc and 0.61 cc respectively which correspond to the results of our study.

It has been well documented that the size of the pituitary varies with age. Some authors have also reported sex differences in pituitary volumes with females having slightly larger glands[13,14]. Our study did not show a statistically significant difference in pituitary volume between the two sexes. Changes in the shape of the upper surface of the pituitary gland occur with age and are more pronounced in females varying from concave to flat and a convex bulging appearance[15,16]. The results of these studies are similar to our own.

There is a vast variation in the shape of the normal pituitary gland. In distinction to a study performed on prepubertal children in Australia our study showed a significant positive correlation between linear dimensions and volume which was greatest for pituitary height[6]. 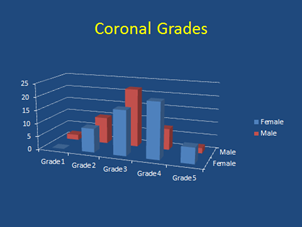 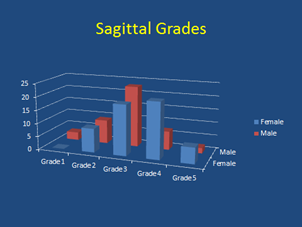 Figure 7 & 8. Grades of pituitary shape on coronal and sagittal images.

Our study may be limited by selection bias as the high cost of MRI examination prohibited inclusion of normal volunteers in the study. Patients without imaging or clinical evidence of neuroendocrine pathology were selected.