Accurate assessment of gestational age is an important part of any obstetric examination and presently the most effective way to date pregnancy is by the use of ultrasonography. Several sonographically derived fetal parameters are used to date pregnancy. They are fetal crown-rump length (CRL), biparietal diameter (BPD), head circumference (HC), femur length (FL) and abdominal circumference (AC). However, there are some drawbacks in these parameters in estimating the gestational age. So, there is a need of another parameter for supplementing the gestational age estimation with minimal error.

This was a prospective cross sectional study consisting 150 normal antenatal women who were assessed clinically at the Department of Obstetrics and Gyaenocology and referred to the Department of Radiology, College of Medical Sciences, Bharatpur for ultrasonography, during the study period from September 2011 to August 2013.

After taking a detailed history, the antenatal women were examined for placental thickness, gestational age and fetal weight ultrasonographically. Subjects were included in the study if they meet the inclusion criteria. Written informed consent was obtained in all subjects before the ultrasonographic examination. The normal antenatal women of all gestational ages from 11 weeks to 40 weeks of gestation referred to the department of Radiology, College of Medical Sciences, Bharatpur for routine antenatal ultrasound were included in the study. Patients with pregnancy induced hypertension, diabetes mellitus, intrauterine growth retardation, hydrops fetalis, congenital malformations and twins were excluded.

The grey scale real time ultrasonographic examinations were performed using a TOSHIBA XARIO ultrasound equipment system. The transducer of the TOSHIBA XARIO ultrasound used with a scanner frequency of 3.5 MHz. Subjects were scanned with a moderately distended bladder in supine position. The transducer was placed on the skin surface after applying the coupling agent. Placental thickness, in mm, was measured at the level of cord insertion site. The transducer was oriented to scan perpendicular to both the chorionic and basal plates, as tangential scan will distort the measurement of the thickness of placenta. All placental measurements were taken during the relaxed phase of the uterus as contractions can spuriously increase the placental thickness.

The statistical software Statistical Package for Social Sciences (SPSS) 20.0 was used for the analysis of the data and Microsoft word and Excel 10.0 have been used to generate graphs and tables. The mean values of placental thickness, in mm, along with respective standard deviation (SD) were computed for each gestational age from 11 weeks to 40 weeks. The 95% Confidence Interval were also calculated. Pearson’s correlation analysis was also used to establish the degree of relationship between placental thickness, gestational age, BPD, FL and AC. Values were expressed as mean ± SD. Statistical tests were two-tailed with p < 0.01 to indicate statistical significance.

In the total study group of 150 normal antenatal women, the age ranged between 17 years to 35 years. The mean age was 22.64 years and a SD of 3.30. The distribution of cases with respect to maternal age groups is given in Table 1. Majority of antenatal women were in the age group between 20 and 30 years.

Table 1. Maternal age distribution as declared by the subjects at the time of examination.

Table 2. Gestational age at the time of examination.

Out of 150 normal antenatal women studied, anterior placenta was noted in 36%, posterior in 46%, fundal in 11% and lateral in 7% cases. Distribution of placental position is shown in Table 3.

Table 3. Distribution of placental position at the time of examination.

Placental grading is shown in Table 4. Grade 1 placenta was present in 93 subjects, 37 had grade 2 and 20 had grade 3 placenta.

Table 4. Placental grade according to the maturity of placenta as seen on ultrasonography. 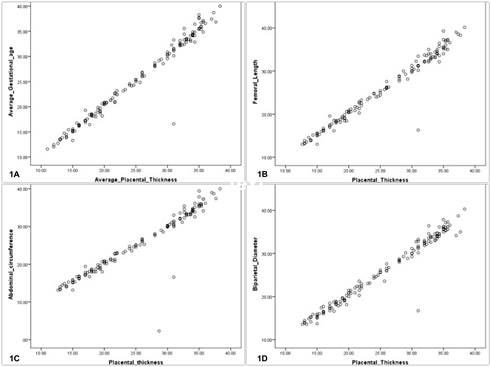 Fetal growth parameters such as BPD, and AC are used in the sonographic estimation of gestational age and weight of the fetus in the second and third trimesters. [12] It is a standard practice to assess FL as part of the evaluation of fetal size and morphology. FL has been established as an accurate parameter for estimating gestational age in the second and third trimesters. [12] Present study showed a statistically significant positive correlation between placental thickness, FL, BPD and AC. This means that estimated fetal weight which is calculated based on a formula having FL, BPD and AC as variables [13] is dependent on placental thickness.

In this study we adopted a cross sectional design, which is made up of observations on different individuals and did not follow the subjects longitudinally. So, it may not provide a clear understanding in individual growth patterns. [14] However, it is a reasonable approximation of a true placental growth curve. There is a need to recruit subjects at the beginning of the second trimester and scan them at regular intervals to ascertain the relationship between placental thickness and growth parameters. Such a study should be multiple to increase the validity of the result. In our environment this will be a difficult task because of low literacy level and a trend of home delivery.

RA conceived the concept and wrote the first draft. RA performed the sonographic investigations. RA, PKD, AT and PKC involved in the data collection, critically reviewed the manuscript and all approved content of the final manuscript.