Abstract: Synthesis of biodiesel from the beef tallow using catalyst from Psammotaea elongata shell with methanol as a solvent was carried out. Synthesis the biodiesel was prepared in two steps, there are esterification and transesterification. In esterification was conducted in mole ratio of oil and methanol were 1: 9, with H2SO4 as a catalyst. Transesterification process conducted with mole ratio were 1:12 (oil and methanol), with CaO from cockle’ shell as a catalyst with a variation of the catalyst 11%, 12%, 13%, and 14%. Result of biodiesel was characterized based on FT-IR, 1H-NMR, GC-MS, and ASTM (American Standard Testing of Materials) method. The results obtained by the catalyst conversion of 51.9% and the optimum conditions in the biodiesel present in 12%. Yielded of biodiesel theoretically was 59.118% and experiment was 18.34%. The main component on biodiesel product is methyl stearate (40.65%) and examination result of biodiesel by using ASTM method are specific (0.8695 g/cm3), kinematic viscosity (5.393 mm/s2), flame point (178.5 °C), pour point (24 °C), and carbon Condradson residue (0.071%).

Depletion of the world petroleum reserves and increasing environmental concerns has stimulated the search for renewable fuels. Biodiesel is receiving increased attention as an alternative, non-toxic and biodegradable renewable fuel [1]. Biodiesel is commonly produced by the transesterification of plant oil or animal fat with short chain alcohols. This biomass fuel has received much attention, since it is a kind of alternative, biodegradable, nontoxic, and renewable energy. In addition, use of biodiesel does not contribute to the accumulation of carbon dioxide in the atmosphere, because it is an integral part of the carbon cycle [2,3].

In addition, biodiesel increases lubricity (even at blends as low as 3% or less), which prolongs engine life and reduces the frequency of replacement of engine parts [4].

Biodiesel from animal fat has the advantage of calorific value and high cetane numbers. Besides, their high cetane number and heating values are close to the diesel fuel and their oxygen content make animal fats to have surplus advantages [5,6]. Animal fats are highly viscous and mostly in solid form at ambient temperature because of their high content of saturated fatty acids. The high viscous fuels lead to poor atomization of the fuel and result in incomplete combustion. Transesterification and emulsification are two main solutions that have appeared as effective methods for using animal fats in diesel engine. The fuels produced by these methods from animal fats and vegetable oil reduce pollutant emissions and improves combustion [7]. Biodiesel can produce from triglycerides and fatty acids by chemical reaction called transesterification and esterification [8].

Transesterification or esterification reaction to produce biodiesel was accelerated by catalyst. The most effective catalyst is heterogeneous solid base catalysts such as MgO in nano-particles form, solid CaO and Ca(OCH3)2. Heterogeneous base catalysts have many advantages: they are noncorrosive, environmentally benign and present fewer disposal problems. Meanwhile, they are much more easily separated from the liquid products and can be designed to give higher activity, selectivity and longer catalyst lifetimes [9,10].

The heterogeneous base catalysts an alternative have been considered as solid base catalysts due to several advantages: the catalysts are not dissolved or consumed in the reaction and therefore can be easily separated from the product, regenerated and reused and the catalyst also can be applied in a continuous process. Recently, much interest has been taken in calcium oxide (CaO) due to its economic advantages. Kawashima and coworkers [11] found that calcium oxide was so active (90% of biodiesel yield) as to finish transesterification of rapeseed oil with refluxing methanol within a reaction time of 3 h. High catalytic activity of nano-crystalline CaO (99% conversion) in the transesterification reaction of poultry fat and soybean oil at room temperature [12].

In this paper, reported about esterification and transesterification reaction of beef tallow to biodiesel with CaO as catalyst was synthesis from Psammotaea elongata shells and characterizations of biodiesel product by FT-IR, 1H-NMR, GC-MS, and ASTM methods.

Powder of P. elongata weighed as much as 50 g. The Powder then inserted into the calcination apparatus. The calcination process is done by heating the solid at a temperature of 1100 °C for 2 h and follow by N2 gas.

Beef tallow that has been cleaned as much as 150 g incorporated into three-neck flask, and added oil and methanol mole ratio of oil to methanol is 1: 9, then added H2SO4 1.25% of the total amount of oil and methanol then refluxed at a temperature 60-65 °C for 2 h. This Process will produce two layers, namely mixture methanol and methyl ester on top and on bottom of triglycerides. Furthermore, the two layers are separated. Triglycerides that was separated from esterification process then transesterified with methanol (mole ratio 1: 12) and added to the base catalyst P. elongata with weight variation, 11%, 12%, 13%, and 14%, of the total oil and methanol. Then mixture was refluxed at temperature of 60-65 °C for 5 hours. The reaction mixture was cooled and formed two layers, namely methyl ester (biodiesel) on the upper layer and glycerol on the bottom layer. Both layers are then separated from the catalyst CaO. Furthermore, methyl ester esterification and transesterification process results evaporated to remove residual methanol. Methyl ester then washed with distilled water in a separating funnel to dissolve the residual glycerol. The final step is the addition of anhydrous Na2SO4 as sufficient to bind the remnants of water, and then filtered with filter paper Whatman-40. The methyl esters were analyzed for chemical composition by FT-IR, GC-MS, and 1H-NMR, were further tested with the physical characteristics ASTM standard method (specific density, kinematic viscosity, flash point, pour point, and residual carbon Condradson).

3.1. Preparation and Synthesis of CaO Catalyst from Shells P. Elongate

Synthesis of the CaO catalyst from P. elongata shells initiated by preparation of the raw catalyst there is washing with distilled water and then dried in an oven at 150 °C for 2 h. The cleaned raw material of catalyst is crushed with a mortar until smooth and sieved to 100 meshes. Powder that was resulted then calcined at 1100 °C for 2 h. The calcination process is performed in order to remove CO2 from CaCO3 that is contained in the shells of P. elongata to produce CaO. CaO conversion results are obtained from calcination 50 g shells of P. elongata 51.9% (b/b).

The result was obtained after esterification was formed two layers, namely fatty acids and triglycerides. Furthermore conducted transesterified triglycerides with alkaline catalyst CaO derived from shells of P. elongate. Variation catalyst that was used there are 11%, 12%, 13%, and 14% w/w, at 60-65 °C for 5 hours with a ratio of oil to methanol molar ratio is 1: 12.

Generally, faster reaction rate can be obtained at high temperatures (approaching the boiling point of methanol at 68 °C), but at high temperatures, methanol can evaporate and inhibit the reaction process. At higher molar ratio, triglycerides will react. However, excess methanol will be disturbed separation of glycerol because there is increased in the equilibrium back in the opposite direction, thus lowering the yield of ester [13].

After transesterification process, three layer will be produced there are methyl ester, glycerol, and catalysts. Once separated from the catalyst, methyl ester and glycerol are then separated with a separating funnel. Glycerol content is an indication of the success of trans-esterification. Amount of glycerol produced depends on content of free fatty acids in oil.
The result of the methyl esters were separated from glycerol then evaporated, and washed with distilled water repeatedly until the color becomes clear. Washing process aims to eliminate the residual alcohol remains in the product. Once the biodiesel and distilled water are separated then given anhydrous Na2SO4 to bind the residual moisture contained in the methyl ester. Furthermore, the results filtered with filter paper whatman-40 and obtained methyl ester then characterized the chemical and physical properties.

To determine optimum capability of shells CaO catalyst P. elongata in catalyzing transesterification of the beef tallow to biodiesel, firstly conducted optimization catalyst with four variations of the CaO catalyst percentage there are 11% (w/w), 12%(w/w), 13%(w/w), and 14%(w/w). Result of conversion processes showed that 11% (w/w) CaO catalyst is not functioning properly because the amount is too small. Furthermore, the weight of 12% (w/w) CaO catalyst was produce methyl ester of 18.34% and this variations is the optimum conditions. The catalyst can use until five time with similar ability to catalyze reaction process.  While at 13% (w/w) of CaO catalyst the methyl ester product that resulted 2.41% (w/w) and more amount of the catalyst applied the product decreasing. Decreasing of the product caused by presence of the active catalytic cover each side by another catalyst. The active catalyst in the catalyst is a point where the reaction takes place [13]. 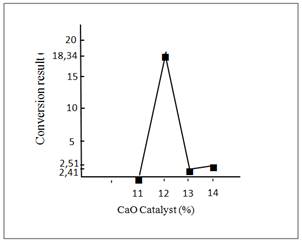 Figure 1. Correlation Percentage of the catalyst versus Conversion result of biodiesel.

3.4. Analysis of Biodiesel with Spectroscopic 1H-NMR

Analysis by 1H-NMR conducted to find out how much level of biodiesel resulted from transesterification of beef tallow with methanol. 1H-NMR spectra of beef tallow and biodiesel showed in Figure 4 and Figure 5. 1H-NMR spectra beef tallow (Figure 4) can be seen in their spectra appear at region 5-6 ppm which are protons around aldehyde group on long-chain fatty acids, and appears also that the proton spectra glycerides group shown at area 4- 5 ppm. 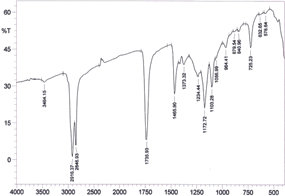 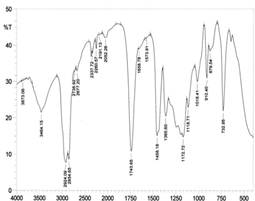 Spectra at region 1-2 ppm appear peak width and height, this peak occurs because protons in -CH2 fatty acids are so close that the chemical shifts also be too close to the tops of the result will merge into a singlet in which the tops of the middle of a multiples higher while peaks of the edge will shrink. It is also called the symptoms tilting or learning [14]. 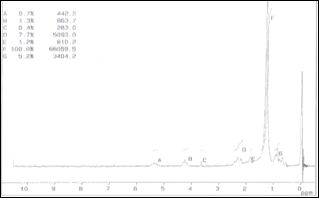 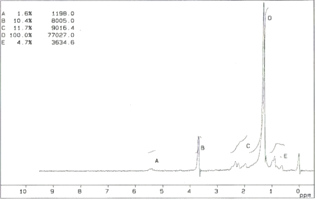 Biodiesel spectra obtained (Figure 6) only shows the spectra of glycerol in the 5-6 ppm region, and none in the region 4-5 ppm so that the equation used for the determination of biodiesel conversion is equation 1 [15].

=Integration of the peak value

Analysis by GC-MS (Figure 5) is used to determine the types of compounds contained in the methyl esters of fatty beef. This analysis produces spectral peaks respectively indicate the specific type of methyl ester.

Figure 6. Chromatogram of the methyl ester.

The main compounds which are major components of the compounds contained in biodiesel are seen from the large percentage of the compound. Other compounds resulting from the analysis by Gas Chromatography, chances are alkyl esters derived from fatty acids respectively. From the table above can be seen in the presence of 10 peaks are formed and of which there are three peaks of methyl esters of fatty acids that contain the largest percent of the area of which 18.86% methyl oleate, methyl palmitate 24.02%, and 40.65% methyl stearate.

Table 2. Comparison of the physical properties Of biodiesel from beef tallow.

Flashpoint is a number that states the lowest temperature of the fuel which ignition will occur shortly. Flash point of biodiesel from tallow is 178.5 °C greater than the minimum standard flash point of 130 °C, thus met with ASTM standard (ASTM D 93). High flash point is needed for fire safety during storage and transport processes [16].

Based on the research that has been done, can be concluded:

1.   Through the calcination process shells P. elongata at a temperature of 1100 ° C the conversion of CaO catalyst obtained at 51.9%.

2.   The optimum conditions of catalyst present in the percentage of 12%.

3.   Characterization of biodiesel produced from tallow by using a catalyst P. elongata include specific density, kinematic viscosity, flash point, and residual carbon Condradson still on range of the ASTM specifications are used, but the pour point has exceeded the ASTM standard specifications.