Abstract: The uses of wood and wood-based materials in everyday life ranging from domestic to industrial purposes have called for renewed updating of the information and knowledge on various thermal properties of the materials at various stages and classifications. This paper investigates the thermal properties (specific heat capacity and thermal conductivity) of some selected tropical hard wood species using the method of mixtures and the Lee’s Disk method respectively. The results show that the thermal conductivity of the selected wood species fall within the general range of 0.1-0.8 W/mK for tropical wood materials, with Celtis mildraedii having the least thermal conductivity of 0.08W/mk and Strombosia glaucescens the highest value of 0.392 W/mK. The specific heat capacity was highest for Holorrhena floribunda (1.97 J/g.K) and the lowest for Pterygota macrocarpa (1.01 J/g.K). These results can be used for testing the validity and efficiency of hard woods used for domestic and industrial applications.

Wood is a porous biomaterial which contains small holes and spaces that influence the mechanism of heat transfer (thermal conductivity) and specific heat capacity [1]. Wood can be bound or free and appears in a solid or liquid state [2] [3]. It consists of an organic composite material which is made up of cellulosic fibers and lignin.

Wood has a long history of use both as a solid fuel and as a construction material. Owing to temperature variations, the crystalline structure of chains may be altered, resulting in permanent loss in strength and considerable changes in physical behaviour, including its ability to conduct heat [4].

Thermal conductivity along the grain is significantly greater than across the grain. According to [14], the ratio of longitudinal versus radial conductivity is at 1.85 for mahogany air-dry. [15] determined a value of 2.05 for oven-dry pine at 20°C however, when the moisture content was 140 percent, the value was only 1.8.

A literature survey, however, reveals a very little of experimentaldata on thermal properties (thermal conductivity and heat capacity) of wood species grown in Ghana. The knowledge of thermal properties and other physical properties of the wood sample is very significant and paramount in the choice of wood samples that are suitable and thermally friendly for different building designs [17]. To promote the existing knowledge, this paper discusses thermal conductivity and heat capacity of thirteen (13) tropical hardwood species widely used in Ghana.

The wood samples were picked from the Pra-Anum forest reserve ((located between longitudes 1° 12’ and 1° 15’ W and latitude 6° 14’ and 6° 20’ N). The Pra-Anum forest reserve is underlain by three geological formations which are Lower Birim Rocks, Tarkwain System and Cape Coast Granite rocks. The prevalent soil series at the Pra-Anum Reserve is the Bekwai Series or the ferric acrisol (Bekwai Series). This soil is red, well drained, and sedentary in nature and found on summit and upper slopes where slope gradient lies between 3% and 12%. The soil profile consists of 15 cm to 45 cm of dark brown or dusky red, humous, porous, silty clay loam top soil which grades below into 60 cm to 150 cm of reddish brown or red, silty clay loam subsoil containing frequent quartz gravels and stones and ironstone concretions.

The study site is about 200 km2 in extent and lies between Asante Ofoase in the Ashanti Region and Akyem Ofoase in the Eastern Region of Ghana. The site has an equatorial type of climate with mainly woodland vegetation while thicket is intermingled with tall hardwood species. The average temperature is 22°C and with annual rainfall value of 15.5 mm.

The samples were made into discs of dimensions 10.0 cm diameter and 0.5 cm thickness for the determination of the thermal conductivities. For the determination of the heat capacities, the samples were re-worked into cubes of side 3 cm. In order to facilitate their easy handling during the experimental process small holes of 0.5 cm radius were bored from their midpoints. The samples were dried up at a room temperature of 28°C for a period of 180 days. During this time they were weighed continuously and their weights monitored until the rate of change in weight became less than 0.1% per day. They were then considered stable to changes in moisture content with time.

A total of 52 samples i.e. four (4) for each of the thirteen (13) tree species were used for the thermal conductivity measurements using Lee’s Disk method. The specific heat capacities of the remaining fifty two (52) samples were determined using the method of mixtures.

Each sample was sandwiched between the brass disk and brass base of the Lee's apparatus and the brass base was fitted to steam chest. In order to keep the heat loss from the sides to a minimum, the sample was made in the form of a thin disk with a large cross sectional area compared to the area exposed at the edge. Steam was passed into the apparatus and the steady state temperatures T1°C and T2°C were recorded. The brass base and the samples were then removed and the brass disk was heated directly on the heating chamber until its temperature was 7°C higher than that recorded in the steady state. The heating chamber was removed to allow the brass disk to cool down by placing an insulator on it. The temperature readings were then taken at intervals of 30 s until the temperature fell to about 7°C below the steady state temperatures. The cooling-curve was plotted and the gradient was determined from the temperature data obtained. Using [18] equations, the rate of heat flow through the wooden disc H (J/s) was given by

where S is the slope of the cooling (

) graph, m is the mass of the brass disk [kg], c is the specific heat capacity of the brass disk [J/Kg°C]; x is the thickness of each sample [m]; Ais the cross-sectional area of the sample [m2]; (T2-T1) is the difference in the steady state temperature [°C], K is the thermal conductivity [W/mk].

is an error term from the slopes calculation,

is the error term from the diameter,

is the error term for the thickness,

is the error from the temperature reading,

is the thermal conductivity of the material and

is the change in thermal conductivity of the material.

Ignoring the last term of (5) gives;

For example for Pterygota macrocarpa

Thus, the error associated with K was of the order of

where: cwd is the specific heat capacity of the wood species [J/g.K] mI is the mass of the Iron [g];

The cooling correction was determined from Figure 1 by

The final equation is then given as

The corrected temperature is given as 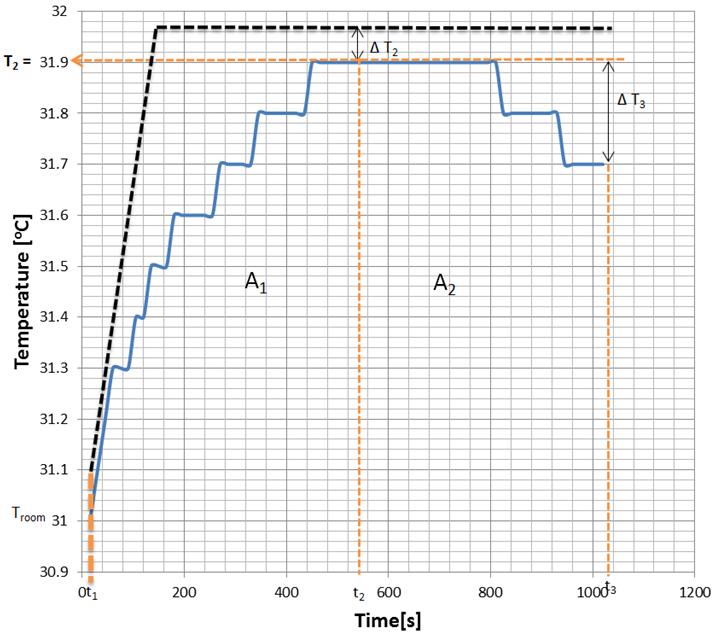 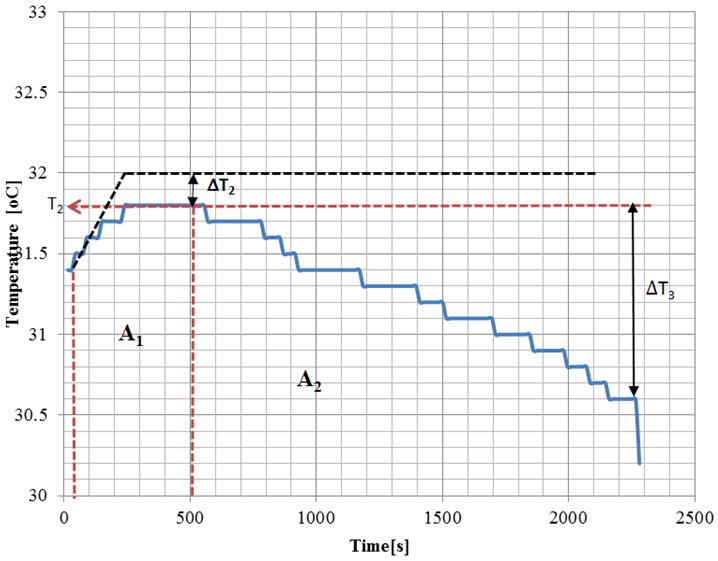 Table 1. The thermal conductivities of the various wood species with their percentage change in error.

Thermal conductivity is important in thermal insulation of buildings and related fields such as heat sink applications. It is a critical attribute when offering energy conserving building products because of the significant presence of wood and wood products in buildings. Lower thermal conductivity values equates to greater heat insulating properties [13]. Celtis mildraedii with the lowest thermal conductivity value out of allthe wood samples, possesses the best thermal insulating properties among the species which could be used as windows and doors of buildings etc. However, the higher the thermal conductivity value, the higher the overall heat transfer. Albizia zygia which was found to possess the highest thermal conductivity can be used in heat sink applications as a passive heat exchanger. It could also be used in cold and temperate regions where heaters are needed to stabilize room temperatures. Steady-state thermal conductivities are useful for comparisons among building materials for thermal efficiency. The temperature of the disc slab increases as the time increases up to stability for each disc. The equilibrium values of the samples are significant when a gradual decrease in the thermal conductivity results in corresponding increase in temperature with time. The rate at which thermal equilibrium was attained was found to be faster at the falling than for the increasing temperature. This effect could be attributed to the fact that initially, enough energy is required to break the bonds of the particles in the samples and on reaching their maximum excited positions and as the thermal energy reduces, the particles tend to return to their mean position.

Specific heat determines the heat absorption capacity of a material for a given rise in temperature. Heat capacity is effective in improving building comfort in any place that experiences daily temperature fluctuations. The high specific heat capacity of Holorrhena floribunda, Albizia zygia, Chrysophylum perpalchrum, Morinda lucida and Khaya senegalersis will enable them to store heat and aid in the re-emission of energy back into the building, saving energy and reducing costs.

Wood is the most commonly used building material in the world. Mostly used as trusses on which roofs of houses are built, other alternatives as steel are too expensive for construction. The above listed wood species could serve as reasonable alternatives since they are relatively cheap and in large quantity. In hot climates the use of these wood species will help in stabilizing or normalizing the room temperature for an extended time.

Figure 3 compares the heat capacities of the various wood species. The standard values are compared with the measured values by the formula: Heat Capacity of wood (Cwd) = (mwd) × (cwd) equation 8. Figure 3. A Plot of Measured and Standard Heat capacities against wood species.

Thermal Conductivity and heat Capacity of thirteen (13) different tropical hardwood species were measured experimentally by using Lee disk method and method of mixture, respectively. From experimental results, Celtis mildraedii had the lowest thermal conductivity whilst Holorrhena floribunda had the highest Specific heat capacity. A high thermal resistivity favors the wood specie as an interior building insulating material for naturally cooled building design in Ghana and elsewhere. The results obtained in general, revealed that the wood materials in the study possess good thermal properties. The thermal conductivities values for the samples were found to conform to the general range of conductivity for wood materials. This would assist building engineers in the choice of construction materials to adopt for effective use. The thermal conductivity of common structural woods and wood-based materials is much less than the conductivity of metals with which wood is often mated in construction. Building materials have evolved over the years therefore there is the need for continuous updating of the information on their thermal properties.

Heat capacity is effective in improving building comfort in any place that experiences daily temperature fluctuations. The high specific heat capacity of Holorrhena floribunda, Albizia zygia, Chrysophylum perpalchrum, Morinda lucida and Khaya senegalersis shall enable them to store heat energy and aid in the re-emission of energy back into the building, saving energy and reducing cost.

The authors are indebted to Forestry Research Institute of Ghana (FORIG) of the Council for Scientific and Industrial Research (CSIR) and the Logs and Lumber Limited (LLL), wood processing Company, Kumasi, Ghana for the provision of their Pra-Anum forest concessions to obtain the wood species. We are profoundly grateful to the Physics Department of Kwame Nkrumah University of Science and Technology, Kumasi for provision of laboratory facilities to process wood species for the results. Again, our sincere gratitude goes to Mr. Dwamena Akenteng and Mr. Isaac Larbi (WASCAL FUT-Minna) for providing various invaluable technical assistance. The facility provided by Physics Department, KNUST, and Kumasi, to store the samples for further research is gratefully acknowledged.