Abstract: This research aims to synthesize and characterize the PbTiO3 nanofibres by electrospinning technique. PbTiO3 nanofibre was fabricated onto Al-substrate by home-made electrospinning setup. The spinning or running time was set to 20 min. After spinning, subsequent annealing in oxygen and atmospheric ambient was performed at 600°C for 1 h and followed to form the PbTiO3 nanofibres. Surface morphology and fibres quality of PbTiO3 nanofibres were examined by Field Emission Scanning Electron Microscopy (FESEM). From FESEM image, the fibre diameter was measured to be (150-180 nm) with different collector distances. The experimental data resulted from this research showed that the home-made device compiled and growth chemistry was technically simple and easily adaptable.

In recent years, nanotechnology has become one of the most important and popular fields in research area of science subjects. On nanoscale, chemistry, physics, biology, electronic, materials science and engineering subjects start to converge and the distinctions as to which property a particular discipline contribute to understanding and exploiting the possibilities offered by nanotechnology. Nanoscale materials have been used for many decades in several applications and opportunities (Reneker and Chun, 1996; Li and Xial, 2003).

Nanotechnology is the experimental process of manipulating matter on an incredibly minute scale (one thousandth of a millimeter and smaller), in order to create new product and materials or delivery system. Fibres with a diameter of between 50 and 500 nm are generally classified as nanofibres. These fibres can be made from a wide variety of materials ranging from metals to ceramic to polymer. The National Science Foundation (NSF) defines nanofibres as having at least one dimension of 100 nanometer (nm) or less. Nanofibres are an exciting new class of material used for several values added applications such as medical, filtration, barrier, personal care, composite, garments, insulation and energy storage. Nanofibres of electrostatic polymers have received great attention recently because of their unique and useful properties. New and unrelated properties may arise from size confinement which may be important for several applications in electronic devices, optics and biomedical materials (Diarmid et al., 2001; Yun et al., 2004; Wnek et al., 2003).

Electrospinning technique uses an electric field to draw polymer solution from the tip of a capillary to a collector. A voltage is applied to a polymer solution, which causes a jet of the solution to be drawn toward a grounded collector. The fine jets dry to form polymeric fibres, which can be collected on a web. The electrospinning process has been documented using a variety of fibre forming polymers. By choosing a suitable polymer and solvent system, nanofibres with diameters in the range of 40-2000 nm can be made (Jinxian et al., 2009).

Nanofibres can be made of Lead Titanate (PbTiO3) by home-made electrospinning technique. In order to obtain these fibres, PbTiO3 powder is required and is proposed mainly from the lead nitrate [Pb (NO3)2], Titanium Dioxide (TiO2) and Potassium Hydroxide (KOH) used as the starting materials.

In this study, the experimental procedure was described in a block diagram as Fig. 1. Lead Titanate (PbTiO3) powder was prepared by classical hydrothermal synthesis at low temperature. In the present investigation, Lead Nitrate [Pb (NO3)2], Titanium Dioxide (TiO2) and alkaline aqueous solution of Potassium Hydroxide (KOH) were used as starting materials. In this research, 3 g of Pb (NO3)2, 0.6 g of TiO2 and 15 ml of KOH were mixed and stirred by magnetic stirrer for 2 h to be homogenous. This mixture solution was poured into Teflon-lined stainless steel vessel and heated at 120°C for 14 h. And then, it was cooled down naturally. In this way, PbTiO3 powder was completely obtained by hydrothermal synthesis. Crystal structure and phase identification of PbTiO3 powder was determined by X-Ray Diffraction (XRD). Surface morphological properties of PbTiO3 powder was characterized by Field Emission Scanning Electron Microscopy (FESEM).

After obtaining the fine powder, 0.85 g of PbTiO3 powder was dissolved in Poly Vinyl Alcohol (PVA). The mixtures of these were dissolved in distilled water. The mixture was stirred by magnetic stirrer for 5 h to form a homogeneous solution. After stirring, the temporary solutions were mixed at room temperature for 24 h to get a uniform solution. The solution was expected to be viscous enough for electrospinning. The precursor solution was taken in a syringe with hypodermic needle (0.55×25 mm). The hypodermic syringe needle was connected to the positive terminal of a high DC voltage generator that produce nearly 27 kV and the negative terminal of the power supply was connected to the collector (Aluminium foil) opposite to the syringe needle with distances about 9 and 10 cm. Al-substrate was then struck on the collector. Before supplying the power, glass tube was created as vacuum condition by using vacuum pump and also tested by vacuum tester. The high electrical potential overcomes the surface tension of solution in the syringe needle and jet of charged precursor solution was ejected out from the collector. The precursor solution was deposited on Al-substrate by home-made electrospinning method. And then it was heat-treated at 600°C for 1 h. Possible formation mechanism of PbTiO3 fibres was found. The schematic diagram of home-made electrospinning set-up is shown in Fig. 2. The morphology and grain size of the fibres were observed with Field Emission Scanning Electron Microscopy (FESEM). 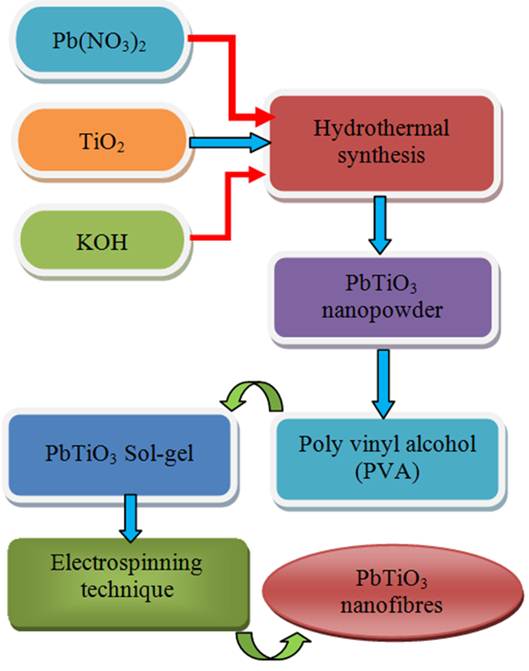 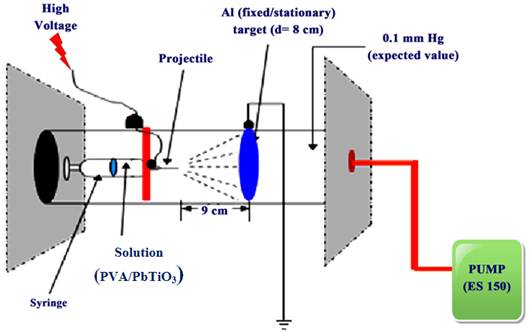 X-Ray Diffraction technique (XRD) is a powerful technique for determination of crystal structure, interplanner spacing. It provides simple nondestructive information on the nature of intermetallic and crystal phase usually in a very short time. The great deal of information about the crystallographic information of crystalline PTO powder has been studied by crystallite size. The XRD patterns of hydrothermal synthesized PbTiO3 specimens were perovskite type with tetragonal structure as shown in Fig. 3. Ten diffractions of the standard peaks were scanned within the diffraction angles range from 10°C to 70°C. Some extra peaks were formed on all XRD profile and they could not be identified. PbTiO3 powder was obtained and examined its phase formation by X-ray diffractometer using Cu-Ka radiation with wavelength of 1.54056 Å. All the peak heights and peak positions were in good agreement with the Joint Committee on Powder Diffraction Standards (JCPDS) in 49-0863> PbTiO3 library file. The intensity of (101) reflection was much stronger than that of the remaining peaks. The FWHM and crystallite-size of dominant peak (101) was observed. The FWHM and crystallite-size were 0.187 nm and 43.93 nm respectively. The lattice parameter (a and c) and lattice distortion (lattice strain) c/a of dominant peaks were described in Table 1. For the powder, 2q and d values were given in Table 2. The crystallite size was calculated using a well-known Debye Scherrer's formula. Thus, hydrothermal synthesized of PbTiO3 powder were successfully obtained with tetragonal structure.

Table 1. Lattice constant (a and c) and tetragonality (c/a) of PbTiO3 tetragonal structure. 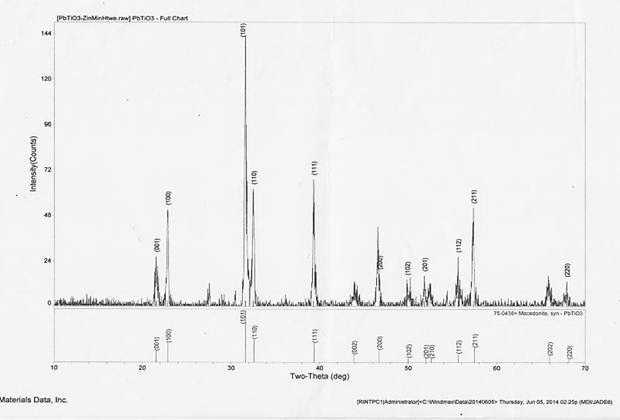 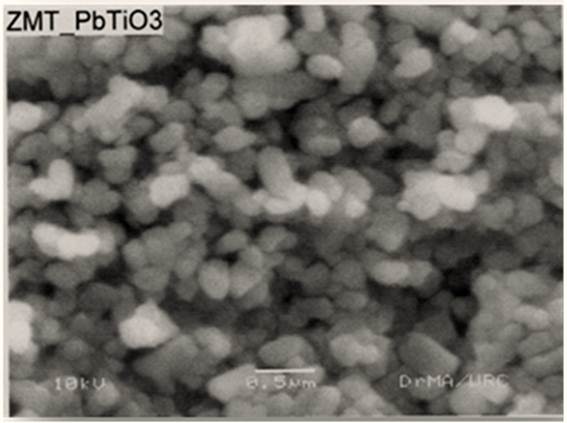 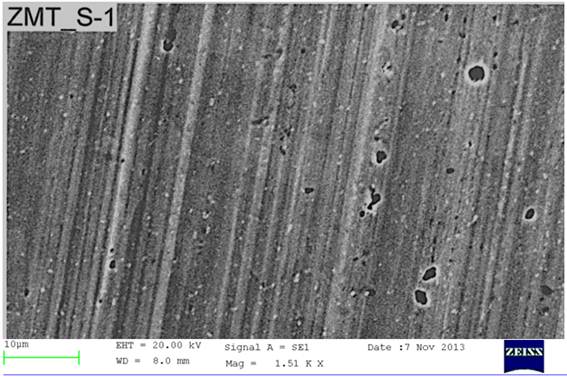 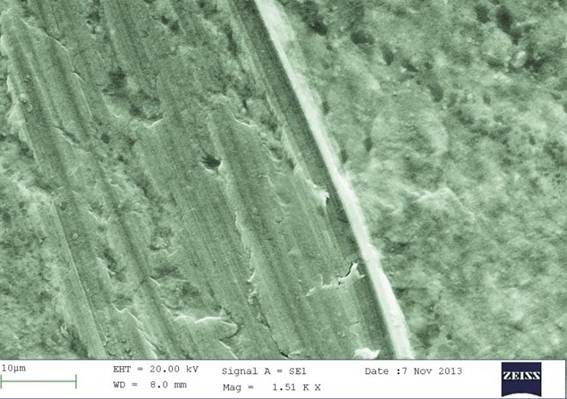 The image was smooth and seemed to be front-oriented and the grain distribution was uniform but some of grain sizes were slightly larger. Bubble-like morphology was examined in the case of PbTiO3. This result was due to the difference in the distribution of Pb and Ti components during processing. It was composed of regular and sphere grains with sizes ranging from (0.14 mm~0.28 mm) and uniform and crack free.

Lead Titanate (PbTiO3) powders were successfully prepared by hydrothermal synthesis at low temperature. In the XRD analysis produces the information on lattice parameters, FWHM, crystallite size and lattice distortion of the most dominant peak (101) were 0.187, 43.93 nm and 1.2039 respectively. The crystal structure of the prepared PbTiO3 powder was perovskite type with tetragonal symmetry. The FESEM results showed the surface morphology of powder homogeneity and exhibited well- defined grains with spherical shapes. Some grains were uniformly distributed by some porosity while some grains were in continuity. Grain growth pattern and some impurities were formed on FESEM image. Thus, the results obtained satisfied the requirements for the preparation of PbTiO3 powder for nanofibre applications. FESEM images indicated that the surface of the prepared fibre was smooth and the diameter of the nanofibre was about (150-180 nm) with different collector distances. The diameter of the fibres increases exponentially from 150 nm -180 nm at 600 °C as distance is increased from 9 cm to 10 cm. Figure 5 (a-b) showed the variation of the nanofibres with the distance. Therefore, PbTiO3 nanofibres with good morphology and suitable nanometer in diameter should be prepared at low annealing temperature. The morphology and diameter of the PbTiO3 nanofibres were depended on the temperature and various collector distances. Thus, PbTiO3 nanofibre was successfully formed by home-made electrospinning technique. The nanofibres should be some potential application of electronic devices, biomedical applications, nano-composites and bullet proof clothing.

We would like to thank all the people who encouraged and supported us during the undertaking of this research.