Nanofluids is a new class of engineered fluids which have contained suspended nanoparticles with their size less than 100 nm in the base fluids [1]. It provides more interesting application in industrial fluids system including as heat transfer, magnetic, and lubricant [2-5].

Due to their superparamagnetic behavior, maghemite nanofluids have been intensively investigated in recent year. It can be controlled using external magnetic fields [6]. With these characteristics, maghemite nanofluids performs as smart fluids which have possible for a wide range applications such as microelectronics [7], biosensor [8,9] and thermal applications [10]. They are also potential for magnetic seal, magnetic recording media [11], drug delivery or therapeutic agents in cancer therapy [12] and environmental [13].

In this study, the electrical conductivity of water-based maghemite nanofluids was measured at a different particle volume fractions and temperatures.

The concentration of nanofluids in volume is calculated from equation below:

: mass of base fluid

: density of base fluid

Electrical conductivity was measured by a 4-cell conductivity electrode meter (Eutech instrument PC 2700) with inbuilt automatic temperature compensation [26]. Prior to measurement, the meter was calibrated using the buffer solutions of known electrical conductivities. Measurements were performed in 30 ml of the sample in a cylindrical glass tube with the conductivity probe immersed in it. Samples were placed and exposed to water jacketed vessel that the temperature kept constant with a JEO circulating and refrigerating water bath and allowed in the bath for 30 minutes to get the desired temperature. Measurements were conducted and repeated five times at different temperatures and particle volume fractions. 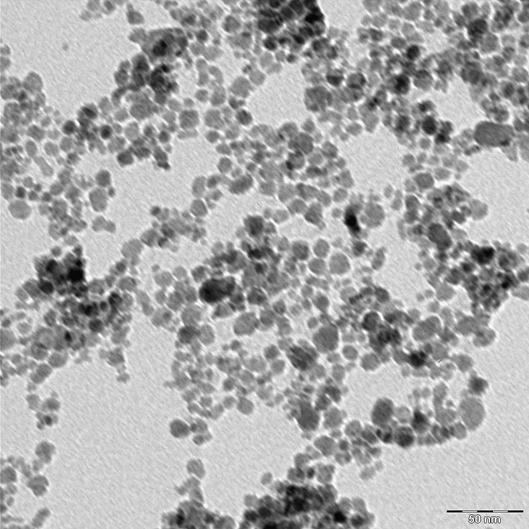 This phenomenon is because, the electrical conductivity of nanofluid exhibits a complicated dependence on the electrical double layer, EDL [27]. This EDL is due to the development of surface electrical charges when maghemite nanoparticles are suspended in a polar liquid. Ions with opposite charge to the particle surface are attracted are creating a charged diffuse layer around the particles. The surface charge of the particles, as well as ion-cloud that constitutes the EDL are actively plays a part in the enhancement of conduction. The existence of uniformly dispersed nanoparticles is considered by reduced equivalent particulate masses, leading to increased electrophoretic mobility. Consequently, it enhance the electrical conductivity of the maghemite nanofluids. By increasing of particle volume fraction in the solution, more conducting pathway in the solutions ere formed. That, in turn enhances the overall electrical conductivity of the solution. 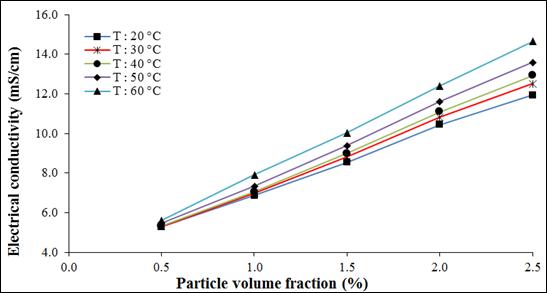 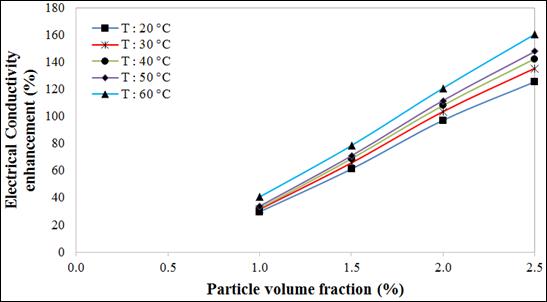 Increasing the solution’s temperature will decrease its viscosity and enhance the ions mobility. Furthermore, it could also increase the number of ions in the solution due to molecules dissociation. As a result, this will lead to an increase in its conductivity.

These results are in good agreement with published data on other nanofluids [21,22,28,32]. However, the findings do not correlate with the Maxwell [33] and Bruggeman models [34] due to these models do not take into account the increasing of temperature. This observation is also supported by Sundar [35]. 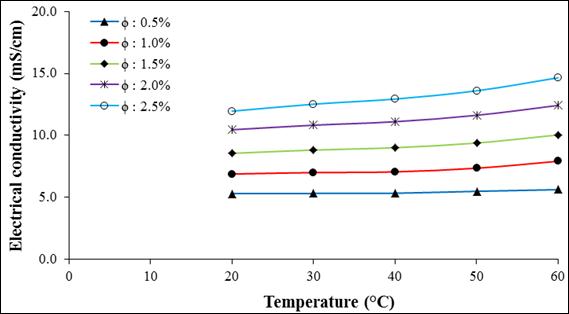 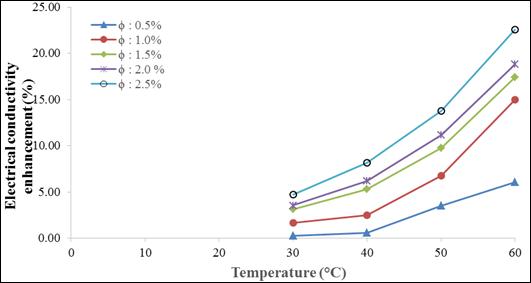 This work was funded by Ministry of Research, Technology and Higher Education of the Republic of Indonesia under project no. 036/PL20/R8/SP2-PF/PL/2016.