A solar module is a collection of a solar cell which is a device that converts the sunlight into an electric current [1]. The solar module of silicon was still the most widely used solar cells device because of the advantages of Silicon over any other materials [2-5]. The electrical output under illumination from the solar cell is described by the (I-V) characteristics whose parameters can be linked to the material properties [4,6-9].

Most silicon solar cells are designed to work under normal sunlight and their performances are evaluated at 250C under an AM1.5 solar irradiation of 100 mW/cm2intensity. Also, as stated earlier, the two diode model is most commonly used to describe the I–V characteristics of a cell [10].

Solar cell parameters including: short-circuit current (ICC), open-circuit voltage (VOC), efficiency, series resistance (RS) , shunt resistance (RSh) and ideality factor (A) could be changed due to light intensity and temperature variations [11-14]. In the current paper we present the effect of temperature, RS and RSh on the (I-V) characteristics simulated in Matlab / Simulink.

The two-diode model represents the recombination losses occurring in the junction of solar cell (Fig. 1).

Using law of Kirchhoff’s, the total output current from the solar cell is given by [15]:

The two diodes model consist two saturation current i.e. Is1 and Is2. 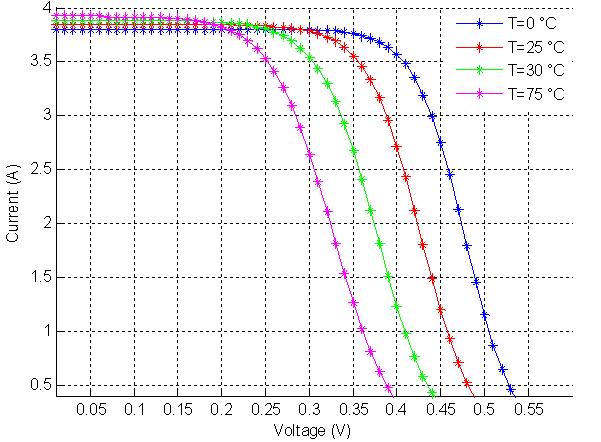 Fig. 3 shows the RSh effect on (I-V) characteristics of monocrystalline silicon results in a minor reduction of the open circuit voltage, and an increase in the slope of the (I-V) of cell in the area corresponding to operation as a power supply. This is because it should subtract the photocurrent, besides the diode forward current, an additional current which varies linearly with the developed tension. 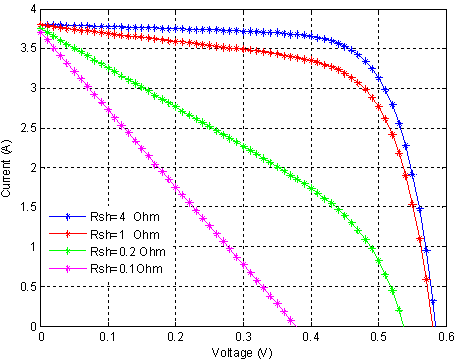 Fig. 4 shows the RS influence on the (I -V) characteristic of monocrystalline silicon solar cell. The series resistance is the slope of the characteristic in the area or the photodiode behaves like a voltage generator. It does not modify the open circuit voltage VOC and when it is high and decreases the value of the short-circuit current. 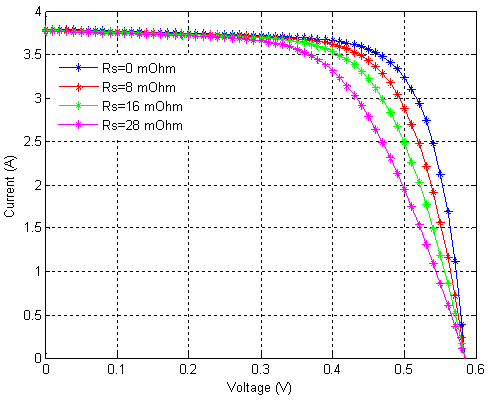 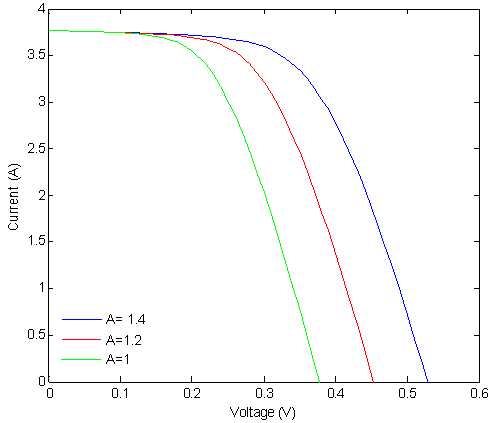 Fig. 5 shows the A influence on the (I -V) characteristic of monocrystalline silicon solar cell.

A perfect match to theory is indicated when n = 1. The effect of changing ideality factor independently of all other parameters is shown for a monocrystalline silicon solar cell in the (I -V) curves displayed in the Fig. 5.

Most solar cells, which are quite large compared to conventional diodes, well approximate an infinite plane and will usually exhibit near-ideal behavior (n ≈ 1).

We have investigated the effect of temperature, series resistance and shunt resistance on the current-voltage (I-V) characteristics simulated in Matlab / Simulink. From the results obtained, it can be concluded that the VOC decreases with temperature, RS does not modify the open circuit voltage and the RSh effect that a minor reduction of the VOC. Temperature impacts significantly on open circuit voltage but almost has no effect on short circuit current.