Abstract: About 16.05% of the adult population in Bangladesh suffers from mental illness. 74% of these mentally impaired patients live in rural areas and are socially disadvantaged. Studies have identified mental disorder to be a risk factor for involuntary weight loss and malnutrition. This study aims to explore the differences in nutritional status among women suffering from mental illness from urban and rural areas based on their socio-economic status. This cross sectional study has been conducted for over a period of four months that covered six divisions of the country. A total of 73 participants aged from 15-60 were purposively selected to represent urban & well off population and the rest 73 were selected to represent rural & socially disadvantaged population. Height, weight and BMI were significantly lower in all participants from rural settings. About 18% of all participants from rural areas have a BMI 18kg/m2 or less. Mean body fat percentage (BF%) is significantly higher in all subgroups from urban areas (P<0.001) comparing to those from rural settings. No significance was observed in EI:BMR ratios. Mean EI:BMR ratio was over 1.4 in all subgroups from both urban and rural settings except for 46-60 years participants from urban areas. The highest EI:BMR ratio has been observed in the subgroup of 31-45 years aged women from urban areas. The study has identified that mentally impaired women even from well off families or from urban settings have an inferior nutritional status comparing to those of healthy women from same settings. The nutritional status of mentally impaired women from rural areas or from lower socio-demographic settings is even worse. Low BMI and low energy intake indicates vulnerability of mentally impaired women to malnutrition in Bangladesh.

Bangladesh is world’s eighth most populated country and fifth most populated country in Asia. Total population of the country as of 2016 is 162,903,941 [1]. The country consists of Eight divisions and sixty-four districts [2]. Despite progress made in this sector malnutrition rates in Bangladesh are among the highest in the world. Malnutrition among women is also extremely prevalent. Over 50% women in the country suffer from chronic energy deficiency [3]. Negative energy intake and chronic energy malnutrition are even higher among women low socio-economic group specially from rural areas [4,5]. Studies suggest that this situation has seen little improvement in past 20 years.

Prevalence of mental illness varies from 6.5% to 31% among adults in Bangladesh [11]. According to national mental health survey conducted in 2003-2005, about 16.05% of the adult population has been suffering from mental illness. Following the survey mental health policy, strategy and plan have been approved in Bangladesh in the year 2006. 39% of the population is under the age of 15 and 6% is over 60 years. Alarmingly 74% of these mentally impaired patients live in rural areas and are socially disadvantaged. The majority of the patients seeking medical help are psychotic. The neurotic patients most of the times do not seek medical help due to social stigma and therefore remains undiagnosed and suffer from various physical health problems including malnutrition [12]. Both urban and rural groups possess a higher vulnerability of mental illness among women compared to men [13]. Prevalence of mental illness among women are even higher among economically disadvantaged group and in rural areas [11,14]. Several studies have been identified comparing nutritional status of women from urban and rural areas in Bangladesh [15,16]. But little published data has been identified in literature review comparing malnutrition status of women suffering from mental illness in urban and rural areas in Bangladesh. This study therefore, aims to explore the differences in nutritional status among women suffering from mental illness from urban and rural areas based on their socio-economic status. The findings of the study are believed to develop a better idea about malnutrition status among mentally impaired women in Bangladesh. This will eventually lead to develop better policy to understand needs of this disadvantaged group both at the country level and internationally.

The study was conducted over a period of four months, starting from 18 February 2015 to 21 May 2015. This is a cross sectional study that covered six divisions out of eight of the country. The rest of the two divisions could not be covered due to shortage of time and finance. Therefore, the study areas were selected purposively. Three divisional headquarters were selected to represent the urban population and three upazillas from other three divisions were selected to represent the rural study population. Ethical Approval was taken from Ministry of Health and Family Welfare and from corresponding Civil Surgeons of selected districts.

A total of 146 mentally impaired women aged from 15-60 were selected. These women have been identified through psychiatrists working in these selected towns and other NGOs working with mentally impaired patients. Among the study participants 73 were from urban areas who were purposively selected to represent the well off group of the country. These patients belong to households in which family members either hold a government or non-government job or own a business. All of these participants lives in buildings equipped with modern facilities. The rest 73 were also purposively selected and were from three upazillas who represent the disadvantaged group of the society. These participants belong to households where family members are day-labourers or housemaids or possess small business.

At first stage of the study a questionnaire was developed to address the economic status, status of mental impairment, additional health issues and age of onset of mental illness and level education if any. Due to their mental impairment informed written consent was taken either from parents or in absence of parents from other legal guardians of all study participants. Information on the participant’s energy intake has been collected using local family planning assistants (FWAs). The FWAs were first given idea on questionnaire and were later taught on data collection procedure, specially on how to take height and weight measurements. Later they have collected data during their visits to the participants’ houses.

The FWAs collected data on dietary habits and daily energy intake on three separate house visits. The participants were informed on the day of house visit to minimize bias as they might have a tendency to alter diet if they would knew about house visits earlier. Height and weight measurements were taken on the first and the last visits. Height and weight were used to calculate Body Mass Index (BMI) as recommended by World Health Organisation (WHO) and Centres for Disease Control and Prevention (CDC). The equation to calculate BMI:

Basal Metabolic Rate (BMR) was calculated using Harris-Benedict equation which was revised by Mifflin and St. Jeor in 1990 [18]. This equation has been used since it has been proven to be more accurate than other existing formulas and also considering the fact that taking skin fold thickness for calculating BMR will be difficult from mentally impaired patients as they might not be willing to go through the physical examination.

Mifflin and St. Jeor equation for calculating BMR in women:

For calculating Body Fat Percentage (BF%) the following equations has been used for the same reasons mentioned above. 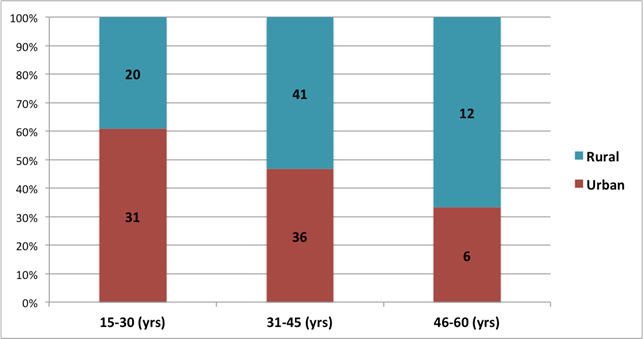 Table 1. Age of onset of mental impairment and percentage of total participants.

This study has identified several associated diseases in women from both urban and rural settings (table 3). In both settings a major portion of women with mental illness are suffering from diseases arising from lack of cleanliness or self-hygiene. About 24% women from urban areas and 37% women from rural areas are suffering from skin diseases like Psoriasis, Seborrheic Eczema, Scabies and fungal infections. Prevalence of other chronic diseases is common among these patients. 37% women with mental impairment in urban areas have multiple chronic conditions and for rural areas the number is even higher (44%). These chronic conditions include cardiovascular diseases, diabetes, asthma, chronic urinary tract infection etc. Alarmingly for 22% women suffering from mental illness in rural areas have undiagnosed underlying chronic diseases. 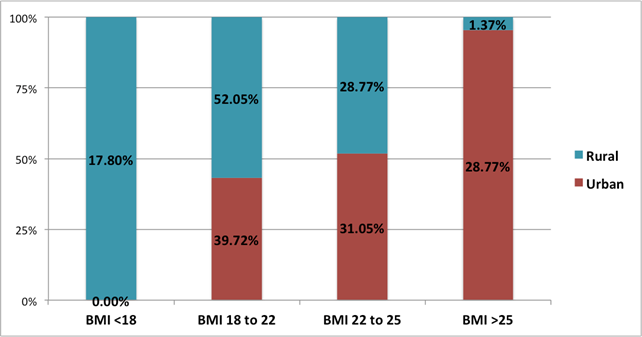 Socio-economic status was addressed depending on family income level. In Bangladesh though the situation has changed in past two decades yet a major portion of the women living in rural areas depend on the male member of the society for financial support. This situation differs in urban areas, as a major portion of the women living in urban areas is either government or non-government jobholders [15]. But for women with mental illness, they have to depend solely on the family, which is true for participants from both urban and rural settings. Age of onset of mental impairment is found to be significantly higher from 31-45 years in both urban and rural settings. A major portion from both settings also falls into the 15-30 years age limit. The lowest number falls in 46-60 years age limit. This may indicate an early onset of mental impairment among women despite of their socio-demographic status.

In rural settings, over half of the total study participants are either currently married or have been married at some point of their life. This number is significantly low among participants from urban settings comparing that of rural areas. Divorce rates are much higher in both urban and rural areas for women with mental impairment who has got married, 36.84% and 43.59% respectively. Among the women who have been married 84.61% from rural areas and 63.15% from urban areas have one or more children. Pregnancy rates among women with mental impairment seem to be much higher among participants living in rural areas.

For study participants both from urban and rural settings prevalence of multiple chronic conditions is very high. This study has identified that though mentally impaired women from rural settings have higher prevalence of chronic disease they are less taken care of. Often this is due to negligence from family members or sometimes due to financial inability of the family. Therefore, a major portion of mentally impaired women from rural settings has undiagnosed underlying chronic diseases. Prevalence of skin diseases is found to be very common among study participants from both settings. An explanation to this could be their lack of self-hygiene and cleanliness. This study has identified that many of these women are not under regular medical follow up or medication despite of their ongoing physical symptoms.

The study has identified differences in dietary intake depending on socio-demographic status. Mentally impaired women from rural settings have low daily food consumption and this group lacks in dietary patterns comparing to urban settings in average protein, fat and vitamin consumption. Only in case of carbohydrate consumption not much discrepancy is observed in this study among urban and rural women with mental impairment. Energy intake is considerably higher among women with mental impairment from urban areas comparing to those from rural settings. This finding is somewhat similar as reported in other studies conducted among healthy women from these two settings [15,20].

Minimum energy expenditure of an individual when not engaged in any regular physical labour is 1.4 times the BMR [21]. Except for one subgroup in this study all other subgroups reflect this hypothesis. For the women from 46-60 years in urban settings having a EI:BMR ratio of 1.19 might be due to reduction of energy intake on the day of data collection.