Chitra Jeba, Joshi Diker Dev. Comparison of the Effect of Neural Mobilization and Kinesio Taping on Pain and Quality of Life in Subjects with Sciatica – A Randomized Clinical Trial. International Journal of Neurologic Physical Therapy. Vol. 2, No. 3, 2016, pp. 19-23. doi: 10.11648/j.ijnpt.20160203.11

Radicular pain in the distribution of the sciatic nerve, resulting from herniation of one or more lumbar intervertebral discs, is a frequent and often debilitating event. The lifetime incidence of this condition is estimated to be between 13% and 40%[1]. It is an often disabling and painful condition which is a major cause of disability, work loss and presentation to health-care[2]. It is usually caused by biomechanical strains[3], disc herniation[4] and morphological abnormalities of intervertebral disc[5]. There is huge physical and economic impact due to sciatica[6]. Various interventions that reduce the sciatica symptoms have been identified which includes both surgical and non-surgical methods[7]. Most common medical management is epidural steroid injection[8] whereas surgical management is done by lumbar spine operation[9]. Several randomized controlled trials comparing surgical and non-surgical interventions to reduce the sciatica symptoms have been conducted. But improvement in the patient’s predominant symptom and work and disability outcomes were similar regardless of treatment received[10,11]. Kinesio taping and neural mobilizations are two commonly used modes of treatment for sciatica[12]. Though both these treatments are seen to be effective in reducing the symptoms of sciatica, comparative study between these two techniques is lacking.

With regard to the paucity of trials comparing the effect of neural mobilization and kinesio taping, the purpose of this study was to compare their effects in reducing pain and seeing the effect in quality of life in peoples with sciatica. We hypothesized that either both treatment will be equally effective or one will be superior to other.

A randomized clinical trial of 2 week neural mobilization and kinesio taping was conducted over 3 months period from November 2015 to January 2016. Participants were recruited from Tertiary Health Care Hospital. Subjects participated in an assessment session, followed by random allocation to either of the groups by envelope method. Both neural mobilization and kinesio taping group were given treatment for 3 times a week for 2 weeks. Sensory TENS was given to both groups of patients. All subjects were reassessed after 2 weeks.

Thirty five subjects with sciatica (SLR +ve for <=70°) who were referred by Neuro medicine department for treatment of Sciatica were recruited. All patients were in on-medication state for reducing pain during enrollment, 20-60 years of age, both males and females with pain radiating up to the sole of foot and Visual Analogue Scale score greater than 5. Subjects were excluded if they had history of recent trauma to lower limb, associated neurological symptoms like foot drop, Spondylolisthesis, Cancer, SI joint dysfunction and cognitive impairment.

All participants signed informed consent approved by KLEUIPT’s Institutional Review Board. All work was done in accordance with declaration of Helsinki (1964). This clinical trial was conducted in between November 2015 and January 2016.

Subjects were randomly allocated to either of the groups by envelope method. The person responsible for pre/post testing remained blinded to group assignment.

During the treatment session, subjects were either given neural mobilization or Kinesio taping by the same therapist. The treatment was given thrice a week with one day interval with rest on Sunday’s. To ensure an adequate level of treatment all sessions for all participants were given in hospital setting only with proper instructions given to both patient and attender of Kinesio taping group not to apply any lubricant and Soap in the area of Tape. Cotton Kinesiology tape named ‘Nano Tape’ was used for taping group with tape applied from sole on the lateral area till L3 spine throughout the course of Sciatic Nerve. For Neural Mobilization group Grade 4 Maitland mobilization for all branches of sciatic nerve i.e. Tibial, Common Peroneal, Sural, and Saphenous Nerve by taking the foot into Dorsiflexion, Plantarflexion and Inversion, Dorsiflexion and inversion and Dorsiflexion and Eversion respectively was given. Sensory TENS (Sl no. TG 1446, Manufacturer: Technomed electronics) of frequency 4 Hz and pulse duration 0.1s was given to both group of subjects for 15 minutes after the initial treatment. 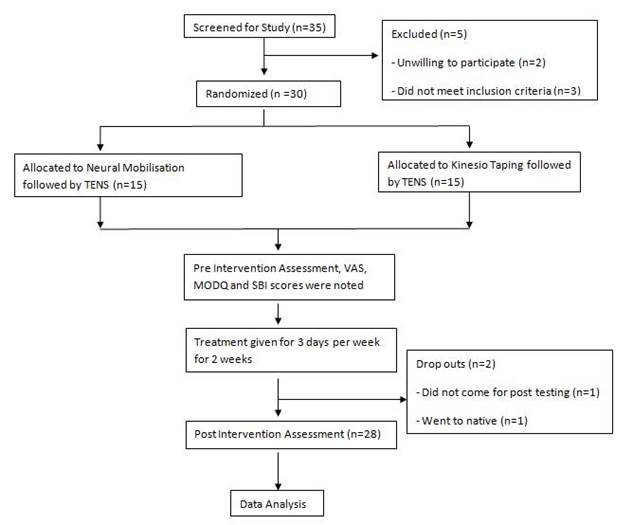 Subjects from both groups were assessed for pain using Visual Analogue Scale (VAS). The recordings were taken before starting the treatment and after the treatment session of 2 weeks. Patients were asked to mark their pain on a straight horizontal line with 0 marked at the beginning of line and 10 marked at the end point. Subjects were explained that the marking were in increasing order of the pain. It is a valid, reliable and responsive scale.[13]

Bothersomeness of Sciatica was measured by Bothersomeness of Sciatica Scale (SBI). It is a 6 point scale consisting the four components of sciatica i.e. Leg pain, Numbness or Tingling in leg, foot or groin, Weakness in leg and Foot and Back or Leg Pain while sitting. Subjects were asked to tick in one of the point for each component. SBI has extremely good reliability and Validity[14].

It was measured by using Modified Oswestry Low Back Pain Questionnaire (MODQ). It is a scale consisting 10 sections. Each section has 6 points in increasing order of severity. Subjects ticked in one point for each section. MODQ has good reliability and validity[15].

Thirty patients with Sciatica were enrolled and 28 completed their study. 1 patient withdrew as he went to his native place and other one did not come for post testing. Seventy one percent of participants were female with the mean age 41.

There was only one adverse effect noticed during the treatment period. Pain was noticed in neural mobilization group immediately after the treatment which subsided maximally within a day.

The results of this study show that neural mobilization technique was more effective than kinesio taping in reducing the symptoms and improving the quality of life in persons with sciatica.

Comparison of neural mobilization and taping groups with respect to VAS score showed the significant reduction of pain in neural mobilization group. This could be due to instantaneous pain relief noted among the subjects of Neural mobilization group and also as few subjects applied soap or lubricant in the area of tape despite cautioning them not to. Although no significant group difference was noted in SBI scores there was significant reduction of scores in neural mobilization group than in taping group. The within group difference was significant for both the groups. This can be due to the fact that though neural mobilization was able to reduce leg pain, numbness or tingling and back or leg pain while sitting components it had very less effect on weakness in the leg component. Also there was significant improvement in quality of life of subjects in terms of lower MODQ. The questionnaire has 10 sections and few sections in the questionnaire could not show any improvement compared to others. This could be due to small duration of intervention and a follow up of the subjects need to be done to check the carry over effect of the intervention on quality of life. It was observed that sections of pain intensity, personal care, sitting, standing and sleeping showed improvement compared to the other sections of questionnaire. A statistical analysis between the sections was not done which can be considered as a limitation of the study.

There were few other limitations in this study including small sample size. Despite a small sample, significant improvements were seen in both the groups. The account of dosage of medications for pain relief was not taken. Although full details about the scales were given yet the result relied on patients report.

The authors have reserved the right to acknowledge the people who have been instrumental in the tedious task of bringing this study to completion. We express our sincere gratitude to Dr. Sanjiv Kumar, MPT, PhD, Department of Neurology, for constant, incessant encouragement and genuine concern, suggestion and support, which resulted in shaping this study. Additional names to be acknowledged includes Dr. Jorida Fernandes and Dr. Sangita Shrestha. With great respect, we extend our special thanks to all teaching staff for all the help and advice rendered to us during the study period. The authors would like to thank all the participants for giving the valuable time and for supporting us to carry out the study.