Abstract: Mesenchymal chondrosarcoma (MC) is a subtype of chondrosarcoma which is rarely encountered in the clinical practice. It carries a worse prognosis compared to other forms of chondrosarcoma as it has a high tendency to metastasize to other sites.1 It can arise from skeletal bone as well as soft tissue, the usual sites being the ribs and jaw.2 Histologically, it is characterized by a mix of cartilage and undifferentiated stromal tissue, which will be highly positive for S100. A survey done concluded that it commonly affects patients in their second or third decade of life.3 We will discuss a rare case of MC which presented to our center where the initial biopsy was reported as hemangiopericytoma (HPC) of nose. The tumour was excised using endoscopic assisted craniofacial resection (EACFR). A multidisciplinary team comprising of various specialties was involved in diagnosing and managing the patient.

Chondrosarcoma represents 10 to 20 percent of primary bone tumours where primary head and neck involvement constitutes 10 percent of all chondrosarcomas.4 It has many subtypes including mesenchymal chondrosarcoma (MC) which is a rare neoplasm that tends to affect the head and neck region. It has been described to be an aggressive tumour with high tendency of recurrence and metastases. Histologically, it shows cartilage formation as compared to malignant vascular tumour with pericytic differentiation as seen in hemangiopericytoma (HPC). However, as demonstrated in this case, because of uncertainty of HPC immunohistochemical profile, the diagnosis is controversial and histologically confused with other differential diagnosis such as MC.5 Hence, multidisciplinary approach including sessions of histopathological conference are needed to establish the diagnosis as well as in managing the patient. We shall describe here a rare case of MC including its presentation, diagnosis and management.

A 33-year-old male with no significant medical history was referred to our centre from another hospital with a history of sudden onset loss of vision of the left eye after waking up in the morning. Prior to this he also noted that his left eye was protruding for a few months, however he did not seek for any medical attention. He denied any nasal, facial or constitutional symptoms. He had no headache, precipitating eye symptoms or trauma previously.

Physical examination revealed proptosis and limited movement of the left eye. The pupil was dilated and fixed with no evidence of exposure keratitis noted. The right eye was normal. Other cranial nerves examination was unremarkable. Facial, ear, neck and other cranial nerves examination was unremarkable. Nasal endoscopy showed a whitish mass with contact bleeding filling the whole left nasal cavity. The right nasal cavity was normal. Flexible nasopharygolaryngoscopy (FNPLS) showed no mass in the nasopharynx and the laryngeal structures were all normal. Tissue biopsy was taken from the left nasal cavity which was reported as HPC of the nose.

The patient subsequently underwent a magnetic resonance imaging (MRI) of the brain and orbit which showed a large heterogenous mass measuring 7.5cm X 6.8cm X 8cm with epicenter at the left cribriform plate and involving the left sphenoid bone. It occupied the left nasal cavity and sphenoid sinus extending into the extraconal space of the posterolateral aspect of the left orbit. There was also a large intracranial extension in the left frontal region with dural tail. The mass was displacing the optic chiasm and the left middle cerebral artery posteriorly. Ultrasound of the abdomen and chest radiograph were normal.

Ophthalmology and neurosurgery input were obtained. Subsequently, the patient underwent EACFR for tumour removal using cold instrument. Intraoperatively, the extensive tumour was noted to erode the planum, clivus, posterior ethmoid and sphenoid. Its extension to the brain was mostly extradural. Some remnant of the tumour was unsafe for removal and thus was left behind. Post-operatively, the patient was covered with intravenous antibiotics and a lumbar drain was placed. The patient had an uneventful recovery and was discharged home four days post-surgery. The patient was also treated with doxycycline by the oncology team and upon clinic follow-up at 2 weeks, the patient was well and nasal endoscopy revealed a healing nasal cavity. 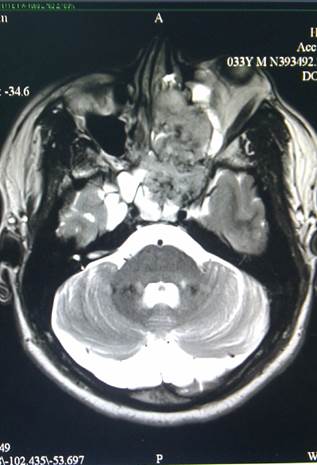 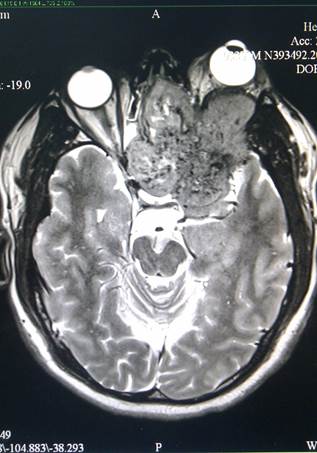 Figure 2. Axial MRI scan section showing the nasal mass extending into the extraconal space of the posterolateral aspect of the left orbit with intracranial extension. 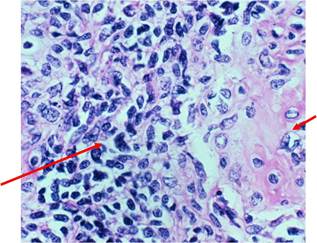 The histopathological examination of the tumour showed malignant cells with some scattered stag horn blood vessels. There were also neoplastic cartilages which infiltrated into the adjacent bony trabeculae. It was positive for S100 stain suggesting it to be a MC of the sphenoid sinus. This specimen was compared to the earlier biopsy specimen where it histologically showed similar tumour tissue. The earlier specimen showed large nuclei of cartilaginous appearance with subtle malignant features together with vascular HPC like pattern and this is suggestive of HPC. However subsequent final staining of these large nuclei was highly positive for S100 indicating it is cartilaginous in origin, hence making it to be more likely a MC rather than a HPC as the final histology report.

Only 0.2 to 0.8 percent of all neoplasm of the body originates from the nose and paranasal sinuses and chondrosarcoma constitute only 4 percent of non-epithelial tumours of the nasal cavity, paranasal sinuses and nasopharynx, making it to be considered as one of the rarest malignancy.6 MC which is a subtype of chondrosarcoma is even rarer. It was first described by Lichtenstein & Bernstein7 where the histopathological appearance showed clusters of highly undifferentiated mesenchymal cells interspersed with small islands of well differentiated cartilaginous tissue with or without calcification and metaplastic bone formation.

Previous trauma, irradiation, multiple hereditary exostosis, Ollier’s disease, Maffucci’s syndrome, Paget’s disease of the bone, chondromyxoid fibroma and exposure to beryllium has been linked to this condition, however the real etiology is still unclear.4 Our patient had none of these conditions. In the head and neck region, MC commonly occurs in the maxilla, mandible, nasal septum and paranasal sinus.8 Among the paranasal sinuses, sphenoid sinus is the least frequently affected. When it occurs, as in this case, it can extend to invade the eye, brain, nose and face due to its anatomical relation. Some literature reported that it has a slight male predominance while others reported that it is equally distributed.

The radiological appearance of MC is not characteristic, as it will appear as any other malignancy consisting as heterogenous mass with poorly defined borders. Calcification or ossification process will appear as foci which is usually multiple within the heterogenous mass. Frequently it will also show extension between the osseous trabeculae of the preexisting bone without resorption.8 On MRI, MC will demonstrate high intensity signal on T2-weighted images due to its high water content. However, when compared to computed tomography (CT), MRI is less consistent in distinguishing MC from any other tumour. Appropriate knowledge of the disease and clinical assessment are crucially important to interpret the radiological findings in this condition.

Despite its rarity, a high level of awareness is needed by clinicians regarding this neoplasm especially given its nature to be aggressive and present in a younger population. Presenting symptoms can be non-specific, especially in the head and neck region presenting as headache and chronic sinusitis. Left proptosis was due to the late pressure effect of the tumour which had affected his vision. The extensive size of the tumour during the presentation has made it impossible to be resected in total. Some remnant of the tumour was left behind intra-operatively due to its close proximity to vital structures.

Multidisciplinary approach should be implemented in managing this rare tumour apart from radical resection as its mainstay treatment. EACFR is a highly useful surgical technique to avoid the unsightly facial scar of the lateral rhinotomy or the Weber-Ferguson incision, post-operative paranasal sinus infection and reduces hospital stay.9 As demonstrated in this case, early referral to the ophthalmology and neurosurgery team has led to appropriate eye care and surgical intervention. Apart from that series of histopathological conferences involving the clinicians and pathologists have led to the appropriate diagnosis. The role of chemotherapy has been controversial in managing chondrosarcoma, however it has been used for MC due to its high risk of metastases where anecdotal partial responses have been published.10 Combination of radiotherapy and chemotherapy has been used to treat tumour which is not resectable. However to date, very small numbers of case series involving head and neck chondrosarcoma have been published.10

The initial biopsy before the surgery was reported as HPC for differentiating it from any other form of malignancy has proven to be a histopathological challenge. Some reports have suggested that HPC is over-diagnosed. HPC, as compared to MC is a vascular tumour arising from mesenchymal cells with pericytic differentiation. Pericytes are cells that are present external to the endothelial cells of capillary or venules that help the vessels in changing the caliber of their lumen.11 However due to its non-specific immunohistochemical profile and also malignant potential and recurrence, it is difficult to distinguish it from MC or any other malignant tumours. Other differential diagnosis for HPC apart from MC includes fibrous histioma and synovial sarcoma. Hence, as described in this case the final histology staining was crucially important. The high positivity towards S100 stain has pointed that the tumour is most likely to be cartilagenous in origin concluding that the diagnosis is most likely a MC rather than HPC. Nevertheless, for both cases, radical resection is the mainstay of treatment.

This case has demonstrated that awareness and knowledge of this rare malignancy is important. Earlier presentation might help in preserving the function of the affected organ. The patient did not seek for any medical treatment after noticing proptosis of left eye for a few months. Nevertheless, appropriate diagnosis, management and timely intervention have helped to prevent the patient from more serious sequelae. The importance of multidisciplinary approach in managing this case cannot be over emphasized. Although the patient was discharged home after an uneventful post-surgery recovery, early and frequent follow-up is needed knowing the notorious nature of MC as recurrent disease is more difficult to treat.