The Management of the Retention of Giant Subfoveal Perfluorocarbon Liquid

Abstract: The aim of this report is to present the outcome of the surgical removal of a giant subfoveal retained perfluorocarbon liquid (PFCL). The case is a 65 years old man undergone pars plana vitrectomy and silicone oil implantation for macula-off superior retinal detachment about three months ago. He admitted our clinic with a complaint of gradual visual loss in the left eye. His visual acuity in the left eye was at the level of finger counting from one meter. Indirect ophthalmoscopy and optical coherence tomography revealed a giant PFCL bubble located in the fovea. The retained PFCL was removed via therapeutic extrafoveal retinotomy inferotemporal to fovea on PFCL bubble and passive aspiration with a back flush flute cannula during air-fluid exchange following silicon oil removal via 23 gauge pars plana scleroretinotomy. His visual acuity in the left eye improved to 1/10. A retinal atrophy developed at the region of which retinotomy was created. The retained subfoveal PFCL. should be removed surgically.

Perfluorocarbon liquid (PFCL) is currently widely used in the surgical management of the retinal detachment. However, subretinal retention of PFCL has been reported in a frequency of 0.9-11.1% of the cases which PFCL was used [1,2]. Subfoveal PFCL can lead to decrease the central visual acuity significant with the permanent damage to retinal pigment epithelium (RPE) and photoreceptor cells [3-5]. Recent reports demonstrated various surgical and nonsurgical options for the management of subfoveal PFCL [2,6].

The aim of this report is to present the outcome of the surgical removal of subfoveal giant PFCL and, to review the literature about the management of subfoveal PFCL retention.

A 65 years old man had undergone phacoemulsification without intraocular lens (IOL) implantation, and anterior chamber IOL implantation with anterior vitrectomy on separate dates about one year ago for his left eye, based on his medical records. A 23 gauge pars plana vitrectomy (PPV) and silicone oil implantation with the extraction of an anterior chamber IOL for macula-off superior retinal detachment had been performed about three months ago. Recently, the case admitted to our clinic with visual loss in the left eye for a month. His visual acuity in the left eye was at the level of finger counting from one meter. His intraocular pressures were 13 mmHg in both eyes. He was normal ocular motility in both eyes. The anterior segment examination with slit-lamp biomicroscopy of the left eye showed aphakia and Ando’s inferior iridectomy at the 6-clock hour. Indirect ophthalmoscopy revealed single round cyst-like bubble in a size of 2/3 of the optic disc in the fovea (Figure 1). 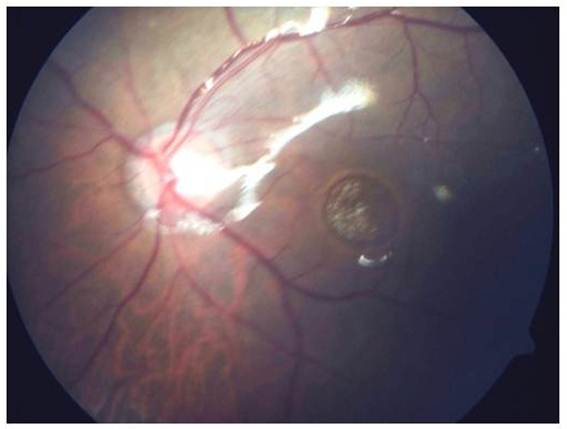 Spectral domain OCT showed a single giant cystoid lesion with dome-shaped and regular boundaries in the fovea (Figure 2A, B). 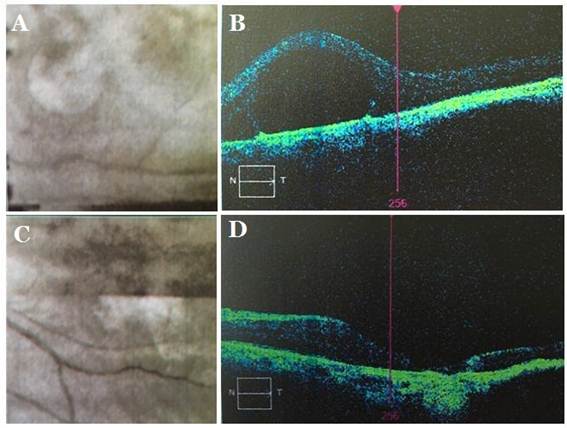 Figure 2. The images of OCT fundus and scan of the left eye at the presentation (A, C) and after surgery (B, D).

According to OCT findings of the lesion, the subfoveal PFCL retention was diagnosed. The retained PFCL was removed via therapeutic extrafoveal retinotomy inferotemporal to fovea on the PFCL bubble and passive aspiration with a back flush flute cannula during air-fluid exchange following silicon oil removal with the approach of 23-gauge pars plana scleroretinotomy under general anesthesia. His visual acuity in the left eye improved to 1/10. At post-operative fundus examination, no PFCL bubble was visible. A retinal atrophy developed at the region of the retinotomy in the 2nd week after the last operation (Figure 2C, D).

Perfluorocarbon liquid (PFCL) is currently widely used in the surgical management of complex retinal detachments. Subretinal retention and migration of PFCL may occur and cause the retinal structural and functional changes. It has been reported that these complications of PFCL occurred in the rate of 0.9-11.1% of the cases [1-5]. However, subretinal retention of perfluoro-n-octane occurs more common in about five times than that of perfluoroperhydrophenanthrene, because of different vaporization pressures, indexes of refraction, and viscosities of these PFCLs [6]. The large retinotomy may be a risk factor for subretinal PFCL retention [7]. Subretinal retained PFCL can cause significant damage to retinal pigment epithelium (RPE) and photoreceptor cells via the direct toxic affect or an inflammatory response including the macrophages phagocyted PFCL [8,9]. Clinically, it was demonstrated that retained subretinal PFCL can cause RPE atrophy [7-9]. However, it has not been known clearly how long subfoveal PFCL can cause irreversible damage to photoreceptor or RPE cells. Additionally, subretinal retention of PFCL may cause retinal degeneration and gravity deformation [7-9].

If it is in the subfoveal location, it can cause irreversible visual loss. As the removal of the retained subretinal PFCL may cause some complications, it has been recommended by most authors that subretinal PFCL should be removed if it is in the subfoveal location. Because subfoveal PFCL not only causes the central visual loss but also prevents anatomical reattachment of the retina in the fovea [10-13].

In recent reports, various surgical and nonsurgical management methods were reported. Surgical removal of subfoveal PFCL includes active or passive aspiration with 36-40 gauge flexible cannulas through a single therapeutic retinotomy adjacent to subfoveal PFCL bubble in three-port pars plana approach [10-13]. In this method, the tip of the cannula is inserted into the PFCL bubble, and then it is removed with active aspiration. However, the aspiration of the retained subretinal PFCL with active suction can result in some complications such as damage to RPE, photoreceptors and retinal nerve fibers, subretinal hemorrhage, and fibrosis. In our case, we decided to remove the PFCL bubble surgically. Consequently, although a retinal atrophy partially involving foveola in the retinotomy site developed, visual acuity improved.

In addition to, removal of PFCL with active aspiration though a therapeutic retinotomy, displacement in the subretinal space of retained subfoveal PFCL with therapeutic retinal detachment and head positioning have been described as another surgical method [14].

To avoid the complications of surgery, some authors have recommended nonsurgical methods for the management of subfoveal PFCL retention. In recent reports, it has been reported that a technique of PFCL displacement with postoperative head positioning provided the successful outcome [15]. In a recent publication, Oellers et al reported the spontaneous resolution of subfoveal PFCL in three weeks postoperatively with subsequent anatomic and visual improvement [16].

In conclusion, although the subfoveal retention of PFCL is a rare complication of vitreoretinal surgery, it causes irreversible visual loss. Thus, a subretinal retained PFCL located in the fovea should be removed. The surgical removal of the subretinal retained giant/large PFCL bubble/droplet in the foveal location may provide anatomical and visual satisfactory outcomes.

No financial support was received for this study.