Blindness and visual impairment are representing severe public health and socio economic problems in the world [1]. Visual impairment and its overall effects on development of children including physical and social development, is associated with early correction of refractive error and compliance of spectacles [2].

It was estimated worldwide that 19 million children are visually impaired [3]. Out of these, 12 million children are visually impaired due to uncorrected refractive errors and 1.4 million are irreversibly blind for their whole lives and require rehabilitative services for a full physical and social development [4]. Refractive error is a leading cause of preventable visual impairment globally and Pakistan is not an exception. Vision impairing refractive error affects a significant proportion of the world’s population including children.

Refractive error can be defined as the state when eye fails to focus parallel light (distant objects) on the retina [5]. "Spectacles is a visual aid that consist oflenses andframe, with sides extending towards the ears" [6]. Productivity and functionality can be improved by timely correction of refractive error, improving participation in activities of daily life and visual functioning [7]. So the children who wear spectacles can be prevented from amblyopia, visual impairment. Vision School screening programs are an effective way of early diagnosis of diseases and their timely intervention in children. The screening programs throughout the world are trying to improve spectacle coverage by providing children with spectacles [8]. In respect to this study, by compliance of spectacles we mean those children who are wearing spectacles prescribed by qualified optometrists and doctors during school screening projects, in clinics or hospital and those who have refractive error but not wearing spectacles we consider them in noncompliance

This study was conducted to study the compliance of spectacles wear among school going children and to determine the reasons/factors associated with non compliance.

The study design was cross sectional.The population for study was the students in school who had undergone screening by team of Al-Shifa Trust and prescriptions are given to them in July 2014 to Dec 2014 in District Rawalpindi Punjab, Pakistan. Study was conducted between August 2015 to December 2015. All students of age 11-16 years, who were prescribed glasses by screening team of Al-Shifa and both gender were included. Students with age >16 years, with other anomalies of eye and with media opacities were excluded. Sample size calculated for this study was 384, rounded to 441 with 15% inflation rate. It was a cross sectional study so anticipated population was considered 1 million and hypothesized frequency of outcome variable was considered to be 50%, calculated by open Epi software, version 3 designed for sample size calculation using 95% confidence interval and 5% significance level. The study was conducted in District Rawalpindi the district was selected because the screening program of Al-Shifa was running only in Rawalpindi. The screening team of AL-Shifa had gone a visit in schools and prescribes spectacles to the students with refractive error. A follow up visit was conducted to assess spectacle wear compliance after 8-12 months. During follow up visit the children who had been previously prescribed spectacles undergone clinical examination, assessed for compliance of spectacles and were interviewed through structured questionnaire. The list of schools was obtained from Al-Shifa centre of community ophthalmology(ACCO). Total 8 Schools were randomly selected from list of 20 Schools using lottery method. Data was analyzed using SPSS version 18.0 software. Descriptive statistics (percentages, mean, SD) was used to describe the data. Chi square test was applied to check any statistical association between independent and dependent variables. Logistic regression analysis was performed to assess the association between independent variables and outcome variable. Odds ratios (OR) and 95% confidence interval were calculated. 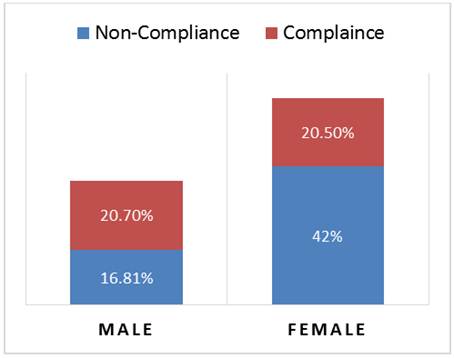 In this section the children were asked an open ended question to identify reasons for noncompliance. The major reason was found to be that children don’t like spectacles 71(28%). About 48(19%) children mentioned that they were not wearing spectacles due to peer pressure. About 42(16%) had given the response that their spectacles were broken and they didn’t purchase it again. Some of them 39(15%) also respond that they were not wearing because their parents can’t afford it and rest were mentioned that they forgot at home 35(13%) and 25(9%) had lost it. 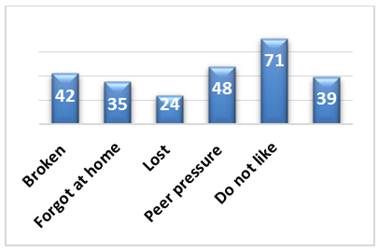 We found overall compliance of spectacles wear among school going children was 41% in district Rawalpindi which is greater than the compliance of spectacles in Saudi Arabia 33.2% [9]. In our study the children in elder age group (14-16 years) were found to be more compliant 132(30%) than younger age group. The older children better understand the desirability of compliance and their visual needs for higher studies improved the compliance among this age group [10]. The children with myopic refractive error were found to be more compliant 77(17.5%) than those with hypermetropia 21(4.8%), astigmatism 45(10.2%) and compound 38(8.6%).Evidence exist that the children with high myopic refractive error were more compliant than those with low error as it affects their studies group [11]. In our study the children who were wearing spectacles their academic performance had been improved as compared to those who were not wearing spectacles. A study conducted in America had shown that academic performance was found to be better in students with spectacle compliance than others [12]. In our study father education was found to be a very important contributing factor towards compliance of spectacles among school going children. The children whom fathers were more educated had more awareness related to importance of spectacle wear among children. A study conducted in rural India also shown that children with low father’s education were more likely to be non-compliant for spectacle wear than others. The father’s education had remarkable effect on compliance of children than mother education [13]. In our study the children whom father occupation was business, they were found to be more compliant 40(9.1%) than others ARMY 30(6.8%), Banker 25(5.7%), teacher 21(4.8%), Govt. servant 31(7.0%),Engr workshop 5(1.1%), tailor 2(0.5%) & painter 2(0.5%). A study in Chitrakoot India reported that poor socioeconomic status of parents was related with noncompliance/poor compliance of spectacles among school going children [2]. The most common reason reported by participants was that they "don’t like glasses" 71(28%). The children don’t like glasses because it goes with their cosmetic appearance. Evidence exit, the childrenthat don’t like spectacles and conscious about cosmetic appearance were 6% boys and 2% girls [14]. In our study none of the participants reported parent’s disapproval but evidence exist that in Saudi Arabia parent’s disapproval was found to be an important reason for noncompliance of spectacles [4].The study strength, data was directly collected from students, parents and teacher as it was very difficult to approach schools like army public schools (APS) after the incident of terrorist attack on 16-12-2014 in APS Peshawar. The screening program had mostly screenedout private schools in its initial stage. This creates a kind of bias in our study because we cannot generalize our finding.This research was based on screening program Al-Shifa, most of the selected schools were private so we might be overestimating the compliance. Although Al-Shifa is doing a great job in screening but we faced many problems because the data on school screening was not well maintained.

The compliance rate was found to be 41%. The study showed that compliance of spectacles is strongly associated with father’s education. The reasons of noncompliance include broken, forgot at home, lost, peer pressure, don’t like spectacles and poor financial conditions. Counseling of parents, teachers and providing students with spectacles free of cost will be an effective step towards improvement of compliance.