Medicinal herbs are significant source of synthetic and herbal drugs. In the commercial market, medicinal herbs are used as raw drugs, extracts or tinctures. Isolated active constituents are used for applied research. For the last few decades, phytochemistry (study of plants) has been making rapid progress and herbal products are becoming popular [1].

Nigella sativa is considered to be one of the greatest healing herbs of all times. This herb has been used for millenniums to strengthen the immune system, cleanse the body, purify the blood, protect against irritants and diseases and support healthy long span of life. N. sativa is an annual herbaceous plant, which is believed to be aboriginal to the Mediterranean region but has been cultivated in other parts of the world including Saudi Arabia, northern Africa and parts of Asia [2]. Black seeds have been used as herbal medicine by various cultures and civilizations to treat and prevent a number of diseases including fever, common cold, headache, asthma, rheumatic diseases, and microbial infections and to expel worms from the intestines and as useful for treating "Sartan" (cancer). In addition, it is used for flavoring bread and pickles [3].

N. sativa seeds were purchased from local market of Peshawar city. The plant material was identified by Prof. Dr. Abdur Rashid, Department of Botany, University of Peshawar. A voucher Specimen was deposited in the herbarium of the said department.

The crude extract and its different fractions were processed to phytochemical tests to recognize bioactive secondary metabolites by using standard methods [4-10].

Alkaloids: 0.5ml of each of the fraction was warmed with 2% H2SO4 for two minutes. The reaction mixtures were cooled and filtered and added a few drops of Dragendroff’s reagent to each filterate. Orange red precipitate indicates the presence of alkaloids moiety.

Tannins: 1ml of each extract was mixed with water and heated on water bath and filtered. A few drops of ferric chloride were added to each of the filterate. A dark green solution indicates the presence of tannins.

Anthraquinones: 0.5 ml of each extract was boiled with 10% HCl for few minutes on water bath. The reaction mixtures were cooled and filtered. Equal volume of CHCl3 was added to each filterate. Few drops of 10% ammonia were added to each mixture and heated. Rose pink color formation signifies the presence of anthraquinones.

Glycosides: Each extract was hydrolyzed with HCl and neutralized with NaOH solution. A few drops of Fehling’s solution A and B were added to each mixture. Formation of red precipitate signifies the presence of glycosides.

Reducing Sugars: Each extract was shaken with distilled water and filtered. The filterates were boiled with few drops of Fehling’s solution A and B for few minutes. An orange red precipitates signifies the presence of reducing sugars.

Saponins: 1 ml of each extract was shaken with 3 ml of distilled water and heated to boiling. Frothing (appearance of creamy miss of small bubbles) signifies the presence of saponins.

Flavonoids: 0.2 ml of each extract was dissolved in diluted NaOH and few drops of HCl were added. A yellow solution that turns colorless implies the presence of flavonoids.

Phlobatanins: 0.5 ml of each extract was dissolved in distilled water and filtered. The filterate was boiled with 2% HCl solution. Red precipitate implies the presence of phlobatanins.

Steroids: To 1 ml of each extract, few drops of acetic acid were added. It was gently warmed and then cooled and then a drop of H2SO4 was added. The color changes to green which shows the presence of steroids.

Terpenoids: 0.2 ml of each extract was mixed with 2 ml of chloroform and concentrated H2SO4 (3 ml) was carefully added to form a layer. The formation of a reddish brown coloration at the interface signifies positive results for the presence of terpenoids.

Test for Caumarin: Exact 3 ml of 10% NaOH was added to 2ml of aqueous extract. Formation of yellow color indicates the presence of caumarin.

Test for Emodins: Exact 2ml of NH4OH and 3ml of benzene was added to extract. Appearance of red color indicates the presence of emodins.

Test for Carbohydrates: Few drops of Molisch’s reagent were added to each of the portion dissolved in distilled water; this was then followed by addition of 1 ml of conc. H2SO4 by the side of the test tube. The mixture was then allowed to stand for two minutes and then diluted with 5 ml of distilled water. Formation of a red or dull violet color at the interphase of the two layers was a positive test.

One strain of Gram-negative bacteria (Klebsiella pneumonia) and two strains of Gram-positive bacteria (Staphylococcus aureus and Staphylococcus epidermidis) were used for this activity. These organisms were kept in Muller-Hinton agar in the refrigerator at 4°C.

The tests for responsiveness were done using modified agar well diffusion method to tryout the antibacterial activity of various fractions. To assess antibacterial activity, standard protocol was used [11]. The Muller Hinton agar was the medium. The cultures were taken in triplicates at cultivation temperature of 37°C for 1 to 3 days. The broth culture of the test organism was placed in a sterilized Petri-dish to which 20 ml of the sterilized molten MHA was added. Wells were bored into the medium using 0.2 ml of the extracts. The standard antimicrobial agent used was streptomycin (2mg/ml). Inoculation was done for 1 h to make possible the diffusion of the antimicrobial agent into the medium. The inoculation plates were incubated at 37°C for 24 h and the diameter of the zone of inhibition of bacterial growth were measured in the plate in millimeters.

DPPH radical scavenging assay was used to perform antioxidant activity by using standard protocol [12, 13]. The oxidation abilities of the mentioned fractions were measured from the bleaching of the 2, 2-diphenyl-1-picrylhydrazyl (DPPH), purple-colored solution in methanol. Concisely, a 1mM solution in methanol was prepared by dissolving DPPH in it and 1ml of this solution was mixed with 3ml of each fraction solutions in methanol (containing 10-100µg) and blank (without sample). Each solution was kept in dark for 30 min, and then absorbance was measured at 517 nm. Decline in the DPPH solution absorbance confirms an increase in the DPPH radical scavenging activity. As percent radical scavenging activities (%RSA) by using DPPH, the scavenging of free radicals was calculated as:

The most used method for screening antifungal agents is the Agar tube dilution method [14]. 22 mg of each extract was taken in clean and sterile vials. These weighed samples were then dissolved in 1ml sterile DMSO. They were then properly homogenized. The growth media used for fungus in this bioassay was SDA (Sabourad dextrose agar). 9.75 g of the powdered SDA was taken and was dissolved in 150 ml distilled water. It was homogenized. The media and micropipette tips were sterilized by Autoclave. The tubes were allowed to cool at 50°C after autoclaving and test samples were loaded in to the non-solidified SDA in biological safety cabinet. Each sample was loaded in test tubes for the given fungal cultures and for negative control. Tubes were arranged with their corresponding samples in slanting positions on the table at room temperature for 24 hours to form slants. Next day slants were checked for their sterility and each sample tube was inoculated with 4mm diameter of fungus removed from seven day old cultures of fungus. The tubes were incubated in fungal incubators at 27°C-29°C for 3-7 days. The following formula is used to calculate inhibition of fungal growth [15]

Phytochemical analysis of crude extract and subsequent solvent fractions are given in Table 1, antimicrobial efficiency are listed in Table 2, 3 while antioxidant activity is given in Figure 1. 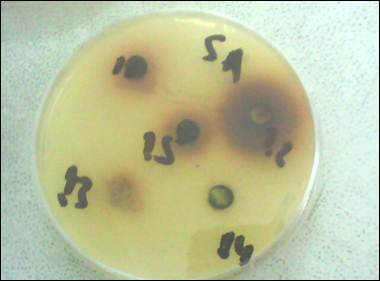 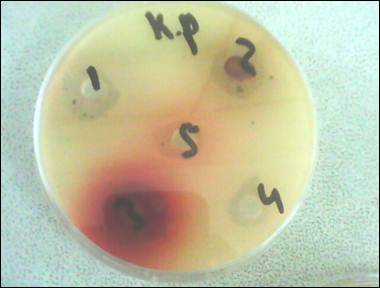 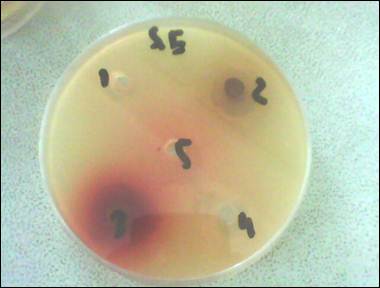 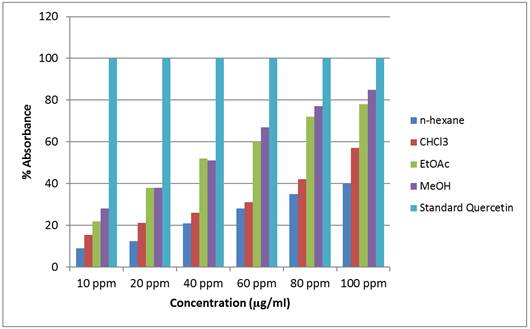 The four fractions of the plant material were tested against three selective strains of fungi; Aspergillus flavus (A. F) (ATCC 32611), Aspergillus niger (A. N) (ATCC 16404) and Alternaria solani (A. S) (ATCC 11078). All the four fractions showed excellent activity against fungal strains. Amongst all, MeOH fraction showed good antifungal activity against A. N and A. S. n- Hexane showed no activity while other fractions showed moderate activity. Miconazole was used as standard (Table 3). The crude extract/fractions of title plant were evaluated at accumulative concentrations i.e. 10, 20, 40, 60, 80 and 100 µg/ml for anti-radical effect. The methanol, ethyl acetate, chloroform showed significant antioxidant activity against DPPH (Figure 1). Antioxidant compounds in food play an important role in health protection against various diseases like cancer and heart diseases. Fruits, vegetables are the primary source of naturally occurring antioxidants [16].

From the reported work on N. sativa, it can be concluded that the seeds contain various secondary metabolites that can be beneficial in various aspects. The best property of the seeds is its very good antioxidant activity. They can be used as antibacterial and antifungal agents.