2Department of Electrical and Electronic Engineering,Shahjalal University of Science and Technology, Sylhet, Bangladesh

Abstract: In this study,the global solar radiation over the southern coastal region of Bangladesh is estimated from the duration of relative sunshine hours. Five models are considered to estimate the solar irradiance. These models are modified form of classical Angstrom – Prescott regression equation. A quadratic logarithmic model, relating the relative solar radiation and the relative sunshine hours is proposed for southern coastal region of Bangladesh. NASA Surface Meteorology and Solar Energy (SSE)have record of solar radiation data all over the world, measured from satellite. As Bangladesh Meteorological Department or any other organization has no record of measured solar radiation data for the considered locations, the estimated solar irradiance from the proposed regression model is compared with the data recorded by NASA SSE. Also t – statistics is applied to the estimated results to determine whether or not they are statistically significant at a particular confidence level.

The reliability of electric power encourages hybridization of two or more renewable energy systems because of its intermittent nature.Solar-wind hybrid system is an universal one. Bangladesh Power Development Board (BPDB) has launched 7.5 MW off-grid solar-wind hybrid systems in Hatiya Island, Noakhali. BPDB has planned to install 1 MW off-grid solar-diesel based hybrid plant in Kutubdia Island and a 500 kW photovoltaic plant at Sandwip. 8 MW grid-connected and 2 kW off-grid photovoltaic plants are ongoing projects at Rangamati and Noakhali, respectively.BPDB has also lined up installation of MW range wind power stationatCox’s Bazar [1]

According to World Meteorological Organization(WMO) the sunshine duration is defined as the period during which the direct solar irradiance exceed a threshold value of 120 W/m2-day or 2.88 KWh/m2-day [12]. Solar radiation of a certain period is proportional to sunshine duration. Different models describing solar radiation and sunshine hours are paraphrased here.

The relation between solar radiation and sunshine duration was first proposed by Angstrom in 1924.The original Angstrom equation is given by [13]

= actual sunshine duration in a day in hours, and

A basic difficulty in this model is to determine

, clear sky radiation. To avoid this difficulty a modified model was presented by Prescott [14] in 1940.

Popularly known Angstrom-Prescott model is given by

are same as equation (1) and

the latitude in degree

the solar declination in degree

the sunset hour angle in degree.

The solar declination is calculated according to the following equation:

The sunset hour angle is calculated using the following equation:

for the month is calculated as follows:

the number of days in the month

The maximum possible sunshine duration N in hours for a horizontal surface is given by:

Newland et el [16] separated global solar irradiance into its components for the southern coastal region Macau, China. He showed that a non linear relation between (n/N) and (H/Ho) gives better prediction of global irradiance. His proposed relation is

Ampratwum et el [17] studied five stations in Oman and proposed a logarithmic relationship between (n/N) and (H/Ho). His proposed model is

In this paper, another non-linear model is proposed. The proposed model relating (H/Ho) and (n/N) is

Stone [18] concluded that the t-statistics test might be taken as a statistical indicator for the evaluation and comparison of solar models. The smaller the value of t, the better is the model’s performance. If the calculated value of t-stat is less than a critical value tc, then it can be concluded that estimation is significant to (n-1) degree of freedom at the (1- α) confidence level. Stone recommend that t-statistics may be used in conjunction with Mean Bias Error (MBE), Root Mean Square Error (RMSE) and Mean Absolute Percentage Error (MAPE) to access the relative model performance.The mostly used statistical indicator MBE, RMSE and MAPE are defined as

where,Hic , and Him are the estimated and measured monthly average global solar radiation for the ith month. The average of the deviations E (= Hic – Him) is MBE and gives information about the long- term performance of the correlations. MAPE is a measure of the goodness of each correlation, while RMSE measures the short-term prediction quality of the correlations [19].

As shown in Table 1, the five study regions are geographically close to one another andthey are mainly southern coastal belt of Bangladesh. Therefore, a general relation between solar radiation and sunshine hours can be developed for these places.

The regression coefficients of five models for the considered locations are shown in Table 4.The physical significance of the regression coefficients `a' and `b' is that `a' is a measure of the overall atmospheric transmission for total cloud conditions (n/N=0), and is a function of the type and the thickness of the cloud cover, while `b' and `c' are the rate of increase of (H/Ho) with (n/N). The sum (a+b) denotes the overall atmospheric transmission under clear sky conditions.

Statistical evaluations of five models are summarized inTable 5. It is seen that the regional correlation has minimum error in all models. MBE, RMSE and MAPE are lowest in "Akinoglu and Ecevit" model for all locations. Also value of r is highest in "Akinoglu and Ecevit"-model for all locations indicate that this model best fit the sunshine hour data with solar radiation. The value of t-stat lies far below the critical value tc(at α=0.01) indicating correlation models performance is statistically significant at 99% level of significance.

The estimated annual radiations on considered locations along with measured radiation are shown in Table 6.

A general relation relating relative sunshine hours (n/N) and relative solar radiation (H/Ho) has been developed according to proposed model for these southern coastal regions. To determine the coefficients of general relation, least square regression has been used combining all the data of five locations. The proposed general correlation equation for southern coastal region is

To validate the proposed general correlation, the estimated solar radiation for considered five locations along with measured radiation has been shown in figure 1 to 5. From those figures it is evident that the predicted radiations according to equation (16) are sufficiently close to that measured by NASA SSE. 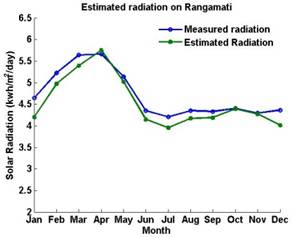 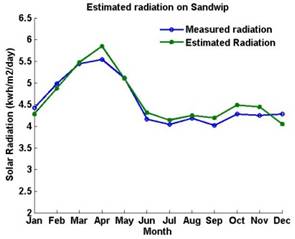 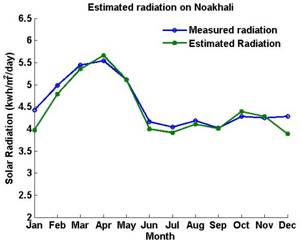 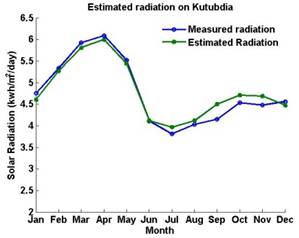 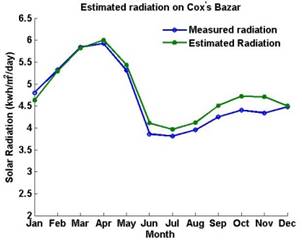 The accuracy of the estimated radiation according to equation (16)has also been determined by statistical means. The MBE, RMSE, MAPE and t-stat for estimated radiation according to proposed equation has been shown in Table 7. It is found fromTable 7 that the values of t-stat are far below from tc at 99% confidence level. This indicates that the general correlation is statistically significant. 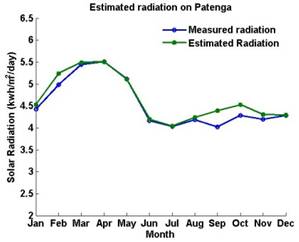 In this analysis, five models relating global solar radiation and relative sunshine hours have been considered for predicting the global solar radiation pattern over the southern coastal region of Bangladesh. The level of performance of five models has been studied by statistical measures. The t-statistics have been applied to test the significance of applicability of these models.

A nonlinear logarithmic model has been proposed for estimating the global solar radiation from sunshine hour data. Statistical tests show that proposed model gives fairly good result and can be applied to southern coastal areas of Bangladesh. Few articles correlate the global solar radiation with sunshine ours over Bangladesh. But developing a nonlinear model for estimating solar radiation over southern coastal region of Bangladesh is quiet new. This work emphasis on this region considering the potential of generating electricity from hybrid solar-wind based renewable energy system. The accuracy of prediction can be further developed by considering the fog density, cloud cover and atmospheric scattering effect.