Abstract: The performance of the Solar Tower Receiver (STR) affects significantly the efficiency of the entire solar power generation system and minimizing the heat loss of the STR plays a dominant role in increasing its performance. Unlike the other thermal losses the convective heat loss in

has direct relation with wind conditions. In this study a Simulation tool ANSYS® FLUENT® was used to determine the convection heat loss in both cavity and external

Concentrated Solar Power technology implementation is growing fast. In 2013, (2.136)GW are operating, (2.447)GW under construction and (10.135)GW are announced mainly in the USA followed by Spain and China and about (17)GW of CPS projects are under development worldwide [1]. Central Receiver Systems (CRS) arevery promising from the point of view of cost produced electricity [2].The CRS is composed of the following main components: the heliostats, the receiver, the power block and thermal storage and balance of plant components allow high temperatures which lead to high efficiency of the power conversion system [3], easy integration in fossil plants for hybrid operation in a wide variety of options. It has the potential for generating electricity with high annual capacity factors from (0.4) to (0.8) through the use of thermal storage [3], and great potential for cost reduction and efficiency improvements [4]. Table (1) shows some characteristics of CRS.

, Spain, and France. However, the first commercial Concentrating Solar Thermal Power Plants using large heliostat field and a solar receiver placed on the top of a tower are PS10, PS20, and

threshold in 2013 and 2014. In the case of power towers, incident sunrays are tracked by large mirrored collectors (heliostats) which concentrate the energy flux towards radiative /convective heat exchangers, called solar receivers, where energy is transferred to a working thermal fluid. After energy collection by this solar subsystem comprised of optical concentrator, and solar receiver, the conversion of thermal energy to electricity has many similarities with the one from fossil-fueled thermal power plants [3].

There are different types of receivers that can be classified into four groups depending on their functionality and geometric configuration. The four groups are external receivers, volumetric receivers, the cavity receivers and the particle receivers [1]. The present study will focus only on external (outer surface) and cavity type receivers.

The essential feature of the receiver in power tower plants is to absorb the maximum amount of the concentrated solar irradiance and transfer it to the working fluid or materials heat with minimum losses. In external type, the receiver is exposed to the environment and receives the solar irradiation from the heliostats. Being exposed to the environment, the performance of the external receivers can be affected by the environment conditions such as wind speed and ambient temperature. The radiation and convection heat transfer from the hot surface temperature of the receiver to the environment will reduce its efficiency. The cavity receiver is not exposed to the environment to the same extent as external type. However, still the heat loss in cavity receiver remains an issue to be solved and quantified. To date, some publications concerning the heat loss of the STR are available. Clausing (1981) presented an analytical model which enables the estimation of convective losses from cavity receivers and his model indicated that the influence of the wind on the convective loss at normal operating conditions is minimal [8]. Stine and McDonaled (1989) stated that the convective heat loss depends on the air temperature within the cavity, the inclination of the cavity and external wind conditions [9]. Leibfried and Ortiohann (1995) reported that the radiation loss is dependent on the cavity wall temperature, the shape factors and emissivity/absorptivity of the receiver walls, while conduction is dependent on the receiver temperature and the insulation material [10]. Sendhil Kumara (2007) investigated the approximate estimation of the natural convection heat loss from actual geometry of a cavity receiver by varying the inclinations of the receiver from 0° to 90° and also investigated the effect of operating temperature [11]. Prakash M. (2008) studied the convective and radiative heat losses of a cavity receiver taking in consideration different wind speed and direction, input temperature and receiver inclination angel [12]. Shuang and Xiao (2010) obtained that the conduction and radiation in cavity receivers can readily be determined analytically, on the other hand, the determination of convection heat loss is rather difficult due to the complexity of the temperature and velocity fields in and around the cavity and usually rely on semi-empirical models [7]. Qiang and Zhifen (2011)

shows the tilt angle in a cavity receiver 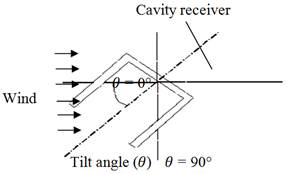 The objective of this study is to investigate the convection heat loss characteristics in external and cavity receivers with a fixed tilt angle of (90°) and varying wind speed, using Computational Fluid Dynamics

are mainly consists of three losses as following: conduction loss 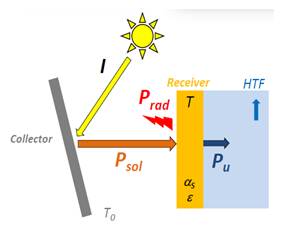 is caused by infrared radiation, which emits from the receiver walls to the environment. The radiative loss is dependent on wall temperature, the shape factors and emissivity/absorptivity of the receiver walls and independent of the inclination [9]. The figure (2) shows an energy balance of a solar absorber.

The total infrared energy can be calculated by the Stefan-Boltzmann law as:

The solar power to the receiver

can be calculated by applying an energy balance on the solar absorber, as following:

is the power transferred to the heat transfer medium.

is the reflected power which happens when the incident rays of visible light that come from the heliostats are reflected at the wall of the receiver.

The energy efficiency of the system can be calculated

will be illustrated more in details later in this paper.

in the case of the external receiver can be calculated as described above in equation (6):

in the case of the cavity receiver can be calculated using the following equation [15]:

The aperture area of the cavity receiver

in the model is equal to

of the cavity can be derived using the following equation [15]: 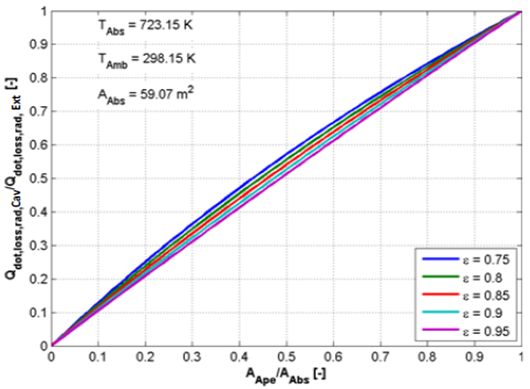 Fig. 3. Ratio of radiative losses for external and cavity type receivers versus the ratio of aperture to absorber area.

The convective heat loss is the only heat loss in the receiver that has direct relation with the wind conditions. Since there is an existing empirical formula to calculate the heat loss in a turbulent flow over a flat plate as shown in equations below [15], it appears reason to do the simulation for the receiver as a flat plate with the same hot surface area, thickness, and insulation material and to compare the results with the empirical results. This allows validating the simulation model.

for a flat plate of the length

is calculated by equation

for a flat plate of the length

is calculated by equation

The convection heat transfer coefficient can be calculated by:

The physical model of the receivers is shown in the Fig. 4.There are few assumptions made in all simulation cases as following:

1.   Hot surface area of all receivers is

2.   Thickness of the flat plate and cavity receivers is

5.   Temperature of hot surface is

6.   Height of the receiver is

All receivers are facing the wind with a tilt angle of

. The area of the hot surfaces in all receivers is assumed to be equal and the dimensions are as following: in the flat plate (a) is (16 X 6.692)m as length and width respectively. In the cube receiver (b) the length of the inner cube is (3.3)m, the height is (3.65)m and the roof area is (3.3 X 3.3)m. In the cylindrical receiver (c) the outer diameter is (3.3)m and the height is (5.7)m. The imaginary wind tunnel used in the model is external type. Each one of the receivers will be centered in the tunnel in order to apply the boundary conditions such as temperature and wind speed. The cross section of the tunnel is (50 X 50)m with (50)m length.

Fig. 5(a, b). Show the velocity distributions in cavity and external receivers with the same wind speed of (10) m/s. It should be mentioned that the flow is from left to right. The cavity is supposed to be suspended from a cantilever type receiver. The impact of tower and cantilever on the flow field across the cavity is neglected. It is obvious that the wind speed along the hot surface inside the cavity is lower than in the wind speed around the hot surface of an external receiver. That is because of the air recirculation which reduces the heat transfer coefficient and as a result reduces the convection heat loss. 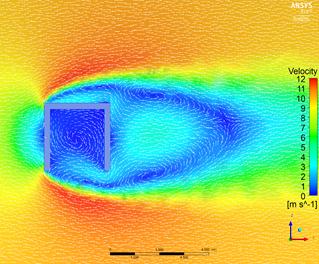 Fig. 5(a). Velocity distribution around and in the cavity receiver. 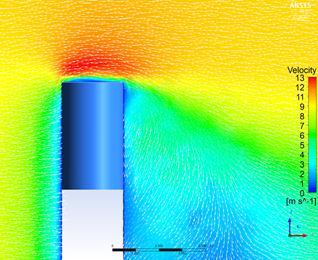 Fig. 5(b). Velocity distribution around the external receiver. 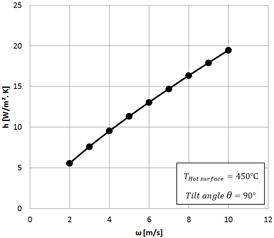 In order to examine the accuracy of the model, the result of the analytically calculated convective heat transfer coefficient was compared to the numerical result from the model (FLUENT®) with (450)

temperature of the hot surface, (90)

to (10)m/s. Based on Figure (7) there is a good agreement between the analytical and numerical results for the convective heat coefficient. 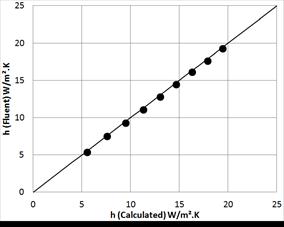 Fig. 7. Comparison between the analytical and numerical heat transfer coefficient for the Flat Plate receiver. 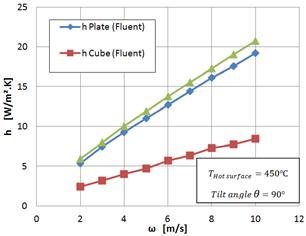 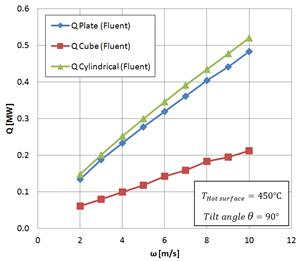 Fig. 9. The convective heat loss of all receivers at different wind speed.

Table 3. Shows the numerical result of the convective heat loss in all receivers.

is studied. The following conclusions can be drawn from study:

Furthermore, regardless of the wind speed and the tilt angle, the radiative heat loss in the cavity receiver is almost

less than the radiative heat loss in the external receiver for the same absorbed area.

The author wish to thank the institute for Energy Systems and Thermodynamics at Vienna Technical University(TU) I am also grateful to Professor. Markus Haider for the help provided in guiding the study.

: Hot surface area of the absorber (

: Optical efficiency of the receiver mirrors