Abstract: Energy crisis is a burning problem in the present scenario, as natural energy resources will be exhausted very soon, due to their rapid utilization. Solar cells have attracted the attention of researchers, as using these devices sunlight can be converted into electricity, which is freely available to us. DSSCs is one of the important and new type of solar cell, which deliver higher photoelectric conversion efficiency and low production cost by combining wide-band gap semiconductor electrode, dye as sensitizer, a counter electrode and redox electrolyte like iodide and triiodide ions between them. In the present work, a comparison is made for the efficiency of pure TiO2 and Cu/N co-doped TiO2 fabricated DSSCs. Pure TiO2 and Cu/N co-doped TiO2 were prepared through sol-gel process. These electrodes were also characterized by X-ray diffraction (XRD), scanning electron microscopy (SEM), fourier transform infrared (FTIR), transmission electron microscopy (TEM) and diffuse reflectance spectra (DRS) techniques to know about their morphology, band gap, particle size etc. The cell was prepared by coating of Cu/N‒TiO2 film on the conductive side of FTO glasses using Rhodamine B dye as sensitizer. Liquid electrolyte I‒/I3‒ redox couple and carbon (graphite) as counter electrode and light intensity 60 mWcm‒2 were used. The observations revealed that Cu/N doped electrode showed maximum conversion efficiency with an open circuit voltage (Voc) = 395.0 mV, short circuit current (isc) = 0.0339 mA, Vpp = 66.2 mV and ipp = 0.0209 mA with fill factor = 0.10 and the power conversion efficiency (η) = 0.0023%, which is higher than that of pure TiO2. The results showed that the doping of TiO2 by copper and nitrogen improved the efficiency of this solar cell 38 times more in compare to pure TiO2.

Various doping process have been used to enhance the activity of the semiconducting materials. A strong red shift in the visible light region has been observed by doped semiconductors as compared to undoped semiconductor [6]. Gu et al. reported that there is improvement in open-circuit voltage due to an upward shift of the Fermi level, but the oxygen defects generated retard the negative shift of the Fermi level [7]. Modification of TiO2 electrode by doping with metal and non-metal such as chromium, nickel, nitrogen, fluorine, and iodine doped TiO2was made by Xie et al. [8], Chou et al. [9] and Niu et al. [10]. A scattering layer and a nano-crystalline TiO2 electrode layer was fabricated using of Er3+ and Yb3+ co-doped TiO2, which showed better light scattering as well as lower transmittance property. The light scattering layer increased the efficiency of the DSSC to by 15.6% [11]. Sn/F dual doping with TiO2 was proposed by Duan et al. and the power conversion efficiency was about 8.89% which is higher than the undoped TiO2 [12].

In the present work, Cu/N-TiO2 was synthesized by sol-gel method and the electric output of the cell was examined using different parameters such as dye concentration, electrolyte concentration, light intensity, and surface area of semiconductor.

2.1. Preparation of Pure and Doped TiO2

Both pure and co-doped Cu/N─TiO2 were synthesized by using sol-gel method. It is schematically presented in Fig 1. 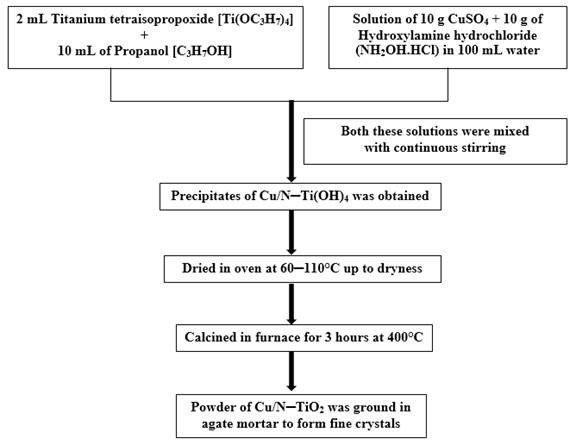 Fig. 1. Sol-gel method for the preparation of doped TiO2.

The same procedure was followed to prepare for undoped TiO2 with the only difference that in this case, no dopant was added.

The working electrode was prepared with Cu/N─TiO2 paste in acetic acid with few drops of dishwashing liquid as a surfactant. This paste was coated on the FTO glass (2.2 mm thickness, 7-9 ohm cm‒2, L 25 mm x W 25 mm, Shilpa Enterprises, Nagpur, India) by doctor blade method and left for a few minutes to let it dry. Then the glass was heated on a hot plate at 100°C for 45 min. Rhodamine B (1.0 x 10‒3 M) dye solution was prepared in ethanol and used as a sensitizer for the working electrode. The working electrode was dipped in dye solution for 15 min. and then rinsed with ethanol to remove extra dye. A counter electrode, coated with carbon (graphite) was clipped onto the top of the working electrode. 0.47 M iodine and 0.51 M potassium iodide was dissolved in 10 mL of ethylene glycol. This I‒/I­3‒ redox couple was used as liquid electrolyte.

The Fourier transform infrared (FTIR) spectrum of the synthesized samples were recorded in potassium bromide (KBr) pellets on a Perkin Elmer Spectrum RX1 spectrometer in the range from 4000 cm‒1 to 400 cm‒1 at a scanning rate of cm‒1/min. 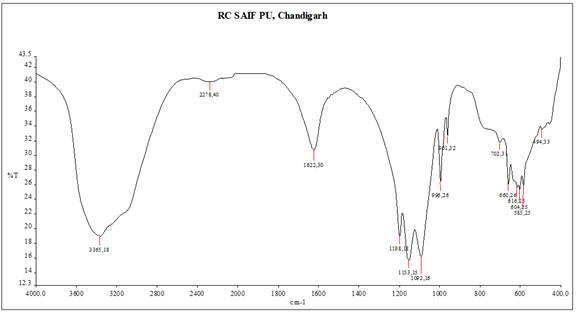 The X-ray diffraction of undoped TiO2 and Cu/N‒TiO2 samples are given in Fig. 3 and 4. The XRD patterns were recorded on Panlytical X’ pert Pro model X-ray diffraction using Cu Kα radiation as the X-ray source. The diffractograms were recorded in the 2θ range of 20-80°. The average crystalline size (D) of the undoped and Cu/N‒TiO2 material can be calculated from the Debye‒Scherrer formula:

Where D is the crystalline size (nm), λ is the wavelength of X-ray source (λ = 0.1540 nm for CuKα), β is the full width at half maximum intensity (FWHM‒in radian), and θ is the Bragg diffraction angle (°). It is also confirmed by the spectra that both; undoped and doped TiO2 are crystalline in nature. The average crystalline size of the pure TiO2 was 10.15 nm and Cu/N‒TiO2 was 86.62 nm. It was observed that after doping, the particle size increases. 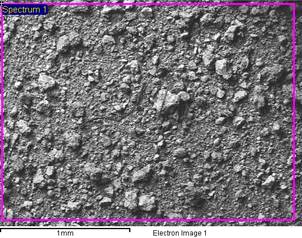 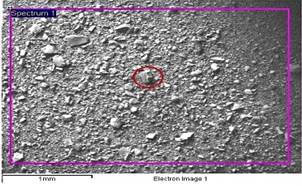 Fig. 5 and 6 show SEM images of Cu‒N doped TiO2 and undoped TiO2. SEM has been used to observe the morphological changes caused by loading of metal and non-metal on the surface of titania. It was observed that combination of the dopants Cu and N on TiO2 increases particle size. 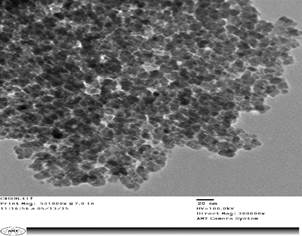 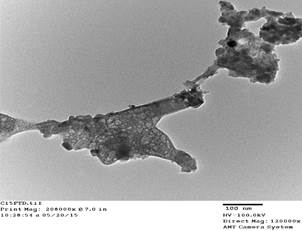 Fig. 7 and 8 show TEM images of pure and co-doped TiO2. Doping of TiO2 is clearly observed as evident from some lumps in co-doped TiO2, which is absent in undoped TiO2

The diffuse reflectance spectrum was scanned between 200-800 nm using UV Vis-3000 + spectrophotometer. It shows an intense absorption in the visible region at 739 nm. The band gap of co-doped TiO2 was calculated to be 1.67 eV, which is much less than undoped TiO2 (3.2 eV).

4.1. Variation of Potential with Time

Table 1. Variation of potential with time.

4.2. Variation of Current with Time

The effect of current with time on the electrical output of the cell was observed and results are summarized in Table 2. The current was also measured by digital multimeter (Mastech-M830bZ). The current of cell increases rapidly and in few minutes, it reaches its maximum, which is represented as imax. When irradiation time was increased further, current starts decreasing steadily and reaches almost a stable (constant value). This value is represented as ieq, when the source of light was removed, the current starts decreasing further.

Table 2. Variation of current with time.

The potential and current of the cell was observed using different concentrations (1.6 x 10‒3 M ‒ 0.3 x 10‒3 M) of dye. The results are given in Table 3. It was observed that as the concentration of dye was increased, the number of sensitizer molecules also increases but above 1.0 x 10‒3M, both the current as well as potential were found to decrease.

Table 4. Effect of I2 concentration.

4.5. Effect of Surface Area of Electrode

The performance of the cell may also be affected by the area of the semiconductor. Its effect was observed by changing the surface area of the electrode. The results are reported in Table 6. The potential and current were increased with increasing surface area, but above 1.0 × 1.0 cm2 area, both the current as well as potential were decreased.

4.7. i‒V Characteristics of the Cell

The open circuit voltage (Voc), keeping the circuit open and short circuit current (isc), keeping the circuit closed, were measured by a digital multimeter. The values of photocurrent and photopotential were observed with the help of a carbon pot (log 470 K) connected in the circuit by applying an external load. The results of variation of potential and current are represented in Table 8. and graphically in Fig. 8

Fig. 10. Photocurrent-voltage curve of the cell.

It is reported that doping of a semiconductor enhances its activity as it lowers its band gap. In the present investigation, two different DSSCs were fabricated using pure TiO2 and Cu/N─TiO2. These electrodes were prepared in the laboratory by sol-gel process. The FTIR analysis of these semiconductors confirmed O‒H, Ti‒O‒Ti, Cu‒O, Cu‒Ti, Ti‒N stretching and Cu‒N‒O bending. XRD and SEM analysis showed that the particle size of the semiconductor was increased on doping TiO2 by copper and nitrogen. DRS data also confirmed lowering of band gap of TiO2 when doped with copper and nitrogen. The observations confirmed that the photocatalytic performance of DSSC fabricated with Cu/N─TiO2 was found better than pure TiO2. It is also worth mentioning that the performance of Cu/N─TiO2 cell was enhanced 38 times as compared to pure TiO2.