Nwogu Chukwunonso. Comparative Evaluation of Biodiesel Produced by the Improved Biodiesel Plant with a Centrifuge for Ester-Glycerol Separation and a Single Washing and Drying Unit. International Journal of Sustainable and Green Energy. Vol. 5, No. 1, 2016, pp. 8-12. doi: 10.11648/j.ijrse.20160501.12

Abstract: This paper assessed the quality of biodiesel produced by the improved biodiesel plant. This was achieved by determining some physical properties of the biodiesel produced. The properties tested include: kinematic viscosity, specific gravity, flash point, fire point, cloud point and pour point, with their respective values determined as 5.260, 0.880, 124°C, 128°C, 4.5°C and -2°C. Comparison with ASTM D-6751, EN 14214 and Australian standards for biodiesel showed that the values obtained fall within acceptable limits. Furthermore, B5, B10, B20 and B30 blends of the biodiesel were prepared using direct blending method. The physical properties of the respective blends were also determined and the results showed that blending the biodiesel with petroleum based diesel improved its quality.

Diesel engine was developed in the 1890s by Rudolf Diesel out of a desire to improve upon inefficient, cumbersome and sometimes dangerous steam engines of the late 1800s. Since its development, the diesel engine has become the engine of choice for power, reliability, and high fuel economy, worldwide. Early experiments showed that pure vegetable oil could power early diesel engines for agriculture in remote areas of the world, where petroleum was not available at the time. The first public demonstration of vegetable oil based diesel fuel was at the 1900 World’s Fair, when the French government commissioned the Otto Company to build a diesel engine to run on peanut oil. Since then, many other vegetable oils have been intensively studied as raw materials for biodiesel production. These include: soybean oil, palm oil, castor oil, Parkia biglobbossa, Jatropha curcas, sunflower oil, coconut oil, rapeseed oil, safflower oil, ground nut oil, Neem oil and cotton seed oil [1-6]. Shortly after Dr. Diesel’s death in 1913 petroleum became widely available in a variety of forms, including the class of fuel we know today as "diesel fuel". With petroleum being available and cheap, the diesel engine design was changed to match the properties of petroleum diesel fuel. The result was an engine which was fuel efficient and very powerful. Due to the widespread availability and low cost of petroleum diesel fuel, vegetable oil-based fuels gained little attention, except in times of high oil prices and shortages until World War II and the oil crises of the 1970’s which saw brief interest in using vegetable oils to fuel diesel engines. Unfortunately, the newer diesel engine designs can no longer run on traditional vegetable oils, due to the much higher viscosity of vegetable oil compared to petroleum diesel fuel. The need to lower the viscosity of vegetable oils to a point where they could be burned properly in the diesel engine arose. Diesel fuel produced from vegetable oil is known as Biodiesel.

Methods used for reducing the viscosity of vegetable oils at the inception include pyrolysis and blending with solvents/emulsification of the fuel with water or alcohols, none of which provided a suitable solution. Hence, a Belgian inventor in 1937 proposed using transesterification to convert vegetable oils into fatty acid alkyl esters and use them as a diesel fuel replacement. The transesterification reaction is illustrated in Equation (1) below: 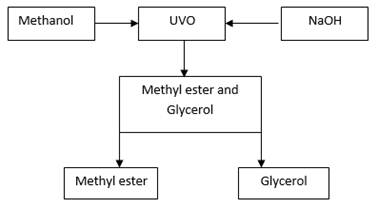 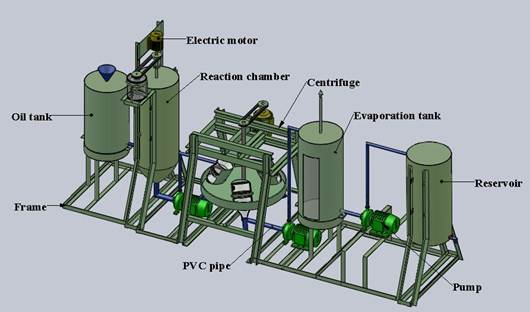 Over the years, various plants have been developed for producing biodiesel from vegetable oil. Some of these plants include: Pacific biodiesel plant, Big Island biodiesel plant, Yoshida Kosan Biodiesel Plant, Keystone Biodiesel Plant and many others. Although each of these plants have unique design and features, they all have the same principle of operation and are all faced with the same challenge of prolonged methyl/ethyl ester-glycerol separation time and relatively high energy consumption.

Based on this, an improved biodiesel Plant was developed which reduces the methyl/ethyl ester-glycerol separation time by introducing a centrifuge for the separation [9,10]. The improved plant also consumes less energy since the neutralization washing and drying of the ester was designed to take place in a single vessel. Figure 2 below shows the isometric view of the improved plant with the unit labelled.

Apart from the high price of petroleum based diesel, other advantages of biodiesel include:

i. Biodiesel is a clean fuel, emitting over 40% less Carbon dioxide into the atmosphere compared to fossil fuels [11].

ii. It does not contain any Sulphur and as such does not emit any dangerous oxides into the atmosphere when it burns.

iii. It has high combustion efficiency and high lubricity.

v. Biodiesel has a higher flash point of about 130°C compared to that of petroleum diesel which is about 64°C. Hence it is less liable to explode than petroleum diesel making them safer to handle.

Biodiesel can be used in pure form or blended with petroleum diesel at any level. Even a blend of 20% biodiesel and 80% petroleum diesel will significantly reduce carcinogenic emissions and gases that may contribute to global warming.

2.1. Procedures for Quality Assessment of the Biodiesel Produced

Some physical properties of the biodiesel produced by the Improved Biodiesel Plant [10] were tested in accordance with ASTM D6751, EN14214 Australia standards. The parameters tested include;

Water is always used as a reference substance in the determination of specific gravity of liquids. Specific gravity is defined as the ratio of the density of a substance to the density of water. The density of the biodiesel produced was determined at ambient temperature (28°C). A density bottle of mass 50ml was weighed on the analytical balance and the initial weight of the bottle was noted. The sample was put in the density bottle, the spillage was cleaned and dried, and the bottle was weighed on the analytical balance. The process was repeated twice and the average value was determined as the result. Density of the sample was then computed using equation (2) below.

Flash point of the biodiesel was determined using the setup apparatus comprising of an electric heater, beaker and thermometer. 80ml of the sample was introduced into a transparent Pyrex beaker placed on an electric heater. The beaker was fitted with the thermometer, clamped on a retort stand. Heat was applied gradually by turning the knob of the electric heater until the observed movement of the particles increased. A flame was constantly brought near the surface of the beaker until "a catch and disappearing" of flame on the surface of the hot liquid occurred. The temperature was noted as the flash point.

The biodiesel sample was further heated with continuous bringing of flame close to the vapor, the temperature at which the sample ignites without the flame disappearing from the surface of the sample was noted as the Fire Point.

Where k = Constant of the viscometer expressed in mm2/s2

t = Flow time in seconds of the liquid.

Hence, the sample was further cooled with an attempt to pour the samples at every increase in temperature. The sample was inspected at every one-minute interval by tilting it horizontally. The temperature at which a sample could not pour freely for five seconds was noted as the pour point.

The properties of biodiesel should fall within certain acceptable limits in order to function properly in the conventional diesel engine without causing any form of harm to the engine. In accordance with ASTM D-6751, EN 14214 and Australian biofuels standard, biodiesel produced by any means/method should have the following specifications (Table 1).

The results of these tests as shown in Table 2 indicate that the specific gravity, flash point and kinematic viscosity of the biodiesel produced by the Improved Biodiesel Plant falls within acceptable limits as specified by ASTM D 6751, EN 1421 and Australian standards for biodiesel. The fire point, cloud point and pour point of the produced biodiesel are 128°C, 4.5°C and -2°C respectively. Although the ASTM D 6751, EN 1421 and Australian standards did not report any precise values for these properties, there is a notable reduction in their respective values of 261°C, 7.2°C and 2.5°C before the transesterification reaction occurred. It is obvious from Table 2 that the physical properties of the biodiesel produced by the improved plant are similar to those of the petroleum based diesel, compared to the properties of the raw vegetable oil. This is illustrated in Table 2 below:

Table 2. Physical properties of the Biodiesel in comparison with ASTM D 6751, EN 1421 and Australian standards.

These properties can further be improved through blending of the biodiesel with petroleum based diesel in different ratios. Biodiesel blends were prepared by direct blending method which involved mixing of 5ml, 10ml, 20ml and 30ml of the biodiesel produced with 95ml, 90ml, 80ml and 70ml of petroleum diesel respectively in a transparent bottle to produce B5, B10, B20 and B30 biodiesel blends. The physical properties of the various blends were also determined and the results are as shown in Table 3.

The experimental results presented in Tables 2 and 3 do not show conformity with ASTM D 6751, EN 1421 and Australian standards for biodiesels alone, but also show conformity with results obtained by other authors from similar experiments performed on biodiesels produced by other plants/means. Some of such works include: Samuel et al [13] whose experiment gave Kinematic Viscosity, specific gravity and flash point values as 4.72, 0.879 and 139°C respectively and Alamu et al [1] with values of Kinematic Viscosity, specific gravity, flash point, cloud point and pour point as 4.839, 0.883, 167°C, 6°C and 2°C respectively.

The kinematic viscosity at 40°C, specific gravity at 28°C, flash point, fire point, cloud point and pour point of biodiesel produced by the improved biodiesel plant were determined experimentally as 5.260, 0.880, 124°C, 128°C, 4.5°C and -2°C respectively. These values were compared with the ASTM D6751, EN 14214 and Australian standards for biodiesels and found to fall within recommended range of values for the respective physical properties. The biodiesel was further blended with petroleum based diesel in different ratios to obtain B5, B10, B20 and B30 blends respectively. Physical properties of the various blends were also determined and the result showed that B30 blend has properties closest to those of the unblended biodiesel (B100) compared with the other blends while the B5 blend has properties closest to those of the petroleum based diesel.

Hence, it can be concluded that the improved biodiesel plant is capable of producing biodiesel which can be used in conventional diesel engines without a need for engine modification.