The Impact of Blade and Material Damping in Turbine Blades

Abstract: A method of determining equivalent viscous damping ratio for different rotational speeds and modes as a function of displacement or strain at a reference point in a blade is presented. This method can be adopted using a suitable finite element code, e.g., ANSYS or ABAQUS. The friction damping concept is widely used to reduce resonance stresses in turbomachines. A friction damper has been designed for high pressure turbine stage of a turbojet engine. The objective of this work is to find out effectiveness of the damper while minimizing resonant stresses for sixth and ninth engine order excitation of first flexure mode. The capability to assess damping in the blade from finite element codes avoids costly tests at the initial stages of design.

Blade fatigue failures are very common in turbomachinery. When the frequency of any of these harmonics coincide with any one of the natural frequencies, resonance occurs. The high stresses at resonance lead to fatigue problems. The only way by which the resonant stresses can be controlled is by dissipation of the vibratory energy. Thus damping becomes an important aspect of the blade design.

For a turbine blade the means by which this vibratory energy could be dissipated is by material damping, Coulomb damping at the interfaces, gas dynamic damping and possibly impactive damping. All these damping mechanisms are complex and non-linear in nature. Generally the aerodynamic damping is very low, and when there is no impact damping, the material and Coulomb damping between interfacial slipping surfaces are the main sources of dissipation of energy. A designer usually depends on past experience and test results to estimate the available damping in limiting the resonant stresses. Attempts have been made to quantify the material damping using Lazan’s damping law or by contact elements using 2D models [1]

The friction damping concept is widely applied in turbomachinery applications, especially at hot end parts, to reduce resonance stresses. A typical application of this in gas turbines. They are popularly called as "friction damper," "cottage-roof damper" or "under platform damper." This damper is loaded by centrifugal force against the underside of the platforms of two adjacent blades. The main design criterion for such devices is to determine the optimum damper configuration or the damper mass or both in order to reduce the dynamic stresses to maximum possible extent.

For example, if the damper mass is too small for a given configuration, the friction force will not be large enough to dissipate sufficient energy. On the other hand, if the damper mass is too large, it will get into "stick" condition, thereby limiting the relative motion across the interface and hence the amount of energy dissipation. In both cases, the friction damper will be inefficient, and between these two extremes there exists an optima.

However, an application of these procedures to determine the equivalent viscous damping values in turbine blades is not successfully implemented.

Based on experimental work, Rao et al. [2] quantified blade damping as a function of strain amplitude in each mode of vibration for different speeds. This non-linear model of damping has been successfully used in evaluating the resonant stresses [3]. In this research a novel method is clarified in order to estimate material damping, friction damping as well as combined material and friction damping using a finite element code, ANSYS.

Where EH is energy loss per unit volume, J is a constant of proportionality, s is the local stress and n is a damping exponent.

The total energy dissipated by material hysteresis is obtained by integrating the above stress relationship throughout the structure. E. P. Petrov and D. J. Ewins [5] conducted comprehensive studies into the general nature of material damping and presented damping results data for almost 2000 materials and test conditions. Their result clearly clarified that the logarithmic decrement values increase with dynamic stress, i.e., with vibration amplitude, where material damping is the dominant mechanism.

To determine the resonant stress of a turbine blade passing through a critical speed, the most practical approach is to use a viable commercial code such as ANSYS. Damping plays an important role in determining this stress value accurately and experimentally, Rao et al. [2] demonstrated a method of quantifying the equivalent viscous damping in each mode at different rotational speeds. Rao et al. [6] used such a model to obtain the resonant stresses. A procedure to determine the equivalent viscous damping by computational means is demonstrated below.

A simple rectangular blade (Sandvik O&T steel) 5 cmX1 cm with a T root is considered for the study. The blade length is 30 cm. The contact surfaces on either side are 5 cmX1 cm. The disk is taken to be 14 cm long and 25 cm wide with 1 cm thickness for the purpose of modelling and the contact surfaces are 4 cm from the top of the disk. The blade root is taken as 15 cmX5 cm. The blade and its root are modelled using 606 SOLID 45 elements [7]. The interfacial surfaces between the blade root and disk are modelled as 20 CONTACT 173 and 20 TARGET 170 contact elements. A friction coefficient 0.4 is assumed between the contact elements. The material density is 7800 kg/m3. The elastic modulus is taken as 210 GPa. The material damping property is taken from Ref. [8] 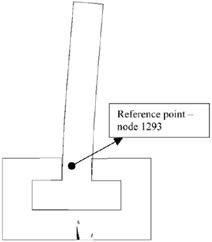 Damping is determined as a function of strain amplitude at the reference point for the given mode and speed. The same procedure can be applied to obtain the equivalent viscous damping values for other modes at the same speed. Here, only one mode is considered to illustrate the procedure.

The steps in calculation are illustrated below for 200 rpm. With the help of ANSYS, the natural frequencies and orthonormal mode shapes are first determined. For determining the material damping characteristics the contact elements are closed.

The first two natural frequencies are 82.6 and 383.67 Hz. For a similar case, considered the chord wise mode to determine friction damping [1,9]. Here the second mode corresponding to the chord wise direction is considered to illustrate the procedure. This mode shape is shown in Fig. 1. To estimate the damping in each mode the following procedure is adopted.

The total damping energy D0 (Nm) is given by

Where v is the volume.

Where W0 is the total strain energy (Nm).

Where C is the equivalent viscous damping (N s/m), ω is the natural frequency (rad/s), K is the modal stiffness (N/m).

; the total damping energy is

; the strain energy is

; the loss factor is

; the equivalent viscous damping is

and the damping ratio is 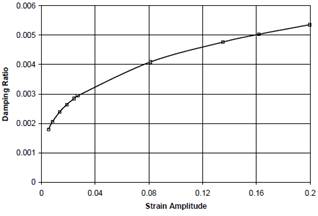 Fig. 2. Material damping given as equivalent viscous damping ratio as a function of reference strain amplitude for the chordwise mode.

To determine the equivalent viscous damping from friction at the interfaces between the disk and root, the omega load corresponding to the desired speed is given, e.g., 200 rpm. An impulse, say 60 N, is then applied at the blade tip in the required (chord wise) direction to excite the chord wise mode. The response thus obtained is used to determine the friction damping as a function of reference point displacement. A typical decay curve obtained is shown in Fig. 3. The damping due to friction is calculated from this response decay curve [10]. 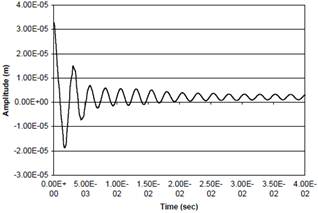 Initially, when the displacements are large, the damping is high and the decay is rapid [11].

Subsequently the decay envelope is a straight line following Coulomb’s law [12]. Using this decay curve, the equivalent viscous damping in the system as a function of the strain amplitude at the reference point is generated. Fig. 4 gives the equivalent viscous damping as a function of the reference displacement at 200 rpm. At higher speeds, the interfacial slipping disappears as the contact elements get closed. The free vibration decay curve at 800 rpm is given in Fig. 5. It can be inferred that there is practically no damping in the system due to friction. 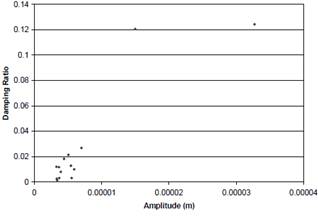 Fig. 4. Equivalent viscous damping as a function of amplitude at 200 rpm due to interfacial friction. 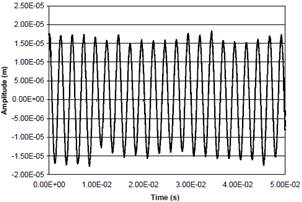 Fig. 5. Free vibration decay at 800 rpm due to interfacial friction.

The results from the above investigation are presented in graphical form in Fig. 6. 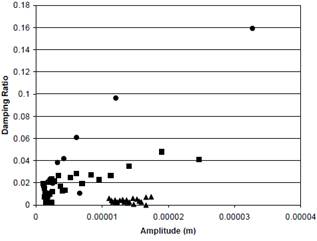 As can be seen from Fig. 6, the influence of friction gradually disappears as the speed increases and only material damping is available at high speeds. The effect of material damping over friction at a low speed, 200 rpm is presented in Fig. 7. 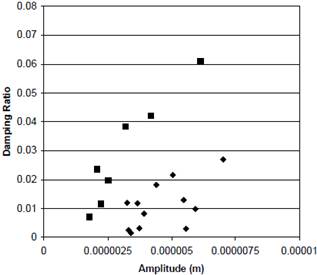 From the title of this paper, it can be inferred that the minimization of resonant stresses in turbine blades is a major concern in turbine engine. A simple procedure is outlined for optimization of damper for turbine blade so that the maximum stress experienced by any blade should be below some designated maximum value.

A method of determining equivalent viscous damping ratio for different rotational speeds and modes as a function of displacement or strain at a reference point in a blade is presented. This method can be adopted using a suitable finite element code, e.g., ANSYS or ABAQUS (ANSYS was used in this paper). The capability to assess damping in the blade from finite element codes avoids costly tests at the initial stages of design. It is shown that the effect of friction disappears with increasing speed and that the viscous damping ratio increases with strain in the blade.

The predicted displacements, stress distribution natural frequencies determined for the 1st flexure mode of the blade is carefully clarified. The damper performance which is used to arrive at optimal damper design. This can now be extended to the engine condition, that is, temperatures, and gas loads.

The non-linear model developed here can be easily applied in order to govern the resonant response very accurately and consequently improve the current design capabilities in blade life estimation.