Abstract: The stress concentration is easily occurred in the key local position of the main girder structure of casting crane with heavy load. The sub model method has the advantages of high efficiency and high precision in solving the complicated stress and strain problems of the local structure. Based on the result of finite element model analysis of whole bridge girder, the sub model technology is used to cut the local model of the main beam and partition more refined finite element meshes. The cutting boundary displacement of the whole bridge girder model is regarded as the forced displacement load that is applied on the boundary of the local model. The results that are closer to the engineering practical calculation can be obtained by analyzing and solving. The engineering analysis method in this paper can provide reference for product design.

The casting crane has a large number of load spectrum, frequent use and poor working conditions. The bridge is under heavy load when lifting operations [1]. Especially when blending the molten steel, the main bridge girder structure is affected by the flame baking. Its safety performance deserves attention [2]. When the bridge girder is impacted by the frequent external load, the fatigue damage is easily occurred in the welds connecting with the transverse bulkhead and upper wing panel and the top of the web. The welds between the upper wing panel and the web and the welds between the transverse bulkhead and the web tension zone also have the same situation [3]. In order to ensure the safe operation of the crane and efficient work normally, it is necessary for the crane metal structure to carry through high precision finite element analysis and make sure the maximum stress and stress distribution in the work that may occur [4,5].

The local structure of the system with the same characteristics and properties is called the sub structure. because the structure has a variety of geometric repeatability, it can be divided into multi-level sub structure. Super-element is a kind of generalized specific unit. In practical application, it can be produced according to the need, the produced super-element is actually a sub structure that retracts internal node degree of freedom [6]. It is shown as the degree of freedom of the nodes that only have a connection to the outside, the purpose of building a super-element is to reduce the amount of computation, especially in the complex calculation process which needs many iterations (such as contact problem, nonlinear analysis, etc.), it can fully show its superiority[7]. Due to the use of the super-element, we can greatly reduce the computation time of each generation of the stiffness matrix, also reduces the computation scale at the same time, So as to obtain a higher computational efficiency.

For an actual structure, If there is the following stiffness equation:

, we can obtain condensation equation:

The equation (2) represents the element stiffness equation of the super element.

is the stiffness matrix of the super element,

The structure form of welding is adopted in the main beam of the casting crane. Lower wing panel is the most critical and dangerous part of the main beam structure. Once the lower wing panel weld appears a serious fatigue crack, it is likely to lead to safety accidents. In order to reduce the shear stress on the cross - end web plate and the bending plate, section form of T type steel and composite web plate is used in large tonnage casting crane aimed to improve the stress distribution of the welding seam. However, it increases the complexity of the cross-end structure of the main beam. The traditional calculation can not be applied to calculate accurately. In the local stress concentration area of the main beam structure, two representative hazardous areas are selected. One is the lower wing panel weld, the other is the main beam cross - end bending plate and the web weld. 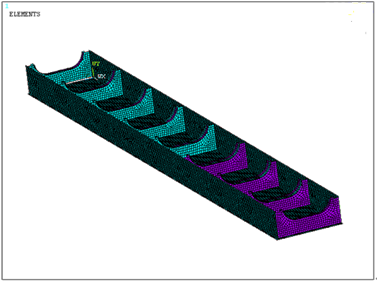 CSYS, 0: ! Delete content except the overall model of bridge girder

MSHKEY, 0: !define the way that divide mesh is free mesh 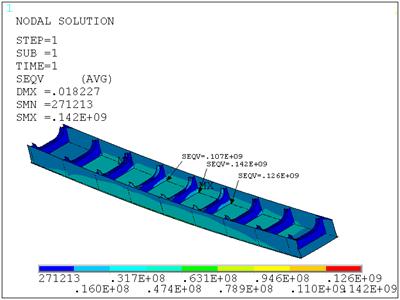 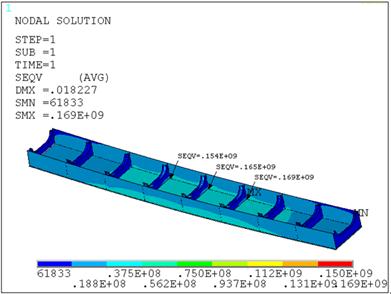 Comparing the sub modal and the whole modal, the stress amplitude of the three positions also reach 43.9%, 16.2% and 34% respectively in this picture. It is obvious that the actual bending stress of the mid-span lower wing panel is very large, the whole finite element analysis results of the main girder are smaller than the sub model analysis, and the stress distribution of the lower wing panel weld can not be more accurate. 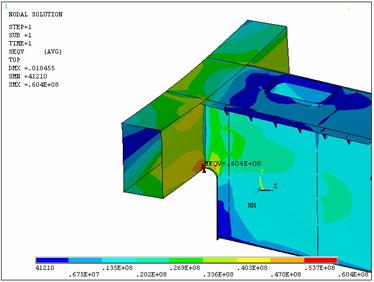 Fig. 5. The stress nephogram of whole model in cross-end (the main web side). 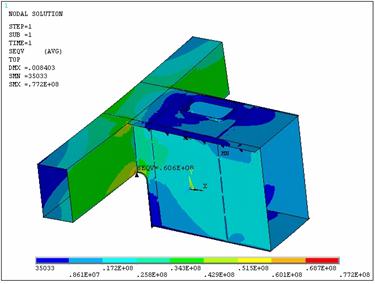 Fig. 6. The stress nephogram of sub model in cross-end (the main web side).

From Figure 5, we find that the equivalent maximum stress of the node is 60.4MPa, the minimum stress is 41210Pa, and the maximum displacement is 18.455mm in the cross - end whole model.

The finite element analysis stress nephogram of the whole model and the sub model are very similar in the main girder span web and bending plate position, the maximum shear stress is about 60.6MPa. The results show that the stress calculation of the whole model is very precise and the data is worth learning. It is also proved that the welding stress in the cross section of the large tonnage casting crane can be improved obviously after the section use the T type steel and the composite web plate. 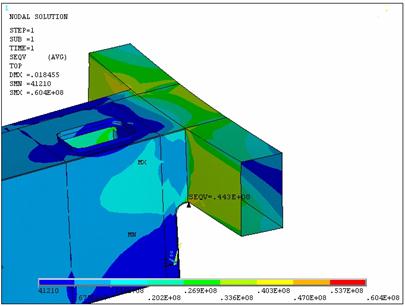 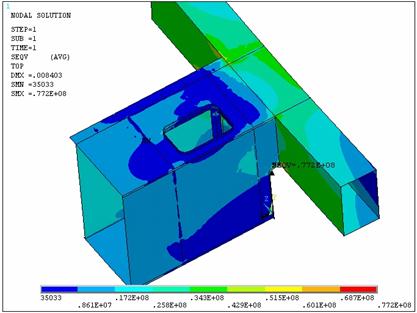 In the finite element analysis stress nephogram of the whole model and the sub model where the span side plate and the bending plate position of the cross-end main beam (the section of the main girder), the results of maximum shear stress are relatively large, but the maximum shear stress is within the allowable shear stress (100 MPa), which can satisfy the requirements of design and application. And the main web stress is similar basically with the secondary web, there is no big difference, the structural is stable.

To ensure that the sub model is constructed under the condition that the cut boundary is far from the stress concentration area, a high-precision analysis is presented for two dangerous parts of the stress distribution rules on the casting crane girder and help the designers to understand the situation of the whole girder strength reserve, so that the local structure was optimized and improved in the process of product design and manufacturing, the method can be helpful for local structure where have the dramatic changes in the force.