Abstract: In order to protect public health and safety from the inadvertent release of radioactive materials, during a reactor accident the defense-in-depth strategy must include; multiple layers of protection, such as prevention of accidents, mitigation features and emergency preparedness program that include measures such as sheltering and evacuation. In the present work RASCAL computer code is going to be used to estimate the offsite consequences of a nuclear sever accident using release pathway reduction mechanisms in order to obtain an appropriate release at a Pressurized Water Reactor (PWR) operating at its full power. The existing plant (systems, equipment) assuming that will be used for accident mitigation. Calculation of the total effective dose associated with this reduction is proposed. The data obtained showed that the spray system is the most effective mechanism to mitigate dose release during the accident.

Consideration of severe accidents at a nuclear power plants (NPP) is an essential component of the defense in depth approach used in nuclear safety. Severe accidents have a very low probability, but may have significant consequences resulting from nuclear fuel degradation. Severe accidents can be classified from the 4th level to the 7th level of INES (International Nuclear Events Scale).Severe accidents may involve very complex physical phenomena that take place sequentially during various stages of accident progression. Computer codes are essential tools for understanding how the reactor and its containment might respond under severe accident conditions. The codes are used as a tool to support engineering judgment, based on which specific measures to mitigate the effects of severe accidents are designed. Moreover they are also used to determine accident management strategies and for probabilistic safety assessment (PSA). Beyond design basis accidents: Accident conditions will be more severe than a design basis accident. It may or may not involve core degradation [1]. The accident at the Fukushima Dai-ichi nuclear facility in Japan highlighted the need for safety improvements for nuclear power plants related to beyond-design-basis natural hazards and the resulting effects on plant systems and barriers from an extended loss of electrical power and access to heat removal systems [2]. The containment structures are designed to withstand the design basis accident-induced pressure and temperature and maintain a certain degree of leak tightness [3]. Ventilation containment can help in preventing or delay the loss of cooling, or facilitate the recovery of, important safety functions such as reactor core cooling, reactor coolant inventory control, containment cooling, and containment pressure control [2]. Containment Leakage in PWRs While radionuclides are held up in the containment atmosphere, they will be subject to be removed from the containment by water sprays as well as by natural processes that causes the deposition of radionuclides on the containment surfaces. Figure 1 illustrates PWR an containment. 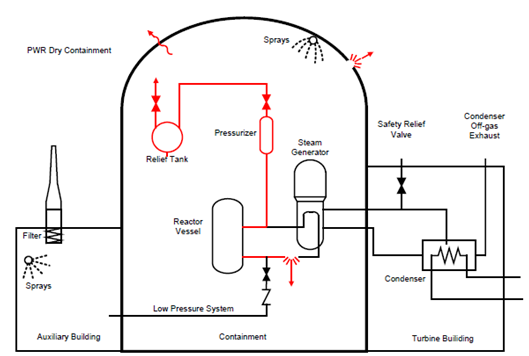 RASCAL code which stands for Radiological Assessment System for Consequence Analysis, is the software developed and used by the U. S. Nuclear Regulatory Commission (NRC), Emergency Operations Center in order to estimate the projected doses in case of radiological emergencies. Various reduction mechanisms are going to be modeled by RASCAL. The reduction of the source term by sprays is treated as an exponential function with time. There is an initial effectiveness that is going to be applied for the first 15 minutes that radionuclides are in the containment atmosphere and then reduced effectiveness acting after 15 minutes will be according to equation (1).

Where MFR(k) is the mass flow rate out of containment, during time step k. 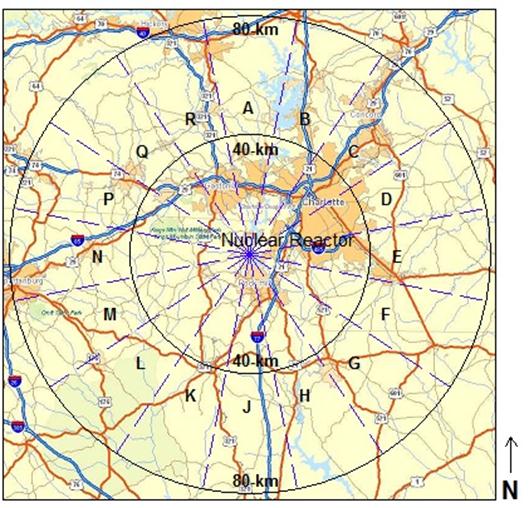 The weather data are measured on a multi-level tower and consist of wind speed and direction, air temperature, and atmospheric stability. The reporting and averaging interval may vary but is usually 15 minutes. Note that precipitation is not measured or reported. Normally you will enter the data measured at the lowest tower level (typically 10 m or 30 ft). You can use elevated measurements but will need to change the measurement height in the program. RASCAL adjusts winds to the release height so using surface data is not an issue. ERDS has some limitations with respect to weather data. It is assumed the opening will remain open for 3 hours and then be completely closed. In our case, use the predefined Standard Meteorology data set as follow in table (1).

A postulated Nuclear Plant, a PWR 1000 MW with ice condenser containment had been operating at full power. The reactor scrammed at a certain time and the core was uncovered. There was a direct release path through the pressurizer relief tank. We assume that the release to the environment started as soon as the core was uncovered. We will first run this problem After the initial run, we will make changes to the release pathways to reduce the size of the release. There are six cases to calculate source term and doses.

Case 1: Non active reduction mechanisms operating, with a 10 cm diameter hole in the containment with containment at the maximum design pressure of 103 Kpa. It is assumed that the hole remain open for 3 hours (from 13:30 until 16:30) and then be completely closed.

Case 2: Reduce the containment pressure by a factor of 3; from 103kpa down to 34kpa

Case 3: Reduce the hole size to 5cm diameter with pressure at 34kpa

Case 4: Assume that the ice bed is not exhausted

Case 5: Turn on the recirculation fans

Case 6: Turn on the sprays

The mechanism changes for all studying cases describes at table (2). In the early phase : Core heat-up due to decay of Fission Products (FP), Core material oxidation (by steam), Liquefaction and melting of core materials and release and transport of Fission Products. A comparison between total effective doses equivalent (TEDE) at different distances away release point for all cases was illustrated in figure 3. It is clear that there is highest (TEDE) in case 1, where all mechanism off and Ice bed exhausted. There is a slightly decrease in TEDE value for case2, due to the pressure decreasing by factor 3 so immediately evacuation for zone (PAZ 3- 5Km). The operating organization of a facility taking migratory actions in a nuclear or radiological emergency such as discharge of radioactive material to the environment, provided that the appropriate off-site organizations are notified in advance [5]. Sheltering and iodine prophylaxis uses for urgent precaution zone (UPZ15-30) to protect public. It is obvious that the use of fans in case 5 decrease TEDE about 18times, whereas the use of sprays in case 6 is the most effective to decrease TEDE dose. The containment spray pump will take suction from the refueling water storage tank and pump the water into spray rings located in the upper part of the containment. The water droplets, being cooler than the steam, will remove heat from the steam, which will cause the steam to condense. This will cause a reduction in the pressure of the building and will also reduce the temperature of the containment atmosphere (similar to the operation of the pressurizer). Like the residual heat removal system, the containment spray system has the capability to take water from the containment sump if the refueling water storage tank goes empty [6]. Figure 4 illustrate a comparison between release behavior of case 1 and case6. In case 1 the plume exposure pathway EPZ has a radius of about 10 Km from the reactor site. The actions for this EPZ can include sheltering, evacuating, and taking potassium iodide pills to protect people who inhale or ingest airborne radioactive iodine. The ingestion exposure pathway EPZ has a radius of about 50 Km from the reactor site. The actions for this EPZ can include a ban of contaminated food and water to protect people from radioactive material in the food chain [7]. It is noted that the use of mechanism, case 6 reduce release pathway to more than seven hundred times where there is no dangerous dose exist (exceed than 50 mSv). Figure 5 and 6 shows the change of release rate with time of the I131 and 137Cs case 1 and case 6 results respectively. It is clear that a reduction factor of about 103 is observed for sprays in the first hour and a factor of 107 after six hours. Acceptance criteria for sever accidents for long term effects the 137Cs release limit needs to be below the prescribed value (e.g.100 TBq) [8]. 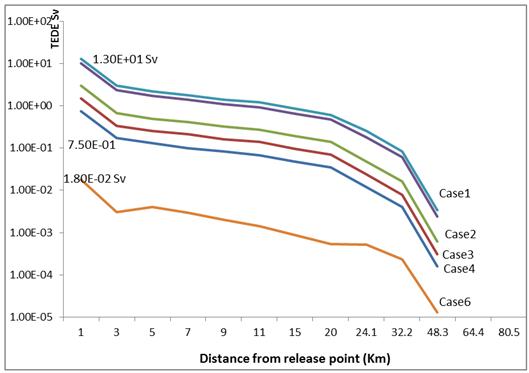 Figure 3. TEDE at different distances away from release point. 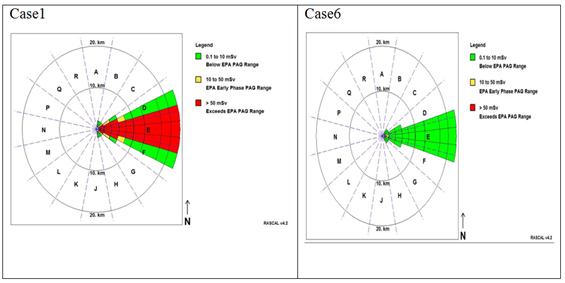 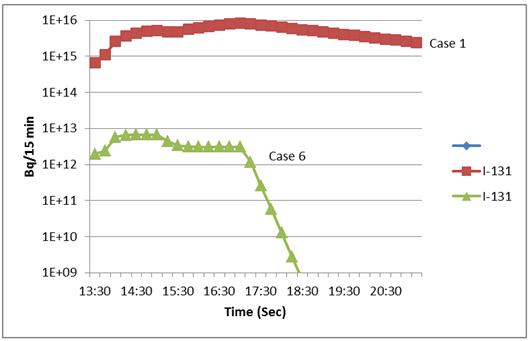 Figure 5. Rascal source term for I-131 radionuclide versus time. 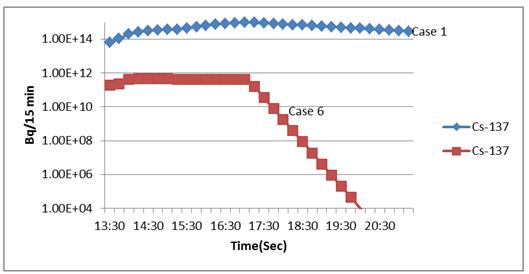 Release of radioactivity to the environment in the event of an accident in a reactor can be limited if the containment maintain structural integrity and the isolation system functions properly. Particularly as a result of a Loss of Coolant Accident (LOCA), the engineering safety feature (ESF) system functions to localize, control, mitigate and terminate such accident and hold exposure levels below the limits. Commonly shared principles for all types of NPPs and for all countries: "to prevent with high confidence accidents in nuclear plants; to ensure that, for all accidents taken into account in the design of the plant, even those of very low probability, radiological consequences, if any, would be minor; and to ensure that the likelihood of severe accidents with serious radiological consequences is the likelihood of severe accidents with serious radiological consequences is extremely small [9]. The preventive measures improving in order to further reduce the probability of core melt, and simultaneously incorporating, right from the design stage, measures for limiting the consequences of a severe accident. IAEA target values for core damage frequency (CDF) target values for core damage frequency (CDF)

• For existing plants: 10-4 per reactor-year

The general approach adopted by NEA member countries relies on all relevant aspects of the implementation of defense-in-depth (DiD) in the form of a series of design and procedure provisions to prevent and mitigate incidents and accidents that could lead to a large and early radioactive release. This concept is supported by emphasis on the inherent safety characteristics of the reactor, and insights from deterministic and probabilistic safety analyses to evaluate and optimize the overall plant design. During its October 2012 meeting, the NEA Steering Committee held a policy debate on nuclear safety defense-in depth. Participants in the debate recognized that the concept of defense-in-depth is valid, but that issues have been raised post-Fukushima regarding its implementation that need to be further reviewed and improved. They stressed that responsibility for safety lies with the operator, but that the regulator has an important role to play in ensuring that the barriers in place to protect the public and the environment remain effective [10].