On the Inverted Gamma Distribution

distributions. This result follows from the main theorem concerning the form of the convolution of inverted-gamma distributions with demi-integer shape parameter.

Witkovsky in 2001 [9] presented a formula for evaluation of the distribution of independent inverted Gamma random variables by one dimensional numerical integration. This method is applied to computation of the generalized p-values used for exact significance testing and interval estimation of the parameter of interest in the Behrens-Fisher problem and for variance components in balanced mixed linear model.

Ali et al. in 2008 [3] defined skew-symmetric distributions based on the double inverted.

Gamma, double inverted Weibull and double inverted compound gamma distributions, all of which have symmetric density about zero. Expressions are derived for the probability density function (pdf), cumulative distribution function (cdf) and the moments of these distributions. They referred that some of these quantities could not be evaluated in closed forms and they used special functions to express them.

Abdulah and Elsalloukh in 2012 [1] introduced a new class of asymmetric probability densities, the Epsilon Skew Inverted Gamma (ESIG) distribution. They applied it to analyze skewed and bimodality data. In 2014 [2] the same authors presented basic properties of this distribution, such as the pdf, cdf, and moments are presented. addition, computational forms of parameters estimation of MLE and MME are used. Finally, they illustrated the theory of ESIG distribution by modeling some real data.

Llera and Beckmann in 2016 [7] introduced five different algorithms based on method of moments, maximum likelihood and full Bayesian estimation for learning the parameters of the Inverse Gamma distribution. They also provided an expression for the KL divergence for Inverse Gamma distributions which allows us to quantify the estimation accuracy of each of the algorithms. All the presented algorithms in this paper are novel. The most relevant novelties include the first conjugate prior for the Inverse Gamma shape parameter which allows analytical Bayesian inference, and two very fast algorithms, a maximum likelihood and a Bayesian one, both based on likelihood approximation. In order to compute expectations under the proposed distributions, they used the Laplace approximation. The introduction of these novel Bayesian estimators opens the possibility of including Inverse Gamma distributions into more complex Bayesian structures, e.g. variational Bayesian mixture models. The algorithms introduced in this paper are computationally compared using synthetic data and interesting relationships between the maximum likelihood and the Bayesian approaches are derived.

The probability density function (PDF) and the cumulative distribution function (CDF) for the inverted gamma random variable are respectively,

>0 is the scale parameter and

>0 is the shape parameter.

, is the upper incomplete gamma function and

In this paper we will refer to Inverted Gamma distribution by

, which is mean that the random variable

is the lower incomplete gamma function

The rth raw moment of

can be obtained as,

Then, the mean and variance of

is obtained as follows,

and The excess kurtosis

The characteristic function of

An entropy of a random variable

is a measure of variation of the uncertainty. The Shannon entropy of

can be found as follows,

Rѐnyi entropy for a random variable

can be derived as,

. It is not symmetric in

typically represents the "true" distribution of data, observations, or a precisely calculated theoretical distribution, while

typically represents a theory, model, description, or approximation of

. Specifically, the Kullback–Leibler divergence of

), is a measure of the information gained when one revises ones beliefs from the prior probability distribution

to the posterior probability distribution

. More exactly, it is the amount of information that is lost when

is used to approximate

,defined operationally as the expected extra number of bits required to code samples from

using a code optimized for

rather than the code optimized for

So, relative entropy for a random variable

can be found as follows,

Inferences about R = P[Y < X], where X and Y are two independent random variables, is very common in the reliability literature. For example, if X is the strength of a component which is subject to a stress Y, then R is a measure of system performance and arises in the context of mechanical reliability of a system. The system fails if and only if at any time the applied stress is greater than its strength.

Let Y and X be the stress and the strength random variables, independent of each other, follow respectively

, R can be found as follows as a second way,

The main aim of this section is to study different estimators of the unknown parameters of IG distribution.

is a random sample from

Here we provide the method of moments estimators of the parameters of a (IG) distribution when both are unknown.

Since the mean and variance of X which is follow IG (

are defined in (6) and (7) respectively, then the coefficient of variation is,

The CV is independent of scale parameter β,

By equating the sample

Since the mean and mode of X which is follow IG (

is independent of the scale parameter

, then, after calculating the sample mode and the sample mean and substituting their values in (24), One can get the AMME of

4.4. Estimators Based on Percentiles (PE)

Kao in (1959) [5] originally explored this method by using the graphical approximation to the best linear unbiased estimators. The estimators can be obtained by fitting a straight line to the theoretical points obtained from the distribution function and the sample percentile points. In the case of a IG distribution, it is possible to use the same concept to obtain the estimators of α and β based on percentiles because of the structure of its distribution function.

can be obtained by minimizing

Equation (d.1) is a nonlinear function of

.It is possible to use some nonlinear regression techniques to estimate

is the most used estimator of

This method was originally suggested by Swain, Venkatraman and Wilson (1988) [8] to estimate the parameteres of beta distribution. Therefore in the case of IG distribution, the least squares estimators of

respectively, can be obtained by minimizing,

The weighted least squares estimators of

5. The Empirical Study and Discussions

We conduct extensive simulations to compare the performances of the different methods, stated in section 4, for estimating unknown parameters of Inverted Gamma distribution, mainly with respect to their mean square errors (MSE) for different sample sizes and for different parameters values.

The experiments are conducted according to run size

. We reported the results for

(large sample) and for the following different values of

The results are reported in table (1). From the table, we observe that,

1)  The MSE's decrease as sample size increases in all methods of estimation. It verifies the asymptotic unbiasedness and consistency of all the estimators.

3)  The performances of LSE, EMME and AMME are according to their order.

4)  The performances of EMME's and AMME's are close to each other.

5)  For small (n=10) sample size and moderate (n=20) sample size, it is observed that PE works the best for both of the two parameters whereas the second best method is MLE. 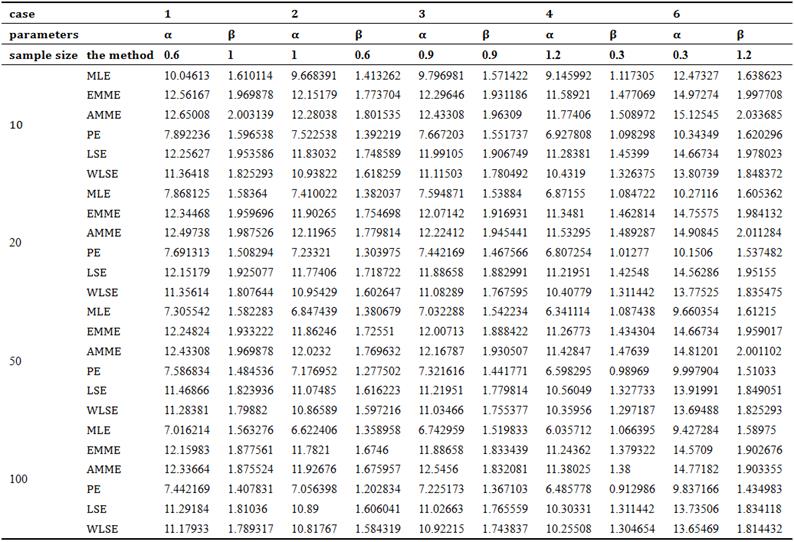 In view of the great importance of Gamma distributions in statistical analysis, the inverted gamma distribution (IGD) is considered here. For IGD we derived exact formulas of hazard function, characteristic function, rth raw moment, skewness, kurtosis, Shannon entropy function, relative entropy, quantile function and stress-strength reliability. Different methods to estimate inverted gamma distribution parameters are studied, Maximum Likelihood estimator, Moments estimator, Percentile estimator, least square estimator and weighted least square estimator. An empirical study was conducted to compare among these methods. It seemed to us that the Percentile estimator is the best one for small and moderate samples and it is also the best to estimate the scale parameter for large samples, whereas the maximum likelihood estimator is the best to estimate the shape parameter for large samples.