Abstract: Generally, to radio link engineers, determination of fade depth and refractivity of propagation links remains very significant, especially, during radio propagation planning. It gives a good insight into the expected performances of the communication link and serves as bedrock to improve on Quality of Service (QoS). In this paper, three years (2012 to 2014) radiosonde atmospheric parameter data from Nigerian Meteorological Agency was used to determine the point refractivity gradient along with fade depth for Calabar, in Cross River state of Nigeria. In respect of the refractivity gradient for Calabar, the results showed the highest occurrence is in January with refractivity gradient of -33.0018 N units and the lowest refractivity gradient occurred in August with value of -305.2692 N units. Furthermore, the fade depth from the three different International Telecommunication Union (ITU) models; namely, ITU-R P.530-16 model, ITU-R P.530-14 model, and ITU-R P.530-9 model also indicated monthly and seasonal variations, with yearly average values of 139.74576 dB, 129.79196 dB and 154.57691 dB respectively.

In this paper, three years (January 2012 to December 2014) radiosonde data are obtained from the Nigerian Meteorological Agency (NIMET). Particularly, the radiosonde data are acquired in clear air (that is no rain, fog, hail, etc) at the interval of six (6) seconds from ground level to the height of eight hundred meres (800m). The measurement are obtained in Calabar in the Cross River state of Nigeria. However, it is also of great significance to note that the major parameters obtained include temperature, pressure and relative humidity. The monthly mean refractivity values for each of the altitude levels are also computed using the measured atmospheric parameters. Inverse distance weighting spatial interpolation technique is used to obtain the missing data items. Refractivity can be computed as follows [7,8,9,10,11,13,14,15]:

Atmospheric pressure is denoted as p

Temperature in (Kelvin) is denoted as T

In Eq 3, Humidity is denoted as H

Also, for each of the locations, the Point refractivity gradient is computed as follows [7,8,9,10]:

is the lower atmospheric refractive index;

The Geoclimatic factor, K (for quick planning) can be determined based on the procedure given in each of the selected ITU models, where

is the point refractivity gradient in the lowest 65m of the atmosphere not exceeded for 1% of an average year (Ojo, Ajewole and Adediji, 2015). Hence, according to ITU-R P.530-16, for quick planning applications the geoclimatic factor, K can be estimated as [15]:

Also, for detailed design applications using ITU-R P.530-16, the percentage of time pw that fade depth A (dB) is exceeded in the average worst month can be estimated [15]:

f is the frequency (GHz) and

is the altitude of the lower antenna (i.e. the smaller of he and hr); where K is obtained from equation (5). Also, for detailed design applications using ITU-R P.530-14, the percentage of time pw that fade depth A (dB) is exceeded in the average worst month can be estimated as [16]:

where K is obtained from equation (5).

Similarly, according to ITU-R P.530-9, for quick planning applications the geoclimatic factor, K can be estimated as [17]:

Again, for detailed design applications using ITU-R P.530-9, the percentage of time pw that fade depth A (dB) is exceeded in the average worst month can be estimated as [17]:

where K is obtained from equation (8).

Let the antenna heights be

for the transmitter and

for the receiver; then the magnitude of the path inclination |εp| (mrad) is calculated as follows:

where d is the path length (km). 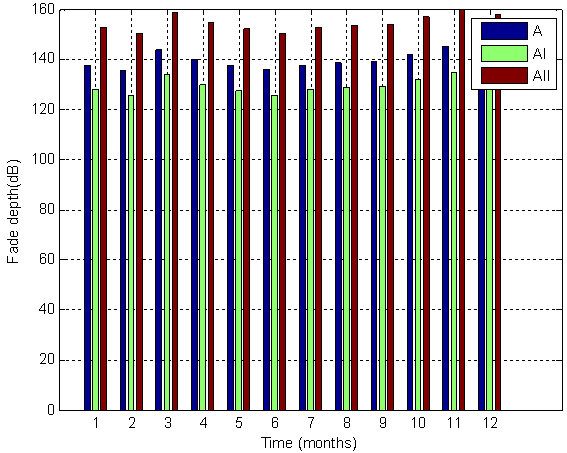 For ITU-R P.530-9, the least fade depth occurs in February with 135.6648 dB and the highest fade depth of 145.1393 dB occurred in November. However, high fade occurrence are mainly observed between the months of October and December which can be deduced that there is high fade depth in this period due to the occurrence of high atmospheric activity within the period. The ITU-R P.530-14 detailed planning model shows that the lowest fade occurrence is mostly experienced in the month of June with 125.7425dB and the highest in November with 135.1855dB. The distribution also shows a relative increase in fade occurrence between July and December but are higher in fade as compared to ITU-R P.530-9. ITU-R P.530-16 model shows that the least fade occurrence takes place in June with 150.5275dB which is high as compared to previous two models. The highest fade also occurred in November with 159.9705dB which appears high when compared with the other two ITU-R models considered. The months of May to November also show a relatively higher fade occurrence due to higher air pressure and water vapour in the atmosphere in those months. 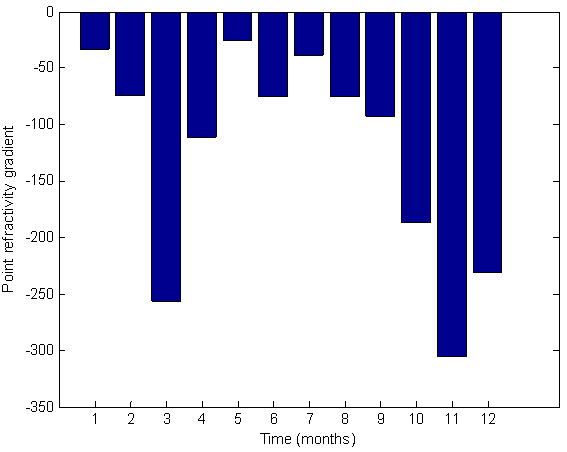 is relatively high between May and September which are particularly rainy season months.

) tends to be higher in the rainy season months.

The authors would like to express their heartfelt gratitude to Nigerian Meteorological Agency for providing meteorological data used for this work.