Structural health monitoring (SHM) has gained extensive attentions from engineering fields and it has been successfully applied to various engineering applications, such as civil, industrial, electrical, and aerospace engineering, etc. By collecting data from sensors on structures, a SHM system can track the health condition of a structure, which could allow the users to facilitate the adequate maintenance in advance to avoid system failure. To obtain the dada for a SHM system, various sensors can be applied such as electrical, magnetic, acoustic, and optical fiber sensors [1], etc. Among these various sensors, fiber Bragg grating (FBG) sensor has been popularly applied in a SHM system due to its unique advantages of compact size, remote interrogation, electromagnetic hardening, high sensitivity, passive operation, real-time, and distributed sensing [2].

The FBGs are made by laterally exposing the core of a single-mode fiber to a periodic pattern of intense ultraviolet (UV) light, which creates a fixed refractive index modulation, called grating. At each periodic refraction change, a small amount of light is reflected, forming a coherent large reflection at a particular wavelength known as the Bragg wavelength. Light signals at wavelengths other than the Bragg wavelength propagate through the grating with negligible attenuation or signal variation. The ability to accurately preset and maintain the grating wavelength is a fundamental feature and advantage of fiber Bragg gratings [3,4]. Although FBGs are can maintain permanent refractive index modulation in the fiber core, the performance of a FBG sensor is still significantly dependent on its working environments. The FBG sensors, either for strain, temperature, vibration, or chemical sensing, have very restricted requirements for the sensors’ operational conditions. Exposure to high temperature environments usually results in the bleach of the refractive index modulation, limiting its temperature environment to be of less than 300°C [4].

Tremendous research efforts have been devoted to the development of high-temperature-resistant FBG sensors [5-10].Using high peak power UV lasers, high reflectivity gratings known as Type II grating can be inscribed, which can work to temperature over 1,000°C [5,6]. Ultrahigh peak power radiation generated by femtosecond pulse duration infrared (fs-IR) laser system [7] can also be used to fabricate high temperature resistant grating [8]. If silica based fibers are used to fabricate the fs-IR generated grating, it can work temperature up to 1,000°C and if sapphire fibers are used, it can work above 1,750°C [9]. High temperature FBG sensor can also be doped using hydrogen-loaded germanium to resist temperature up to 1,000°C [10]. However, with these special design requirements, the fabrication of these high – temperature - resistant FBG sensors are very complex and costly, limiting their wide application for SHM of large-scale structures.

In addition to special fabrication of FBG sensors to resist high temperature, metal and non-metal coatings in single or multiple layers have been investigated as well for environmental protection for FBG sensors. Metal layers would increase the sensitivity of the sensor in extreme temperature. At the same time, metal coatings also reduce the sensor exposure to oxygen at extreme temperature, resulting in enhancement on environmental robustness. For instance, metal coatings with single layer of Al [11], Ni, Ag [12], and Au [13] have been investigated for high temperature environments up to 700 °C (973 °K). One single layer of non-metal coatings such as carbon fiber [14] and ceramic powders, though not popular as metal coatings, have also been investigated. One single coating on the top of the sensor would enhance the durability of the sensor in extreme temperature environments. However, the single layer coating will cause a thermal, thus, stress concentration within the coating. The resulted stress concentration will bring up micro or macro cracks inside the coating [12] and further alter the sensor’s function and properties. Consequently, multilayer composite coatings which could reduce the thermal stress concentration in layers and retain the accurate sensing property of the sensors are needed.

2. Theoretical Analysis of the Composite Coating

Heat transfer analysis is adopted to analyze the behavior of a multi-layer composite coating for FBG sensors in high temperature environments. Figure 1 shows an example layout of a three-layer structure of a composite coating, which has the thermal conductivity of each layer of materials to be k1, k2, and k3, respectively. It is assumed during the analysis, no internal heat is generated, the system is isolated (no heat loss), and the heat flows at each layer are equal. For a three layer composite material, we have [16,17]:

The thermal conductivity of the second layer of the composite can then be determined as follows:

Figure 1. Layout of the three-layer composite.

To apply the theoretic analysis, numerical simulations using commercial finite element modeling software ANSYS was performed to design the appropriate composite coating. The design started from a selection of a four-layer composite material with different thermal conductivity but same thickness (0.5 mm). Figure 2 shows the thermal conductivity of each layer and temperature boundary condition. An epoxy layer is required to attach the surface sensor which will be located the bottom layer of the composite. Two metallic layers using aluminum and NiCr were applied for initial analysis. In between the two metallic layers, one random layer of material with assumed thermal conductivity of 0.5 W/m.K was applied. The temperature at the outer layer of the coating which is assumed to be 1,200°C (Tout=1,200°C), and the temperature required on the surface sensor of the spacecraft is assumed to be at room temperature of 25°C (Tin=25°C) so that regular sensors can work appropriately.

Figure 3 shows the simulation results of the temperature variation through the composite coating. It can be seen that when a material with thermal conductivity less than 0.5 W/m.K was used in the third layer of the composite, the heat transfer reduced significantly from 1,200 °C to less than 700 °C. Aluminum as an intimidate layer did not contribute to the heat reduction, resulting in a massive heat transfer to the epoxy layer. The predicted temperature on top of the epoxy was around 600 °C. The numerical simulation suggested that the aluminum must be replaced with a materials with less thermal conductivity and an epoxy with better high temperature resistant must be selected. 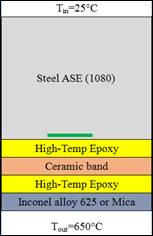 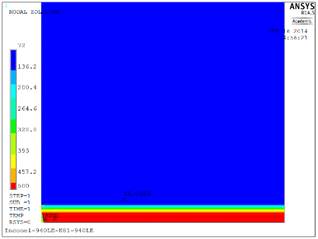 3.1. Validation of the Composite Coating

To validate the design of the composite coating, one sample using the composite layer layout as shown in Figure 4 was constructed and high temperature experiments were conducted. Figure 6 (a) shows the experimental setup for temperature measurement of the sample. A heat plate was used to provide the high temperature environment on the bottom of the apparatus up to 650°C. One steel block was placed on bottom and top of the sample to form a uniform heat transfer. The height of the each steel block was 18.9 mm. Four thermal couplers (thermo-coupler K type) were placed, one on top of the hot plate, one on top and bottom of the test sample, and one above the top steel block. The sample was isolated from environments using thermal insulation material as shown in Figure 6 (b). A water-cooling system was applied to provide the desired room temperature environment on the top of the test sample.

Figure 6. Experimental test set-up for (a) temperature sensor layout and (b) test setup. 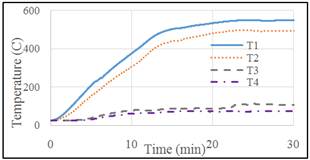 Figure 7. Variation of temperature at each layer.

3.2. Validation of the Coated FBG Sensors in High Temperature Environments

To validate the effectiveness of the developed composite coating for protecting FBG sensors from high temperature environments, another sample using the same materials in last section with a size of 2mm was fabricated with two types of sensors attached on the top of the sample. Figure 8 (a) shows the attached FBG sensor. Figure 8 (b) shows the detail measured temperature distributions along the test sample from the thermal couplers. A heat reduction of 65% was observed by using a water cooled system and proper insulation. 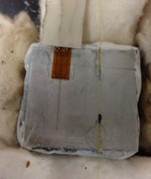 Figure 8. (a) Sample layout and (b) Temperature variances for the sensing test.

With a temperature of more than 200°C on the top of the test sample, electrical strain gauges are expected to be damaged, especially the wires to connect the sensors. Test results indicated the electrical strain gauges lost very quickly after the starting of the test. However, the fiber optic sensors, FBG sensors, were expected to work up to 300 °C. Figure 9 (a) illustrates screen shot of the spectrum detected by FBG sensor and Figure 9 (b) shows the measured temperature change by the FBG sensors with time. The test results indicated a successful survival of the FBG sensors through the high temperature tests. The developed composite coating successfully protect the FBG sensors from damaging by the high temperature environments from the other side of the test sample. 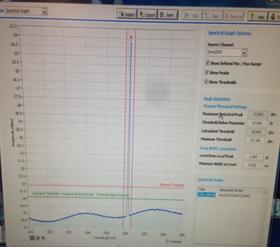 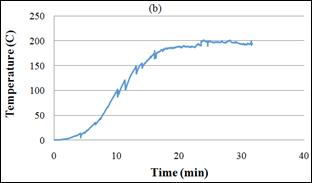 Figure 9. (a) Screen-shot of example FBG sensor spectrum and (b) Temperature change measured by FBG sensor Vs time.

Table 2 compares the results obtained from embedded thermocouples and the FBG sensor. The relative variance between the two different measurements is around 2%, indicating an effective monitoring system using FBG sensors for temperature measurement.

Table 2. Comparison between results obtained from thermocouple and FBG sensor on top of the test sample.

In this paper, a theoretic and simulation model was developed to design innovative multilayer composite coatings for FBG sensors in high temperatures. A four-layer composite with both metal and non-metal materials was developed and numerical simulation approved the effectiveness of this composite for temperature up to 600 °C. Laboratory tests were performed to validate the simulation and a relative error of less than 10% was observed, which indicating an effective model for the composite design analysis. The developed composite coating was used to protect a FBG sensor in laboratory. The experimental results approved a 65% of heat reduction by using the developed coating and the survival of the sensor under such a high temperature environment of 600 °C. In the near future, higher temperature will be tested and the structural behavior of the developed insulation will be investigated as well.

Financial support to complete this study was provided by the ND NASA EPSCoR under Agreement No.FAR0021960 and U.S. DOT PHMSA under Agreement No. DTPH56-13-H-CAAP05. The findings and opinions expressed in the paper are those of the authors only and do not necessarily reflect the views of the sponsors.