Abstract: Wireless Sensor Network (WSN) is an emerging wireless communication networks to provide potential secure optimized data routing between source and destination. Presently the performance analysis of the Wireless Sensor Network routing technique and security protocols is the major research issues. A major issue in wireless sensor network (WSN) is the energy constraint in a node and its limited computing resources, which may pose an operational hazard or limitations on the network lifetime. Therefore, analyses of innovative secure routing techniques are required to utilize the resources of WSN to improve the life time of network in WSN. To design & develop any innovative wireless sensor network routing and security protocol, the network characteristics & its design issues are important consideration. The proposed spherical Grid Routing Protocol (SGRP) is designed and developed to enhance Quality of service to improve WSN performance using NS2 simulator compare to compared to modified LEACH techniques. The packet transmitted, packet received, average energy, throughput and packet delivery ratio are the main common performance measures that are used for performance analysis of proposed SGRP protocols.

In Wireless Sensor Network (WSN) each sensor node component is mainly consists of sensors, processor, memory and radio trans-receiver. Each sensor node is responsible to sense input attribute such as temperature, humidity, or pressure depending on the application involved and forward the sensed data to the destination using optimized energy efficient routing path. The figure 1 shows the general structure of WSN.

Presently there are plenty of algorithms for routing sensor sensed data in Wireless Sensor Network applications. Sensor nodes can be used for communication purposes with efficient use of their energy in various domains based on the requirement & utilization of resources more effectively to perform a specific task. Due to this WSN are extensively used in environmental monitoring, distributed control system, detection of radioactive sources, agricultural & farm practices, internet, military and surveillance. The characteristics of wireless sensor networks are summarized below:

• Battery-powered sensor nodes: Sensor nodes are deployed in an application where it is very difficult to replace or recharge the batteries.

• Self-configurable: Any changes in network autonomously configure themselves into a communication network.

• Unreliable sensor nodes: Sensor node may fail due to its deployment in harsh or hostile environment.

• Data redundancy: Multiple sensor node deployed in a region have a certain level of redundancy w. r. to data.

The main design objectives of sensor networks are:-

• Scalability: Design requirement for sensor network must be scalable to grow in network size.

• Self-configurability: Sensor network must reconfigure themselves in case of topology changes and node failures.

• Adaptability: Network protocol designed should be adaptive to node density and topology changes.

• Fault tolerance: Sensor nodes should have the abilities of self testing, self-calibrating, self-repairing, and self-recovering.

• QoS support: QoS is measured in terms of delivery latency and packet loss. 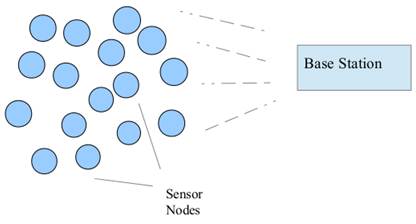 The implementation of wireless sensor network in remote area and its maintenances is challenging task due to resource constrained nature of wireless sensor networks. To achieve data confidentiality and integrity in wireless sensor network there are presently available varieties of schemes in symmetric and asymmetric encryption scheme. To provide security to routed data while it is on the way from the unauthorized access by hacker there is need to design and develop optimized energy efficient secure routing protocol to improve quality of service as well as network life time compare to existing algorithm. A general public key asymmetric encryption scheme is shown in figure 2.

There are varieties of wireless sensor network communication topological patterns as shown in figure 3. These Patterns are used to form a topology for the WSN.

• Local Communication: Using this pattern anode information is shared among its neighbors and is used to transmit the data between the two nodes directly.

• Point-to-Point Routing: Here, a data packet is transmitted from a randomly chosen node to another node. It finds application in a wireless LAN environment.

• Convergence: Multiple nodes data packets are shared to a single base node. It finds application for data collection in WSNs.

• Aggregation: Processing of data packet happens in the intermediate nodes and the aggregated packet is routed to the base node.

• Divergence: It is used to send a request or data from a base node to another sensor node.

Table 1. A Summary on Comparison of Grid Routing.

Secure Routing technique uses a strategy to ensure connectivity between the different nodes in the WSN. A number of studies as shown in table 1 that compares Grid based Routing scheme. The GRID routing comparison is made to analyze & understand its strength and weaknesses. The popular grid based routing protocols are GBDD, GRASS, ARA, GBDAS & CBDAS.

Elliptic curves are used in public key cryptography for securing information from unauthorized access. Let assume d is a private key which is randomly selected from [1, n-1], where n is integer no. Assuming Q being public key is computed by dP, where P, Q elliptic curve points. Once the key pair (d, Q) is generated, a variety of cryptosystems such as signature, encryption/decryption, and key management system can be set up. Then dP is calculated which is known as scalar multiplication. The term dP is also for the calculations of signature, encryption, and key agreement in the ECC system.

It requires d-1 times point addition over the elliptic curve. For an example, to compute 17 P, we could start with 2P, double that, and that two more times, finally add P, i.e. 17P=2(2(2(2P)))+P. This needs only 4 point doublings and one point addition instead of 16 point additions in the intuitive approach. This is called Double-and-Add algorithm.

Although there are many cryptography techniques are presently available, to provide a better security especially in WSN applications public key Elliptical Curve Cryptography (ECC) could be better choice for researchers. The benefit of this technique is that they uses smaller size key which need less storage, less bandwidth and less energy, thereby reducing processing and communication overhead, which is ideal for energy-constrained sensor nodes.

In the cryptographic schemes, elliptic curves over two finite fields are mostly used.

• Prime field Fp, where p is a prime.

• Binary field F2m, where m is a positive integer.

The equation of the elliptic curve over Fp is defined as:

• Point addition for EC over Fp

• Point doubling for EC over FP

A elliptic curve E over the finite field F2mis given through the following equation,

• Point Addition and Doubling over F2m

The R=P+Q can be computed:

Then R=2P can be computed:

The implementation of ECC using Deffie-Hellmen algorithm as shown in figure 4 is explained below.

An Example of ECDH:

• Alice and Bob make a key agreement over the following prime, curve, and point.

The Spherical GRID routing protocol architecture is shown in figure 5. Here sensor nodes are uniformly distributed over a field to monitor its environment. All sensor nodes transmit its data to its neighbor nodes using chain route in spherical fashion. 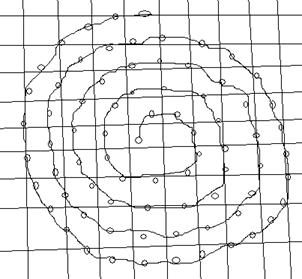 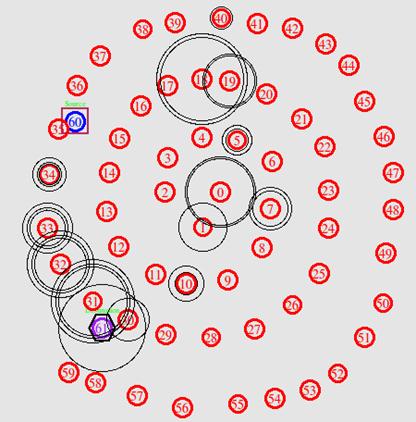 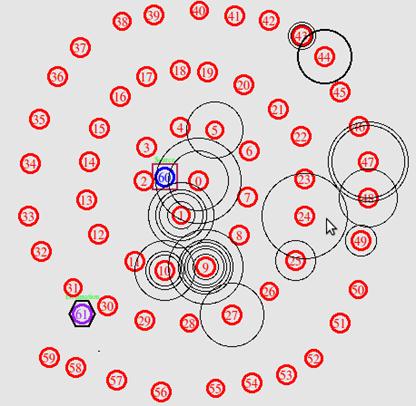 A 60 nodes SGRP WSN network is simulated using NS-2 simulator. In network scenario-I & II as shown in figure 6 & 7 respectively, 60 nodes are arranged and distributed in spherical fashion. The source node no. 60 is indicated here as target nodes and its movement are traces by its nearest sensor nodes. The nearest node to source node 60 informs about it to the destination node no. 61 using spherical path. The performance efficiency of network is evaluated using performance metric such as transmitted packet, received packet, packet delivery ratio, average throughput and average residual energy. The simulation parameter setup of NS-2 is shown in table 2. The modified leach routing protocol & its topological setup is shown in figure 8. In modified LEACH Protocol whole network is divided into no. of clustered networks & exchange of packet takes place among clusters. Also the performance evaluation of SGRP algorithm versus modified LEACH protocol is shown in figure 9. 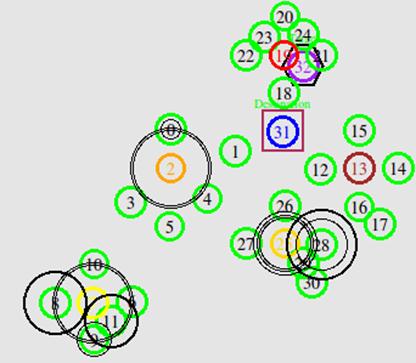 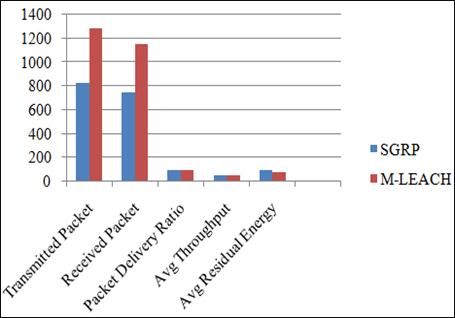