Abstract: Geophysical investigation of loss of circulation in Borehole drilling at the Auchi Polytechnic Auchi, Etsako West L.G.A, Edo State, Nigeria was carried out. Electrical resistivity sounding techniques with Schlumberger array for Vertical Electrical Sounding (VES 1) was used while modified Schlumberger array was used for Vertical Electrical Sounding (VES 2) with Australia Energy Market Commission (AEMC) Soil Resistivity meter. The Digital Ground Resistance and Soil Resistivity Tester model 6470-B was used. The Tester was produced by Australia Energy Market Commission. Geographical coordinate were obtained from a Global Positioning System (GPS) device. The quantitative interpretation of the resistivity sounding curves was done to obtain the layer thicknesses and resistivities with the computer assisted iteration techniques. Five and four geoelectric layers were resolved for Vertical Electrical Sounding (VES 1) and Vertical Electrical Sounding (VES 2) respectively. The loss of circulation within this borehole occurs around the depth of 36m. The loss zones are permeable and aerated with very high resistivity values. The void spaces within the soil layer in the horizon are not conducive. Pre-drilling geophysical investigation should not be optional but a necessity for every borehole drilling project in order to know the subsurface geology.

A borehole drilling project that is expected to meet a desired need, for which it is being embarked upon, should be carefully thought out (planned) in advance. Inadequate or outright negligence of planning has led to the outrageous rates of failure, recorded in the past drilling works. These trends have necessitated the absolute need for pre-drilling investigations (Offodile, 1983). Lack of planning in most borehole drilling project also covers the non – inclusion of experts in water resources management at the level of project conception. Furthermore, most drilling sites are managed by artisans instead of professional hydrogeologist. No wonder quality of groundwater resources development projects in Nigeria remains below average.

Geophysical methods have been very useful in determining the geological sequence and structure of the subsurface rocks by the measurement of their physical properties. Although there are varieties of geophysical techniques, which could be used in groundwater exploration, electrical resistivity method has proved reliable in delineating zones of relatively low resistivity signatory of saturated strata in various geologic terrains. (Odejobi, 1999). Electrical resistivity method has been successfully used across all the geological terrains in Nigeria and has drastically stemmed the tide of failure in borehole construction projects (Ako and Olorunfemi, 1989; Olayinka, 1999; Olayinka and Olorunfemi, 1992).

The advantage that pre – drilling geophysics offer is that one is able to anticipate the subsurface condition and prepare adequately to surmount any challenge that may arise during borehole drilling. This saves time and cost as when compared to drilling blindly when one in note sure of the formation characteristics.

The primary objectives of this investigation include:

1    Conduction of Resistivity sounding at the site and interpretation of the field Vertical Electrical Sounding (VES) data to obtain geoelectric parameters.

2    Determination of the hydrogeologic characteristics of the subsurface at the site based on geoelectric and available geologic information.

The geophysical exploration was carried out at the site of two failed borehole drilling around the office block of the Department of Mineral Resources Engineering and Electrical Engineering laboratory of the Federal Polytechnic Auchi. Vertical Electrical Sounding (VES 1) is approximately defined by the geographical coordinates of Latitude N 70 03’ 50.8’’and Longitude E 60 16’ 26.5’’ with an average elevation of about 239m above the mean sea level.

Auchi town is within the Anambra hydrogeological Basin. The basin comprises an, almost, triangular shaped embayment covering an area of about 30,000km2. It stretches from the area just south of the confluence of the River Niger and Benue across to areas around Auchi, Okene, Agbo and Asaba, west of the river, and Anyangba, Idah, Nsukka, Onitsha and Awka area, east of the river. From an elevation of about 300m, the Udu – Idah escarpment slopes gently towards the southwest into the flood plain of the River Niger and across, to the west. The basin is drained mainly by the Anambra river and its main tributaries, the Mamu and Adada (Offodile, 2002).

The Ajali formation is successively underlain by materials belonging to the Nsukka and Mamu formations. The Nsukka formation hitherto called the upper coal measure, bears sandstone, shale and coal while the underlying Mamu formation which has compositional similarity with the Nsukka, offers a higher frequency of coal occurrence.

Hydrogeologically, the Ajali formation constitutes a heterogeneous lithological sequence, with a generally deep water table conditions ranging from 30m to over 170m in places (Offodile, 2002). The sandy aquifers within the formation are friable, poorly sorted and typically whitish at depth. Also, the aquifers are often overlain by highly resistive (dry) sandy/sandstones/ clayey layer and deep down, the groundwater is ferruginised. 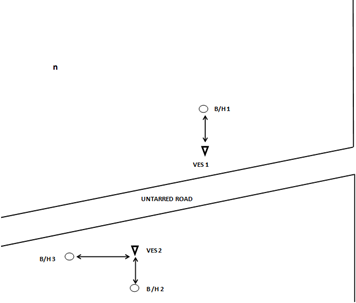 PLS note that the diagramm is not to scale

Figure 1. A schematic diagram showing the site and the ves points 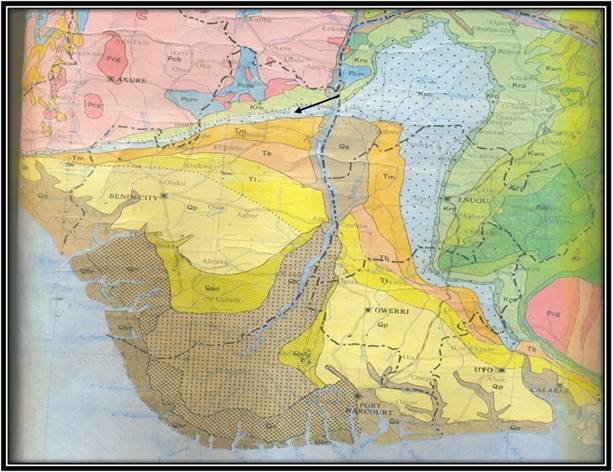 For drilling to commence and end seamlessly, the drilling fluid must be in the right proportion and viscous enough to ensure that uninterrupted circulatory process is maintained. Drilling fluid acts as lubricant, cools the bit, removes cutting from the bottom of the hole and takes them to the surface where they can be stored for inspection. The drilling mud is also expected to prevent loss of circulation.

Loss of circulation occurs when the drilling fluid penetrates the permeable and porous formations in the hole. This automatically brings the borehole drilling to a halt. Drillers run into this problem when proper pre – drilling geophysical/geological investigations are not done. This challenge can be anticipated, be fully prepared for and successfully handled with a clear understanding of the specific geology of the proposed drilling site. The loss circulation belt has been found to occur in lignites peaty and carbonaceous shales and behaves sympathetically with it (NFOR, 2006).

In the study area, boreholes 1 and 2 were abandoned due to lost circulation encountered at about 120ft (36m) and 130ft (39m) respectively. However, the third borehole, that is less than 10m away from borehole 2 was successful completed. It should be noted that while permeable and porous formation in the subsurface can cause lost circulation, the content of the permeable rock may not necessarily be liquid. It may be air in which case, the resistivity of that particular substratum becomes very high. This study therefore seeks to unveil the stratigraphical configuration of the loss zones based on geophysical data.

4. Material and Method of Study

The geophysical exploration carried out at the site was done using electrical resistivity sounding techniques (VES) with Schlumbeger array for Vertical Electrical Sounding (VES 1), while modified Schlumbeger array was used for Vertical Electrical Sounding (VES 2) due to space constraints. This was achieved with the aid of Australia Energy Market Commission (AEMC) soil resistivity meter and other field accessories. Geographical coordinates were obtained from a Global Positioning System (GPS) device.

Two vertical electrical sounding (VES) were done at the site using Schlumberger array. The total spread length (AB/2) attained for Vertical Electrical Sounding (VES 1) and Vertical Electrical Sounding (VES 2) within the limit of the available space and hydrogeological expediency were 200m and 80m respectively. Artificially generated electrical signal is known to penetrate up to AB/2 = 1000m (Kearey and Brooks, 1988). However, the 1000m depth of penetration for borehole drilling represents an outer limit in groundwater exploration and exploitation because it appears to be beyond the boundary of economic exploitation zone in terms of groundwater abstraction.

The quantitative interpretations of the resistivity sounding curves were done to obtain the geoelectric parameters (i.e. layer thicknesses and resistivities) with the aid computer assisted iteration techniques.

Layers one and two stand for lateritic topsoil and sub soil with thicknesses 1.71m and 10.57m respectively. Layer three is the sandy clay/clayey sand horizon. The fourth layer is the dry/resistive sandy horizon. Layer five of unknown thickness is the sandy clay/clayey sand layer. Vertical Electrical Sounding (VES 1) is within the immediate vicinity of the failed borehole 1. The loss of circulation within this borehole occurs around the depth of 120 ft (36m). The geoelectric layer corresponding to the loss zone is layer 4. This layer is designated as a dry/resistive horizon because of its high resistivity value. Ideally, a loss zone is expected to be porous and permeable. The voids within the soil grain are expected to be filled with fluid which could be either air or water. When the void spaces are filled with water which is a conductive fluid, the resistivity of the horizon becomes low. On the other hand, when the void spaces are filled with air which is inert, the resistivity of such horizon goes up.

For Vertical Electrical Sounding (VES 1), we can safely deduce that the loss zone is permeable. But with its high resistivity value, the void spaces within the soil layer in the horizon is not conductive. And considering that the depth to top of this geoelectric layer is about 30m, and its thickness being 19.95m, we can deduce that the horizon is an aerated zone.

5.3. Geoelctric Model and Loss of Circulation

The geoelectric models generated from the interpreted VES data give a very accurate picture of the stratigraphical composition of the subsurface layers where the lost circulation occurs in the two failed boreholes. This underscores the validity and reliability of the electrical resistivity method in unveiling the subsurface geology. If a thorough geophysical investigation has been carried out before embarking on drilling at the site, the first two boreholes would not have been abandoned because the loss zone would have been detected and if the driller is proficient enough, he would have prepared adequately for the lost circulation and successfully overcome it and complete the drilling. An essential part of the preparation to overcome loss circulation is to use a very viscous drilling mud to seal off the permeable part of the formation within the loss zone. It was also obvious that there was no hydrogeologist supervising the drilling. It is high time the society knew that borehole drilling is not a child’s play. It should be taken seriously like any other major construction work because the environmental impact of a failed borehole can be terrifying. A failed borehole that is not properly sealed up can be the receptor of a point source pollutant and contaminant that can subsequently be transmitted to the entire aquifer system of an entire area. 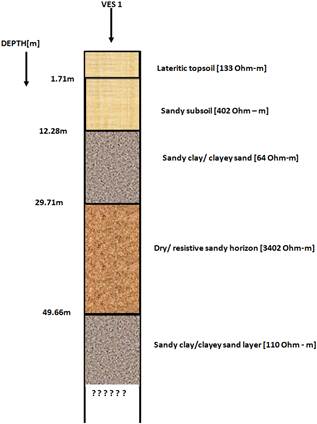 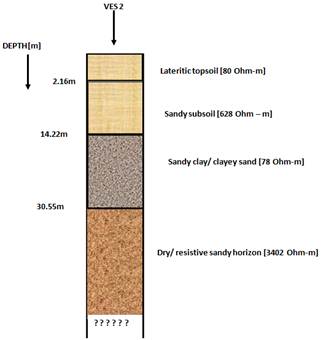 The results of the post – drilling geophysical investigations to determine the cause(s) of lost circulation in two abortive boreholes at the Federal Polytechnic Auchi, Etsako West Local Government Area Edo State, is presented in this report. Hydrogeological/hydrogeophysical deductions made from the interpreted Vertical Electrical Sounding (VES) data shows that the loss zones are permeable and aerated with very high resistivity values. The geoelctric models generated from the interpreted resistivity data agrees with the driller’s logs for the abortive boreholes.

The findings of this study serve as the basis for making the following conclusions:

• The formation where the lost circulation occurs is predominantly sandy.

• Although the formations are permeable and porous, the resistivity values are fairly high. This can be attributed to the fluid within the pore spaces of the rock/soil grains which is mainly air.

• Electrical resistivity geophysical method is very useful and reliable in showing the subsurface geology and it also helps in identifying the zone where loss of circulation occurs as well as why it occurs.

The following recommendations have been proffered based on the findings of this study:

• Pre – drilling geophysical investigation should not be optional but a necessity for every borehole drilling project in order to know the subsurface geology.

• It should be made mandatory that a competent hydrogeologist should preside over borehole drilling project and also document the entire process.

• Drilling contractors who did not follow the acceptable best practices in their job execution should be penalized.