Abstract: In this study partial substitute of barley malt by effective use of maize, potato and enset were investigated using saccharomyces cervisiae. Barley malt is the principal ingredient in the manufacturing of beer and has traditionally been the grain of choice in the brewing industry. However, it is not always economically feasible to brew with 100% malted barley, and at present time breweries are forced to minimize their costs without changing the quality of their beer. Therefore, this study was utilized Maize, Potato and Enset starch as a partial substitute for barley malt and to evaluate some physico-chemical quality attributes of the beer. All the experiments were conducted Dashen Brewery S.C, Ethiopia. The beer underwent four series of experiments in triplicate involving the starch from the three crops (50%, 62.5% and 75% starch substitute from each) with full barley malt serving as a control. The major attributes of the beer (alcohol content & flavor) were evaluated for each of the 50%, 62.5% and 75% substitutes from the three crops with reference to the control beer. The results showed that 75% substitution of barley malt with Maize and Enset starch is promising in the beer production.

Beers and beer-like beverages may be prepared from rawcereal grains, malted cereal grains and (historically) bread. The roots of beer production go back much farther to the first agrarian societies[6]. They used a variety of grains called emmer (Triticum dicoccum), which was dehusked and baked to give flat bread. The flat breads were soaked in water and then allowed to ferment spontaneously through the action of wild yeasts. The Babylonians developed the art of brewing further, in which the emmer and barley content as well as the strength of the beer were closely regulated [4].

The Egyptians refined more the art of beer brewing and the legal requirements. They made the grains germinate and eliminated the soaked pieces of bread by sieving. From the seventh century, malting and brewing processes were researched with great experimental zeal, mainly in German monasteries. In the following centuries, brewing and dispensing rights were loaned out to several monasteries. It was also the monks who first used hops as a flavoring agent. Until the sixteenth century, only the spontaneous top fermentation, which occurs at higher temperature, was known; later, bottom fermentation also was discovered [1].The secondary starch sources being often termed as adjuncts, especially used as a lower cost substitute for malted barley. In this context, obtaining part of the starch by the addition of other starch-containing raw materials (other sources of extract) of brewing adjuncts to partially substitute malt is becoming a standard procedure. Thus, the brewer needs to ensure that wort prepared from mixed grist’s of malt and adjuncts does not diminish the traditionally high quality standards [5].Starch-rich adjuncts are usually considered non-malt sources of extractable carbohydrate, which typically do not contribute to either enzyme activity or soluble nitrogen [5].

The amount of these adjuncts used is varying widely from 10 to 30% in Europe, to 40 to 50% for some US brewers, to as high as 50 to 75% in certain African countries [2]. However, in certain countries, for example Germany, malt is the only permitted source of fermentable extract because of the German purity law or "Reinheitsgebot"[4].

The increased price of barley malt, low production rate of beer barley due to environmental factors and adulteration of this barley with food barley which is high in beta-glucan have negative consequences for Ethiopian brewing industries. The impact of all these changes forced brewing industries to take into account selected crops as partial substitute of barely malt[8].

Therefore, this article focuses to minimize the costs of brewing industries without changing the quality of the beer by using fermentable starch crops as partial substitute for barley malt which are widely available in Ethiopia.

The production of beverages from malted grain, notably beer, involves many unit operations performed sequentially. The main stages include malting, wort production, fermentation and conditioning (maturation). Each of these operations is followed by a separation stage. In beer making, the wort separation stage which follows mashing is regarded as the most critical and most difficult [3]. Adjuncts can either be added to the cereal cooker, the mash tun or directly to the brew kettle[8].

Cooker mash adjuncts consist of non-gelatinized cereal products (meal, grits, flour, or dry starch) whose starches are in their native forms. A non-gelatinized adjunct needs to be heated in a separate cereal cooker to complete liquefaction since the starch gelatinization temperature of the adjunct is higher than that used for the malt saccharification (starch hydrolysis) temperature[8]. The cooked adjunct is then added directly to the mash in the mash tun. The malt enzymes from the malt mash can be used to hydrolyze the starch from the adjunct, converting it to sugars ready for fermentation [5]. 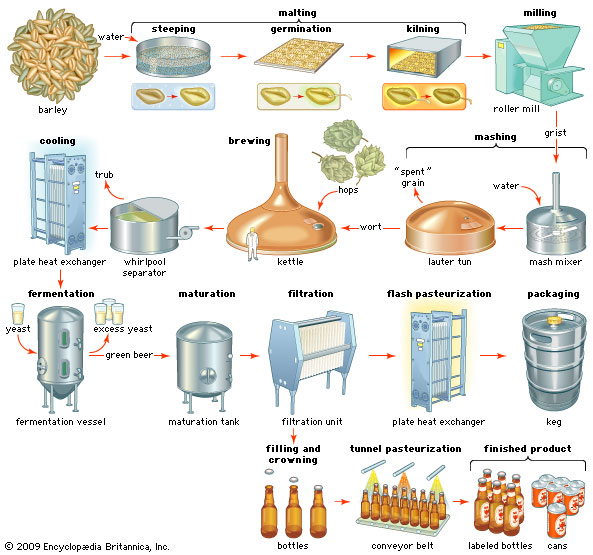 The main purposes of malting are the development of enzymes (amylolytic enzymes that hydrolyze the starchy endosperm of the barley grain into soluble sugars) in the grain with simultaneous degradation of high molecular substances in the cell walls (modification), the achievement of a distinctive character by color and aroma compounds, and removal of undesired aroma compounds [9]

Steeping: To initiate malting it is hydrated. This is achieved by `steeping', immersing the grain in water or `steep liquor'. Later, spraying or `sprinkling' the grain may increase the moisture content.

Germination: The purpose is to produce a green malt of a definite composition and this is where enzymatic activity starts which allows the starch to be converted to simpler sugars[11].

Kilning: In order to stop the chemical and biological transformations that have take place during germination the green malt is dried by kilning[9].

Wort production: To provide the necessary condition for this, the initially insoluble components in the malt must be converted in to soluble products, and in particular soluble fermentable sugars must be produced. The formation and dissolving of these compounds is the purpose of wort production[8].

Milling; once the ingredients are in the brew house they are milled using a roller mill that is often specially designed for a specific brewery based on the type of equipment being used, in which it is ground to a suitable size.

Mashing: mashing is the process of converting starch from the milled barley malt and added adjuncts into fermentable and unfermentable sugars to produce wort of the desired composition[10].

Wort boiling and hops addition: wort boiling is performed in the wort kettle, which is equipped with every thing needed for vigorous thorough boiling. the end product of wort boiling is the casting wort, i.e. is the hot finished wort[6].

Fermentation: Wort is a highly complex medium consisting of fermentable sugars (fructose, sucrose, glucose, maltose and maltotriose), dextrins, nitrogenous materials, vitamins, ions, mineral salts, trace elements, and many other constituents. Once the wort is cooled it can be fermented [7].

Final beers were analysed for a range of key quality parameters: saccharification time, iodine test, alcohol content, original extract, real and apparent degree of fermentation and those were measured directly by instruments are reported. For a normal beer, the parameters were conforming to the quality standards of beer. The values are also in line with the values of the ASBC standard (ASBC, 1999., EBC, 1998).

For all the three starches (potato, enset, maize) in the three starch-malt compositions (50 %, 62.5 %, and 75 %), the saccharification time was normal (10 to 20 min).This showed that malt usually contains an excess of amylolytic enzymes, so up to 75% of the malt can be replaced with a starch fraction at the mashing step without the need to add enzymes.

In this study the use of starches from selected crops (Maize, Enset, and Potato) as partial substitutes for barley malt was found to be promising to develop beer product. The production of beer from the three types of starch sources gave good yield of extract content. Maize was found to produce the highest yield of extract from the three crop types. It is also better in alcohol content, flavor, lautering & saccharification time than others. Enset has been found to be the second important starch source that has a potential application in breweries. It has generally good yield of extract, alcohol content and flavor, however performed poor in lautering time at 75% substitute relative to others.

It is recommendable to further study on possibility for improvement and prediction for utilization of starch crops for value-added products like beer for economic and technological development.