Abstract: Organochlorine pesticides (OCPs, including DDTs and HCHs) and polychlorinated biphenyls (PCBs) were detected in 64 human breast milk samples collected from lactating mothers living in three communes and two wards in the suburbs of Hue city, Central Vietnam in 2010 and in 2011. Assessment of health risk for breast fed babies was conducted, basing on estimation of estimated daily intake (EDI) of the pollutants (OCPs and PCBs) by the babies and then comparing with tolerable daily intake (according to the guideline of Canada Health Agency). The results obtained showed that the EDIs were much lower than the TDIs.

Diclodiphenyltricloetans (DDTs) and hexacloxyclohexans (HCHs) were two of the widely-used organochlorine pesticides (OCPs) in Vietnam since 1960s. The OPCs and polychlorinated biphenyls (PCBs) (used as transformer oil) belong to 12 persistent organic pollutants (POPs), which are the most dangerous chemicals for environment and human health (Polder A., 2009; Sudaryanto A., 2006, Devanathan G, 2009). For recent years, many places of remains of use-prohibited and/or use-expiry date OCPs were found in many provinces/cities in Vietnam. 28 sites of pesticides remains were found in the rural and urban areas in Hue city of Thua Thien Hue province in 2004. The remains of pesticides estimated was 3,140 kg, of which OCPs, phosphorous pesticides and others occupied 17%, 18% and 65%, respectively (Hung N.V., 2005). OCPs and PCBs collection and treatment after use-expiry date in Vietnam was not tightly regulated and controled. These raised much concern about scatter of the OCPs and PCBs into environment (water, soil, sediment and air) and adverse effect on human health. A study on the levels of DDTs and HCHs in soil samples collected in distance of 50 – 100 m from the OCPs remain sites showed that (Hung N.V., 2005): i) DDTs level in the 14 of 20 soil samples were higher than the requirement of Vietnam regulation TCVN 5941-1995 (100 ppb): in the range of 120 – 470 ppb; ii) HCHs levels in the 12 of 20 soil samples were higher than that of the regulation (100 ppb): in the range of 110 – 500 ppb.

The researches on the OPCs in Tam Giang – Cau Hai lagoon in Thua Thien Hue province, a biggest lagoon in South East Asia, going along the sea with the area of 22,000 ha and receiving river waters from the land and sea water through two inlets (Thuan An and Tu Hien inlets), showed that:

The high levels of OCPs in the lagoon sediment are likely to be adversely affecting the ecosystem, human health via food chains and the quality and productivity of aquatic biota in the lagoon. High bioaccumulation of DDTs in several benthic species was found in the period 1998 to 2001 in rabbitfish (mean ± S = 179 ± 52 ppb; n = 25) and local carp (286 ± 82 ppb; n =  25) collected in the Tam Giang – Cau Hai lagoon. The levels of DDTs and HCHs found in bivalve (Meretrix meretrix) collected from Thuan An area in the lagoon were in the range of 34 – 53 ppb and 5 – 7 ppb, respectively (Sy H.T., 2008). Although these were preliminary studies only, there should certainly be concerns about the quality of aquatic products as well as the human health implications of consuming them.

As use of OCPs in agriculture has been prohibited in Vietnam since 1995, a decreasing trend in the OCPs level in the lagoon water and sediment can be observed from the above data: decrease in DDTs level from 9.8 - 33.4 ppb in 2001 down to 0.2 – 8.2 ppb in 2005. In spite of that, DDTs are still being used for malaria prevention and illegally for agricultural purposes by many local farmers due to entrenched habits and the high effectiveness of DDTs. As such, concerns about the adverse effects on organisms and human health remain.

There were many researches on assessing the accumulation of OCPs and PCBs in environment as well as the analyzing and evaluating their presence in breast milk with the aim at defining the origin of morbidity and fatality in human by these chemicals. However, the study on this problem is still a few in Vietnam generally and in Hue city particularly. This study was conducted with the aim of assessing levels of DDTs (p,p'-DDE; o,p'-DDT and p,p' DDT), HCHs (-HCH, -HCH and -HCH) and PCBs (PCB 28, 52, 101, 118, 138, 153 and 180) in breast milk collected from lactating mothers in the suburbs of Hue city.

Sample extraction was conducted as follows (Minh N.H., 2004; Raab U., 2008, Beyer A., 2010): 10 g of the breast milk sample was added onto 10 g pre-cleaned diatomite earth (Merck, Damstadt, Germany) packed in a glass column and then chemicals to be analyzed were extracted with 200 mL diethyl ether at a flow rate of 1 mL/min. The extract was concentrated to 8 mL by vacuum evaporator. One-fifth of the concentrated extract was used for fat content determination by gravimetric method. The remaining extract was purified on chromatogaphic mini-column packed with 2 g activated florisil (Florisil 30 – 60 mesg, Sigma – Aldrich, USA) and 1 cm length of activated anhydrous sodium sulfate (Merck, Germany) top side. The lipid in the purified-extract was removed by concentrated sulfuric acid treatment (Merck, Germany). The lipid-removed extract was evaporated to 1 mL under a gentle stream of nitrogen and was ready for gas chromatographic analysis.

• 0.5 - 100 ppb multi-level calibration curves of the OCPs and PCBs were created for quantification with good linearity (r > 0.99); 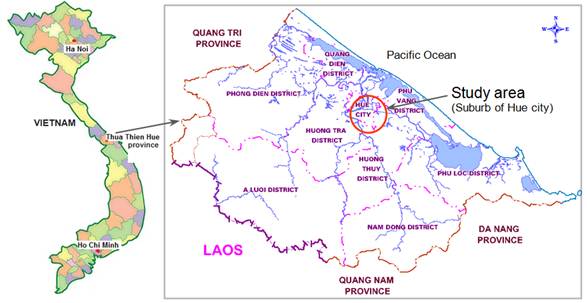 The results of analysis of OCPs and PCBs in the breast milk samples showed in Table 1 and Table 2.

Table 1. Levels (ng/g lipid) of OCPs and PCBs in the human breast milk samples in three communes in the suburb area of Hue city in 2010(*).

Table 2. Levels (ng/g lipid) of OCPs and PCBs in the human breast milk samples in two wards in the suburb area of Hue city in 2011(*).

The data of OCPs and PCBs found in Hue city (this study) were compared with that in Hanoi and Hochiminh cities (Minh N.H., 2004) as indicated in Figure 1.

For assessing health risk for breast fed babies, estimated daily intake (EDI) of the pollutants (OCPs and PCBs) by babies was estimated and then compared with tolerable daily intake (TDI) according to the guideline of Canada Health Agency (Oostdam, 1999). The EDI was calculated according to fomulas (1), accepting that weight of each baby was 5 kg on average and each baby consumed 700 g breast milk per day (Oostdam, 1999; Minh N. H., 2004; Sudaryanto A., 2006):

The data of average EDIs of OCPs and PCBs for breast fed babies in the study areas showed in Table 3 were rather lower than the TDIs.

Although OCPs were prohibited for agricultural use since 1995 and transform oils containing PCBs were collected and controled in Vietnam, the pollutants were detected in most of human breast milk samples collected from lactating mothers in the suburbs of Hue city in 2010 and 2011. Generally, the levels of DDTs was higher than the levels of HCHs and PCBs in the samples. In spite of that, the EDIs of the pollutants indicated that there was not much concern about the health risk for breast fed babies in the area under study.