Abstract: In some parts of Tanzania, fluoride ion concentrations in potable water are higher than recommended by WHO. Consequently, searches for economically and technically viable strategies are required to address this problem. This work aims to determine the potential of phosphate rock mined from Minjingu area in Northern Tanzania as water de-fluoridatant. The results obtained are reported herein. The rock particles were chemically activated and then characterised by XRF, XRD and nitrogen physisorption. Results showed that the main component of chemically activated rock particles was calcium hydroxyapatite with Ca/P ratio of 1.55 whereas the main component of non-activated particles was calcium fluoroapatite (Ca/P ratio of 1.66). The results also indicated that activated rock material was mesoporous with a BET surface area of 57.4 m2/g. Results for water defluoridation showed that the material had a fluoride ion percentage removal of about 90%, when the adsorbent dose was 8 g, contact time of 30 minutes, initial fluoride ion concentration 5 mg/L, pH values of 6.0 to 7.2 and batch volume of 50 mL. The material could be regenerated using 1% NaOH and reused in the water defluoridation process. Therefore, Minjingu Phosphate Rock (MPR) is potential water de-fluoridatant.

People obtain water from various sources including rain, surface water (lakes, rivers and ponds) and groundwater (boreholes, springs). As reported elsewhere [1], groundwater is the main source of water in Tanzanian rural areas especially in Dodoma, Arusha, Shinyanga, Kilimanjaro, Singida, and recently in the city of Dar es Salaam. It is well known that groundwater contains dissolved gases and minerals, including fluoride salts. Some parts of the earth’s crust contain minerals with high levels of fluoride ion. When groundwater is in contact with these minerals, soluble fluoride salts dissolve, thus releasing fluoride ions in water [2].

Fluoride in potable water (water for food preparation and drinking) can either be advantageous or disadvantageous to human health depending on its concentration level. In areas where the levels of fluoride ion in water is less than 1.5 mg/L, potable water is fluoridated to the level that prevents tooth decay, and is recommended by WHO [3,4]. However, fluoride concentrations ranging from 1.5 – 10 mg/L may cause either dental, skeletal or crippling fluorosis [5]. Many people from rural areas in Arusha, Kilimanjaro, Singida and Shinyanga use water with fluoride ions concentrations greater than 1.5 mg/L for drinking and food preparation [6,7]. It is reported in the literature [8] that fluoride concentrations in groundwater from some parts of Tanzania may be up to 17 mg/L (Shinyanga), 21.3 mg/L (Singida), 32 mg/L (Arusha) and 46 mg/L (Manyara). It was also reported elsewhere that 87.4% of children aged between 9 and 13 at Maji ya Chai – Meru, Tanzania were found to have severe dental and skeletal fluorosis [7].

A number of defluoridation methods have been tested at the Ngurdoto Defluoridation Research Station (NDRS) in Arusha and elsewhere. The well-studied defluoridation methods using adsorbent materials and precipitation include Nalgonda, activated clay, activated alumina and bone char [1,7,9,10,11]. Each of these defluoridation techniques have one or more setbacks including the need for high chemical doses, large amounts of sludge, not locally available in Tanzania, slow and low fluoride removal and ethical rejections [8,11,15]. Other reported methods involve electrolytic techniques and ion exchange [16,17], which seems to be expensive to developing countries such as Tanzania. Defluoridation technique is required to have a modest investment, low maintenance cost, should use a simple design which can be operated by villagers and able to reduce fluoride content to acceptable levels. The use of phosphate rock in water defluoridation is one of the methods envisaged to meet these requirements, because calcium apatite is the major constituent of the phosphate rock. The challenge of using phosphate rock, however, is that it is obtained as impure calcium hydroxyapatite. Consequently, there is a need to activate the raw phosphate rock with the aim of dissociating carbonates and removing organic matter and halogens, as well as improving porosity. Therefore, as a strategy in providing defluoridated water at affordable costs, it is proposed in this study to use the activated Minjingu phosphate rock for water defluoridation.

MPR was crushed into powder and washed with distilled water. The air dried MPR was sifted via number BS 410 sieve with aperture size of 0.2 mm. The activation process involved chemical and thermal activation. One portion of MPR powder (100 g) was left as non-activated MPR (naMPR). The second portion (100 g) was chemically activated (caMPR) by soaking in 1 L of 1% NaOH and agitated using Digital Grant Bio Shaker HY-51 machine overnight, and then washed thoroughly with distilled water before air drying. The third portion was thermally activated (taMPR) in a muffle furnace (model F46120CM) at a temperature of 800°C for 120 minutes then left to cool. The fourth portion was thermally activated as for portion three followed by chemical activation as for portion two (tcaMPR). The fifth portion was chemically activated as portion two followed by thermal activation as for portion three (ctaMPR). Finally all samples were stored in a desiccator.

X-Ray Diffraction (XRD) patterns were obtained using InXiTU Material diffractometer (model BTX 231) connected to a Lap top computer (model HP 530) which was installed with InXiTU BTX Interface software. In a typical procedure MPR was ground to a powder with particle size less than 150 µm and packed into an aluminium holder, which was then placed in goniometer and bombarded with X-rays generated from cobalt tubes. The XRD was operated at 30.3 kV, 30 mA and 2ϴ range from 5° - 54°.

X-Ray Fluorescence (XRF) investigations of activated and non-activated MPR were carried out using Bruker XRF Spectrometer (Model S8 Tiger). In a typical procedure the samples were crushed and ground into a fine powder. The powdered samples were then compressed under a pressure of 200 kN to form circular pellets with a diameter of 34 mm. The tablets were placed in aluminium cups, and the cups were placed in the XRF spectrometer. Boric acid was used for holding and labeling the pellets. The pellets were then qualitatively and quantitatively measured and analyzed to determine the elemental and percentage composition of chemically activated and non-activated MPR.

Two fluoride electrodes were used to analyse fluoride in the water samples. One of the electrodes was a fluoride-sensing radiometer F1 052 while the second was a single-junction reference electrode, with sleeve type diaphragm connected to a jenway potentiometer (Ion meter model 3205). Reference standards were made from serial dilutions of a stock solution of sodium fluoride (NaF) 1000 mg/L. A stock solution of sodium fluoride (NaF) 1000 mg/L was prepared by measuring 2.210 g of NaF and dissolved in 1 L of distilled water. Total Ion Strength Adjusting Buffer (TISAB II) solution was prepared by mixing 4 g of cyclohexylenediaminetetraacetic acid (CDTA) with glacial acetic acid (60 mL) and NaOH (58 g) in distilled water (500 mL), and pH adjusted to between 5.3 and 5.5 pH by adding 5 M NaOH solution drop wise followed by dilution to 1 L with distilled water. A water sample of 15 mL was transferred into a plastic container by means of a pipette followed by 15 mL of TISAB II. The electrodes were immersed into the sample and the concentration of fluoride ions was recorded. The measurements were performed in triplicate.

To determine the influence of MPR activation method on water defluoridation, batch adsorption experiments were carried out overnight using a dosa of 2 g of each non-activated and activated MPR in 50 mL of fluoridated water with an initial fluoride concentration of 5 mg/L. The agitation was done using Digital Grant Bio Shaker HY-51 machine. The samples were then filtered using a Whatman filter paper No. 41. The residues were kept aside and the filtrates were analyzed using fluoride ion selective electrode method to establish the percentage removal of fluoride ions. The activation method that gives an optimum defluoridation was then determined.

To find minimum amount of adsorbent giving optimum defluoridation, the best activated MPR was used in batch adsorption experiments to determine the efficacy of the different masses in removing fluoride ions from water. The selected masses in g of activated MPR were: 0.5, 1, 2, 4, 6, 8, 10 and 12. Each mass of the activated MPR was mixed with 50 mL of water containing initial fluoride ion concentration of 5 mg/L in a plastic container. The content in the plastic container were agitated (120 min), filtered and fluoride ion concentration determination was performed as stated previously. The minimum amount of activated MPR giving optimum defluoridation was then determined.

To determine the minimun effective contant time, batch adsorption experiments were carried out using 9 plastic bottles each containing 50 mL of water with initial fluoride ions of 5 mg/L. About 8 g of the activated MPR were transferred into each of the plastic containers. Contact times tested were 5, 10, 15, 30, 45, 60, 75, 90 and 105 minutes. The remaining treatments to the contents in the plastic containers were as before.

The effect of initial fluoride ion concentration was also determined by batch adsorption experiments at fixed contact time (30 minutes), fixed amount of adsorbent (8 g) and at different initial fluoride ion concentration ranging from 4.0-60.0 mg/L. The remaining treatments to the contents in the plastic containers were kept identical to previous experiments.

The effect of pH was found following the same procedure at fixed contact time (30 minutes), fixed amount of adsorbent (8 g), fixed initial fluoride ion concentration 5 mg/L, but pH was of fluoridated water was varied from 6 to 9 using HCl and NaOH solutions. The effective pH giving optimum defluoridation was then recorded.

The XRF results in Table 1 show that, naMPR and caMPR had CaO and P2O5 in higher percentage weight values. The ratio of Ca/P is 1.66 and 1.55 for naMPR and caMPR, respectively, whereas the Ca/P ratio in taMPR was 1.20. It is also revealed in Table 1 that naMPR, taMPR and caMPR contain SiO2, MgO and Al2O3, Fe2O3 also in slightly high percentage weight. Fluorine ion was not detected in XRF analysis because the Bruker XRF Spectrometer (Model S8 Tiger) can not measure the abundances of oxides of elements with atomic number less than 11. 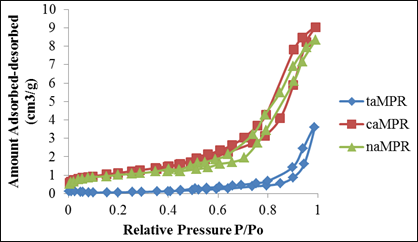 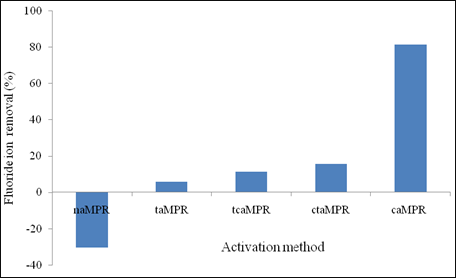 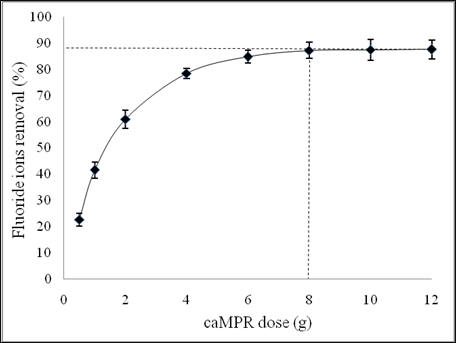 After finding out the best MPR activation method and the smallest adsorbent amount, it was of the essence to find out the shortest contact time for fluoride ions uptake. Figure 6 shows the defluoridation results using 8 g of the caMPR. 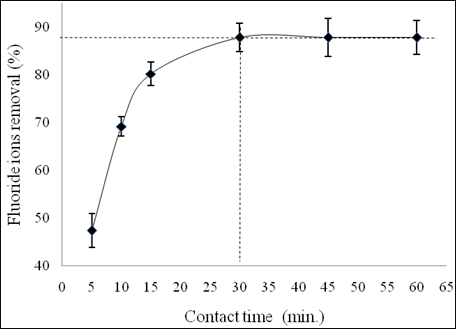 From Figure 6 one can conclude that 30 min is shortest contact time required for optimum fluoride ions removal. 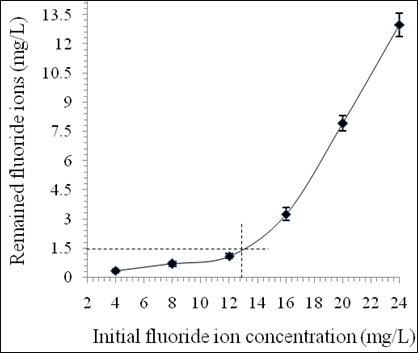 Results for the influence of pH are shown in Figure 8. No significant change in fluoride ion removal at pH range from 6.0 to 7.2, however, there was a decrease in the extent of fluoride ions removal with increase in pH above 7.2 (Figure 8). 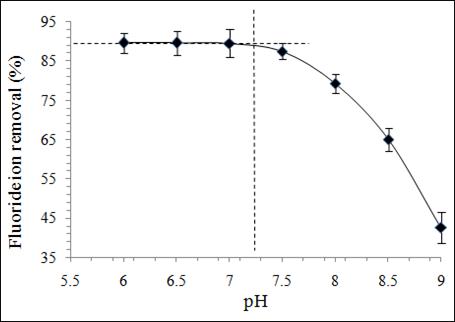 The environmental concern regarding production of sludge was also considered by testing the regeneration of an effective adsorbent from fluoride ion saturated caMPR. Figure 9 shows number of cycles of regeneration and the reuse of the regenerated caMPR. It is revealed from this figure that for cycles tested high fluoride removal was maintained. 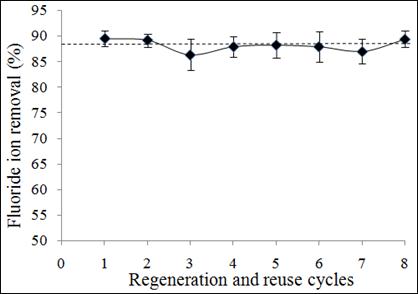 The major chemical components of the non-activated and activated MPR are CaO, P2O5 and SiO2. The main mineralogical components in non-activated MPR are fluoroapatite (Ca10(PO4)6F2) and quartz (SiO2) whereas the caMPR mainly contain apatites (Ca10(PO4)6(OH)2, Ca10(PO4)6F2) and quartz (SiO2). The caMPR and taMPR are mesoporous materials with type IV isotherms and hysteresis loop type H3. Moreover caMPR has BET surface area of 57.4 m2 which may be a factor for its effective fluoride ions adsorption. The minimum contact time required for optimum fluoride ion uptake by caMPR adsorption was found to be 30 minutes. The caMPR material is effective in defluoridating water to WHO recommended levels up to initial fluoride concentration of 12.4 mg/L in a pH range from 6 to 7.2. A saturated caMPR material can be regenerated using 1% NaOH and reused several times. It can thus be concluded that the caMPR can serve as alternative adsorbent for the removal of fluoride ions from fluoridated water.