Abstract: Tower crane belongs to tall towers truss structures, whose bucking instability often lead to collapse. Past studies focused on the mast instability under a single load, which doesn’t apply to the actual condition that tower crane working under various loads at the same time. This paper taking into consideration the tower crane lifting weight as well as various loads like the hoist tipping moment, heavy vertical load, wind load, the centrifugal force, rotary load of resistance and horizontal inertia force. Through the eigenvalue bucking and nonlinear bucking analysis, we can get the lifting load when the hoisting is focusing on a maximum working range of the arm of the tower and tower bar force status and the convergence map of stability. This study provides the complete steps of the tower stability design of tower crane, can be used as a guidance or reference for the actual product design.

The truss tower is the main supporting structure of the tower crane, whose loading condition is quite complicated, and analyzing its working condition is sincerely difficult. Under the influence of various loads like the hoist tipping moment, heavy vertical load, wind load, the centrifugal force, rotary load of resistance and horizontal inertia force, it will produce the immense stress and deformation much easier. As a towering truss structure, it's necessary to analyze its stability. With the frequent accidents of tower crane, studying in this area recently attracted the attention of researchers, [1-5] studied the stability problem of two bar truss, [6-9] studied the factors that affect the truss structure of local stability, [10] studied instability of the mast tower crane in static load without wind, under the condition of changing the amplitude of the loading, [11-13] studied the stability of the tower in turbulent winds.

The tower crane in this paper, for instance, with the engineering software ANSYS to simulate the actual operations under the five most dangerous working condition [14-18], our paper conducts linear bucking and nonlinear buckling analysis respectively [19-27], Assuming that the tower crane was working in the most dangerous working condition. Continuously changing the weight and the range of loads to obtain the precise tower crane buckling critical loads, in order to get the convergence map of stability, because the past papers studying in this field was rare and not enough, on one hand, the research what we studying was of significance, on the other hand, It provides useful basis data for tower crane design in order to guarantee the stability of the crane.

Whether the finite element model is reasonable or not directly affects the accuracy of the analysis results, To make the mast model reasonable, the finite element model should be able to reflect the characteristics of the tower body structure; loading and constraints of the model should be consistent with the practical engineering situation. Tower structure entities and loading should be consistent with the real situation. Taking into consideration of the larger structural stiffness at the bottom of the tower, this study assumed fixed bearing, to be able to withstand the bending moment. 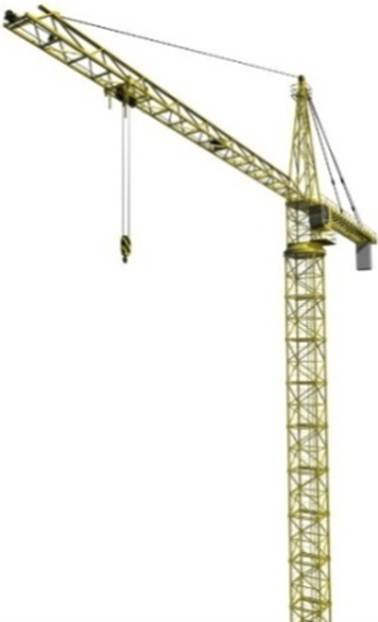 The QTZ25 tower crane is taken as an example to model and conduct buckling analysis. As is shown in Figure 1, the tower crane working range is from 2.5m to 35m, the maximum weight is 2.5t, the nominal weight at the most significant is 0.75t; the main chord is a tube with 100mm outer diameter cross-section and 10mm thickness; all the abdominal rod are tubes with 100 outer diameter cross-section and 5mmthickness; tower bar material is Q235b, luffing speed 20m/min, rotation speed 0.6r/min, hoisting speed 13.5/27m/min.

The tower model building process used the command stream. Firstly, we defined the key points on the standard section, connecting points to form the main chord, ventral pole, and divided it into fine mesh. Then we defined the element type and material properties. Considering the structure characteristic and the load of mast tower crane, the BEAM189 space beam is introduced to make the element simulation analysis. This unit is a beam that can bear pulling, pressuring, bending, twisting, furthermore, with the consideration of the shear deformation of Timoshenko beam element, in unit BEAM189 cross-section rotation and torsion can be in the independent interpolation. This unit can also be used with the cross-section defined command, which is a convenient, fast, and accurate way to define the section size. When the tower crane lifting the rated load, the tower main chord should withstand large tensile and compressive stress, so the tower bar material is selected as Q345b, modulus of elasticity 2.1×105 MPa, Poisson's ratio is 0.3, density is 7800 kg/m3.

Taking into account the characteristics of tower cranes, tower suffers loads, including wind load, weight of the tower, centrifugal force, tipping moment, torque and vertical loads generated by the goods, balance weight and balance boom in the tower body. This paper selects four kinds of potentially most dangerous load condition and performed eigenvalue bucking and nonlinear bucking analysis to mast. What these conditions have in common is that the car is located in the maximum working range of hoists, vertical self weight load remains unchanged, by increasing the goods hoist until it reaches the tower yield limit load on the tower. The differences among the conditions are listed in table 1 and later contents, namely different directions of the wind force, whether to consider various parts of the rotary inertia and centrifugal force, etc. These conditions accurately descript the tower crane stability analysis of the changing of hoisting load and the unchanging rest of the actual load, making the stability analysis reflects the real situation and has practical value. For comparison, the calculation condition commonly used in other documents and results of analysis are listed as below.

The five load conditions are as fellow and shown in Figure 2.

1) The arm located on the cross-sectional diagonal line of tower body does not move, lifting goods, wind direction by the balance of the boom to boom.

3) The tower arm is parallelled to the two sides of the cross-section of the tower does not move, lifting goods, wind direction by the balance of the boom to boom.

4) The tower arm is parallelled to the two sides of the cross-section of the tower rotation starting and braking, hanging rated lifting load, consistent with the rotary inertia force winds.

5) The tower arm located on the cross-sectional diagonal line, there is in no wind, static load conditions, which is commonly used conventional calculation.

Table 1. The calculation condition and the equivalent loads.

In table 1, the symbol "↑" indicates that the load increases with the hoist. Good load

can get the vertical loads at the top nodes of the tower.

The goods, the weight of crane trolley, the arm center of gravity, balance arm focus and arm frame beat face form to rotary center distance of heart are respectively

and the tower width a, by the cargo load

can solve the equivalent force of bending.

, the tangential inertial force of boom

, and arm frame of wind load

From the above components quality

and centroid to the level of the rotary center distance

, centrifugal force can be obtained.

The wind pressure of working status

, led to the tower wind load of each standard section.

With QTZ25 tower crane parameters in above all, the equivalent load data are shown in table 1.

. For any known initial stress state, after a solving for the geometric stiffness matrix

, with application of the load factor

are not a displacement function, the equilibrium equation is,

Assuming a critical state has been reached, then there exists a perturbations of configuration

, so that the system is in equilibrium state under the same external force, then,

Subtracting the above two equations,

and the displacement eigenvectors

. When the resulting eigenvalue

does not equal to 1, continue to adjust goods load, until the eigenvalue

was equaled to 1. ANSYS analysis and calculation results as is shown in table 2.

Shown in the above five kinds of load cases, case 1 eigenvalue buckling load is the minimum, but the most vulnerable to instability. The linear buckling analysis characteristic value of minimum buckling load 100N is 10 times more than dynamic allowed maximum lifting load

The nonlinear analysis and calculation applied the bilinear isotropic hardening BISO model and the isotropic strengthening Von Mises yield criterion, while opening the large deformation, using the load increment method to progressively load, the arc-length method to calculate in the iterative process, with default convergence conditions. ANSYS analysis reports buckling convergence Figure, convergent Figure’s horizontal axis is cumulative iteration number, the vertical axis is absolute convergence norm. Convergence control is associated with L2 norm: L2 value is constantly changing during the calculation; if the L2 is not greater than the tolerance CRIT, then converge.

. For all load cases in Table 1, with hoists of the car located in the maximum working range, ANSYS worked out the non-linear convergence of tower critical loads under five dangerous load conditions are respectively 40kN, 64kN, 50kN, 81kN, 68kN. Case 1 has the minimum critical load. As the load gradually adds to 40kN, reaching the material buckling strength, further increment of load results in convergence map does not converge and the deformation of the tower crane. ANSYS analysis does not provide corresponding stress cloud figure. Mast tower crane nonlinear convergence map and stress cloud shown in Figure 3.

Figure 3. Diagrams of nonlinear convergence and the tower stress cloud.

(1) This paper is focusing on the working properties of tower crane, using the load conditions of design specifications and considering all loads, with an increasing hoist load, analyzing the characteristics of tower crane, linear eigenvalue buckling and material nonlinear buckling on the high-rise tower truss structure based on the space frame model. The results show that chord is most likely to experience instability, while the critical load from nonlinear buckling analysis is much smaller than the critical load from eigenvalue buckling analysis.