Stochastic Modelling of the Transmission Dynamics of Measles with Vaccination Control

In this chapter we discuss mathematical modelling, types of models and use of models.

Modelling is the process of producing a model; a model is the presentation of the construction and working of some system of interest. It is similar to but simpler than the system it represents. Mathematical modelling is the process of expressing real world phenomena or system using mathematical principles and formula. Mathematical Modelling can classified into deterministic models and stochastic models based on certainty. In this study we will study stochastic model of dynamics of measles with vaccination by simulation of the transformed deterministic model into stochastic differential equations model.

Measles (also called rubeola) is a highly contagious viral infection that can be found around the world through person-to-person transmission mode, with over 90% attack rate among susceptible persons. The measles virus is a paramyxovirus, genus morbillivirus. Even though an effective vaccine is available and widely used, measles continues to occur even in developed countries. Children under five years are most at risk.

The main symptoms of measles are fever, runny nose, cough and a rash all over the body, it also produces characteristics-red rash and can lead to serious and fatal complications including pneumonia, diarrhea and encephalitis. Many infected children subsequently suffer blindness, deafness or impaired vision. Measles confer lifelong immunity from further attacks [15].

Measles is a highly contagious virus that lives in the nose and throat mucus of an infected person. It can spread to others through coughing and sneezing. Also, measles virus can live for up to two hours in an airspace where the infected person coughed or sneezed. If other people breathe the contaminated air or touch the infected surface, then touch their eyes, noses, or mouths, they can become infected. Measles is so contagious that if one person has it, 90% of the people close to that person who are not immune will also become infected. Infected people can spread measles to others from four days before through four days after the rash appears. Measles is a disease of humans; measles virus is not spread by any other animal species.

There is no specific treatment for measles. People with measles need bed rest, fluids, and control of fever. Patients with complications may need treatment specific to their problem.

In the work [18] performed a mathematical model of measles with vaccination and two phases of infectiousness. They followed the SIR modeling approach hence they partitioned the total population is into Susceptible, Infectious and Recovered compartments. Their study realized that the disease will certainly be eliminated if all susceptible are vaccinated. Achieving a 100% vaccination coverage is impractical but if the goal is set to 100% then we just might hit the ≥94% vaccine coverage which is the herd immunity for measles. Since measles is predominantly found among children aged 5 years and below, they therefore suggested that the measles vaccine should be made compulsory such that no child is allowed to enter school without evidence of at least two dose measles vaccination.

In the work [12] performed a deterministic mathematical model for transmission dynamics of measles it shows that vaccination is an important control strategy for the transmission of this disease.

is a collection of random variables defined on a probability space, a stochastic process that is continuous in time

the associated pdf is denoted by

is a stochastic process which is continuous in time and in state, then

is a Markov Process if for any given sequence of times

, it is denoted by

and the transition pdf is denoted as

If we consider a random walk on the set

be DTMC for this random walk where

by using Taylor series expansion about the point

represents the pdf of the continuous time and state process

that satisfy the following partial differential equation which is also known as the forward kolmogorov equation:

When the random walk is unbiased or symmetric, the limiting stochastic process is known as Brownian motion where

The standard Brownian motion with

is also known as Wiener Process.

The assumptions on the limits in the random walk model were necessary to obtain the diffusion equation with drift. These assumptions are very important in obtaining the Kolmogorov Differential equationsm which are related to infinitesimal mean and variance of the process.

be a Markov Process with state space

having continuous sample paths and transition pdf given by

is a diffusion process if its pdf satisfy the following three assumptions in terms of the expectation:

The backward Kolmogorov Differential Equation for a time homogeneous process is

The forward Kolmogorov Differential Equation for a time homogeneous process is

is a solution of forward Kolmogorov equation and therefore, we can replace

, it follows from the forward Kolmogorov differential equation

A solution of a stochastic differential equation is a sample path of a diffusion process, if

Then, the sample path of the process

is a solution of the It

SDE in the form

is denoted by Wiener Process.

Then the differential equation is equivalent to the It

If the drift and diffusion coefficient are

, then we obtain the following diffusion equation

which is the solution of the pdf in wiener process

which is the pdf of normal distribution with mean zero and variance t.

is a solution of the following It

is a real valued function defined for

with continuous partial derivatives, then

In this chapter we discuss the modified SEIR model with control strategy of vaccination [12] in deterministic and its corresponding SDEs for measles transmission. Mathematical Models of Epidemics can be broadly classified into two main categories: deterministic models and stochastic models. These models often result into non-linear systems observed through partial noise data. After a deterministic system of ODEs has been formulated for the population dynamics it is possible to transform the system into various stochastic models such as DTMC, CTMC, MCMC, SDEs and others that take into account the uncertainties in the population.

3.1. Formulation of the Deterministic Mathematical Model

In this section we formulate a deterministic, compartmental mathematical model to describe the transmission dynamics of measles. We assume that the population is homogeneously mixing and reflects increasing dynamics such as birth and immigration, Per Capita birth rate is time constant, Per Capita natural mortality rate is time constant, individual can be infected through direct contact with an infectious individual, on recovery the individual obtains permanent infection-acquired immunity that is an individual cannot be infected again by measles and Individual who has attended first and second dose of vaccine consecutively receive permanent immunity to measles.

3.1.1. Description of Variables and Parameters

The following tables describe the variables and parameters used in our model:

Table 2. Variables used in the model.

Table 3. Parameters used in the model

The description of measles dynamics can be summarized by compartmental diagram below: 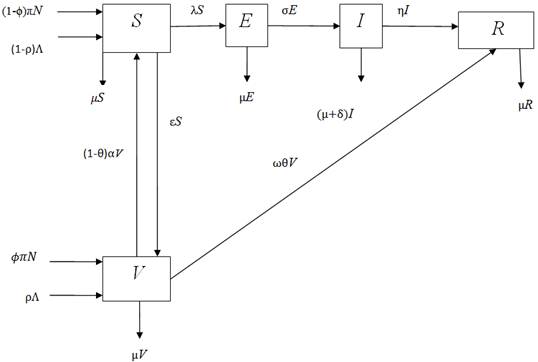 Figure 1. Compartmental Diagram of the Transmission Dynamics of Measles.

From the above explanation and compartmental diagram Figure 1, the transition between compartments can now be expressed by the following differential equations:

The above system of equations (1)-(5) can be simplified into:

is the force of infection given by

The total population size is:

Epidemiologists have always been interested in finding the basic reproduction number of an emerging disease because this threshold parameter can tell whether a disease will die out or persist in a population. Denoted by

, this parameter is arguably the most important quantity in infectious disease epidemiology. It is defined as the average number of new cases (infections) produced by a single infective when introduced into a susceptible population. It is one of the first quantities estimated for emerging infectious diseases in outbreak situations (Diekmann et al, 2009). It is a key epidemiological quantity, because it determines the size and duration of epidemics and is an important factor in determining targets for vaccination coverage (Grais et al, 2006). The basic reproduction number is sought after principally because:

< 1, then throughout the infectious period, each infective will produce less than one new infective on the average. This in turn implies that the disease will die out as the DFE is stable.

> 1, then throughout the infectious period, each infective will produce more than one new infective on the average. This in turn implies that the disease will persist as the DFE is unstable. In other words, there will be an outbreak.

can be determined, then the transmission parameters which will force

to be less than or greater than 1 can easily be identified and control measures effectively designed.

Next, we shall find the Basic Reproduction Number of the system using the next generation method [6] and we obtain the basic reproduction number denoted by

denote the number of individuals for

Thus we can have

, to transform the above deterministic model we need to compute the expectations

. The table below contains the possible changes of the process together with their associated transition probabilities.

Table 4. Possible changes of processes and their associated transition probabilities.

From the table above we formulate three systems of SDEs that have the same Forward Kolmogorov Differential equation and sample paths:

and the diffusion part

are computed by the following neglecting higher orders of

Thus computing from the table we obtain:

This is the same as the RHS of the deterministic model. 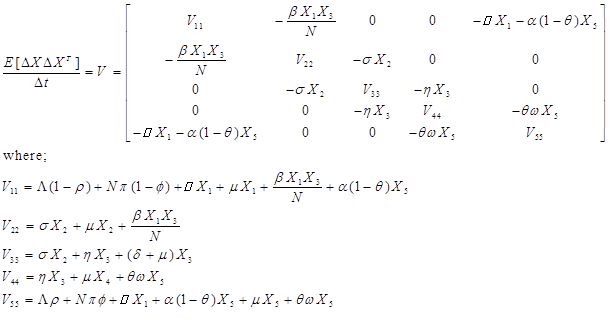 The resulting SDE is a multidimensional and multiplicative, hence it is hard to simulate. Also, the diffusion coefficient of the formed SDE is a square root of a matrix, that is

is a vector of thirteen (13) independent wiener processes

is hermitian (symmetric) and positive definite, cholesky decomposition can be applied obtain matrix

The diffusion matrix G is a 5×13 matrix of the form:

Column reduction can be performed on the matrix ∆X to obtain matrix H such that; 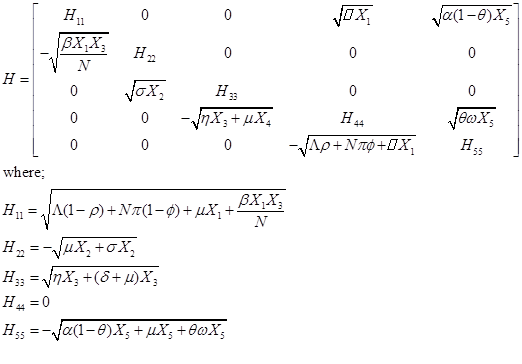 In this chapter we simulate the deterministic and stochastic models formulated.

thus we have the following system of non-linear equations: 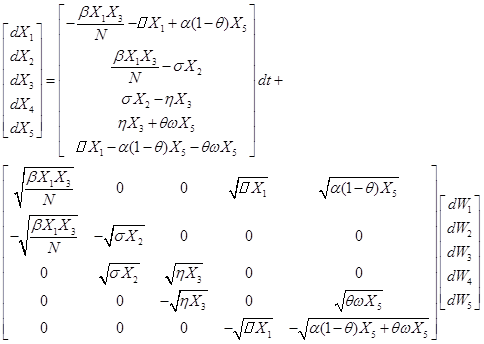 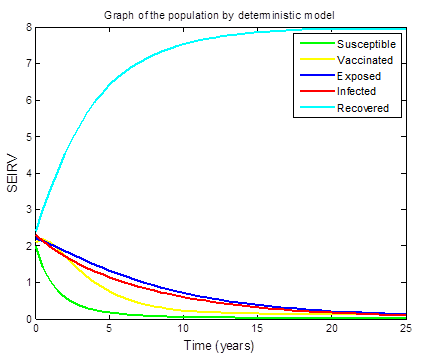 Figure 2. Graph of the population by deterministic model.

From Figure 2 we observe that individuals who have received first and second dose of vaccine and those who have been treated which comprise the recovered population in the sense that they can’t be infected is increasing hence the infectious disease is controlled in the population. 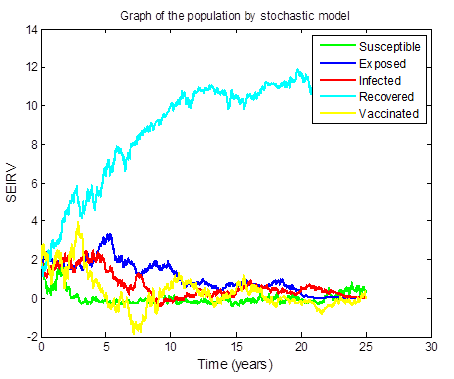 Figure 3. Graph of the population by stochastic model.

The Figure 3 shows that Susceptible population is decreasing while the exposed and infected ones are increasing from the beginning till a certain time, t where it starts decreasing to be zero. This means that vaccination is controlling the infectious disease and eradicated to die out from the population hence the recovered population is increasing. 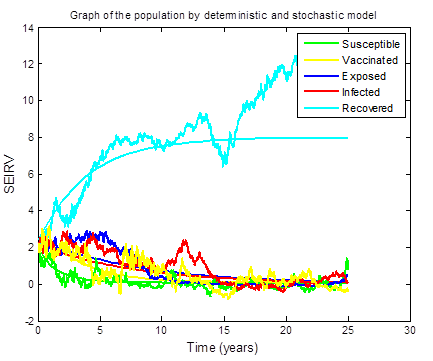 Figure 4. Graph of the population by deterministic and stochastic model. 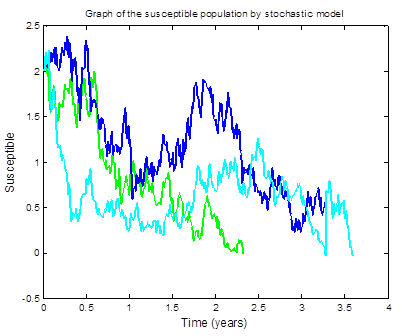 Figure 5. Graph of the susceptible population by stochastic model.

Figure 5 shows that the Susceptible population varies as time goes on but eventually decreases hence the disease is controlled in the population. 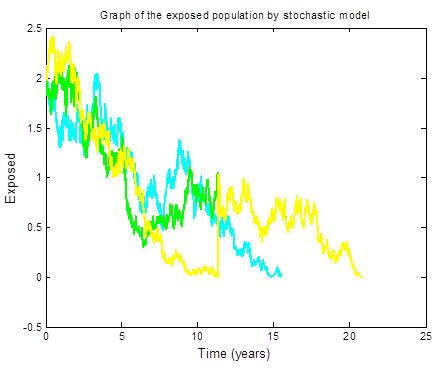 Figure 6. Graph of the exposed population by stochastic model.

Figure 6 shows that the exposed population is decreasing since vaccination is controlling the spread of the disease. 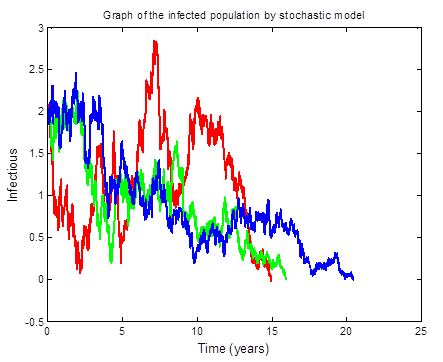 Figure 7. Graph of the infected population by stochastic model.

Figure 7 shows that the infectious population increasing and decreasing in the population till a certain time where it starts decreasing to be zero because of vaccination control strategy. 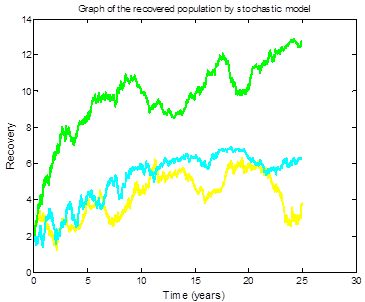 Figure 8. Graph of the recovered population by stochastic model. 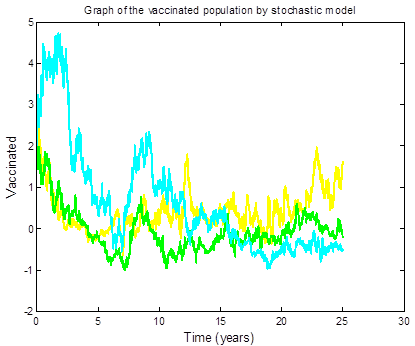 Figure 9. Graph of the vaccinated population by stochastic model.

Figure 9 shows that the variation of the vaccinated population

In this chapter we provide conclusion and recommendation of the project.

The study has shown the effectiveness of stochastic analysis in studying the dynamics of measles compared to deterministic analysis.

This study recommend the use of stochastic analysis in studying dynamics of infectious diseases.

Based on the model of this study, it is proposed that future work should consider the following:

i.    Application of other stochastic approaches such as Monte Carlo Markov Chains

ii.   Use of more accurate numerical schemes like Runge-kutta and others