Abstract: The N- dimensional radial Schrödinger equation with an extended Cornell potential is solved. The analytical exact iteration method (AEIM) is applied. The energy eigenvalues are calculated in the N –dimensional space. The charmonium meson, the bottomonium meson and the

meson masses are calculated in the N-dimensional space. The special cases are obtained from the general case. The study of the effect of dimensionality number is studied. The mean value of the radius and the mean square velocity of charmonium meson, bottomonium meson, and

meson are calculated. The present results are improved in comparison with other recent studies and are in good agreement with the experimental data. Therefore, the present method with the present potential gives successfully description of heavy quarkonium properties.

meson have a vital role for comprehension the quantitative tests of (QCD) and the standard model [1]. The study of these systems is very important. A lot of heavy quarkonium systems can be studied within the Schrödinger equation [2].

The solution of Schrödinger equation with spherically symmetric potential is one of the important problems in physics. It plays a large vital role for spectroscopy, atoms, molecules, and nuclei, in particular, the properties of constituents particles and dynamics of their interactions.

In this paper, we consider the confining potential is the extended Cornell potential [19].

The aim of this paper is to calculate the solutions of the N-radial Schrodinger equation using the analytical exact iteration method (AEIM) [19,29,30]. Additionally, the present results are applied on quarkonium properties in comparison with experimental data and other recent studies.

The paper is organized as follows: In Sec. 2, the exact solution of the N-dimensional radial Schrödinger equation is derived. In Sec.3, the results are discussed. In Sec. 4, summary and conclusion are presented.

2. Exact Solution of the N-dimensional Radial Schrödinger Equation with the Extended Cornell Potential

denote the angular quantum number, the dimensional number, and

is the reduced mass of the two particles

To solve the N-dimensional radial Schrödinger equation with the analytical exact iteration method (AEIM). The following ansatz for the wave function is assumed [19].

By comparing the corresponding powers of r on both sides of Eq. (11), one obtains

To get well- behaved solutions at the origin and the infinity,

Where the coefficient c satisfy this restriction

Then, the relations between the potential parameters and the coefficients

are obtained from the constraint relations,

Then, the energy eigenvalue is:

The corresponding wave function is:

Therefore, the relations between the potential parameters and the coefficients,

are given by the constraint relations,

Then, the energy eigenvalue is:

The corresponding wave function is:

Similarly, the iteration method is repeated many times. Thus, the exact energy formula for the confining potential (1) with any arbitrary n state is obtained:

The corresponding wave functions for any n state are:

where the relations between the parameters of potential and the coefficients

3.1. Mass Spectra of Heavy Quarkonia in the N-dimensional Space

In this section, the properties of charmonuim meson, bottomonium meson, and

meson are calculated, in which the quarkonium meson have quark and antiquark masses. The following relation [1] is used for determining quarkonium masses in the N-dimensional space

By substituting Eq. (30) into Eq. (31), the quarkonium mass in the N-dimensional space takes the following form

Thus, the charmonium mass is given by:

Similarly, the bottomonium mass is calculated from Eq. (33) by replacing

meson mass is computed. The 1S state is closed with experimental data and the other states are in good agreement in comparison with Refs. [32,33,34]. The charmonium mass, the bottomonium mass, and

mass increase with increasing dimensional number due to an increase in the binding energy. 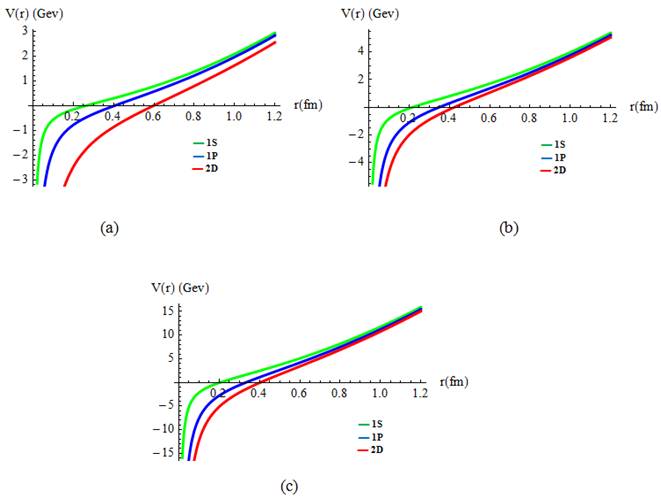 In Fig. 1. The present potential is plotted as a function of distance (r) for different states for the range of distances 0.1 fm ≤ r ≤ 1 fm as in Ref. [35]. The three curves increase with increasing distance (r). Additionally, all curves shift to upper values by increasing angular quantum number. This behavior is in agreement with Ref. [35].

and the mean square velocity

of the bound states of charmonium meson, bottomonium mseon and

meson are calculated by using the Virial theorem [35]. The relation of the mean-kinetic energy and the potential energy is given by:

The present potential is

are computed for different states of charmonium meson, bottomonium meson and

is larger than the radius of

and smaller than the radius of

. In addition, the values of radii of

In the present study, we employ the analytical exact iteration method (AEIM) for determining the energy eigenvalues and the wave functions of the multi-dimensional radial Schrödinger equation with the extended Cornell potential. The charmonium mass, bottomonium mass and

meson mass are analytically obtained in the N-dimensional space and the special cases are obtained in comparison with other studies [2,4,27]. The effect of dimensional number is studied on the mass spectra of charmonium, bottomonium and

meson mass. The obtained results are in good agreement in comparison with Refs [2,4,27] and are in agreement with the experimental data. In addition, the mean radius

and the mean square velocity

is larger than the radius of

and smaller than the radius of

. This observation refers to one of the characteristics of quarkonium that the heavy quarkonium have smaller radii.