Abstract: At present, one of the most important phenomena in Dhaka city is traffic congestion which is the result of high amount of existing vehicles in contrast to inadequate roadway facilities. Though there are a set of factors associated to this, one of the major reasons is the inability to use the city roads to their highest capacities. This study is based on finding the major players behind the growing phenomenon of capacity loss in major city roads. For this, seven major roads have been taken into consideration. A survey has been conducted on different roads of Dhaka City different factors playing key role to reduce the overall capacity have been identified. A group of data has been obtained from all of them to find the capacity reduced from all these roads and the usable capacity available. Different behaviors like parking on street, near intersections, existence of shops near roads, periodic maintenance, lack of facilities for waste disposal and several other factors have been identified for the overall situation. From this study, it has been found that the percentage of avg. capacity loss of roads in Dhaka is 12.91%, whereas capacity loss due to On/Off street construction have found to be 13%. On street parking causes more than 10% of loss of capacity. Water logging causes nearly 8% and poor maintenance contributes to about 7% of total capacity loss. Overall, the study has shown some interesting findings regarding major city road conditions and provided adequate recommendations for improvement.

In Dhaka City one of the major problems in Transportation System is the loss of capacity of roads which is caused due to a set of reasons. Due to various factors the roads within this city cannot function with its fullest capacity. The loss of capacity of roads is a key contributor of traffic congestion. As this is known that traffic congestion in Dhaka City is one of the most important factors behind major economic and environmental loss, this paper is thus motivated to identify the reasons of capacity loss of road and the effects on roads of Dhaka City.

There are different forms of dispersed development which do not follow any forms of monitoring. This creates urban transport problems. The unplanned transportation system has affected the performance of the Dhaka city in the past years. This has been found that, only 9% of roadways and 6% of pavement area are available in this city, among which, 62 km is functional primary, 108 km secondary and 221 km connector roads [1]. Meanwhile, the road network is 16% of total city area in Tokyo and 25% of total area in majority of other developed cities [2]. For this reason in Dhaka, poor infrastructure is worsening the roadway condition. This lessens mobility and depreciate the performance of overall traffic system. The key factors which are responsible for reducing the capacity of the roads of Dhaka City are on street parking, on street market, and on/off street construction, dustbins on roads, poor maintenance of roads, and water logging etc. [3]. In addition, the main factors affecting on street parking are parking at road intersection, non-motorized vehicle parking on road, motorized private vehicle parking on road, and bus stoppage on road [4]. In order to find out the major causes regarding the capacity loss of existing road networks, these factors have been considered to find out the amount of losses faced currently in major city roads. The focus is to find out the major reasons behind the loss and the contribution of each factors responsible. For this, seven major Dhaka city roads has been considered and a wide range of parameters have been assessed in order to find out the major players behind the severe congestion and capacity loss of Dhaka city streets.

Traffic is a frequent phenomenon in Dhaka city. The experts have found that High-amount vehicles and lack of streets are the major causes for this capacity loss [1]. This is natural and a common sight of this densely populated city like Dhaka. Nonetheless, the capacity loss due to countless factors is also a dynamic player of traffic congestion and other transportation problems.

No relevant study or survey methods have been found that can enumerate the capacity loss of roads in Dhaka city. Then again, there are many attempts to sort out the each factors and their impacts on roads. The factors behind capacity loss is described here. 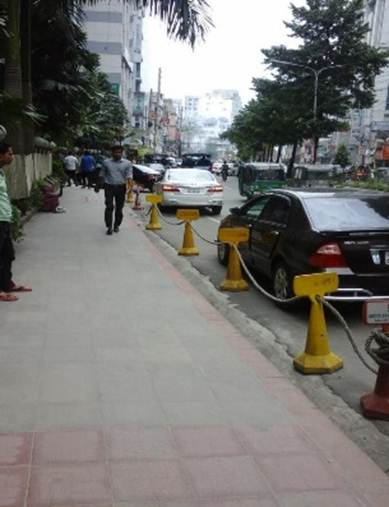 On Street Parking is one of the most common phenomena in the roads of Dhaka city. Due to unplanned parking facilities it is found quite often that various types of vehicles are parked illegally on the roads of Dhaka City. This causes reduction of road width and thus creates hindrance of free-flow of traffic undertaking. It is the most vital factor of reduction of road width of Dhaka city [5]. There are various types of on street parking which are:

a)  Parking at Road Intersection: The road intersections are the most fragile parts for vehicular movement which is also affected by parking. This does not allow the vehicles a smooth run which causes congestion at intersections. Different NMVs (Non- Motorized vehicles) are found parked at most of the major city road intersections currently.

b)  Non-motorized vehicles parking on Road: In Dhaka City, NMVs like Rickshaw, vans are one of the most plentiful types. Rickshaws have been known as one of the most chaotic and unrestrained cluster of vehicles functioning on the city roads. The DCC, which is the licensing authority for the rickshaws, has issued licenses to about 78,000 rickshaws [6]. But the actual number operating within Dhaka is estimated to be anywhere up to 600,000 vehicles [7].

c)   Motorized Vehicles Parking on Roads: In Dhaka, up to the year of 2003, number of registered private cars were more than eighty thousands while after June, 2011, it climbed up to a grand total 1,74,122 which indicates almost doubling the figure in eight years only [8]. The total number of motor vehicles is 6, 43,003 after June, 2011 showing 27.1% of private cars which supplies only 5% of total trips [8]. This phenomenon causes severe congestion which is very common at the festival seasons when more than 9 million people leave Dhaka [9]. As a result, high concentration of parking demand in front of every large development is found even in the form of multiple row parking. (see Fig.1)

Parking at intersection reduces the road width considerably and it is a common feature of Dhaka road [10]. Chao ET. Al. showed various forms of difficulties cussed by on street parking near intersections and found that this is one of the major players behind the capacity loss of city roads [11].

On or, Off Street construction are another forms of problems that lessens the capacity of the road provisionally (see Fig.2). This time-based capacity loss is inspected on Temporary Losses of Highway Capacity and Impacts on Performance by Chin ET. Al. which has shown impermanent losses of highway capacity due to On/Off Street Constructions [12]. 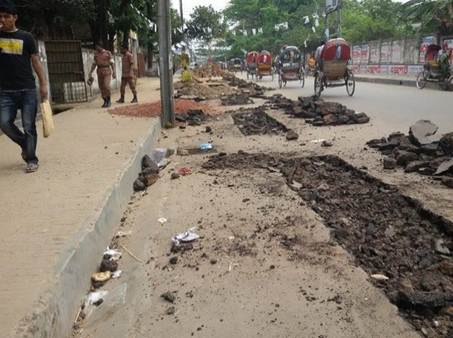 2.4. Maintenance and Management of Roads

Maintenance and Management of roads are very important to control the factors which are guilty of reducing the capacity of the roads. Being a mega city many types of Construction works are happening in the City. Currently a 8.25 kilometer long flyover construction is taking place at Mogbajar-Mouchak [13]. This construction project has started more than two years ago. This massive constructional work reduces the whole Moghbajar-Mouchak-Shantinogor route capacity. Also many types of maintenance work are done on the streets of Dhaka. For this reason the usable capacity of many roads in Dhaka City decreases (see Fig. 3).

Hundreds of tons of solid wastes lie scattered and uncollected on the roads and lanes of the capital every day, hindering pedestrians’ movement and causing health hazards and environment pollution. Every day nearly 1500 tons of solid wastes are left unattended by the Dhaka South City Corporation and the Dhaka North City Corporation [14]. For these reasons we can find many dustbins on streets of Dhaka City. These dustbins are placed lacking proper planning consequently creating problem for ongoing traffic [4].

3.1. Calculation of % of Reduction of Road Width

After classifying the types of obstruction the calculation of percentage Reduction of Road width has been calculated using various factors. To do so, a set of data have been collected at "Peak Time" from different locations when the vehicle flow was highest. The method used for calculation is dependent on following parameters.

The equation needed for the calculation of reduction of road width is [15]:

3.2. Calculation of % of Capacity Loss

In order to analyze the roadway capacity of different major roads in Dhaka city, a set of seven major roads have been taken into account. All the roads play a major role in hauling the city traffic. Upon analyzing the parameters related to capacity of roadways, this has been found that all the roads considered face capacity loss to some extent which hinders the flow capacity of citywide traffic. 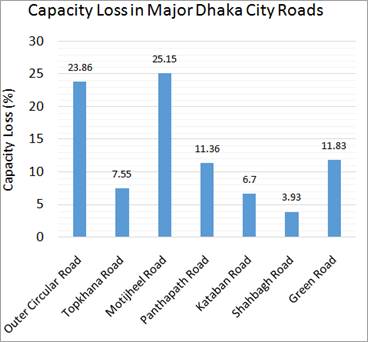 As this is already known that parking near intersections can cause major traffic hindrance, this can also reduce the effective road width. Most of the in city intersection parking is observed at Greenroad which reduces the effective road width about 35.5% which is stated on Table 1. This leaves only about 64.5% road width open to traffic which creates major congestion. In spite of lack of flow capacity, Motijheel road shows least amount of reduction in road width compared to all seven roads considered. From the chart, the trend line shows that, the average amount of reduction of road width in most of the major city roads is about 27%.

Table 1. % Reduction of road width due to intersection parking (Appendix-A).

From various types of parking conditions, this have been found that Non-motorized vehicle (Rickshaw & Vans) reduces nearly 26% of road width which causes a loss of capacity about 1% (Fig. 6). 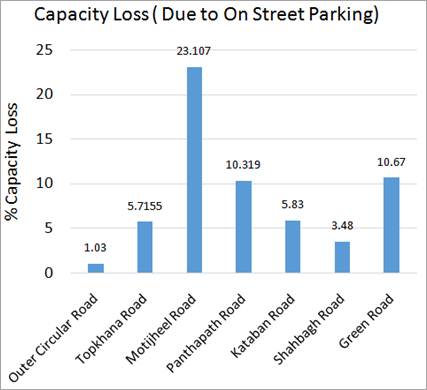 Figure 5. % Capacity Loss due to on street parking. 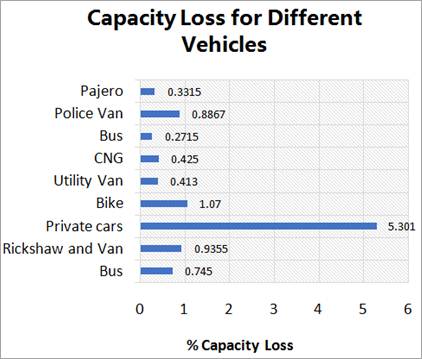 Figure 6. Capacity loss of due to vehicle parking.

Also, the study has found an average amount of 24.86% of loss in roadway width for all the major roads due to on street shops. These shops includes the hawkers, extended portions of roadside shops etc. On or off street construction is another major player for the citywide congestion. In addition, the haphazard maintenance jobs in on and off season also causes major loss in capacity. Detailed survey results are provided in Appendix-A. 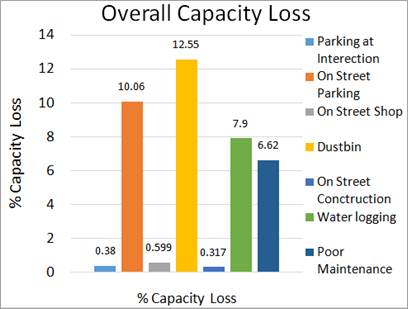 We want to pay our gratitude to our research supervisor, Dr. Tanweer Hasan, Professor, Department of Civil Engineering, Bangladesh University of Engineering and Technology for providing us continuous support and guideline to perform this research work.

Table 2. Collection of field data for the analysis of capacity loss from seven major roads in Dhaka