Abstract: The design process of a product is a multi-step process of selection and assessment criteria to create a final product which meets all the needs of the practice. A small UAV combined between flying-wing and quadrotor is a very complex product, so the design process of this small UAV requires a thorough and circumspect review. The problem is how to optimize the design and to carry out the testing of the feasibility of design requirements with the lowest cost and time savings. For that reason, many tools of Multi-Fidelity Analysis for UAV such as XFLR5, XFoil… have been used to give considerable support for this design process. This research focusses mainly on the analysis/design of the configuration of a small UAV flying wing based on the performance at its cruise speed.

Today, a quadcopter, also called a quadrotor helicopter or quad rotor has become popular as a type of unmanned aerial vehicle (UAV) with typical characters of maneuverability, stability, integration of applications for surveillance, film maker, photography, or toys... However, the downside of this configuration are that all four propellers have to assume as generators of lift and thrust as the same time. That should not be achieved in higher speed flights, in addition, the character of self-stability this configuration is dependent on control algorithms. So, the idea of a composite configuration between a quadrotor and a fixed-wing models allows the integration of precious advantages of both types of models. S. Verling and J. Zilly presented a configuration of a VTOL Glider [1]. M. Hochstenbach and C. Notteboom developed a quadcopter tail sitter, named VertiKUL [2]. As the result, the concept has capability to perform not only vertical take-off and landing as a pure quadcopter, but also to fly as a fixed-wing/flying-wing configuration. Therefore, after taking off vertically at regime of a pure quadcopter and reaching at the certain altitude, the small UAV will gradually have tilted to have the horizontal velocity, and then the generation of lift will be the responsibility of its wing. In this regime, the entire power generated by four rotors will be transferred to the thrust forces so that this concept can take advantage of high speed in comparison with the traditional form of a similar fixed-wing/flying configuration.

This research emphasizes the use of XFRL5, XFoil [3][4][5][6], the multi-fidelity analysis tools for the selection of a suitable flying-wing configuration at its cruising speed (the configuration of the quadcopter is done before and is simplified by a distribution of its payload).

A set of criteria for the best performance of a small UAV have to be set in order to select the best airfoil. Therefore, from our UAV flying-wing design requirements, the criteria for each parameter are shown in Table 2.

Weighted Scoring Method (WSM) is a selection method comparing multi criteria. It includes determining all the criteria related to the selection, giving each criteria a weighted score to reflect their relative importance and evaluation of each criteria.

WSM consists of these following steps:

·        Creating evaluation table for each airfoil is based on criteria.

·        Making sum of all the products and selecting the airfoil with highest total points from full airfoil database.

As shown in Figure 1, the TL54 airfoil (airfoil no. 12) have maximum weighted score, so TL54 is selected for our UAV flying-wing. 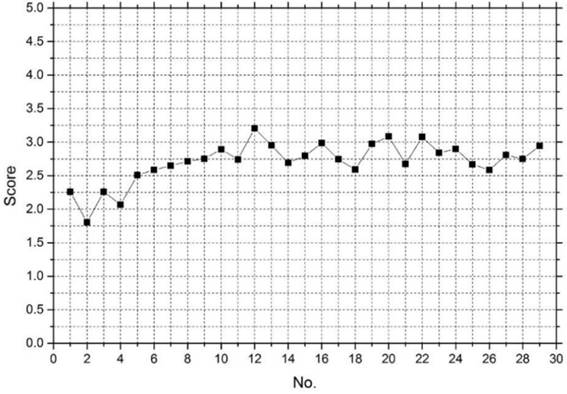 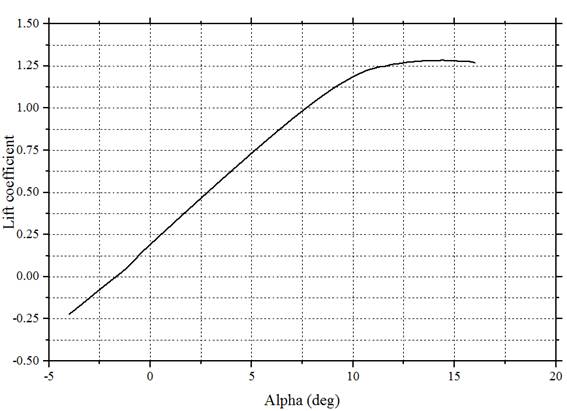 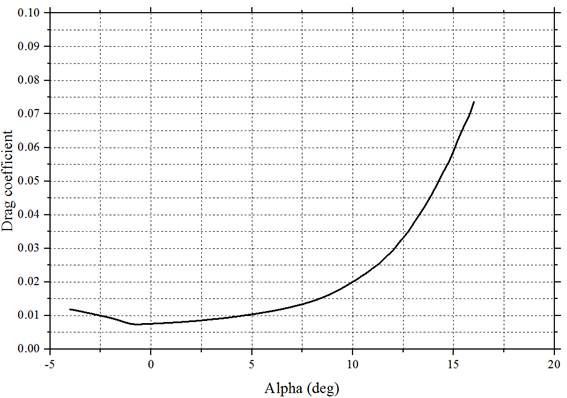 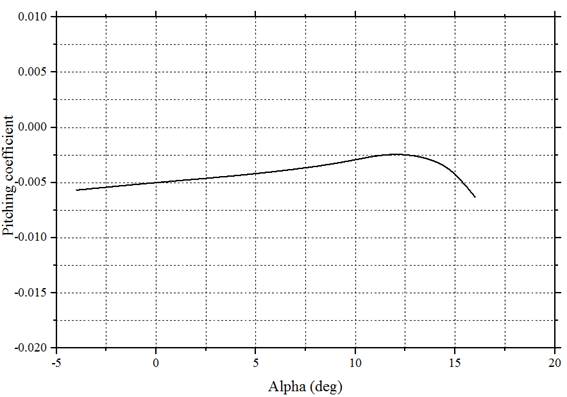 Our research presented in [5] verify that the use of a multi-fidelity analysis tool like XFRL5 could help to evaluate the aerodynamic characteristics of the low speed UAVs with higher fidelity than the use of the conventional aerodynamic approach [11]. Therefore, based on the preliminary sizing, a 3D model of our UAV flying-wing is created and analyzed by XFLR5 (see Fig. 6). 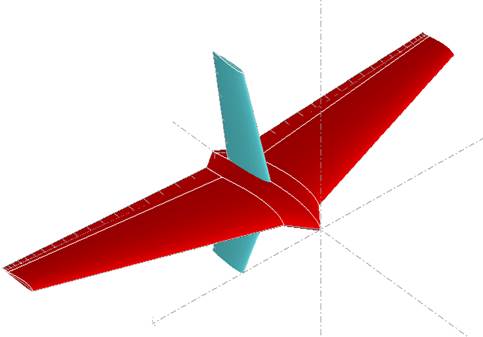 An airplane satisfies the static longitudinal stability if its pitching moment curve has a negative slope (dCm/dα < 0) and to trim at positive angle of attack (Cmo > 0). The pitching moment for an airplane could be expressed by the following equation:

As a result, with an airplane’s configuration, the longitudinal stability could help to determine to the airplane’s center of gravity position in which it is still stable. For our UAV flying-wing, the center of gravity is located at the position of 0.15 meters from the leading edge of the wing root chord (≈ 19.4% MAC) as shown in Fig. 7. 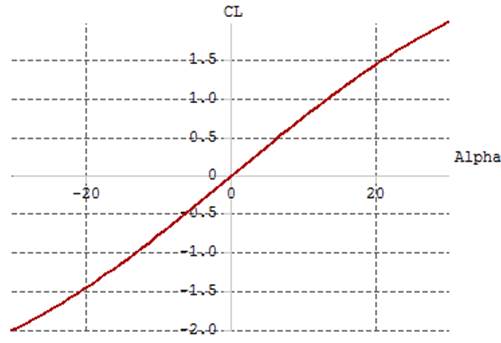 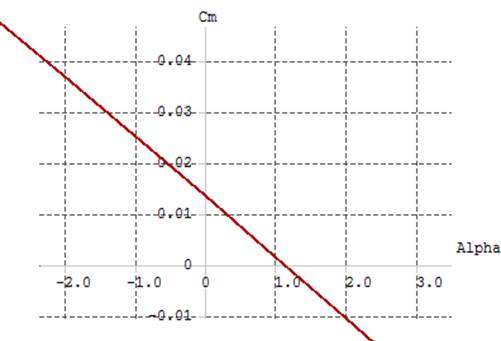 To have static directional stability, the yaw moment must develop a yawing moment that will restore the airplane to its equilibrium state. Assume that the airplane is flying with positive sideslip angle β, the airplane should develop a restoring moment that will tend to rotate it back to its equilibrium condition; that is, a zero sideslip angle. That means the slope of yawing moment curve (Cnβ) must be positive [11]. Figure 10 presents the yawing moment coefficient curve of our UAV flying-wing at the CG of 19.4% MAC and at its cruising speed. With the slope of the yawing moment curve (Cnβ) is about 0.0006 (1/deg), our UAV flying-wing is satisfied the static directional stability condition. 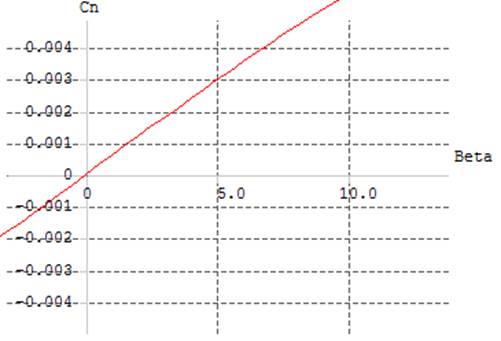 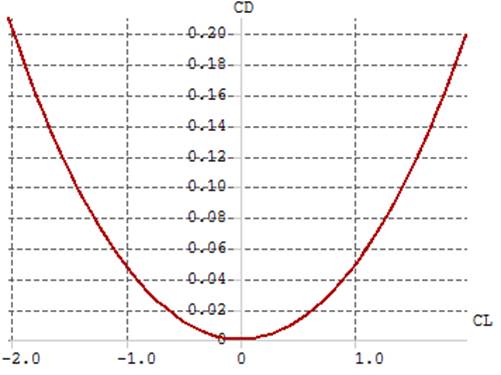 Finally, according to the preliminary sizing, the drag polar characteristics of our UAV flying-wing could be estimated in order to analyze its flight performance. The drag polar of a low Reynolds UAV has the following form:

The figures 11, 12 present the induced drag coefficient curve and the simulation of the air flow over the UAV flying-wing at its cruising speed. 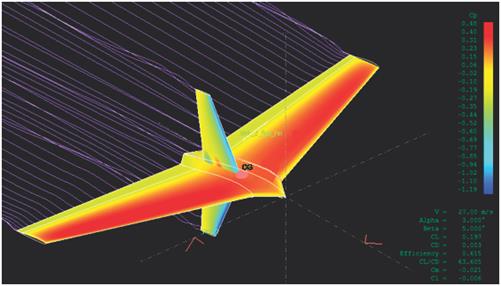 Figure 12. Simulation of the air flow over the UAV flying-wing and the distribution of pressure

A small UAV combined between flying-wing and quadrotor is a very complex product, so the design process of this UAV requires a thorough and circumspect review in order to optimize the design and to carry out the testing of the feasibility of design requirements with the lowest cost and time savings. For that reason, our research emphasizes the use of XFRL5, a multi-fidelity analysis tools, combined with an adequate airfoil selection approach for the selection of a suitable UAV flying-wing configuration in the regime of forward flight.

The limit of our work is the lacking of the capability to estimate the parasitic drag coefficient in order to evaluate the performance of our UAV. This is one of the future work in this research. Another future work is to study the stability/control of our UAV for autonomous parcel delivery with transition from vertical take-off to forward flight.

This paper is supported by VSKYLINE Ltd. in the project of designing a small unmanned aerial vehicle for surveillance.