Abstract: Hypertension is elevation of systolic blood pressure greater than or equal to 140 mm Hg and/or diastolic blood pressure greater than or equal to 90 mm Hg. It affects 1 billion people and accounts for approximately 7.1 million deaths annually. It is significant risk factor for cardiovascular disorders. Some medicinal plants are traditionally used to treat hypertension. Psidium guava is one of widely cultivated medicinal plant used as traditional medication for diabetes, vomiting, diarrhea and dyslipidemia. The study was designed to identify effect of P. guava leaf extract on hypertension in guinea pigs. The study was conducted on six male guinea pigs to measure the effect of ethanol P. guava leaf extract by using invasive method. The result was analyzed by using paired t-test, independent student t test, one –way ANOVA. Ethanol extract of P. guava leaf showed a significant (p= 0.001) ability to relax isolated aortic tissue of guinea pigs in dose dependent manner, after induction of aortic muscle contraction by high potassium chloride concentrations (80 mM KCl). The effects of P. guava leaf extract in relaxation contracted aortic tissue was may be due to numerous effect of phytochemicals.

Non-communicable diseases have long duration and generally slow progression. Basically, it can be categorized as cardiovascular diseases (CVDs), cancers, chronic respiratory diseases and diabetes [42]. They have many negative impacts on human health and economy [18]. CVDs are considered as one of major cause of death [42]. Low and middle-income countries bear a large burden of CVDs account 80% of world CVD-related deaths and 87% of disability may be due to accessing fast/ sweet foods that may contribute for different CVDs [15].

Hypertension is elevation of systolic blood pressure (SBP) greater than or equal to 140 mm Hg and/or diastolic blood pressure (DBP) greater than or equal to 90 mm Hg [23]. Increasing in its prevalence leads to dramatic rises in the incidence of CVDs and their consequences [10], [24], and [18]. It is one of the most common global health problems, affecting approximately one billion people and accounts for approximately 7.1 million deaths annually [29]. Different factors such as gender, age, genetic factors, alcohol consumption, dyslipidemia, smoking increases its severity [5], [10]. It can be classified into primary resulted from sedentary lifestyle and diet (accounts for 90-95%) and secondary resulted from chronic kidney disease which accounts for 5-10% [21], [22]. Although mechanisms of primary hypertension are not well known, secondary hypertension can be resulted from defect in arterial sub-endothelial cells; renin-angiotensin-aldosterone system; central nervous system dysfunction, leading to elevated sympathetic activity [13].

Diuretics, angiotensin converting enzyme (ACE) inhibitors, angiotensin receptor blockers (ARBs), calcium channel blockers (CCBs), alpha and beta blockers are drugs that used in hypertension treatment. All these drugs have their own side effects [36].

Medicinal plants are rich with ingredients that have been used in drug development [15]. According to report by [20], between 70 to 80% of the world’s population relies on herbal medicine. Over three-quarters of the world population relies on plants for their health care [14]. About 80% of the Ethiopian populations depend on traditional medicine from plants for their healthcare [3]. About 300 of the traditional medicinal plant species of Ethiopia are frequently mentioned as sources for medicinal value [3], [4]. Blood pressure can be reduced when smooth muscle are relaxed. Potassium channel opening, calcium channel blocking and receptor antagonism are mechanisms that contribute Smooth muscle relaxations [12]. Annona leaf extract in normotensive Sprague Dawley rats was reported to lower elevated BP due to presence of essential oils present in the plant exhibiting vasodilator activities [27]. Garlic is another herb that can reduce BP by stimulating nitric oxide production, resulting vasodilatation [26].

Psidium guava (P. guava) is a small medicinal tree. It is native to Mexico, Central America, and northern South America. Its family is Myrtaceae. There are two common varieties of guava: the red (P. guajavavar. pomifera) and the white (P. guajavavar. pyrifera). Its fruits is one of the most popular and rich with nutrition and has been used traditionally as a medicinal plant throughout the world for a number of ailments [1]. It is low in calories and fats but contains numerous vitamins, minerals antioxidants, polyphenolic and flavonoid compounds that may play important role in prevention of CVDs [4], [32]. Potential medicinal effects of P. guava fruit, roots, leaves or branches have been described in animal and human studies [19]. Though there are no published studies on medicinal effects of P. guava in Ethiopia, P. guava is recommended as a traditional medicine for various ailments, including nausea and vomiting, diarrhea, and as an antimicrobial in different parts of the country. Animals and human studies suggested that P. guava leaf, root, fruit or branches may be used to treat diabetes and dyslipidemia [2], [8], [14], [26], [33], [35], [37]. Anti-inflammatory effects of P. guava have also been described [6], [9], [39], [41]. Another study also suggested that P. guava may have strong anti-oxidant properties [30], [40]. Hepato-protective and anti-cancer effects have also been suggested in non-human studies [17], [25], [28], [31]. However, some studies showed negative effects of P. guava on spermatogenesis in rats [7]. Its effects may be due to the presence of many different phytochemical compounds such as vitamin C, vitamin A, iron, calcium, manganese, phosphoric, oxalic and malic acids, saponin combined with oleanolic and others [16], [34]. Quercetin, α-pinene, β-pinene, limonene, menthol are compounds from its leaves; polyphenols and resin exist in its bark; gallic acid and tannin are found in its roots; and phenolics and flavonoids are found in its seed and wings [22], [38]. Therefore, this study was designed to examine the effect ethanol P. guava leaf extract on relaxation of aortic muscles in guinea pigs.

The study was conducted at Addis Ababa University, School of Medicine, laboratories of Biochemistry, Physiology, pharmacology animal house and Ethiopian Public Health Institute. The study protocol was approved by research and ethical committee of Biochemistry department. The matured fresh leaf of P. guava was collected, washed and dried under shaded area. Then it was extracted by 70% of ethanol. Dose for this experiment was determined based on pilot studies, because no pre-existing data was available in the medical literature. Six male guinea pigs weighing 400 - 600 grams were given one week acclimatization period in the pharmacology animal house. They were allowed free access to water and cabbage at controlled ambient temperature of 22 ± 2°C and 50 ± 10% relative humidity, with 12 hour light/12 hour dark cycles. Guinea-pigs were sacrificed stunning and cervical dislocation. Descending thoracic aorta was quickly removed and placed in Krebs-Henseleit solution which was made from NaCl 6.9 g/L, NaHCO3 2.1 g/L, CaCl20.36 g/L, KCl0.373 g/L, KH2PO40.16 g/L, MgSO40.141 g/L and glucose 2g/L at pH 7.4. Excess fat and connective tissues were trimmed off. Aorta was cut spirally resulting in long strip. From this strip a short strip (2 to 3 cm) was prepared for the experiment. The aortic tissue was kept moist with Krebs-Henseleit solution during the whole procedure and the strip preparation was mounted in a 2.5 ml tissue bath containing Krebs-Henseleit solution, maintained at 37 0C and continuously bubbled with a mixture of 95% O2 and 5% CO2. A resting tension of 1g was applied to the tissue and an equilibrium period of 1hour and 10minutes was allowed to equilibrate before addition of any P. guava leaf extract. High K+ (80 mM KCl) was added to the bath solution to induce sustained contraction of the aortic tissue. During this period fluid was changed at every 15minutes. The P. guava leaf extract was later applied to check relaxation of aortic contraction induced with high K+ (80 mM). Contraction that induced by KCl was accepted as 100%. When the contracted tissues were treated with extract. The relaxation was determined by percent in opposite direction to contraction. A change in isometric tension of the strip was measured via a force displacement transducer (FT- 03) using a grass model 7E polygraphs [11]. 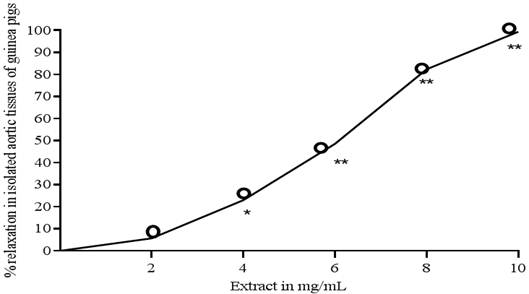 Hypertension is a common health problem, affecting approximately one billion people globally, and accounts for 7.1 million deaths annually according to the report by [29]. It is major risk factor for cardiovascular diseases. Its prevalence is increasing throughout the world, including Ethiopia and the rest of sub-Saharan Africa, according [19], [24]. Medicinal plants have been used in treating of mainly different types of diseases. Human also prefer them due to having of inadequate supply of drugs, side effects of allopathic medicines, resistance to drugs and high cost treatments [33]. And also might be due to its easiness to access and low costs of plants. According to [14], over three-quarters of the world population relies mainly on plants and plant extracts for health care. Many medical plants’ products act synergistically, and they may also act synergistically with synthetic pharmaceuticals [34]. P. guava has many traditional medicinal uses in different countries, including Ethiopia.

In this study aortic tissues of guinea pigs were treated with high concentrations (80Mm) of potassium chloride. It was applied to induced maximum contraction (100%) to the aortic tissues of guinea pigs. As reported by [11], potassium chloride at high concentration (>30mM) can induce smooth muscle contractions. This is mainly might be through opening of voltage-dependent Ca2+ channels, thus allowing influx of extracellular Ca2+, causing a contractile effect [4].