Abstract: The aim of present study was to evaluate the effect of myrtenal, a monoterpene on plasma and tissues glycoprotein components in streptozotocin-induced diabetic rats. Diabetes was induced in overnight fasted experimental rats by a single intraperitoneal injection of streptozotocin (STZ; 40 mg/kg body weight) dissolved in 0.1 M citrate buffer at pH 4.5. STZ-injected animals were given 20 % glucose solution for 24 h to prevent initial drug-induced hypoglycemia mortality. The levels of plasma glucose, plasma and tissues glycoproteins such as hexose, hexosamine, fucose and sialic acid were significantly increased whereas plasma insulin levels were significantly decreased in diabetic rats. On oral administration myrtenal (80 mg/kg b.w.) once daily to diabetic rats for the period of 28 days brought back the levels of plasma and tissues glycoprotein components. Based on the present study, we propose that myrtenal possesses significant protective effect on glycoprotein metabolism.

Diabetes mellitus (DM) is one of the most considerable chronic diseases associated with defects in insulin secretion, insulin action, or both, resulting in impaired function in carbohydrate, lipid and protein metabolism. Moreover, chronic hyperglycemia leads to the pathogenesis of macrovascular and microvascular complications [1].

High glucose/hyperglyceamia (and also other sugars) activates the polyol pathway, increased formation of AGEs (advanced glycation end products) along with the expression of the receptor for AGEs, activation of protein kinase C (PKC) isoforms and increased activity of the hexosamine pathway were reported to be important [2]. Glycoproteins are carbohydrate linked protein macromoleculesfound in the cell surface, which form the principal componentof animal cells. Hexose, hexosamine and sialic acid are the basic components of the glycoproteins. They play an important role in membrane transport, cell differentiation and recognition, the adhesion of macromolecules to the cell surface and the secretion and absorption of macromolecules [3]. Impaired metabolism of glycoproteins play a major role in the pathogenesis of diabetes mellitus [4]. It has been reported that alterations occur in the concentrations of various glycoproteins in human diabetes [5]. The raised levels of glycoproteins in diabetics may also be an indicator of angiopathic complications [6]. Several workers have suggested that elevated levels of glycoproteins in plasma, liver and kidney tissues in the diabetic condition could be a consequence of impaired carbohydrate metabolism. Insulin deficiency and high levels of plasma glucose in the diabetic condition may result in an increased synthesis of glycoproteins [7].

Several oral therapeutic agents are the foremost option treatments of type 2 DM. The rationale of these oral hypoglycemic agents is to ameliorate the underlying metabolic disorder, associated with inadequate insulin secretion and insulin resistance. However, they have limited efficacy and occasionally produced severe side effects such as weight gain, hypoglycemia, gastrointestinal disturbances, liver injury and heart failure [8]. Consequently, alternative medicines and natural therapies have received renewed attention in recent decades. A number of species of medicinal plants have been described in scientific and literature as having hypoglycemic action. The plant kingdom is a wide field to search for new drugs and biologically active compounds that have perceived effectiveness, minimal side effects or no side effect in clinical practice [9].

In recent years, terpenoids are extensively studied upon various diseases including diabetes. It has been documented to posses pharmacological effects against various diseases. Myrtenal is a monoterpene found in Mint, amongst other traditional herbs. It has been reported to possess various biological activities such as antioxidant, anticancer, cyclooxygenase-inhibitor and immunostimulant effects [10-12]. Recently, we have found that myrtenal has the antidiabetic and hepatoprotective effects in experimental diabetic rats [13]. But, there is insufficient evidence in the literature to make a definitive conclusion about the effects of myrtenal on glycoproteins level. Considering these facts and lack of efficient information about pharmacological effects of myrtenal role in diabetes, we have investigated the glycoproteins level in STZ-induced experimental diabetic rats.

Myrtenal and Streptozotocin (STZ) were purchased from Sigma-Aldrich (St. Louis, MO, USA). All other chemicals used in this study were of analytical grade obtained from Merck and Hi Media, India.

2.3. Induction of Diabetes in Rats

Diabetes mellitus was induced in overnight fasted experimental rats by a single intraperitoneal injection (ip) of STZ (40 mg/kg bw) dissolved in 0.1 M citrate buffer at pH 4.5. STZ injected animals were given 20% glucose solution for 24 h to prevent initial drug-induced hypoglycemia mortality. STZ injected animals exhibited hyperglycemia within a few days. Diabetic condition rats were confirmed by measuring the elevated fasting plasma glucose (by glucose oxidase method) 72 h after STZ injection. The rats with fasting blood glucose above 250 mg/dL were considered to be diabetic and used for the experiment.

The rats were divided into four groups, each comprising of six rats (24 rats). Myrtenal was dissolved in 1 mL of corn oil and administered orally to the experimental rats using an intragastric tube daily for a period of 28 days [13].

At the end of the experimental period, all the animals were fasted overnight, anaesthetized and sacrificed by cervical dislocation. Blood samples were collected in tubes containing potassium oxalate and sodium fluoride (3:1) mixture for the estimation of fasting plasma glucose. The liver and kidney were dissected out, washed in ice-cold saline and stored at -80°C until used. The liver and kidney were weighed and 10% tissue homogenate was prepared with 0.1 M Tris–HCl buffer, pH 7.4. After centrifugation, the clear supernatant was obtained and used for biochemical assays.

To 0.1 mL of plasma, 5.0 mL of methanol was added, mixed well and centrifuged for 10 min at 3000×g. The supernatant was decanted and the precipitate was again washed with 5.0 mL of 95% ethanol, recentrifuged and the supernatant was decanted to obtain the precipitate of glycoproteins. This was used for the estimation of hexose and hexosamine. For extraction of glycoproteins from the tissues, a known weight of the tissue was homogenized in 7.0 mL of methanol. The contents were filtered and homogenized with 14.0 mL of chloroform. This was filtered and the residue was successively homogenized in chloroform-methanol (2:1 v/v) and each time the extract was filtered. The residue (defatted tissues) was obtained and the filtrate decanted. A weighed amount of defatted tissue was suspended in 3.0 mL of 2 N HCl and heated at 90°C for 4 h. The sample was cooled and neutralized with 3.0 mL of 2 N NaOH. Aliquots from this were used for estimation of fucose, hexose, hexosamine and sialic acid.

Data are presented as means ± standard deviation (SD) and were subjected to statistical significance was evaluated by one way analysis of variance (ANOVA) using statistical package for the social sciences (SPSS) Version 17.0 (SPSS, Cary, NC, USA) and the individual comparisons were obtained by Duncan’s multiple range test (DMRT). Values were considered statistically significant at p < 0.05. 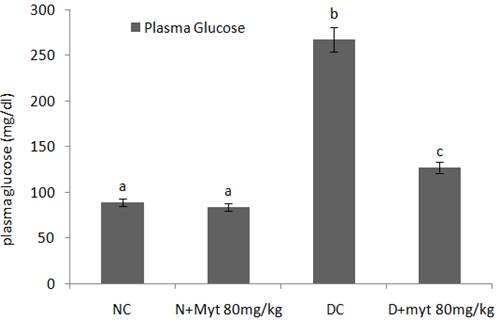 Figure 1. Effect of myrtenal on plasma glucose levels in normal and experimental rats.

Values in each group are represented as means ± SD for 6 rats in each group. Values are not sharing a common superscript letter (a-c) differ significantly at p < 0.05 (DMRT).

Table 1. Effect of myrtenal on plasma insulin levels in normal and experimental rats.

Type 2 diabetes is one of the most common chronic and progressive diseases and is a consequence of number of defects including impaired insulin secretion by the pancreatic cells, resistance of peripheral tissues to the effect of insulin and augmented hepaticg glucose production. Effective control of blood glucose level by increasing the secretion of the insulin granules and regeneration of beta cells in the pancreas is a key step in preventing diabetic complications and improving the quality of life in type 2 diabetic patients [18]. In the present study, STZ induced diabetic animal showed increased plasma glucose and decreased insulin levels were observed. Oral administration of myrtenal improved the glyceamic control. Myrtenal improved the insulin secretion from remnant β-cells, which in turn enhance glucose utilization by peripheral tissues of diabetic animals either by promoting glucose uptake and metabolism, or by inhibiting hepatic gluconeogenesis and decreased blood glucose levels [13]. In previous study, the terpenoids have produced same effect in diabetic condition; the role of terpenoids in ameliorating hyperglycaemia could be by potentiation of release of insulin from β cells of islets [19,20].

Glycoproteins are carbohydrate linked protein macromolecules found in the cell surface, which form the principle components of animal cells. They play vital role in membrane transport, cell differentiation and recognition, the adhesion of macromolecules to cell surface and the excretion and absorption of macromolecules [21]. Prolonged elevation of blood glucose in diabetes may result in structural and functional alteration of both circulating and membrane bound proteins [22]. Alterations in the diabetic state of the composition of the carbohydrate components of glycoproteins, especially serum glyloproteins and glycoproteins of the capillary basement membrane have been reported [23].

Increased glycosylation of various proteins in diabetic condition have been reported [24]. In ours study, we have noted the elevated levels of hexose, hexosamine, fucose and sialic acid in the plasma and tissues (liver and kidney) of streptozotocin induced diabetic rats. The increase in plasma glycoprotein components has been linked with the severity and period of diabetes. The secretion or shedding from cell membrane glycol conjugates into the circulation leads to the elevation of plasma glycoprotein components [25]. This is due to the depressed utilization of glucose by insulin dependent pathways leads to increase the formation of hexose, hexosamine, sialic acid and fucose for the accumulation of glycoproteins [26]. Administration of myrtenal to diabetic rats decreased plasma the levels of glycoprotein components. This could be due to the decreased hyperglycemic state with increased levels of plasma insulin in diabetic rats.

The liver is principally responsible for producing a abundance of glycoproteins present in blood. The elevated levels of plasma glycoproteins in diabetic condition could be a consequence of abnormal carbohydrate metabolism [27]. Hexose, hexosamine and sialic acid are the fundamental components of the glycosaminoglycans and glycoproteins. Increased depositions of these components have been observed in the liver of STZ-induced diabetic rats [3,28]. Oral administration of myrtenal to diabetic rats decreased the levels of glycoprotein components in liver.

In hyperglycemia, free amino groups of proteins react slowly with the carbonyl groups of reducing sugars such as glucose, to yield a schiff-base intermediate and these schiff-base intermediates undergo Amadori rearrangement to stable ketoamine derivative (fucosamine) [29]. Fucose is a member of the group of 8 essential sugars the body requires for optimal function of cell-to-cell communication and its metabolism shows to be altered in various diseases such as diabetes mellitus [30]. Elevated levels of fucose in experimental diabetes were reported by researchers [31,32].

Renal disease is one of the most common and severe complications in diabetes [33]. Diabetes mellitus affects the kidney and is the leading cause of diabetic nephropathy. In addition to prominent role played by factors such as oxidative stress, abnormal lipid metabolism and renal accumulation lipids and others, abnormal glycoprotein metabolism have also been proposed to play a pivotal role in the pathogenesis of diabetic nephropathy [34]. The excess availability of glucose in the hyperglycemic state accelerates the synthesis of basement membrane components, i.e., glycoproteins [26] and this leads to the thickening of capillary basement membrane [35]. This is due to depressed utilization of glucose by insulin-dependent pathway, thereby enhancing the formation of hexose and hexosamine for the accumulation of glycoproteins [7]. The luminal surface of epithelial cells in kidney tubules is also lined with a thick carbohydrate rich glycoprotein layer [3]. Stimulation of kidney protein synthesis may contribute to explain the increase in the synthesis of glycoproteins (and therefore of the basement membrane) as well as the renal hypertrophy that occurs early in diabetes [36]. Treatment with iridoid glucoside reversed the alterations induced in levels of hexoses, hexosamine, fucose and sialic acid in the kidneys of diabetic rats. This may be due to the activation of glucose transport mechanism and also alters insulin binding receptor specificity [37].

We thank the University Grants Commission (UGC), New Delhi, India for funding support in the form of research fellow under Research Fellowship in Science for Meritorious Students (RFSMS) Scheme (F.25-1/2013-14(BSR)/7/10/2007) to Mr. A. Rathinam.