Abstract: Population growth as well as the growth in energy demand is one of the most challenging problems in the world. Therefore, there is great need of green energy technologies and one of the green energy resources is solar cell that converts sun rays in a photovoltaic way into electrical energy. Firstly, we have presented a structure and after simulating this structure and reaching to approximately close results we expect any improvement in simulated model can be accessible in manufactured model. In this article, synchronous analysis of layer thickness for reaching to the maximum efficiency has been done. Our analysis performs to maximize the efficiency and minimize the thickness of layers with toxicant and expensive cd material. The results, shows increase of the efficiency and extreme decreasing in Cd layers thickness.

Energy radiated from sun towards earth changes into electrical energy by solar cells. This operation uses radiant energy from sun is called photovoltaic. In solar cells classification, thin film solar cells are one of the less-priced cells although utilization of solar cell compared to other energy sources especially fossil fuel is more costly [1].

Third generation thin-film solar cells are the most inspiring field of photovoltaic solar cell research. They are much more cheaper to produce due to using simpler deposition processes and in comparison to the typical single-crystal cells require much less raw materials. Polycrystalline CdTe films which is used in a CdS/CdTe heterojunction configuration have high optical absorption coefficient so thickness of the CdTe affects photon absorption [2]. A ZnTe layer is usually used as a back surface barrier to repel the electrons at the CdTe/ZnTe heterojunction and thus decrease the loss of carriers at the back contact (due to presence of a higher band-gap layer at the back) [3]. This layer also reduces carrier recombination at the back contact due to the barrier (i.e. conduction band discontinuity) for electrons at the interface between CdTe and ZnTe layers. At this interface the electrons will be reflected and collected with a higher probability at the CdS/CdTe heterojunction. The thickness of CdS put a great effect on cell’s efficiency and thinner CdS films produce higher short-circuit current densities [4]. During the past 17 years CdTe solar cells efficiency were increased but in recent years a lot of efforts have been made to increase it more [5,6,7].

There are two main goals in fabricating solar cell

High efficiency and low price. One of the ways to increase the solar cell efficiency is to analyze the thickness of solar cell and to supply new layers. [3, 8]. In [8] the voltage of open circuit increases 100mv compared to early structure after adding Ta2O5 metal oxide between two layers of CdS and CdTe and analyzing the best thickness.

Cd solar cells are recognized as cell with low-priced and highly-efficient cell however this price can be reduced by taking some considerations [9]. (Figure 1) 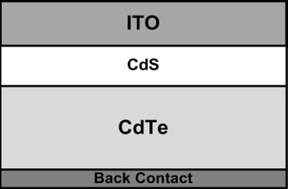 In this section the thickness layers is analyzed. Cell efficiency is enhanced in ITO/CdS/cds1-xtex/CdTe/ZnTe/ZnTe structure using grading at CdS\CdTe area and also utilizing stepped doping strategy in ZnTe layer [10]. 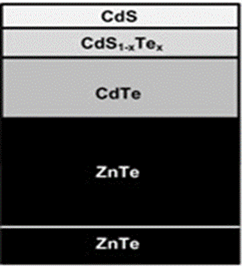 Table 3. Comparison of simulated results with referenced structure no.2.

As it is shown in the table 3, characteristic of simulated cells are similar to referenced cell. This modeling is an appropriate step for further simulation at designing and modeling of new solar cell structure. The above model was analyzed without using grading layer. This structure was changed into ITO/CdS/CdTe/ZnTe/ZnTe/ZnO structure. The thickness of each layer separately was examined for reaching to the most efficiency. The extracted result of each layer has been inserted at Table 4.

Table 4. The results provided from best thickness of ITO/CdS/CdTe/ZnTe/ZnTe/ZnO structure in separate analysis.

As shown, the cells efficiency at this thickness is equal to 28.03. We reach the thickness that has been portrayed in table 5 with the limitation of not increasing the total thickness more than 3.95mM and minimum use of cadmium and 10 nM manufacturing technology.

Table 5. The results provided from best thickness of ITO/CdS/CdTe/ZnTe/ZnTe/ZnO structure in synchronous analysis. 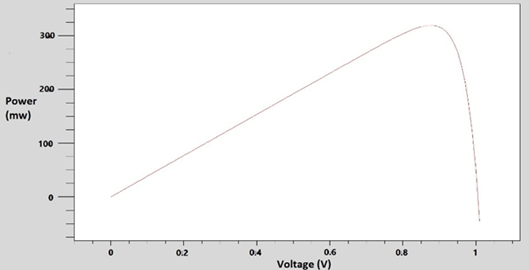 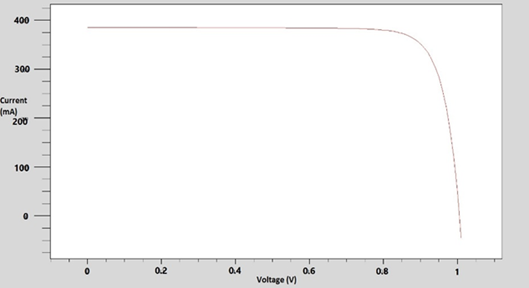 Figure 3. Basic parameters of the cell.

Table 6. Comparison of cd layers with their efficiency.

In this structure, CdTe thickness increases in comparison with the work presented in [10]. However, CdS thickness decreased and cds1-xte1 was omitted. One of the aims of the research is to design such a configuration to minimize CdS and CdTe thickness in order to decrease layers possessing Cadmium while the other cells characteristic are not affected. CdTe have strong chemical bonds compared to CdS, which means CdS is more heat resistant than CdS. Hence, we encounter less problems in fabrication process in result of decreasing in CdS thickness and increasing in CdTe thickness.

m. CdTe thickness decreasing brings up some problems such as photon income

Plate absorption and decreased recombination at back surface. Less expensive solar cell can be achieved by using proper BSF in assist of enough photon absorption by BSF layer we can reach to appropriate efficiency as we already mentioned.

One of the items which increases the expenses in producing CdS\CdTe solar cells is the amount of cadmium Thickness.

Recently researchers have tendency to decrease the thickness of this layer and CdS\CdTe thin film layers draws a lot of attention in this regard. Thin ZnTe (20nm) utilizes to return electrons but thick ZnTe besides electron returning participates in absorption process. This is due to the fact that collecting photons with longer wavelength, returns more wave carriers out of from 500 nm to 900nm range.

This will increase cell efficiency with thickening of ZnTe layer compared to the study done in [9]. This mechanism results in increasing solar cell efficiency. ZnTe becomes easily-doped with elements such as phosphorus, arsenic, etc. Impure ZnTe produces with Rf distribution and MOCVD technology [11]. Silvaco simulating software has been utilized. Radiant light are specified under AM 1.5 standards. Physical parameters which are used in simulation are shown in Figure 2 and the final results are presented in Table 7.

In this article, a new design for CdTe collar cell was proposed with analyzing all cell layers thickness in synchronous way by the aim of minimizing cd usage, slimming down the size of layers with this toxicant metal and optimizing this layer along with other layer thickness optimization.

As it was discussed, using of ZnTe 10 18, ZnTe10 16 with more thickness causes more accumulation of photons with longer wave length, more carriers returning and more out of range absorption because of discontinuity in lead bar at the end of CdTe ZnTe common connection more electrons are returned and this causes recombination diminution, as ITO becomes thinner, much more light can pass through this layer and all this applied changes caused to increased efficiency in 7.5% compared to referenced structure.