Abstract: Biodiesel is an alkyl ester of long chain fatty acids and considered as an alternative to lower the appalling consequence of fuel on the environment. It is produced by transesterification of a fat or oil with a short chain primary alcohol like methanol and alkali like sodium hydroxide (NaOH). Palm oil (Elaeis guineensis) was used as source to produce biodiesel and Box Behnken experimental design was applied to see the effect of various process parameters, i.e. methanol quantity, alkali concentration and temperature for the optimization of calorific value of biodiesel. Response surface plots and contour plot were created in order to perceive the optimum condition. Though, all the three variables significantly affected the calorific value of the palm biodiesel, but it was found that methanol was more effective variable than alkali concentration and temperature. It was observed that 12.5 ml methanol/50 ml oil and 0.4 gm NaOH/50 ml oil and 55°C temperature were optimum condition, where the calorific value of palm biodiesel is 9297.206 kcal/kg.

It is anticipated that the primary energy in every form from gasoline and diesel to the non-commercial fuels like biomass consumption of the entire world in a year is almost equivalent to ten thousands million tons of oil [1]. An increase of energy consumption will rise to forty nine percent from year 2007 to 2035 is conjectured by analyzing total vend energy of the world [2]. By considering the possibility of reduction of the oil production globally and the continuous rise of energy requirement for every day, the search for alternative fuel is must to meet the energy demand. Hence, biodiesel as a source of energy could become the alternative fuel. When the fossil fuel is burned it releases carbon dioxide (CO2) at an amount of near about twenty one billion in one year, in which merely half of the anticipated quantity of CO2 was captivated by means of natural process. Thus, every year an excess of 10.65 billion tons of CO2 added to the atmosphere [3]. Whereas, biodiesel burning emits less than eighty percent carbon dioxide and emissions of sulfur dioxide tends to zero [4].

An alternative type of petroleum diesel fuel is biodiesel, generally made from different vegetable oils, waste products, animal fat or recycled restaurant greases. Biodegradability and emission of minimal amount of air pollutants make it more environment friendly fuel than petroleum fuel. Basically, biodiesels are the long-chain alkyl esters derived from organic sources, resulted from the chemical reaction of lipids (e.g., vegetable oil, animal fat) and alcohol termed as transesterification process. The use of alcohol and base or acid catalyst is extensively used in chemical conversion process to generate methyl esters from the base oil. Glycerin is formed as a by-product of the transesterification process [5,6]. It differs from the vegetable and waste oil which directly used in fuel engine requires conversion of the diesel engine, as it is made in proper diesel forms to utilize in the regular diesel engine, whether use it in its pure form or combination with petroleum diesel [7,8].

The demand for the production of biodiesel is increasing throughout the world because of its high quality fuel properties that makes it easy to use in almost every type of diesel engine. Industrial scale manufacturing of palm biodiesel is the way to go as it will not only bridge the energy deficit in the near future, but also it will deal with the ever increasing outcry of environmental contamination. Fossil fuel acts in the opposite because it defiles the environment in a great extend [9].

The research work was carried out with palm oil collected from local market (Khulna, Bangladesh). Methanol and sodium hydroxide used in the transesterification reaction were supplied by Merck, Germany.

In transesterification reaction, three moles of methanol react with one mole of triglyceride. The reaction is slowed by mass transfer limitations since at the start of the reaction the methanol is only slightly soluble in the oil and later on, the glycerin is not soluble in the methyl esters. Since the catalyst tends to concentrate in the glycerin, it can become unavailable for the reaction without agitation. The procedure of making biodiesel follows several steps. 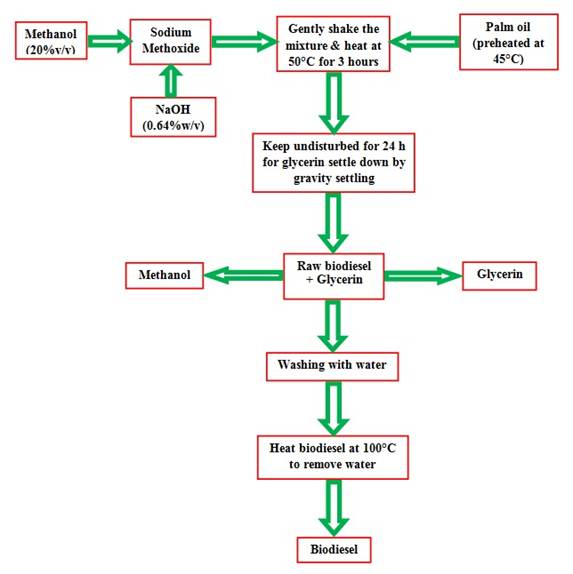 Reaction: The alcohol catalyst mix was then poured into a conical flask and the oil was added. The palm oil was heated at 45°C temperature before mixing with alcohol-catalyst mixture. After adding oil the system keeps air tight to prevent the loss of alcohol. The reaction mix was kept just below the boiling point of the alcohol to speed up the reaction and the reaction took place. The reaction was held under constant temperature around 50-60°C on the water heater. Reaction time varies from 1 to 8 hours.

Methyl Ester Wash: After the methanol had been removed, the biodiesel needs to be washed to remove residual free glycerin, methanol, soaps and catalyst. This was done by liquid-liquid extraction by mixing water with the biodiesel and gently agitating and the soap was separated by gravity separation. The washing process was done 3-4 times until the wash water no longer picks up soap.

The Box-Behnken design is a type of response surface methodology (RSM) used as the experimental design. It is an independent quadratic design. These designs are rotatable (or near rotatable) and require three levels of each factor. Three variables were methanol (ml, X1), NaOH (gm, X2) and temperature (°C, X3); three levels are +1, 0 and -1 respectively. Table 1 represents three variables and their coded levels. The central values (zero level) chosen for experimental design were: methanol-X1 (12.5 ml i.e. 0.25ml methanol/ml oil), NaOH-X2 (0.4 gm i.e. 0.008gmNaOH/ml oil) and temperature-X3 (55°C).

Table 1. Range of independent variables in the experimental design.

Where Y is the response (calorific value); X1 methanol, X2 NaOH concentration, X3 temperature; A0 the regression coefficient, A1–A3 are the linear coefficients, A4–A6 the cross product coefficients, and A7–A9 are the quadratic coefficients. The regression analysis, statistical significance and analysis of variance (ANOVA) were carried out using Microsoft Office Excel. Surface plots and contour plot were developed using the same software along with Sigma Plot software.

For the optimization of chemical parameters of biodiesel production process from palm oil we used the most efficient method found in our previous work [12]. The Box–Behnken design was employed as a statistical means to optimize this production process [13].

In transesterification process methanol (alcohol) reacts with palm oil to form fatty acid alkyl esters (biodiesel) and glycerin. This reaction needs heat and sodium hydroxide as a strong base catalyst. Thus the important factors for the production of alkaline catalyzed transesterification reaction of palm oil (vegetable oil) are methanol, alkali (NaOH) and temperature. Hence, these factors are considered as the independent variables and their effects on calorific value of biodiesel are studied using Box- Behnken design of Response surface methodology (RSM).

The results of Box-Behnken design experiments for studying the effects of three independent variables, viz., methanol, NaOH and temperature on calorific value are presented in Table 2. These values are used for analysis of regression where Microsoft office excel tool "data analysis" is used. 95% confidence level is kept and the calculation of regression gives the coefficient values (A0 to A9 of Equation1). For each response different set of these coefficients were obtained. At the condition of the central values (zero level) i.e. 12.5 ml methanol, 0.4 gm NaOH and 55°C temperature the calorific value is 9297.221 kcal/kg.

From regression analysis all nine coefficients are used in making the response equation. The second order polynomial equations for each response were found as follows:

Where Y (c) is calorific value and X1, X2 and X3 are coded values for methanol, NaOH and temperature respectively.

Table 3 represents the ANOVA analysis of design variables where values of coefficients and p-values are represented for the three responses. The p-values are used as a tool to check the significance of each coefficient, which also indicate the interaction strength between each independent variable. A p-value less than 0.05 indicate that the factor interacted significantly with the response. It is observed that all the p values are smaller than 0.05, except methanol-alkali concentration and alkali concentration- temperature on calorific value. The p-value 0.00004 obtained from methanol concentration (X1 X1) indicates that methanol has greater impact on calorific value than alkali and temperature. The calculation of regression analysis also gives the value of the determination coefficient R2 represented in table 4.

Table 4. R2 values for the ANOVA analysis of the three response output.

The relationship between coded variables and responses can be better understood by examining the series of 3D line plots. These 3D lines display the effect of variation of two factors while the third is kept constant. Due to three coded levels and the three coded variables total nine combinations are possible for each response. The plots are created with the aim to observe optimum condition from predicted values. 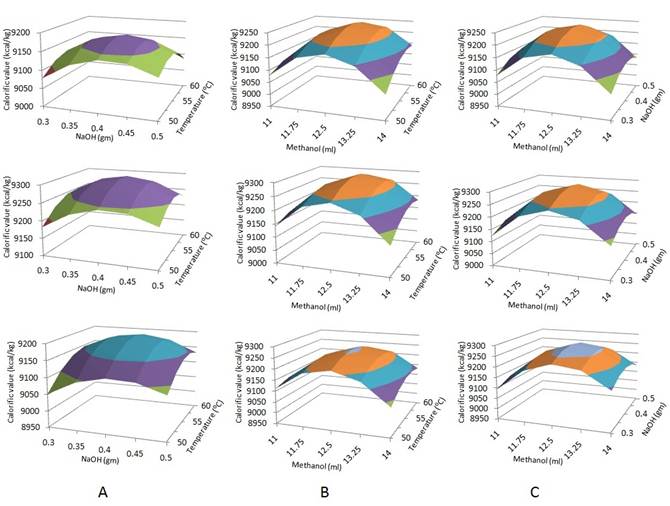 Validation of the process is done by selecting a few values randomly from the combinations. The results are presented in Table 5 shows that the experimental values are close to predicted value. NaOH concentration and temperature at central values yield maximum calorific value. Changes in methanol, NaOH concentration and temperature from central values minimized the calorific values which support the theory. As these chemical parameters produce higher calorific value, these parameters can be precise as the better production condition.

Figure 4. Effect of methanol and NaOH concentration on calorific value of palm biodiesel at constant 55°C.

In this experiment response surface methodology was used, and a quadratic polynomial equation was obtained for each value by multiple regression analysis. Total 15 combinations of methanol, NaOH and temperature were employed to develop Box-Behnken experimental design. Qualities of resulted products were evaluated in terms calorific value. It was found that 12.5 ml methanol/50 ml oil and 0.4gmNaOH/50 ml oil and 55°C temperature were optimum condition, where the calorific value of palm biodiesel is maximum 9297.206 kcal/kg. The optimum condition will be used to investigate the effect of methanol, alkali concentration and temperature on reaction time and on other fuel properties of biodiesel.

The authors acknowledge Khulna University, Bangladesh for the financial and technical support and Department of Chemical Engineering of Bangladesh University of Engineering and Technology for chemical analysis.