Abstract: Dye-sensitized solar cells (DSSCs) were fabricated using natural dyes extracted from roselle flowers and carica papaya leaves extract as photosensitizers. The photovoltaic perfomance of the DSSCs were evaluated under 100 mAcm-2 light intensity. The roselle (Hibiscus Sabdariffa) extract sensitized solar cell gave a short circuit current density (Jsc) of 0.180 mAcm-2, an open circuit voltage (Voc) of 0.470 V, a fill factor (FF) of 0.552, and an overall solar energy conversion efficiency (η) of 0.046%. Also, the pawpaw leaves extract sensitized cell gave a Jsc of 0.094 mAcm-2, Voc of 0.433 V, FF of 0.544 yielding a conversion efficiency of 0.022%. The cell sensitized by the roselle extract shows better sensitization, which was in agreement with the broadest spectrum of the extract adsorbed on TiO2 film. The sensitization performance related to interaction between the dye and TiO2 surface is discussed.

Attempts to create photo electrochemical solar cells by mimicking nature’s photosynthesis started in the 1970s with early efforts involving the covering of crystals of semiconductor titanium dioxide with a layer of chlorophyll [1].

Historically the dye-sensitization dates back to the 19th century, when photography was invented. The work of Vogel in Berlin after 1873 can be considered the first significant study of dye-sensitization of semiconductors, where silver halide emulsions were sensitized by dyes to produce black and white photographic films referred in [2].

However, owing to the electrons’ reluctance to move through the layer of pigment, the efficiency of the first solar cells sensitized in this way was about 0.01%. In the late 1980s, Scientists discovered that nanotechnology could overcome the problem [1]. The use of dye-sensitization in photovoltaic remained however rather unsuccessful until a breakthrough at the early 1990's in the Laboratory of Photonics and Interfaces in the École Polytechnique Fédérale de Lausanne (EPFL) Switzerland. By the successful combination of nanostructured electrodes and efficient charge injection dyes, professor Grätzel and his co-workers developed a solar cell with energy conversion efficiency exceeding 7% in 1991 [3] and 10% in 1993 [4]. This solar cell is called the dye sensitized nanostructured solar cell or the Grätzel cell named after its inventor.

Dye-sensitized solar cells (DSSCs) are the third generation of photovoltaic devices which is used for the conversion of visible light into electric energy. These new type of solar cells are based on the photosensitization produced by the dyes on wide band-gap mesoporous metal oxide semiconductors; this sensitization is produced by the dye absorption of part of the visible light spectrum [5].

The sensitization approach enables the generation of electricity with irradiation of energy lower than energy of the bandgap of the semiconductor. The progress of such devices occurred with the development of nanostructured semiconductor films onto which light absorbing dye molecules are adsorbed. Many efforts have focused on sensitizer dye, since dye plays a key role in harvesting sunlight and transforming solar energy into electric energy. Several organic dyes and organic metal complexes have been employed to sensitize nanocrystalline TiO2 semiconductors [6].

Naturally most flowers and leaves show various colours and contain several pigments which are easily extracted and then employed in DSSCs [7]. The leaves of most green plants dye has been investigated in many studies [8, 9, 10]. Anthocyanins are natural compounds that give colour to fruits and plants [11]. Roselle extract is rich in anthocyanins. It was reported that anthocyanin obtained from roselle are delphinidin and cyanidin complexes [12, 13]. The chemical structure of cyanidin and delphinidin in the Hibiscus Sabdariffa dye is shown in figure 4.

In this research work, anthocyanins extracts of roselle flowers, and chrorophyll extract from carica papaya leaves were the natural dyes used as sensitizers in the formed DSSCs. The performances of the formed DSSCs shows that, the roselle extract has higher photosensitized performance as compared to the pawpaw leaves extract.

The Hibiscus sabdariffa dye (commercially known as Roselle) belongs to the family Malvacae and is present in abundance through-out the world and has attained prominence as a jute substitute [14].

Pawpaw, belongs to the family of caricaceae. It is not a tree but a herbaceous succulent plants that posses’ self-supporting stems of spongy and soft wood [15].

2. General Composition, Function and Parameters of the DSSCs

The cell is composed of four elements, namely, the transparent conducting and counter conducting electrodes, the nanostructured wide bandgap semiconducting layer, the dye molecules (sensitizer), and the electrolyte. The transparent conducting electrode and counter-electrode are coated with a thin conductive and transparent film (such as fluorine-doped tin dioxide (SnO2)). The TiO2 surface is stained with a dye. TiO2 nanocrystals are used rather than a continuous layer to maximize surface area for light absorption. Between the electrodes is an electrolyte. Upon absorption of photons, dye molecules are excited as shown schematically in Figure 1. Once an electron is injected into the conduction band of the wide bandgap semiconductor nanostructured TiO2 film, the dye molecule (photosensitizer) becomes oxidized. The injected electron is transported between the TiO2 nanoparticles and then extracted to a load where the work done is delivered as an electrical energy. The electrons flow through the TiO2 onto the electrode, through an electric circuit, and then to the counter electrode. The electrolyte carries electrons back to the dye from the counter electrode. Electrolytes containing redox ions is used as an electron mediator between the TiO2 photoelectrode and the coated counter electrode. Therefore, the oxidized dye molecules (photosensitizer) are regenerated by receiving electrons from the ion redox mediator that get oxidized. 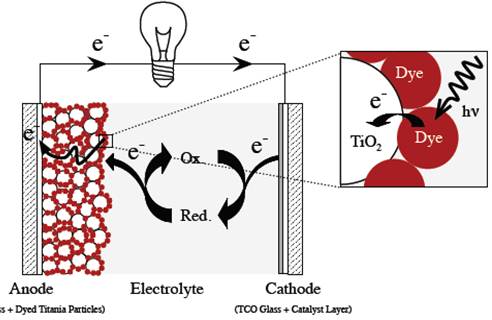 Fig. 1. Schematic of the structure of the dye sensitized solar cell.

3.1. Preparation of the Natural Dye

The leaves of carica papaya were grinded to small particles using blender with water as extracting solvent, and flowers of Hibiscus Sabdariffa were air dried till they became invariant in weight.

The dried flowers of Hibiscus Sabdariffa were left uncrushed because previous attempts proved failure to extract the dye from crushed samples due to jellification [16]. The method of heating in water (Aq.) was used to extract the dye. Distilled water was the solvent for aqueous extraction. 5 g of the sample (Hibiscus Sabdariffa) Flower was measured using analytical scale balance and dipped in 50 ml of the solvent heated to 100°C for 30 minutes after which solid residues were filtered out to obtain clear dye solutions.

The photoanode was prepared by first depositing a blocking layer on the fluorine doped tin oxide (FTO) glass (solaronix), followed by the nanocrystalline TiO2 (solaronix). The blocking layer was deposited from a 2.5 wt% TiO2 precursor and was applied to the FTO glass substrate by spin coating and subsequently sintered at 400°C for 30 minutes. The 9

The sintered photoanode was sensitized by immersion in the sensitizer solution at room temperature overnight. The cells were assembled by pressing the photoanode against the platinum-coated counter electrodes slightly offset to each other to enable electrical connection to the conductive side of the electrodes. Between the electrodes, a 60

m space was retained using two layers of a thermostat hot melt sealing foil. Sealing was done by keeping the structure in a hot-pressed at 100°C for 1 minute. the liquid electrolyte constituted by 50 mmols of tri-iodide/iodide in acetonitrile was introduced by injection into the cell gap through a channel previously fabricated at opposite sides of the hot melt adhesive, the channel was then sealed.

The current-voltage (J-V) data was obtained using a keithley 2400 source meter under AM1.5 (100 mw/cm2) illumination from a Newport A solar simulator. Scanning electron micrographs of the nanocrystalline TiO2 films are taken with Carl Zeis SEM. The absorption spectra of the dyes was recorded on Ava-spec-2048 spectrophotometer. The cell active area was 0.5 cm2. Thickness measurement was obtained with a Dektac 150 surface profiler. X-ray microanalysis was carriedout with INCA EDX analyzer. 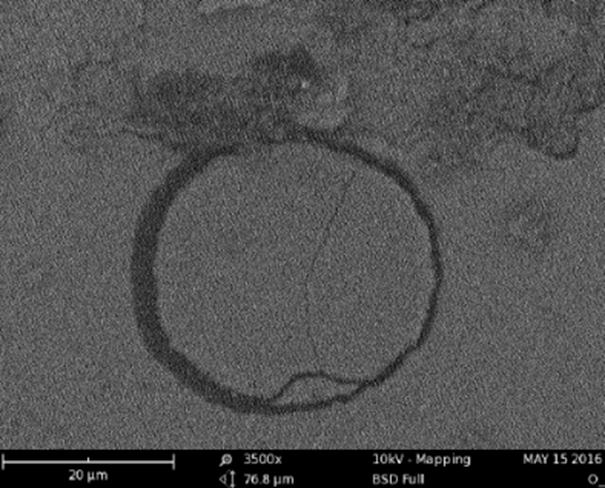 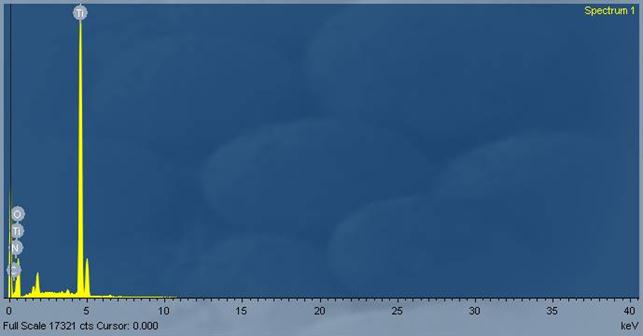 Fig. 2b. EDX image showing the elements present in the TiO2 compound.

Fig. 2b presents the EDX Image of TiO2.The elements present in the TiO2 are Titania, Oxygen and Nitrogen. Nitrogen is present due to the blower that was used to dry the TiO2 semiconductor. 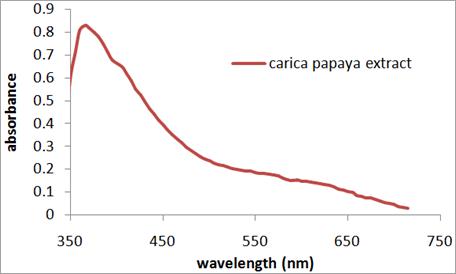 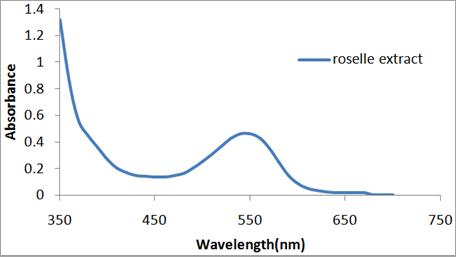 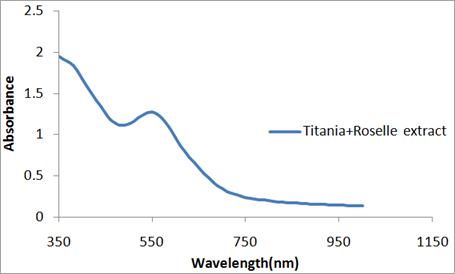 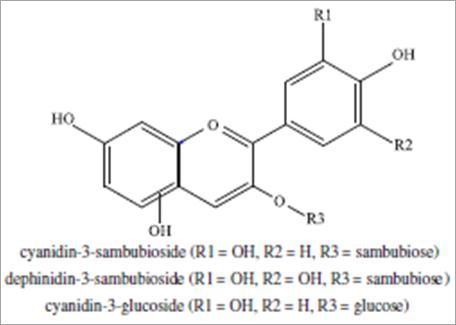 Fig. 4. Chemical structures of: cyanidin and delphinidin in roselle dye. 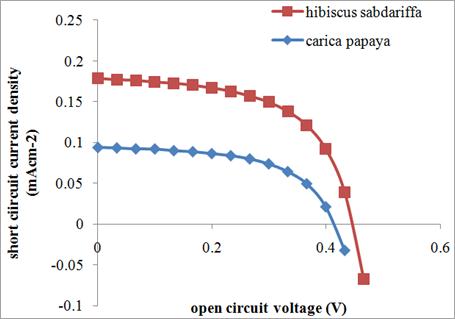 Fig. 5 shows the J–V (current density–voltage) curves of the roselle and pawpaw leaf extract under illumination.

Based on the J-V curve, the fill factor (FF) and solar cell efficiency (

) were determined using equations (1) and (2) respectively.

From the effective absorption area of 0.5 cm2 of the DSSCs, the averaged values of the light-to-current conversion efficiencies (η) of the DSSCs, shortcircuit photocurrent (JSC), open-circuit voltage (VOC), and fill factor (FF) were recorded as presented in Table 1. Obviously, the efficiency of the cell sensitized by the roselle extract was significantly higher than that sensitized by the pawpaw leaf extract. This is due to a higher intensity and broader range of the light absorption of the extract on TiO2 (Fig. 3c), and the higher interaction between TiO2 and anthocyanin in the roselle extract which leads to a better charge transfer. Moreover, anthocyanin in the roselle extract (cyanidin and delphinidin) has a shorter distance between the dye skeleton and the point connected to TiO2 surface compared to the chrorophyll extract from carica papaya leaves that shows lower charge transfer effect due to the limited absorbance of the dye in the visible spectrum [18]. This could facilitate an electron transfer from anthocyanin in the roselle extract to the TiO2 surface and could be accounted for a better performance of roselle extract sensitization [19].

When the results in this study is compared to a studiy performed under similar conditions by Ahmed et., al [20] who found Jsc of 0.17 mAcm-2, Voc of 0.46 V, FF of 0.41 and η of 0.033% for Hibiscus Sabdariffa respectively, our result is alitle higher. Also when compared to Kimpa et.al [21], where the conversion efficiency of the DSSC prepared by pawpaw leaf extract was 0.20%, with VOC of 0.50 V, JSC of 0.649 mA/cm2 and FF of 0.605, their result has better perfrmance. These differences may be attributed to differences in concentrations of phytoconstituents in different parts of the plants for the Hibiscus Sabdariffa dye [16], and due to the extracting solvent used for the case of pawpaw (distilled water for our studies and ethanol for Kimpa et., al).

Sensitization of a dye sensitized solar cell with extracts from roselle flowers was demonstrated. A similar cell sensitized with carica papaya leaves (containing a mixture of carothenoids and appreciable concentration of phenolic acid) extract shows a lower Jsc, Voc, FF and η. Using water as extracting solvent, the energy conversion efficiency (η) of the cells consisting of roselle extract and pawpaw leaves extract was 0.046%, and 0.022%, respectively. The roselle extract has higher photosensitized performance as compared to the pawpaw leaves extract. This is due to the better charge transfer between the roselle dye molecule and the TiO2 surface which is related to a dye structure, [18].

The authors are grateful to the physics advanced laboratory, Sheda Science and Technology Complex (SHESTCO), Abuja, Nigeria for the use of their research facilities.