Financial institutions, especially banks are very sensitive and important to the development and growth of many economies (Crotty, 2008). Banks through the performance of functions such as mobilization of savings, evaluation of projects and resource allocation, management of risk, monitoring of managers and facilitation of transactions create and increase value in the economy (Gumra, 2009; Bekuert et al, 2005). However, due to the highly sensitive nature of financial institutions which could lead to a potential damage on the economy (see Karbo and Adamu 2009; Becks and Levine 2004), banks have been under serious scrutiny by both academics and practitioners (Fujii, Managi and Matousek, 2014).Hence to ensure that financial institutions are functioning effectively, many reforms and regulations are introduced in different financial systems across the globe (see Bouyon 2014; Vickers 2012; Kumbirai and Webb, 2010;Gilbert, Calitz and Plessis 2009; Muride and Yaseen 2006). Bouyon (2014) argues that banking reforms and regulations have two main objectives: financial stability objectives and economic efficiency objectives.In recent times especially in Africa (where most countries are developing economies), information sharing regulations has become one of the relevanttools for credit risk management and credit extension to the poor (Luoto et al., 2007).

Ghana is reported to be one of the few economies in West Africa to introduction information sharingregulation along side with Nigeria and Seri-Leon (World Bank, Doing Business Indicators, 2012).The financial sector of Ghana has seen a number of reforms and regulationsintroductions to ensure financial stability and economic efficiency. Prominent among these reforms and regulations introduction in Ghana is the information sharing regulation in 2010. Banks in Ghana through Credit Referencing Bureaus (CRBs) share information on bank clients (both corporate and individual borrowers and depositors) to ascertain a complete and comprehensive worthiness status of bank clients to enable them (bank) arrive as a loan or credit decision. Theories and empirical studies in developed economies however suggests that information sharing improves credit risk (Brown and Zehnder 2007; Brown et al., 2009;Bennardo et al., 2009), credit growth (Djankov et al. 2007, Brown, Jappelli and Pagano 2009;Behr and Sonnekalb 2012) and profitability (Bennardo et al., 2009; Behr and Sonnekalb 2012).

Indeed, performance trends (see overview section) in the Ghanaian banking sector show improvements in bank credit growth, asset quality and profitability after the introduction of information sharing regulation.However, it is not clear if the improvements are due to randomness. This study therefore provides evidence from Ghana (a developing economy), on how bank industry performance differ before and after the information sharing regulation introduction. Also, the study cites fewer studies on the effect of reforms and regulations on banks in Ghana. Hence, this study contributes to the scanty body of empirical studies on reforms and regulations effects in Ghana.Again,given the positive effects (as argued in theory and empirical findings) of information sharing, this study is overly important as it can help the economy of Ghana to expand credit delivery to help alleviate poverty; hence attaining a developed market status.The study therefore seeks to ascertain if there is a significant difference in bank performance before and after the introduction of information sharing.

The Central Bank of Ghana was established in 1957 and charged with the responsibility of overseeing, supervising and regulating the operations of all Banks in Ghana. At the time of commencement only three banks (namely Barclays Bank, Standard Bank and Bank of Gold Coast) operated in Ghana. However after fifty-eight (58) years, the Ghanaian banking industry made up of twenty-seven (27) banks with foreign banks dominating the local banks in numbers. Presently, fifteen (15) out of the twenty-seven (27) banks are foreign banks while the remaining twelve (12) are local or domestic banks (Bank of Ghana 2014, Pricewaterhouse Coopers, 2014). To ensure the soundness and effective operation of the banking sector several reforms and regulations have been introduced to this effect. The table below summarizes the reforms and regulations introduced in Ghana from 2000 to 2010.

Table 1. Summary of Major Reforms and Regulations induced in Ghana from 2000 to 2010. 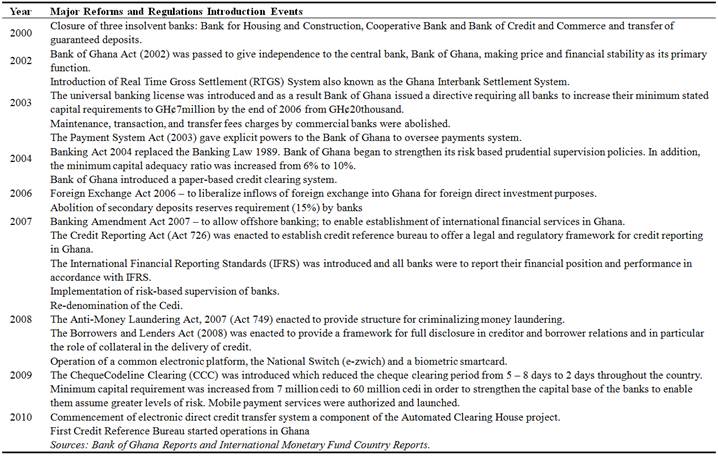 Finally, information sharing is argued to influence profitability in three ways. First, since credit losses are charged to the income statement of banks are expenses for the period this reduces the profit for the period. Second, since information sharing is done by specialized institutions (Credit Referencing Bureaus), these institutions are able to examine, evaluate and report accurate worthiness of bank clients at a lower unit cost through economies of scale and scope. This reduces the evaluation and monitoring cost of banks on borrowers and hence increases bank profitability. Third, since information sharing pressures bank borrowers to repay their loans (Padilla and Pagano, 2000; Brown and Zehnder 2007; Luoto et al., 2007; Bennardo, Pagano and Piccolo 2009) interest income of banks will increase and hence improving bank profitability.

The study employs yearly industry level data from Bank of Ghana Financial stability Reports covering the periods of 2006 to 2014.Using the financial ratios computed in these Reports, the study employs descriptive statistics measures such as mean, standard deviation, minimum and maximum values to draw inferences. Also, to test for statistical difference in bank industry performance before and after information sharing regulation to ensure that difference in statistical measures are not due to randomness and chance, the study employs student t-test. To test the statistical difference in means for the seven bank industry measures, 2006 to 2009 is classified as pre information sharing era and 2011 to 2014 also classified as post information sharing era. The hypothesis to be tested for all seven performance measures stated is as:

Where μ1 is the mean for pre information sharing era (2006 to 2009) and μ2 is the mean for post information sharing era. Inferences about the hypothesis are made by evaluating the statistic and critical values associated with the mean values. The null hypothesis is rejected if p-value ≤α while the alternate hypothesis is not rejected if p-value > α. Rejecting the null hypothesis will indicate that the means for pre and post information sharing eras are different; hence leading to a possible effect of Information sharing on bank performance. Financial ratios are used for a number of reasons. First, Hemple et al. (1994) and Dietrich (1996) suggest that financial ratios give a clear picture of events and early signs of danger for effective planning to correct the perceived danger. Second, size effects are avoided by the use of financial ratios since they are points of concern for the t-test tool (See Samada 2004). Third, since non-linearity is a key consideration under t-test statistical tool, the employment of financial ratios curtails such non-linearity issues (see Brooks 2008; Wooldridge 2008).

The variable selection for this study is principally based earlier empirical findings on information sharing and key bank performance measures employed in assess banks in Ghana by the Bank of Ghana. Since earlier empirical studies suggest that information sharing affects bank credit growth, asset quality and profitability, the study selects variables of such indications from Bank of Ghana Financial Stability Reports to achieve the objectives of this study. These performance measures are discussed below.

Asset quality is an indicative measure showing how well the banking industry is free from credit risk exposure emanating from the core business of banking. The study employs three different asset quality measures used by the bank of Ghana. These measures are discussed below:

Bank profitability is captured in this study with three key profitability measures used in most empirical studies. They include net interest margin, return on equity and return on assets. They are discussed in brief.

NIM is a bank profitability indicator and computed as interest income minus interest expenses divided by total assets. This shows the proportion of bank core or main income generated by the assets of the banks. Higher values of NIM are desirable as it indicates profitable and efficiency use of bank assets.

ROE is calculated as net income divided by total bank equity or capital. This bank profitability measure indicates the return to shareholders or equity-holders of a bank. High values of ROE are indications for shareholder value maximization and high values are preferred to low values.

ROA is a bank profitability measure that is computed as earnings before interest and tax divided by total assets. This profit measure also indicates how well the assets of banks have been employed to generate income. It shows the reward or return to all stakeholders (including debt-holders, equity-holders and the State) and higher values are always preferred to lower values.

5.1. Industry Performance Before and After Information Sharing Introduction