The Non-audit Business Impact on Audit Independence and Its Research

In 2001, the Enron incident happened, as one of the five famous accounting firms An XinDa office provide to Enron Corp not only audit services but also consulting business for many years, the non-audit business income is far greater than the audit income, which led to the public criticism and the solution of the body. After Enron incident, the United States promulgated the "Sarbanes Oxley act", for the accounting firms to provide non-audit services and audit the company to maintain the independence of audit [1].

2.1. The Characters of Non-audit Services and Audit Independence

Non-audit business is relative to the audit service and it provides the accounting firm with a certain fee for a variety of services such as tax consulting, management consulting, legal advice, and even technical advice, etc. Audit independence is the soul of the audit, which is the essential feature of the audit, and it is the cornerstone of the survival and development of the audit profession. Independence audit is a state of mind, which is not affected by external pressure and the auditors couldn’t have any special interests with principal businesses and individuals.

2.2. The Interactive Relationship Between Non-audit Services and Audit Independence

An empirical study on the influence of non audit services on audit independence [J], 2007Modern market economy is composed of private economy and public economy, which is mixed economy. As a part of them, registered accountants industry has the nature of the social services and independent industry, through the audit, audit report out. Due to the special nature of the CPA profession, the audit report has the dual attributes of both public goods and private goods. At the same time, the public is also reflected in the audit business. If the audit opinions issued by the certified public accountants are not true or fair, they will affect the judgment of the public on the company, harm the interests of the public, and even disrupt the economic order of the society. Therefore, the CPA must fulfill its social responsibility, so as to realize the goal of the society, so it has the character of public goods. Audit products also have the nature of private products, this is because they are the main product of the CPA profession and the main source of the CPA industry. Accounting firms also need to consider the cost efficiency and achieve their own survival and development through the profit, which has the nature of the enterprise.

2.2.2. The Explanation Based on the Theory of Principal Agent

In the Modern Corporation, the fundamental characteristics of corporate governance structure are the separation of ownership and management. The separation of two rights makes the operator become the firm's decision makers, which improve the efficiency of enterprise management and produced the "agency cost". Because the owner pursuit the maximization of enterprise value, and the operators pursuit individual utility maximization. So the two different aims produce the issue of "agency cost".

In addition, due to the information asymmetry between the principal and the agent, the principal may misunderstand the behavior of the agent. Therefore we need independent of both the third party audit coordination conflicts of interest between the party, the agent and commission, and thus effectively attestation, restraint and incentive to the agent and to promote the maximization of interests of both balanced, CPA fits well with the requirements for the third party [2].

However, non-audit services broke the original balanced state among client agent, certified public and accountants. The client agent and accountants which originally have no interests relation become two parties of the interests, making the original independent third party to the principal and the agent become into a double agent who ( as the Figure 1). Therefore, certified public accountant (CPA) which is the original one-way commission become multiple principal and register accountants and managers into stakeholders, resulting in a conspiracy of possibility and harming the principal interests of people (owner).

Figure 1. The relationship between the Audit Commission and the purchase of non audit business services.

Non-audit services is the inevitable outcome of the development of the times, in a certain extent consistent with Pareto improvement, Pareto improvement is that nobody got worse, but some people get better [3], and if non-audit services could carry out appropriately, achieving both help accountants firm profitability, and improve enterprise depending on their own, and help enterprises to achieve more truly and fairly reflect its financial situation this win-win situation. Under the function of the market, the rational and effective allocation of resources through independent and voluntary forms could achieve Pareto improvement and improve the efficiency of. However, if the implementation of non-audit business is not appropriate, it will have the opposite effect. As shown in the figure, the non-audit business in the ideal case, the efficiency can be moved from D point to point P1, to achieve the audit business MRS=MRT (Marginal rate of substitution = marginal rate of conversion). However, if in the case of non-ideal, it is possible to achieve a negative Pareto efficiency, so that the efficiency of P1 points to move to the point of D, resulting in waste of resources and inefficiency. 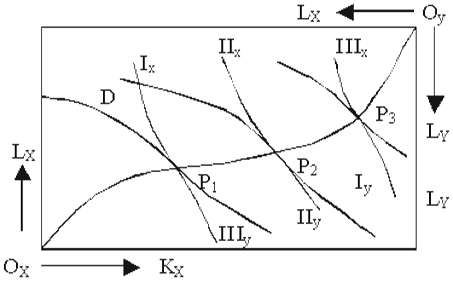 3. The Influence of Non-audit Business on Audit Independence

According to the theory of knowledge spillover effect, by providing non-audit services the CPA could further contact and understand the customer enterprise production operation and management of the situation, which to some extent will strengthen the audit effectiveness and reduce the audit risk. Certified public accountants provide non-audit services and obtain knowledge, which may be transferred to the audit service overflow, and thereby reducing the cost of audit services and improving audit efficiency. At the same time, audit services can make CPA correctly evaluate the client's internal control system, financial accounting system and the condition of corporate governance, in order to provide customers with a more focused, more effective non audit services.

Non-audit business enterprise management consulting can make the certified public accountants in a more favorable position in the conflict and coordination with customers. Goldman and Barlev (1974) pointed out that the accounting firm provide for enterprise customers more non routine service, there will be stronger customer dependence of CPA. The CPA will be able to grasp more initiative in the interests of both sides of the conflict and coordination. Therefore, the development of non-audit services to a certain extent could enhance the status of certified public accountants and maintain its independence.

Nowadays, the audit service is competing viciously, which leads to the low income of audit services, forcing the accounting firms to seek new growth points. If non-audit services may get too high income, leading to the accounting firm for the customer the economic strong dependence. If the CPA disagrees with the customers, considering their own interests, in order to seize the opportunity and get more revenue it probably compromises that the issue of the customer needs of the unreasonable audit opinions.

The public believes the qualification of Certified Public Accountants and has a high degree of recognition of the audit report issued by the public. Due to the non-audit business involves a large number of enterprise management, registered accountants to the corporate management advisory capacity may make public remain sceptical with the independence of Certified Public Accountants, even CPA indeed maintain a substantial independence, but public awareness is registered accounting division in favour of customers for the company and the effectiveness of audit report will be significantly reduced.

Based on the above theory, this paper puts forward the hypothesis: the non-audit business in China has no substantial impact on audit independence.

4. The Hypothesis of Non-audit Business to Audit Independence

4.1. The Hypothesis of Research

The sample involve listed companies annual financial data and firm ranking data is from in China's government supervisor, including official website of China registered accountant association website and the huge influx of information network announced 2012 to 2014, the annual report information by family sorted access, according to disclose the accounting firm audit of listed companies audit information, to obtain a total data of 176 listed companies. And classify the 176 listing Corporation by the industry. In addition, the process of statistical analysis in this paper uses Excel Microsoft and SPSS12.0 software.

5.1. Descriptive Statistics on the Types of Audit Reports

Table 3. Descriptive statistics on the impact of the characteristics of listing Corporation on the types of audit reports. [4]

From the above data, we can see that the linear relationship between variables is not obvious, the correlation between variables will not affect the regression results, you can use two binary logistic models for analysis.

We know that the audit opinion translated CPA to enterprise financial statements of fair, legal and accounting processing consistency evaluation and was affected by many factors. Therefore, it is necessary to control the influence of other factors. This paper uses Logistic regression model to further analyze.

The regression results of the model show that:

In this paper, using the provisions of the China Securities Regulatory Commission disclosed to the receiving CPA audit services in the A-share listed companies as the research objects from 2012 to 2014, referring related literature articles and using binary logistic regression model to analyze the independence of audit. Finally we arrive the conclusion that there is no evidence showing that accounting firms which provide non-audit services could affect the audit independence in China. This should attribute to the regulation that China promulgated the "public offering of securities company information disclosure quiz 6 -- payment accounting firm compensation and disclosure" requires listed companies in the annual report about other costs beyond the financial audit fees should be disclosed, which has certain effect in a certain extent.

Based on the above conclusions, I want to give several suggestions. Firstly, encourage and guide accounting firms to develop non-audit services and thus adapting the international development. Besides, enlarge the scope of business to increase the ability of competing. Secondly, improve the non-audit services supervision, and we could establish the supervision institute to supervise the audit and non-audit services and thus giving punishments to accounting firms and CPA which violent the independence principle. Thirdly, increase penalties. If the supervision institute find the illegal activities, they should give the CPA and accounting firms severe punishments and its punishments should far greater than the benefits [5]. Finally, improve the CPA’s Professional ethics level. They are supposed to get Professional ethics training and exams, making CPA insist the independence principle all the time and maintain self-discipline in the industry.