For ground meat shelf life prolongation, synthetic chemicals have been traditionally used to inhibit resident pathogenic and spoilage microorganisms in refrigerated products. The increasing consumer concerns of potential health risks associated with some of synthetic preservatives has led researchers to evaluate the opportunity of using natural bio-preservatives such as Lactic Acid Bacteria (LAB) selected for their inhibitory activity towards undesirable microorganism. [1,2]. Lactic acid bacteria produce a wide range of inhibitory compounds such as organic acids, hydrogen peroxide, diacetyl and bacteriocins and thus, expanding shelf life and increasing food safety and have GRAS (Generally Recognized As Safe) status. [3-7]. The inhibitory actions of LAB toward food-borne pathogens and spoilage organisms in non-processed foods occur during entire storage period by continuous production of inhibitory compounds instead of a one-time reduction, as occurs with antimicrobial substances interventions. It has been shown that for bio-preservation the most effective are LABs able to produce hydrogen peroxide at refrigerated temperatures in absence of growth [8-10].

Most raw foods are contaminated with pathogenic and spoilage microorganisms. Ground beef products are common sources of E. coli O157:H7 and its reduction is an important concern in the beef industry. It was shown LAB impact on E. coli O157:H7 viability in ground beef and the sensory properties of these products [6,11,12]. The species L. delbrueckii subsp. lactis more of all used in food preservation, but hydrogen peroxide production is variable amongst strains [13,14]. But the use of limited number of LAB strains may cause decreasing of treatment efficacy due to accumulation of deleterious mutations and/or adapting of pathogens to antibacterial substances which are produced [3]. In order to enhance biopreservation efficacy LAB mutant producing high amount of antimicrobial substances should be selected [15-17]. Because hydrogen peroxide production plays the major role in elimination of the pathogens at refrigerator storage, it levels should be assessed for newly selected strains. There aren’t methods for direct selection of antimicrobials producing mutants, so we need in methods to enhance the likelihood of this mutants occurrence by help of mutations affecting global regulatory network of cell. Enhancement of secondary metabolites yield remains great challenge in biotechnology. Earlier we successfully used ribosome and RNA polymerase mutations for improvement of technological characteristics and enhancement secondary metabolites (polysaccharides, aroma substances, etc.) yields of dairy starters and other industrial microorganisms [18,19].

There are fundamental connections between rifampicin resistance, RNA polymerase structure and function and global gene expression. Resistance to rifampicin is associated with mutations in the gene coding for the beta subunit of RNA polymerase (rpoB) [20, 21]. Rif mutations of RNA polymerase have been found involved in a variety of physiological processes and possessing pleiotropic effects, including: cell growth [22-24]; the ability of mutants to support the growth of various bacteriophages; the ability to maintain the F' episome; interaction with other genes mutant alleles; uracil sensitivity [22]; exopolysaccharides oversynthesis and thermosensitivity of LABs [18, 19]. A spontaneous rif mutation of Saccharopolyspora erythraea caused slow-growth and stimulated erythromycin production [25].

L. acidophilus GH 201 cells grown at 37°C in MRS (OD 0.6) were harvested by centrifugation at 12,000 x g for 15 min and resuspended in PBS. Aliquots of cell suspensions (2 ml) were poured into sterile petri dishes and irradiated with UV light (254 nm) for 5, 10, 20 and 40 sec. Irradiated cells diluted tenfold into fresh MRS broth and were grown at 37°C for 4 h to permit 3 - 4 division cycles. For obtaining rif mutants cells were plated on MRS agar containing 100 µg/ml of rifampicin and incubated at 37°C till resistant colonies appearance.

Bacterial count in liquid media was made using standard methods [26]. For enumeration of E. coli and lactobacilli in ground beef 1 g infected meat sample was inoculated in 9 ml of sterile physiological, homogenized, made serial ten-fold dilutions and plated on Tryptose and MRS agars for determination of E. coli and LAB counts, respectively.

Agar disk diffusion method was used to evaluate the antimicrobial effect of LAB suspensions. E. coli O157: H7 culture grown in NB broth for 18 h at 37°C diluted to concentration of 107 cells/ml and 0.1 ml spread onto Tryptose agar. The paper discs (diameter, 5 mm) were soaked with LAB culture liquids and placed on the test culture lawn. After 2 h exposition in cold the plates were incubated at 37°C for 18 h and examined for size of clear inhibitory zones.

2.7. Quantification of Antimicrobial Activity of LAB Cultures in Cold Cultivation

Lactobacilli were grown in MRS broth for 18 h at 37°C divided in four 10 ml aliquots, centrifuged at 12,000 × g for 10 min and each pellet resuspended in 10 ml of cold medium; sodium phosphate buffer and beef broth and incubated at 5°C. Every two days for 7 days and then each week antimicrobial activity, hydrogen peroxide amount, OD600 and pH of the cell cultures were determined.

For evaluating rif mutants antagonistic activity against of E. coli O157:H7, the pathogen overnight culture was diluted in 200 ml of fresh NB to obtain cell concentration of approximately 105 CFU/ml, divided in two equal portions and supplied LAB in ratios 1: 100 and 1: 10. Both samples stored at 5°C and subjected to microbial analysis on days 0, 1, 3, 5, and 7.

2.9. Agar Based Solid State Cocultivation of LAB with Pathogen

Cells from overnight cultures were harvested by centrifugation, washed twice in physiological saline, impregnated by paper disks and placed on E. coli O157:H7 lawn on T-agar kept for 24 hours at 5°C then transferred at 37°C and inhibitory zones around disks were examined on the next day.

150 g of fresh ground beef was inoculated with E. coli O157:H7 to obtain a pathogen concentration of approximately 105 CFU/g and divided into three equal portions. LAB cultures were prepared as described previously and at final concentrations of 107 CFU/ml added into two samples of infected ground beef mixed and packaged in vacuum polyethylene bags. The control portions of the ground meat with E. coli O157:H7 were processed in the same manner. All samples were kept at 5°C and sub­jected for microbiological analysis on days 0, 1, 3, 5 and 7.

Earlier we have shown that the maximum yield of UV induced resistant to antibiotics mutants in LABs occurs at survival about 0.1% [27]. For maximum yield of rif mutants L. acidophilus GH 201 cells suspension was irradiated by UV light for 20 sec giving survival ~ 0.1 % and plated on T-agar containing 100 µg/ml rifampicin. The UV induced yield of rif mutants was 3.2 ± 04 ppm which about 10 – 20 folds higher than of spontaneous yields.

The dominant inhibitory factor produced by lactobacilli at refrigerating temperatures was identified as hydrogen peroxide [13,28,30].

Among tested overnight cultures of 300 rif mutants grown in MRS broth by Merckoquant Peroxide Test strips, four mutants expecting for active H2O2 formation were isolated. The mutants were examined for production of antimicrobial substances at 5°C by Tryptose agar based solid-state cultivation on E. coli O157:H7 lawn. The growth inhibitory zones of pathogen around disks impregnated by washed cells of rif mutants presented in Figure 1. 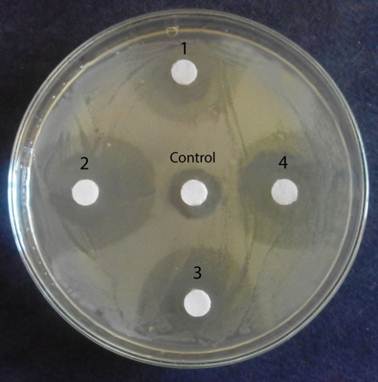 The larger inhibitory zones formed around disks impregnated by cells of LR-105, LR-136 and LR-181 mutants. The storage in refrigerator more than one day was not significantly reflected on the size of inhibitory zones. For one-day solid-state cultivation LAB cells produced as much antimicrobial substances as in submerged cultivation for about three days, probably due to stimulation of hydrogen peroxide production by available oxygen. 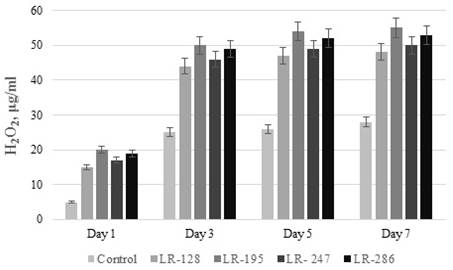 During the entire period of storage at 5°C live cells count and beef broth culture pH were monitored (Table.1).

Table 1. L. acidophilus GH 201and rif mutants viability and pH in BB during storage at 5°C.

No significant differences were found in the population levels of LAB cultures during over 7 days storage at 5°C indicating that cells reproduction was not necessary for hydrogen peroxide formation. These findings come in accordance with the observations of Amezquita and Brashears 2002, Ruby and Ingham 2009 who suggested that the production of inhibitory metabolites can occur by LAB during storage in the absence of growth [1,31].

3.5. Antagonistic Action of LABs on E. coli O157:H7 in Submerged Cocultivation at 5°C

L. acidophilus GH 201 and most active rif mutant LR-195 about 107 CFU/ml were separately added into NB broth along with E. coli O157:H7 105 CFU/ml in order to determine their comparative antagonistic action against the pathogen at 5°C. The total number of E. coli O157:H7 cells in both treatments were determined on days 0, 1, 3 and 5 by plating appropriate dilutions on Tryptose agar and incubation at 37°C for 24 hours. 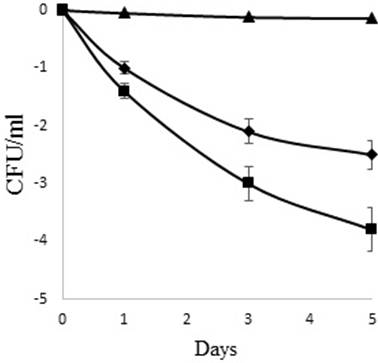 L. acidophilus GH 201 and rif mutant LR-195 were tested in packaged ground meat for their ability to reduce the viability of Escherichia coli O157:H7 during storage at 5°C in plastic vacuum bags. Each ground meat sample was infected with 105 CFU/g of E. coli O157:H7 and treated with 107 CFU/g of LABs. Samples were analyzed for E. coli O157:H7 survivors and lactic acid on days 1, 3, 5 and 7. 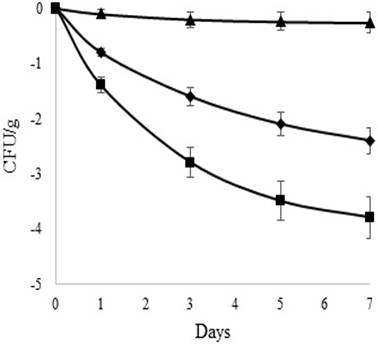 Towards the end of ground meat vacuum storage E. coli O157:H7 quantity was 3-4 log lower than those in the control. The impact of rif mutant on the pathogen was significantly higher of L. acidophilus GH 201.

Growth of LABs in a fresh meat held at refrigeration temperature is not desirable because it would lead to premature spoilage of the product. The count LABs in treated samples for 7 days wasn't significantly changed. It was revealed that the application of rif mutant hasn’t any influence on sensory characteristics of ground beef, moreover promote expanding of shelf-life due to inhibition of psychrophilic spoilage microorganisms which is in agreement with other authors [6,34,36].

It was shown that hydrogen peroxide producing ability of LAB at 5°C is strongly dependent on nutrition media composition used for their prior propagation as well as media for sub cultivation at refrigeration temperatures. For largest amount of hydrogen peroxide production LAB cells must priory propagated in rich medium and then transferred in sodium phosphate buffer at 5°C [1,32]. Cell suspensions in phosphate buffer without glucose showed high accumulation of H2O2 in contrast to phosphate buffer containing glucose where produced undetectable amounts of H2O2. High concentrations of glucose appeared to inhibit the production of H2O2 by the cells [29,32,37]. In our experiments at the first time we used beef powder broth very close to the ground beef by composition as model for evaluation H2O2 production and found yield significantly higher than in phosphate buffer.

A characteristic feature of rif mutations is pleiotropy of their phenotypic realization. They are able to cause misreading of genetic information at the level of transcription over whole genome that brings to simultaneous alterations of large spectrum phenotype features of bacteria e. g. colony morphology, growth rate, sensitivity to temperature, requirements in growth factors, production of secondary metabolites etc., by global changing of transcriptional profile [38-43].

Thus, it was possible to show that mutations deter mining resistance to rifampicin may be an efficient instrument for selecting strains of lactobacilli with enhanced yield of antimicrobial substances including hydrogen peroxide.

Resistant to rifampicin mutants of mutants L. acidophilus GH 201 produced significant amounts of hydrogen peroxide at 5°C in beef broth without of growth. They exert higher inhibitory action against E. coli O157:H7 and practically fully eliminate the pathogen bacteria from ground beef at refrigeration temperatures. Rif mutations can be successfully used as a tools in biotechnology for improving preservative properties of LABs intended for commercial applications.

The authors are thankful to SPC "Armbiotechnology" NAS, for facilitation and technical support on this work.