Opuntia ficus-indica as a Source of Bioactive and Nutritional Phytochemicals

Abstract: Cacti are known for their minimum water requirement. They grow extensively in arid lands, where they were traditionally used for both human and animal food. Opuntia ficus-indica, commonly referred to as prickly pear or nopal cactus, was known as a medicinal plant, owing to its rich composition in polyphenols, vitamins, polyunsaturated fatty acids and amino acids. This makes cactus pear a promising crop for commercial food applications. Recent scientific investigations showed thatcactus products may be efficiently used as a source of foods additives, mainly fibre, colorants and antioxidants. Tablets, cookies and other forms of fibre derived from cactus cladodes are currently marketed in severalAmerican countries. This review details the main functional phytochemicals characterizing different tissues of Opuntia ficus-indica.

Cacti are the most conspicuous and characteristic plants of arid and semi-arid regions. Opuntia ficus-indica (L.) Mill., commonly called prickly pear or nopal cactus, belongs to the dicotyledonous angiosperm Cactaceae family which includes about 1500 species of cactus. Cacti are known for their ability to thrive under environments recognized as stressful for most plant species, and are widely used to prevent soil erosion and to combat desertification [1,2].

Opuntias have been exploited as a cheap and alternate source of food suitable not only for humans but also for animals. In addition, they have been cultivated as ornamental crops [3]. Two parts of the plant have been used for food: the "nopal" or cladodes and the fruits or the prickly pears. Cladodes are consumed in Mexico as salads [4] whereas fruits are widely eaten fresh, dried or preserved in jams, syrups or processed into candy-like products [4,5]. Opuntia fruits are fleshy and elongated berries, varying in shape, size and color (orange, yellow, red, purple, green, white) and have a consistent number of hard seeds [6].

Opuntia ficus-indica was known to contain several pigments and bioactive molecules having nutritional and medicinal desirable properties [7-17]. Based on the chemical structure of their chromophore, pigments can be classified into (a) Chromophores with conjugated systems, such as carotenoids, anthocyanins, betalains, caramel, synthetic pigments, lakes; and (b) Metal-coordinated porphyrins including myoglobin, chlorophyll, and their derivatives.

Based on this backdrop, the main objective of the present review is to focus on the bioactive molecules from Opuntia ficus-indica, their structure-activity relationship, as well as the nutritional value of this plant.

2. Bioactive Phytochemicals and Their Antioxidant Activity

"Polyphenols" (or phenolic compounds) is a generic term that refers to more than 8000 compounds widely dispersed throughout the plant kingdom [27]. Polyphenols can be devided into four main classes: flavonoids, phenolic acids, stilbenes, and finally lignan and suberin. The basic structure of some Opuntia polyphenols is presented in Figure 1. 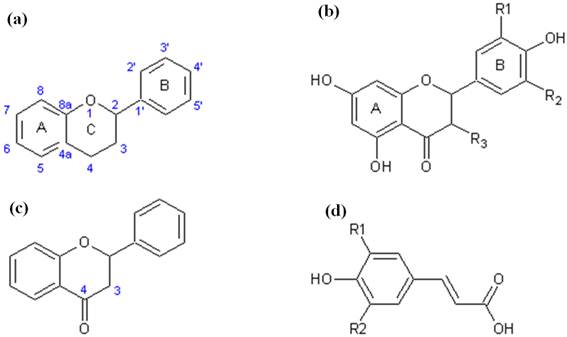 Polyphenols are present in different Opuntia tissues at various concentrations, as detailed in Table 1.

Flavonoids and phenolic acids are the main polyphenols of Opuntia ficus-indica. Flavonoids are known for their antioxidant activity. They are able to interact with lipids, proteins and carbohydrates to inhibit their oxidation [41]. Flavonoids can protect from injury caused by free radicals in various ways. One way is the direct scavenging of free radicals according to the following equation (1):

Quercetin and silibin inhibit xanthine oxidase and cytochrome activity, thereby resulting in decreased oxidative injury [42,43]. Another possible mechanism by which flavonoids act is through interaction with various enzyme systems. When reactive oxygen species are in the presence of iron, lipid peroxidation results. Specific flavonoids, such as quercetin, are known for their iron-chelating and iron-stabilizing properties [44]. Direct inhibition of lipid peroxidation is another protective measure [45]. Another interesting effect of flavonoids on enzyme systems is the inhibition of the metabolism of arachidonic acid [46]. This feature gives flavonoids anti-inflammatory and anti-thrombogenic properties.

Carotenoids are lipid-soluble C40 tetraterpenoids synthesized by plants, algae, fungi, yeasts and bacteria. The majority carotenoids are derived from a 40- carbon polyene chain, which could be considered the backbone of the molecule. Opuntia carotenoids are generally formed from eight C5 isoprenoid units joined head totail, except at the center, where a tail-to-tail linkage reverses the order and results in a symmetricalmolecule [47]. According to their structure, carotenoids can be classified into (a) carotenes or hydrocarbon carotenoids (such as β-carotene) which contain only carbon and hydrogen atoms (Figure 2), and (b) oxygenated carotenoids which are derivatives of these hydrocarbons or xanthophylls which carry at least one oxygen atom (such as zeaxanthin, lutein, spirilloxanthin, echinenone, and antheraxanthin) [48].

Xanthophylls and carotenes were proved to be efficient quenchers of singlet oxygen (1O2) and peroxyl radicals [54,55]. This physical quenching is related to the number of conjugated double bonds present in the molecule which determines their lowest triplet energy level. ß-Carotene, zeaxanthin, cryptoxanthin, as well as α-carotene were reported to be belong to the group of highly active quenchers of 1O2 since they have triplet energy levels close to that of this radical, thus enabling energy transfer. The most efficient carotenoid is the open ring carotenoid lycopene [56,57]. Due to their lipophilicity and specific property to scavenge peroxyl radicals, carotenoids are thought to play an important role in the protection of cellular membranes and lipoproteins against oxidative damage [58]. They are able to deactivate peroxyl radicals and to form a resonance stabilized carbon-centered radical.

Betalains due their antioxidant activity to their phenolic hydroxy groups (Equation 2) in addition to their imino and tetrahydropyridine groups. The common electronic resonance system supported between the two nitrogen atoms allows creating a stable carbocation upon an electron abstraction.

The redox potential of betanin and indicaxanthin were evaluated respectively at 0.4 V and 0.6 V, indicating that these two pigments are able to donate easily their electrons. At very low concentrations, betanin was demonstrated to inhibit lipid peroxidation and heme decomposition [66]. Betanidin was the most potent antioxidant against peroxyl radical and nitric oxide [67]. Moreover, indicaxanthin was shown to be less effective than betanin in radical scavenging reactions [68]. Betanin was also shown to act as an oxidation retarder, and additive effects with α-tocopherol were reported for both betanin and indicaxanthin [69,70].

β-sitosterol is the major sterol extracted from Opuntia fruits, peel and seeds. Its concentration vary between 6.75 and 21.1 g/kg [22,73]. Other sterols such as stigmasterol and lanosterol are present in small quantities (Table 3). Chromatographic analyses of total lipids extracted from cactus peels show that palmitic acid (C16:0) and linoleic acid (C18:2) are the major fatty acids (Table 2). In cladodes, palmitic acid, oleic acid (C18:1), linoleic acid and linolenic acid (C18:3) contribute 13.87, 11.16, 34.87 and 32.83% of the total fatty acid content, respectively (Table 3).

The main carbohydrates reported in Opuntia fruits are fructose and glucose in a ratio at about 1:1 [75]. The polysaccharides from cactus pear peel are characterized by sugar constituents typical of pectin with high and medium degrees of esterification of galacturonic acid residues. Cactus pear peels contain a slightly higher content of sucrose (2.85%) and galacturonic acid (2.23%), followed by stachyose (1.81%), mannitol (1.48%), sorbitol (0.71%) and arabinose (0.05%) [53]. Glucose and galacturonic acid were the main sugars of Opuntia cladodes. HPLC analysis revealed the presence of rhamnose, fucose, arabinose, xylose, mannose and galactose at different concentrations [76].

Total proteins in cladodes vary from 4 to 10%. They are represented mainly by glutamine, leucine and lysine. Phytochemical investigation of Opuntia fruits revealed a great number of amino acids. The two predominant amino acids are proline and taurine, which represent 46% and 15.78% of the total amino acid content, respectively. Interestingly, the presence of eight essential amino acids was reported (Table 4). Proteins and amino acid contents of cactus pear peels need to be elucidated.

Cactus fruits and peels are rich in magnesium (up to 59 and 195.76 mg/100 g respectively) and calcium (up to 98.4 and 188.58mg/100 g), which makes prickly pears useful in the prevention of osteoporosis and cramps, respectively. In addition, low levels of sodium, potassium, iron and phosphorus were reported [79,80]. Whilst high levels of calcium, magnesium and potassium are used for energy and to uphold the mineral pool during periods of physical exhaustion, low levels of sodium and chloride are preferred for preventing high blood pressure [81]. Consequently, cactus pear may be used to ensure mineral fortification of diets. Similarly, cladodes contain high levels of calcium, calcium oxalate and magnesium, but at lower concentrations than those registered for fruits (Table 5).

Saenz [84] reported the potential use of cactus cladodes as a new source of fiber in human diet. Cactus pear cladodes were shown to have high fiber content and potential health benefits. The moisture content of tender young O. ficus-indica pads is about 92%, along with 1–2% protein, and 0.8–3.3% pectin, a soluble fiber included in the 4–6% total fiber [85]. Dried cladodes powder contains about 43% fibre, 28.5% of which are insoluble [86]. Interestingly, it is important to report that fibers are classified into two groups: hydrosoluble and insoluble ones. Soluble fibres include mucilage, gums, pectin, in addition to hemi-celluloses. They ensure the reduction of blood glucose and cholesterol, as well as the stabilization of intestinal food transit. Insoluble fibres are composed mainly of cellulose, lignin, and a large portion of hemicelluloses. They are known for their capacity to retain water, favor ionic exchange, absorption of bile acids, minerals, vitamins and other interaction with microbes [87-89].

The therapeutic properties of Opuntia ficus-indicaare due its bio-functional phytochemicals and cladodes polysaccharids. Research on cactus pear has been focused mainly on cladodes and fruits. Although they is a scarce scientific works dealing with cactus pear peels, this latter contains higher bioactive molecules and minerals contents than fruits and cladodes. Indeed, cactus fruit peels could be very suitable as a natural food additive, natural colorant and natural antioxidant. However, further investigations are required to optimize the extraction of bioactive phytochemicals from cactus peels, and to describe their application in food industries.