Abstract: Two types of operation means "SBBR reactor alone (Sreactor)" and "adding zeolite powder into SBBR reactor (Z-Sreactor)" were used to treat municipal wastewater. The test results showed that zeolite added in reactor could improve the activity of the activated sludge. Due to the combination of zeolite adsorption for NH4+-N enhanced simultaneous nitrification andde-nitrification (SND), a higher nitrogen removal was observed in Z-S reactor compared to the S reactor, and the addition of zeolite powder is helpful to inhabit sludge bulking. Inaddition, through long-term parallel shock load test, it was found that the zeolite added in reactor could enhance the ability of activated sludge inresisting the shock load of organics and ammonium.

Ammoniacal nitrogen present in effluent sarising from the treatment of municipal wastewater can promote eutrophication in receiving waters and increase toxicity to aquatic life [1–4]. Hence, the removal of ammonium from wastewater is of great importance in the control of nitrogen pollution [2].

The need for cost-effective wastewater treatment technology is becoming increasingly important. To achieve a higher effluent quality without an increase in operational costs, an increased understanding of the controlling factors of nitrogen removal is necessary. In wastewater treatment processes designed for nitrogen removal, the cost of aeration can amount to 50% of the total electrical power consumption of the plant [5]. Thus, any decrease in the amount of oxygen required to achieve nitrogen removal represents economical savings. In the last decade it has become clear that, if the oxygen concentration is carefully controlled, both nitrification and denitrification can occur under identical operating conditions by simultaneous nitrification and denitrification (SND) [6, 7]. SND is an attractive alternative technology for N-removal due to its potential to eliminate the need for separate tanks as required in conventional treatment plants, resulting in a simplified and smaller plant design [8, 9].

The naturally occurring zeolite, clinoptilolite, is a potential adsorbent of ions because of its high capacity and low cost. Structurally, clinoptilolite consists of a frame work of alumino silicates based on an infinite three-dimensional structure of SiO4 and AlO4 tetrahedra molecules linked to each other by shared oxygen [10]. These adsorbent materials have, in their internal structure, channels and cavities interconnected by molecular dimensions where there are compensation cations allowing ion exchange.

Many authors have studied the use of natural zeolites in environmental applications mainly to remove ions from wastewater by adsorption ionic exchange processes [11]. Simple ion exchange technology can usually be used as a pretreatment method, but it has rarely been tested for wastewater with a high ammonium nitrogen content due to the chemical regeneration cost of the used zeolite [12].

Based on this idea, this study was conducted to compared is crepancies in operation efficiency when powdered zeolite was directly added into SBR. The effects of powdered zeolite carrier on nitrification in the SBR under organics and nitrogen shock loading were tested. In this study, two SBRs were run in parallel to treat municipal wastewater, of which one was fed with a certain quantity of natural zeolite powder while the other was run as control system, and the aim of the study was to investigate the effect of zeolite powder addition on the performance of SBBR in treating municipal wastewater.

A natural zeolite sample used in the experiments was provided by Baiyin (Gansu Province, China), then the zeolite was ground to powder form, its main characteristics were as follows: particle size\0.25mm; true density=2.15g/ml; surface area=45.3m2/g; pore size=5nm.

The natural zeolite was washed repeatedly with 1M HCl solution and 1M NaOH solution, the wet pre-treatment material was dried at100°C, for 10h, and used in the modification stage.

Composite polyurethane foam material was prepared according to the method described in our previous work [17]. The resulting composite polyurethane foam was cut into cubes (1.0cm×1.0cm×1.0cm). The cubes were alternately eluted by 5% NaOH solution and 5% HCl to remove the soluble small molecule, then were washed with distilled water until the pH7.0 and finally dried at 60°C under vacuum. The dried cubes were then used as carrier materials.

A lab-scale sequencing batch reactores sentially consisted of a Plexiglass cylindrical vessel of 12cm diameter and 30cm height, filled with biomass support material togive 8cm according to the results obtained by Rajasimman and Karthikeyan [18], and aerated by air injection through a fine-bubble diffuser at the bottom of the reactor. The reactor was equipped with an external loop allowing wastewater recirculation via a peristaltic pump. A schematic diagram of the process configuration is shown in Figure 1. 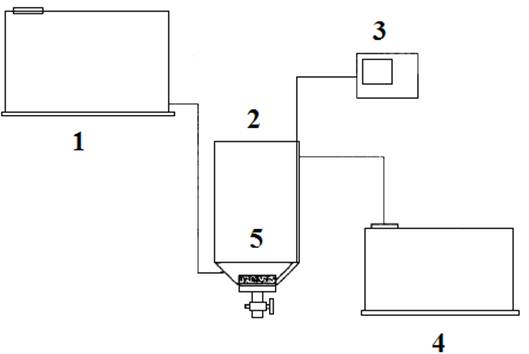 There were all two reactors, of which one reactor was run as control reactor (SBBR) and the other reactor was fed with zeolite powder astest reactor (Ze o-SBBR). The operating condition of the zeo-SBBR was the same as the control reactor. And the time schedule of each mode was as follows: feeding was 30 min, aeration was 300 min, settling was 90 min, effluent discharge was 15 min. Two SBBRs were run for 4 weeks according to above cycle procedure, and then reached the steady state. After that, the detailed research was conducted.

Where V(ml) was the solution volume and M(g) was the support mass.

Langmuir and Freundlich models were employed to fit the equilibrium data (isotherm) obtained. According to the adsorption isotherms of NH4+–N on zeolite at different temperatures, the linear experimental isotherm constants that are obtained, either Langmuir or Freundlich, fit well the data obtained with correlation coefficient values of r2=0.9538 and 0.8878, respectively. Yet the Langmuir model showed better adjustment, which appears to indicate a monolayer adsorption mechanism.

The type of adsorption can be determined through thermodynamic quantities as △Hads and △S [20]. The adsorption process is composed of two contributions, i.e., enthalpic and entropic, which characterize whether the reaction is spontaneous or not. From the Langmuir isotherm model, adsorption heating of NH4+–N on to zeolite can be calculated from the temperature dependence of the equilibrium adsorption constant(k) by the Clausius–Claperyon’s equation.

A plot of log k versus 1/T should be linear with slope -△H /2.303R and with intercept △S/2.303R. These quantities are related via

Examination of the adsorption isotherms revealed that △Hads and △S values calculated by the Langmuir equilibrium constants were approximately equal to 2.051 J·mol-1, 0.01979 J·K-1, when △Gads values were -3.846 kJ·mol-1, -4.035 kJ·mol-1, and -4.242 kJ·mol-1 at 25, 35 and 45°C, respectively. The positive △H values implied that the adsorption process was endothermic in the present system. At the three different temperatures, the △Hads values were lower than the limit of chemisorption of 42.0 kJ·mol-1, it means that the sorption of NH4+–N on zeolite was affected by physisorption rather than by chemical bonding. However, the free energy values (△Gads) appeared to be very small and negative, indicating that the reaction was spontaneous.

3.2. Mechanism and Role of the Zeolite in the SBBR

Fig 2 shows the IR spectra of immobilized microorganisms carrier, where the carrier have four strong absorption peaks between 1000cm-1 and 3500-1 corresponding to the symmetric stretching of –OH, C-H, -C= and N-H.

The carrier contains functional groups such as —OH, —COOH, —CONH2, and —NH2, which may facilitate the micro-organism immobilization process by the linking and adsorption process between carrier and microorganism under mild conditions [21,22]. Furthermore, the carrier that had internal aerobic and anoxic zones as well, and could immobilize micro-organism effectively, and the efficiency of simultaneous removal of carbon and nitrogenous compounds will be much higher in the same environmental conditions. 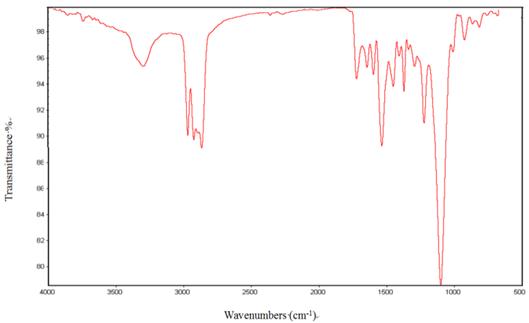 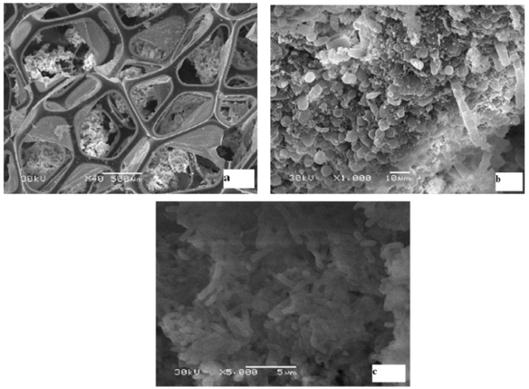 As the powdered zeolite was added into the SBBR, microorganisms that were attached on the surface of zeolite or were entrapped in the powdered zeolite particles formed zeolite-flocs, as shown by scanning electron microscopy (SEM) (Figure 3). These zeolite-flocs enhanced the settle ability of microbial floc due to the higher specific gravity of zeolite. The zeolite-flocs adsorbed ammonium nitrogen during the anoxic fill phase. At the same time, denitrification was active in this phase with biodegradable organics. The adsorbed ammonium nitrogen was released into the liquid phase due to the chemical equilibrium, and transformed to oxidized nitrogen by nitrifiers during the aeration mixing phase. Thus, zeolite-flocs can play an important role in ammonium removal in the SBBR.

Time series samples were taken during steady operation for measurement of NH4+-N, NO3−-N, NO2−-N, TN, and COD through the course of the test.

According to Fig. 4, NH4+-N kept almost stable at first 40 min and then reduced to 2.4 mg/L at the next 90 min in SBBR reactor. For Z-S reactor, NH4+-N quickly reduced from 25 mg/L to 17.8 mg/L at the first 40 min, while the content of (nitrate + nitrite) increased was negligible at this period. Therefore, the reduction of NH4+-N should be attributed to the adsorption and ion exchange of zeolite powder for NH4+-N. 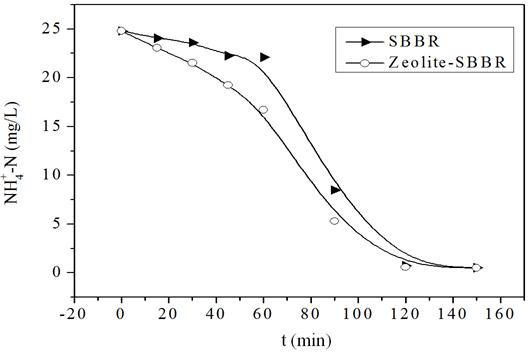 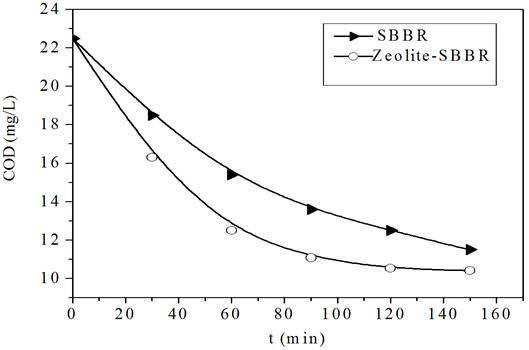 Fig. 5. COD profiles for one cycle in SBBR and Zeolite-SBBR.

According to Fig. 5, COD decreased from 22.5 mg/L to 11.5 mg/L at a time period of 150min in S reactor, while it last 80 min for Z-S reactor. COD reduced in a linear way at the first 40min for two SBBRs. Large quantities of COD were adsorbed and/or up taken on activated sludge in the anoxic phase. After aeration (2.5 h), COD in the test reactor was decomposed to a low level. 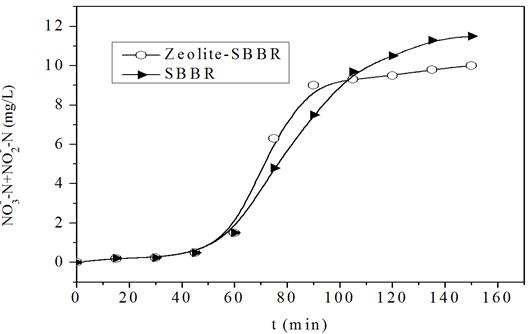 Fig. 6. Nitrate and nitrite(nitrite+nitrate) profiles for one cycle. 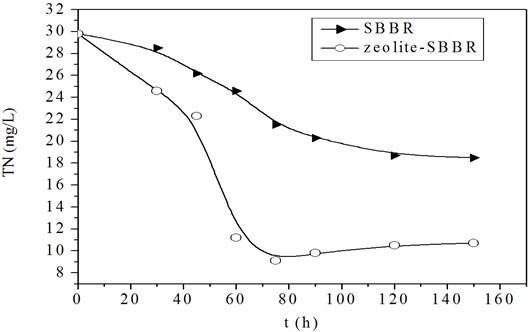 Fig. 7. TN profiles for one cycle.

It can be seen from Fig.7 that TN decreased from 30.1mg/L to 18.6mg/L in 150 minin Zreactor, while in Z-Sreactor TN decreased by 9.8mg/L which is about equivalent to the amount of NH4+-N reduction in the first 30min, and then TN was reduced to 9.3mg/L at the aeration time point of 80min. During the period of 80-150min, it was found that the TN rose to 10.1 mg/L with the extension of aeration, and the amount of (nitrate+nitrite) was detected to have arise, whereas, it was found there was no NH4+-N left in the reactor; therefore, it can be concluded that the NH4+-N adsorbed by zeolite powder was nitrified by nitrobacteria. Compared to the Zreactor, there has a higher TN removal in Z-Sreactor, which should be attributed to the enhanced simultaneous nitrification and denitrification (SND) took place in Z-S reactor. For the addition of zeolite powder is helpful to the formation of granular sludge with characteristics of bigger size [23,24], which created an appropriate environment for SND.

(1)  The addition of zeolite powder could improve the activity of the activated sludge in SBR reactor, the SOURs of the tested sludge were enhanced significantly, and COD, NH4+-N, TN and TP could be removed in a shorter cycle time.

(2)  The addition of zeolite powder could also improve the nitrification rate and settling property of activated sludge, which is helpful to inhabit the sludge bulking and to enhance the performance of biological nitrogen removal.

(3)  Through long-term parallel shock loadtest, it was found that the addition of zeolite powder could enhance the ability of activated sludge inresisting the shock load of organics and ammonium.

We are grateful for the open fund for Key Laboratory of Eco-Environment-Related Polymer Materials (KF-13-02) and the scientific research innovation fund for principal of Lan Zhou City University in 2014 (LZCU-XZ2014-11).