UV radiation produces photoproducts in DNA. As indicated above, both cyclobutane pyrimidine dimers and (6-4) adducts are formed [1-6]. The most common lesions are cis-syn cyclobutane pyrimidine dimers [4], in which the bases preserve their original orientation relative to the sugar-phosphate backbone [7]. Cyclobutane pyrimidine dimers and (6-4) adducts cause substutution mutations [8-19], frameshifts [11,20,21], and complex mutations [22]. Only a few photodimers result in mutations, while more than 90% of these lesions do not [9]. Frameshift mutations are the structural DNA changes wherein one DNA strand becomes shorter or longer than the other as a result of a deletion or insertion of a number of nucleotides that is not divisible by three [23]. The point mutation rate of phage ΦX174 was determined [24]. One nucleotide deletions appear most often [25]. Frameshift mutations may be targeted and untargeted types [26]. Mononucleotide runs are hot spots for frameshift mutations in mismatch repair (MMR)-deficient cells. Frequencies of frameshift mutations increase as a function of the number of reiterated base pairs at DNA sites [27]. Both the length of a mononucleotide microsatellite and its sequence context influence mutation rate in defective DNA in mismatch repair (MMR)-deficient cells [28]. Ultraviolet radiation C (UVC) or reactive oxygen species-induced CC to TT tandem mutations is markedly enhanced in MMR-deficient cells. CC to TT tandem mutations in MMR-deficient cells form more readily in a homocytosine run than in a sequence limited to two cytosines [29]. The deletion frequency increases with repeat length, decreases with the distance between repeats [30]. The Y-family DNA polymerase Dpo4 make single-base deletion errors at high frequencies in repetitive sequences, especially those that contain two or more identical pyrimidines with a 5′ flanking guanosine [31].

The postreplicative mismatch repair (MMR) system is important for removing mutational intermediates that are generated during DNA replication, especially those that arise as a result of DNA polymerase slippage in simple repeats [32]. Both replication fidelity and MMR are affected by the microsatellite's nucleotide composition [33]. PCNA and RPA suppress large deletion errors by preventing the primer terminus at a repeat from fraying and/or from relocating and annealing to a downstream repeat [34]. DNA polymerase IV uses a template slippage mechanism to create single base deletions on homopolymeric runs [35]. DNA polymerase IV, which creates single-base deletions, prefers to extend slipped DNA substrates with the skipped base at the −4 position [36]. Overexpression of enzymes of the base excision repair pathway is known to increase the frequency of frameshift mutations [37]. Human polymerase kappa uses a classical Streisinger template-slippage mechanism to generate −1 deletions in repetitive sequences, as do the bacterial and archaeal homologues [38,39]. Frameshift-inducing mutagens can selectively induce mutations in mismatch repair-deficient cells versus mismatch repair-proficient cells. Environmental exposures may, therefore, favor development of cancers with microsatellite instability in tissues like the gut [40]. Cancer-associated mutations in cancer genes constitute a diverse set of mutations associated with the disease.

The Streisinger model [41] is now the best-grounded model of frameshift mutations [42-44] suggesting gaps and DNA strand slippage during synthesis as the causes of mutations. It is shown that deletions formation due to the appearance of template bases looped-out as a bulge [44]. The second model [45,46] states that certain (

1)-frameshiftsare initiated by a nucleotide misincorporation. The model [46] has been confirmed [38,48,49]. Functional studies and information on the structures of DNA polymerases allow refinement of Streisinger's original hypothesis and offer possible explanations for why misalignment error rates during DNA synthesis can vary by 10,000-fold, depending on the DNA polymerase and the nucleotide composition, symmetry, and location of the synthesis error [47]. Two distinct mechanisms contribute to slipped misalignments: simple replication misalignment events are sensitive to DNA polymerase III exonuclease, whereas SCE-associated events are sensitive to exonuclease I [43]. It is proposed two mechanisms for palindrome-stimulated spontaneous deletion [50]. It is presented evidence for three mechanisms of RecA-independent sequence rearrangements: simple replication slippage, sister-chromosome exchange-associated slippage, and single-strand annealing [50]. However, the models [27,41,45,46] fails to explain how cis-syn cyclobutane pyrimidine dimers result in frameshift mutations and why these lesions cause nucleotide substitutions in some cases and frameshifts in other ones.

Modified or specialized DNA polymerases incorporate canonical bases capable of forming hydrogen bonds with dimerized bases in template DNA [64]. Error-prone DNA synthesis proceeds the same way as error-free synthesis. When a canonical nucleotide cannot be added opposite to a cyclobutane pyrimidine dimer so that the opposite bases are hydrogen bonded, specialized or modified DNA polymerases leave a one-nucleotide gap. For instance, this is the case when an abasic site occurs in the template, leading to one-nucleotide deletion [25]. 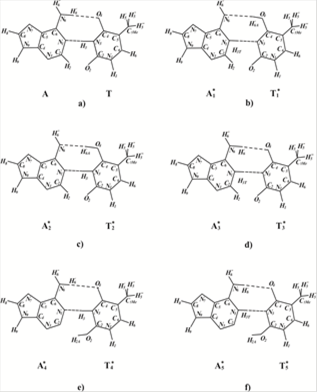 Frameshift mutations most commonly arise in DNA sites with a homogenous nucleotide composition, such as monotonous runs of G-C or A-T pairs. Five rare tautomeric forms are possible for thymine (Fig. 1) [63]. The forms are stable when the respective bases are involved in cyclobutane thymine dimers [63,64]. This is because the DNA strand bends once pyrimidine dimers arise, and the hydrogen bonds between the bases are broken between the bases that neighbor the cyclobutane pyrimidine dimers [4,98,101]. Consider a DNA site with a homogenous nucleotide composition wherein one strand contains cis-syn cyclobutane dimers TT2* (Fig. 1). One base of the dimer is a canonical thymine (T), and the other is the rare tautomeric form T2* (Fig. 2a). The question is how deletions of one or more nucleotides can form in this case. Let us the site is replicated by error-free DNA polymerases. In result a post replicate gap may appear opposite cyclobutane dimers (Fig. 2b). Let us the post replicate gap is replicated by specialized or modified DNA polymerases in result error-prone or SOS synthesis. 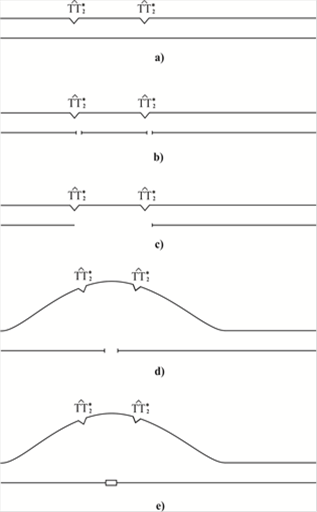 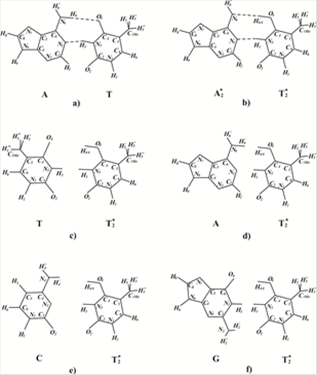 A one-nucleotide gap arises opposite to a cis-syn cyclobutane dimer TT2* (Fig. 2b) as a result of translesion synthesis driven by modified E. coli DNA polymerase III or mammalian DNA polymerase δ or ε or specialized (mammalian Pol η or Pol ζ or E. coli DNA polymerase IV or V) DNA polymerases. As was demonstrated experimentally, such a gap arises during DNA synthesis when the template contains an abasic site, leading to a one-nucleotide deletion [25]. The site in nascent DNA strand may be lost (Fig. 2c) because a bend forms in the site containing cyclobutane pyrimidine dimers and the hydrogen bonds between the bases are broken [4,98,101]. A DNA site containing the cis-syn cyclobutane dimers TT2*, may form a loop as shown in Figure 2e. The resulting smaller gap is usually filled in by constitutive DNA polymerases (Fig. 2f), leading to the precipitation of several bases (deletion formation). 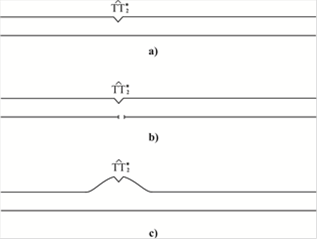 Thus, cis-syn cyclobutane thymine dimers wherein one or both of the bases occur in the rare tautomeric states that prevent their hydrogen bonding with canonical DNA bases are a possible source of frameshift mutations and, in particular, deletions. The above mechanisms of deletions formation agree with the models [27,41,45,46].